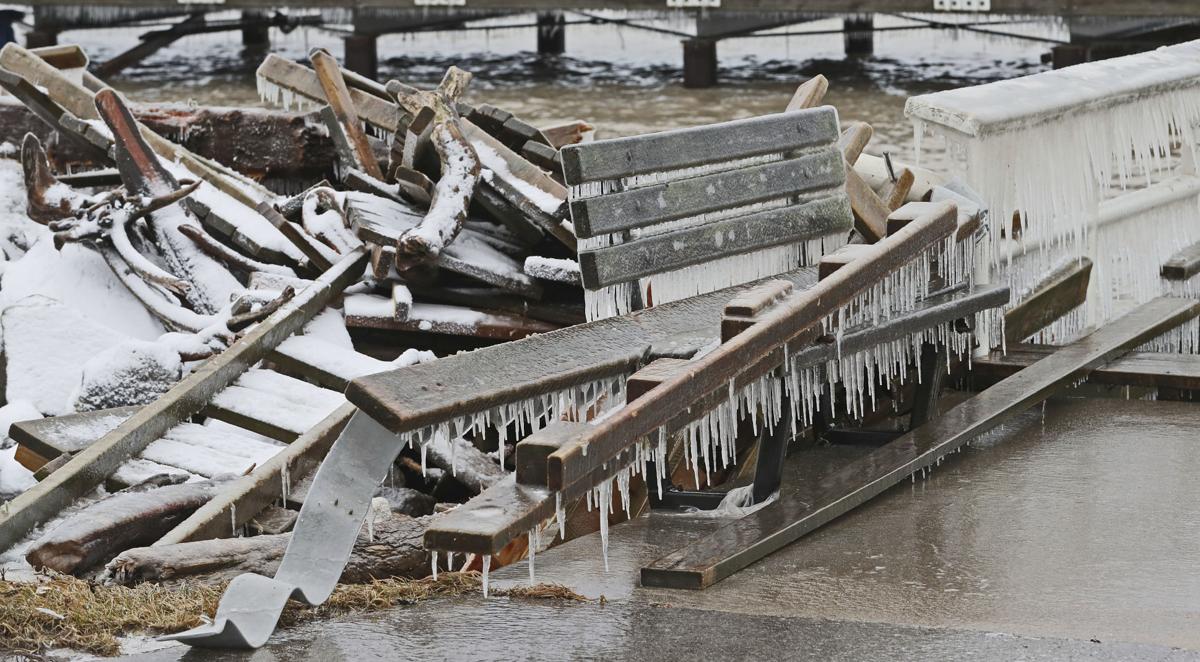 Piers at the South Shore Yacht Club in Milwaukee are damaged after high winds from the recent storms pushed water ashore. 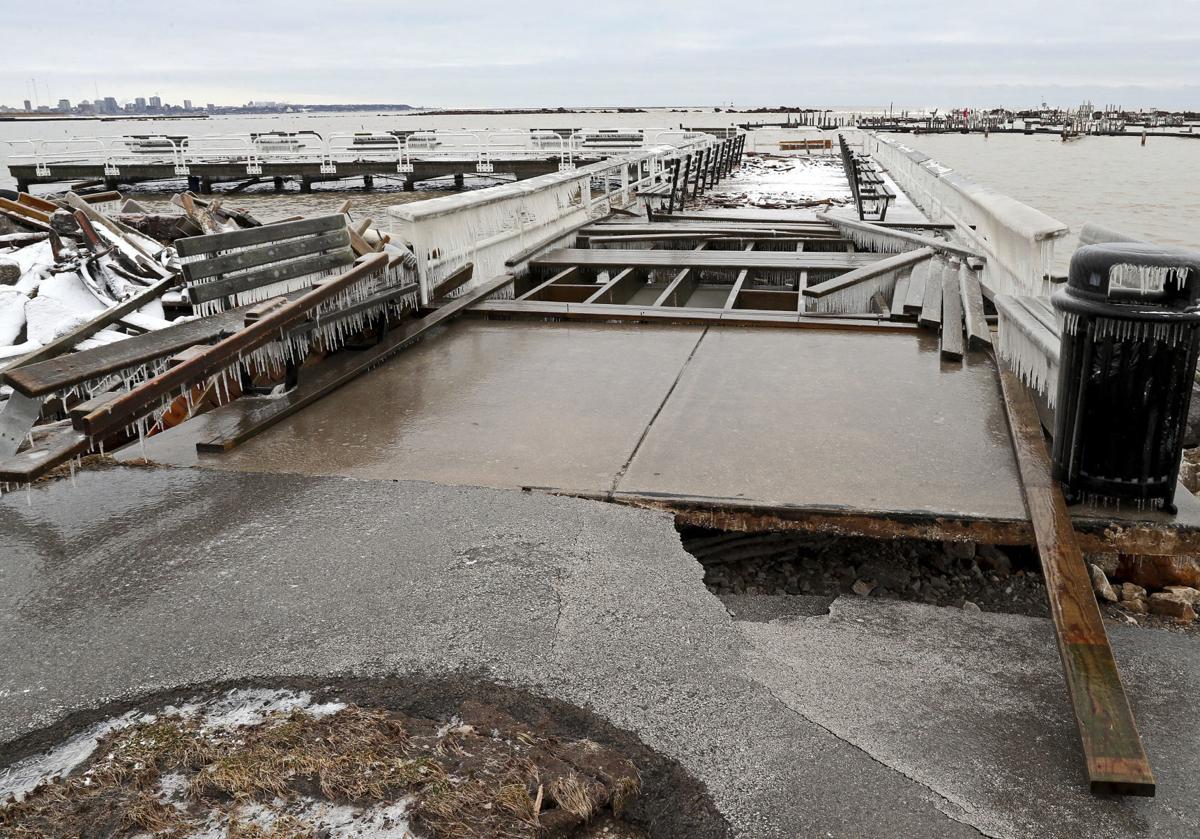 High winds from the recent storms pushed water ashore doing damage to the pavement at the McKinley Marina boat launch along Milwaukee's lakefront.

A warning sign is covered by ice at Clark Square in Evanston, Ill., Sunday.

City of Greenville, Miss., trucks and employees, work to clean up debris Saturday from a storm along Main Street.

Icy roads, deadly tornadoes, punishing waves — severe weekend weather has been blamed for 11 deaths and major damage in parts of the Midwest, South and Northeast.

Winds gusted up to 50 mph, and waves reached 6 to 8 feet high. Schlicht said the port’s international docks, which are closed for the season, sustained “significant damage.”

Floodwaters reached 3 feet on some parts of Jones Island under the Hoan Bridge. Flooding was receding Sunday, and the inner harbor was expected to reopen early Monday.

The Madison area escaped the brunt of a powerful storm Saturday that tracked more to the south than expected, but more snow was expected Sunday night and Monday night, according to forecasters. By Sunday morning, all Madison streets had been plowed and a snow emergency that had been expected to continue into Monday was canceled.

But in the South and the Northeast, tens of thousands remained without electrical power Sunday as a result of storms a day earlier. Officials in far-flung locations were assessing the damages while utility crews worked to restore power.

The storms toppled trees, ripped off roofs and, in some areas, reduced buildings to rubble.

The National Weather Service said it was a tornado packing winds of at least 134 mph that hit Alabama’s Pickens County on Saturday, killing three people.

“I could hear everything just coming apart,” Larry Jones, standing amid rubble , said in a video posted by The Tuscaloosa News.

“This morning, I have reached out to both the county leadership as well as the legislative delegation to offer my deepest condolences in this terrible loss of life,” Ivey’s statement said.

In northwestern Louisiana, three fatalities were blamed on high winds. A man in his bed in Oil City, Louisiana, was crushed to death by a tree that fell on his home early Saturday. A couple in nearby Bossier Parish were killed when the storms demolished their mobile home. The National Weather Service said a tornado with 135 mph winds hit the area.

In Lubbock, Texas, two first responders were killed when they were hit by a vehicle at the scene of a traffic accident on icy roads. In Iowa, where a semitrailer on Interstate 80 overturned, a passenger was killed in similar road conditions.

Near Kiowa, Oklahoma, a man drowned after he was swept away by floodwaters, the Oklahoma Highway Patrol said.

High winds and icy weather were factors in power outages affecting tens of thousands of people in the South and the Northeast. The PowerOutage.US website, which tracks outages, reported more than 11,000 outages in New York as of Sunday evening. Outage numbers were falling but there remained more than 10,000 people and businesses without power in West Virginia; roughly 17,000 in the Carolinas; 14,000 in Alabama; 20,000 in Mississippi, and 12,000 in Arkansas.

Entergy Corporation said its subsidiaries serving Arkansas, Louisiana, Texas and Mississippi were working to restore power to roughly 30,000 Sunday, mostly in Mississippi and Arkansas. That was down from a peak of 134,000 outages in the entire Entergy system.

While most service was expected to be restored later Sunday, some in areas of Arkansas and Mississippi with extensive damage might take longer, said spokeswoman Lee Sabatini.

“They have had extensive infrastructure damage,” Sabatini said of those two states.

For some, it was just the latest outbreak during months of extreme weather .

The storm system spawned a tornado Saturday near Tazewell, in northeast Tennessee, for the second time in less than three months. The National Weather Service said on Twitter that it appeared to have maximum winds of 65 mph. No injuries were reported.

A tornado with 80 mph winds touched down in Tazewell on Oct. 31.

Snow emergency declared in Madison, alternate side parking in effect through Monday

Between 1 a.m. and 7 a.m. Sunday, vehicles must be parked on the even numbered side of the street.

The powerful system has tracked a little southeast of what was expected, which means not quite as much snow for south-central Wisconsin while a heavy blow falls on southeast Wisconsin, according to forecasters.

A winter storm system that spanned the Midwest and parts of the southern U.S. brought freezing rain, ice and hazardous road conditions to Madison Friday.

Menace of powerful 2-wave snowstorm grows for southern and eastern Wisconsin. See how much will fall and when

The storm will hit Friday night and then again Saturday afternoon into the night, delivering ice and heavy snow to southern and eastern Wisconsin, with only the far northwest portion of the state totally escaping the impact, according to forecasters.

Snowstorm set to deal much heavier blow to southern Wisconsin than originally forecast. See how much will fall and when

Several inches are possible in many locations in what is developing to be a storm packing a double punch Friday night through Saturday night, according to forecasters.

Light snow and freezing drizzle is expected overnight into Tuesday morning, with Thursday the only day all week without precipitation chances, according to forecasters.

The exact track of the system and temperatures will determine who gets wintry mix and who gets all snow, and how much, according to forecasters.

But don’t look for the horrific, record cold that punished Wisconsin and the Upper Midwest last winter, according to forecasters.

An emergency declaration positions the city of Racine to be able to ask for state and federal assistance.

Cold Thursday giving way to ice, big snowstorm Friday into Saturday for Wisconsin. See what will fall and where

The track of the storm will determine which areas get the most snow and which get less snow with more ice, according to forecasters.

“This is something I’ve never seen before, and I’ve been in this community my entire life,” Racine Public Works Commissioner John Rooney said about the weekend storm damage to Racine’s lakefront.

Piers at the South Shore Yacht Club in Milwaukee are damaged after high winds from the recent storms pushed water ashore. 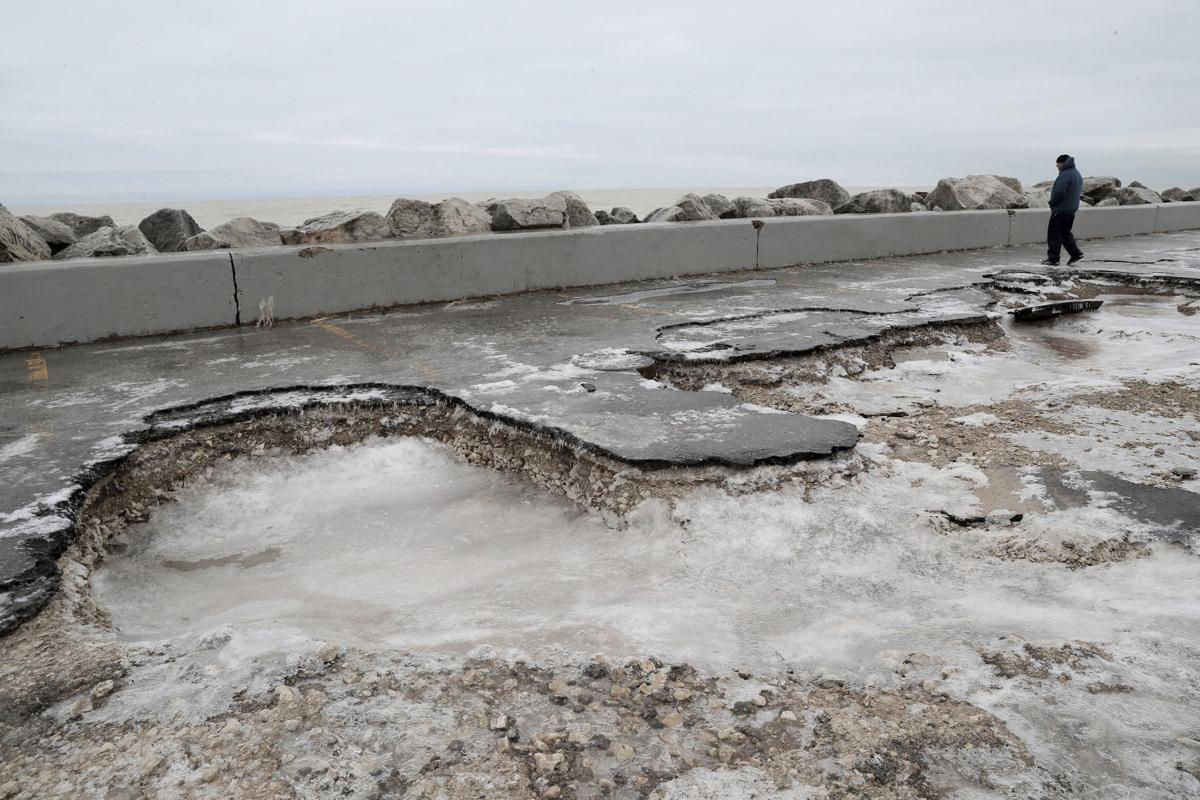 Pavement at the McKinley Marina boat launch along Milwaukee's lakefront is damaged as a result of recent storms.

Severe storms sweeping across parts of the U.S. South were blamed for deaths and destruction, Saturday, including the damage to this downtown Greenville, Miss., home.

High winds, tornadoes and unrelenting rain Saturday battered a large area of the South, including damages to a number of downtown Greenville, Miss., businesses.

High winds from the recent storms pushed water ashore doing damage to the pavement at the McKinley Marina boat launch along Milwaukee's lakefront.

High winds from the recent storms pushed water ashore, doing damage to the pavement at the McKinley Marina boat launch along Milwaukee's lakefront Sunday. Winds gusted up to 50 mph, and waves reached 6 to 8 feet high.

Branches are covered with ice Sunday in Evanston, Ill. Pounding waves and steady rain brought by a winter storm Saturday forced the closure of parts of Lake Shore Drive and South Shore Drive due to flooding.

A warning sign is covered by ice at Clark Square in Evanston, Ill., Sunday.

Severe storms sweeping across parts of the U.S. South were blamed for deaths and destruction, including this toppled tree near downtown Greenville, Miss., Saturday.

City of Greenville, Miss., trucks and employees, work to clean up debris Saturday from a storm along Main Street.