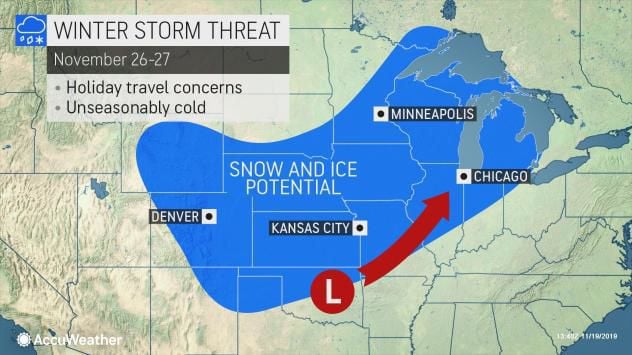 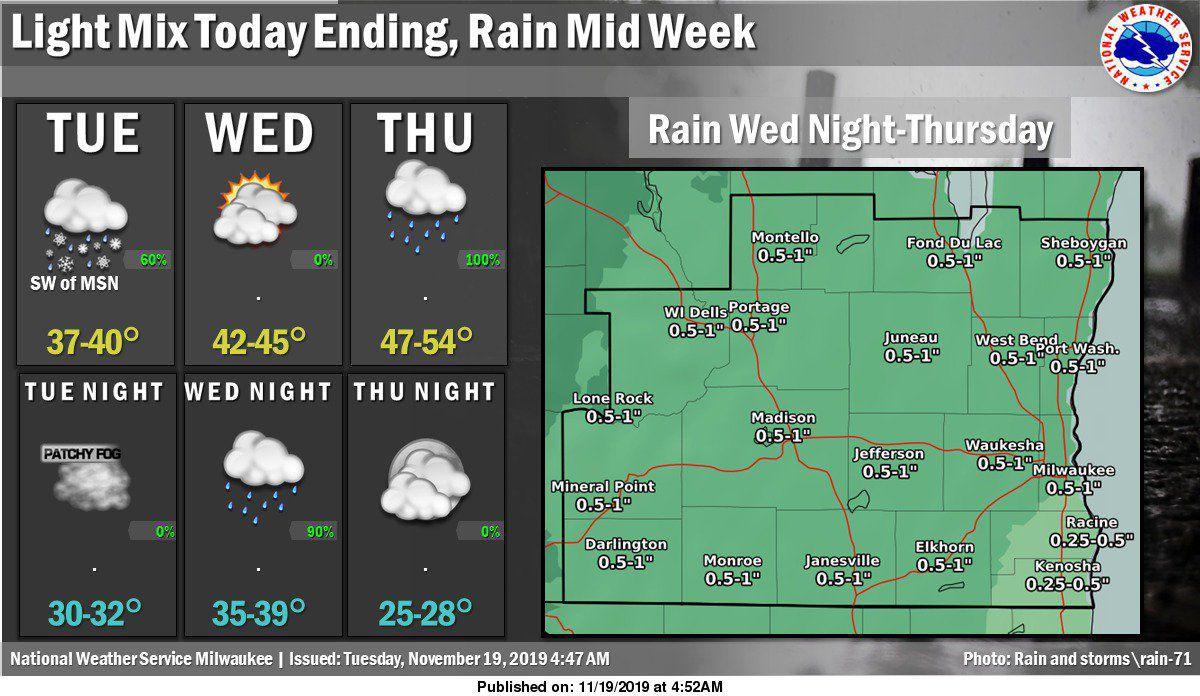 It will be warmer and wet for the next few days across south-central Wisconsin, with more than an inch of rain possible and highs cracking 50 on Thursday, according to forecasters.

But the major weather news is that a big snowstorm could disrupt travel for millions on the days leading up to Thanksgiving, AccuWeather said.

The storm is likely to regroup over the central and southern Rockies next Tuesday to Wednesday, with potentially heavy snow and substantial travel delays for a nearly 1,000-mile stretch of the heartland from eastern Colorado and northeastern New Mexico to parts of Wisconsin, Minnesota, and Michigan as Thanksgiving travel surges next Wednesday, AccuWeather said.

The same storm is likely to produce locally heavy rain and thunderstorms on its warm side over the southern Plains and the lower Mississippi and Ohio valleys by the middle of next week.

On Tuesday, a light wintry mix of snow, rain and freezing rain may push through south-central Wisconsin during the morning. Any accumulations of snow or ice will be light, but enough to cause slippery stretches on roads, the National Weather Service said.

The high in Madison should be near 40, with winds developing of the southwest around 5 miles per hour.

After an overnight low around 32, rain will move in later Wednesday, with a half to three-quarters of an inch possible Wednesday night and a quarter- to half-inch possible Thursday.

The high Wednesday should be near 45, with winds developing out of the southeast at 5 to 10 mph in the morning, the low Wednesday night is expected to be around 38 as south winds gust to 30 mph, and the high Thursday near 51, with winds again gusting to 30 mph and turning out of the northwest in the afternoon.

The weather should turn quiet after the storm moves out into early next week, with no chances for precipitation through Monday, according to the Weather Service.

Skies over Madison should be mostly sunny Friday through Sunday, and partly sunny Monday, with highs near 35, 39, 43 and 43, and lows Thursday night through Sunday night around 27, 25, 28 and 31.

27 Storm Track Forecast from Meteorologist Max Tsaparis forecasts a light mix of snow and rain ending by late morning Tuesday, rain developing Wednesday night and continuing into Thursday, then cooler and dry into early next week.

Officially, a trace of snow was recorded at the Dane County Regional Airport on Monday, keeping Madison’s November total at 7.6 inches, 6.4 inches above normal. For meteorological fall (September through November) and the snow season (since July 1), Madison’s total stayed at 15.7 inches, 14 inches above normal.

Photos: Looking back at the "polar vortex" of 2014

Photos: A look back at the frigid blast of 2014 caused by the 'polar vortex'

Upper Midwest looks to have snowy winter, but polar vortex may not impact region

The National Oceanic and Atmospheric Administration's Climate Prediction Center and AccuWeather both have released their weather forecasts for the meteorological winter months of December, January and February.

Madison's largest high school is asking teachers of required ninth grade classes to work toward grading assignments at no less than 40%, among other changes.

The center is scheduled to open early summer 2020 and will operate seven days a week from noon to 4 a.m., staffed by mental and behavioral health care professionals.

U.S. Sen. Ron Johnson has been involved in several meetings and conversations that could provide key details about the president's involvement in the Ukrainian saga that set off the impeachment inquiry.

Agrace to open secure hospice unit for people with dementia

Rain on the way for south-central Wisconsin could cause flooding; potential blizzard still looms next week

Moderate to heavy rainfall for the area Wednesday night and Thursday will result in rising rivers and streams, with some possibly reaching flood stage Friday and into the weekend, according to forecasters.

A second scenario has the storm moving faster and a little more south, easing impacts here, but still disrupting travel for millions on the busiest travel day of the year Wednesday.

After a rainy Thursday, quiet weather is in store for the area in advance of next week’s possible big storm, forecasters say.

Will it be snow or rain when powerful system hits south-central Wisconsin Tuesday into Wednesday?

Some forecasters are calling for heavy snow, others for heavy rain for the area, with the storm’s track still not certain and the Madison area right in the rain-snow boundary area.

Big snowstorm to hammer Wisconsin north and west of Madison area. See how much will fall and when

While south-central Wisconsin will see mostly rain, anyone traveling to the north and west of Madison in advance of Thanksgiving will run into a major snowstorm, according to forecasters.