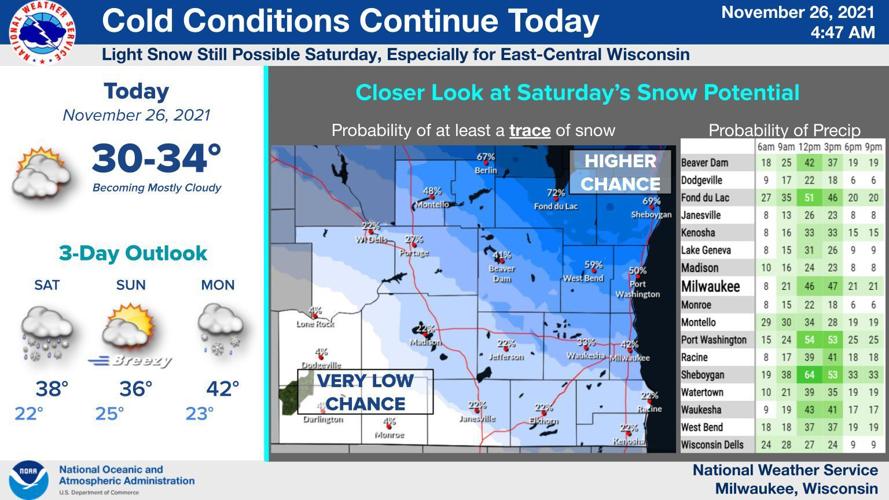 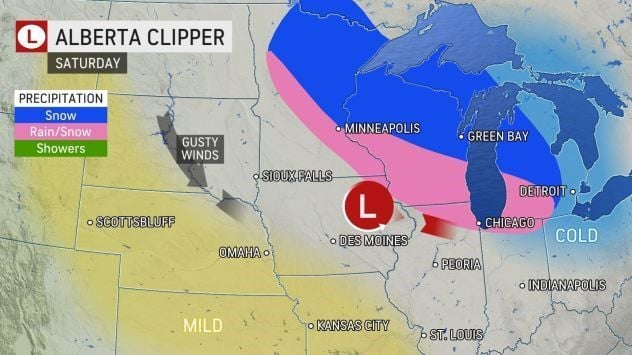 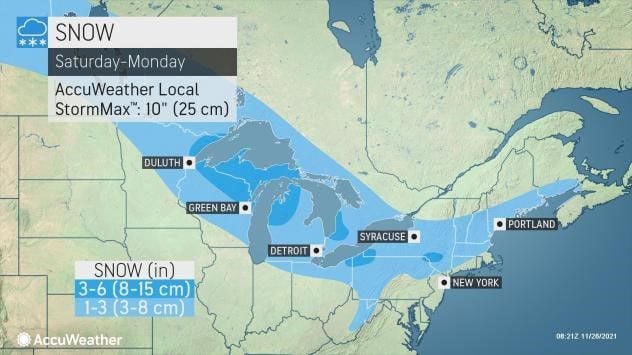 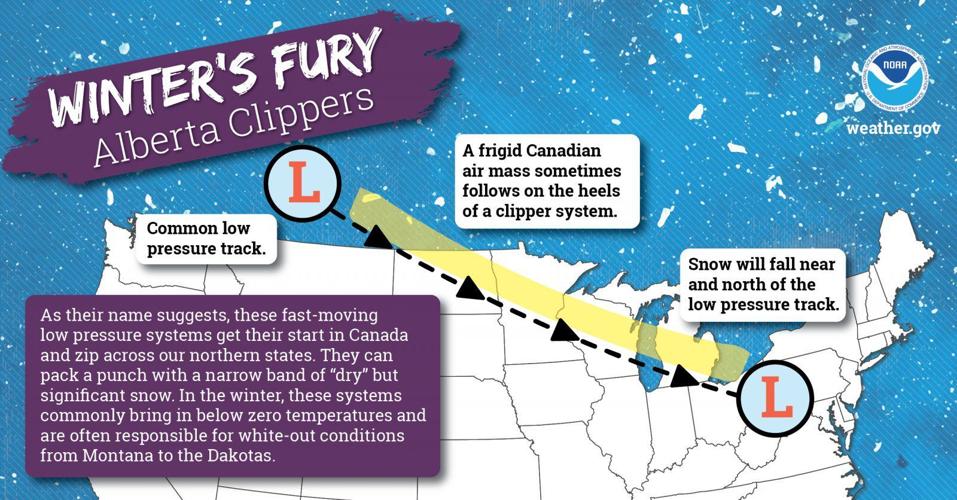 An Alberta Clipper will deliver snow north and east of the Madison area on Saturday, but south-central Wisconsin is unlikely to see accumulating snow, according to forecasters.

Stormy weather will begin to develop Friday night as the Alberta clipper dives out of Canada and reaches the northern U.S., spreading a stripe of snow from Minnesota to Illinois during the day, though highs in the upper 30s may cause snow to struggle to accumulate in any significant fashion, AccuWeather reported.

Light accumulations are possible to the northeast of the Madison area, with the heaviest totals in northern Minnesota, northern Wisconsin and then northern Michigan, according to AccuWeather.

The National Weather Service said the probability of at least a trace of accumulation on Saturday is just 4% in Dodgeville, 22% in Madison, 33% in Waukesha, 42% in Milwaukee, 69% in Sheboygan, and 72% in Fond du Lac.

In Madison on Friday, look for mostly cloudy skies, a high near 32 and west winds at 5 to 10 miles per hour turning out of the south in the afternoon.

After an overnight low around 23, Saturday’s forecast features a 20% chance for snow after 9 a.m., mixing with rain after 10 a.m., cloudy skies gradually becoming mostly sunny, with a high near 40 and south winds at 5 to 10 mph turning out of the northwest in the afternoon.

After a low overnight Saturday into Sunday around 27, Sunday should be mostly sunny, with a high near 37 and northwest winds at 10 to 15 mph.

The Weather Service predicts a warming trend next week with no chance for precipitation.

Skies over Madison should be partly sunny Monday through Wednesday and mostly sunny Thursday, with highs near 43, 42, 42 and 48, and lows Sunday night thought Wednesday night around 25, 28, 26 and 32.

More stories from the greatest single-day snowstorm in Madison history

Read more stories from the Wisconsin State Journal archives about the blizzard that dropped a record 17.3 inches of snow on Madison in a single day on Dec. 3, 1990.

Two houses and a vehicle were struck in gunfire incidents on the Southwest and North sides on Thanksgiving, Madison police reported.

Nine people were injured in north-central Wisconsin when a vehicle rear-ended an Amish buggy at "highway speeds," authorities said.

The Springhaven Pagoda was built by a former Madison mayor to shelter a natural spring along the shore of Lake Monona.

Family diner in Cambridge offers respite for regulars during the holidays

“I’ve been serving turkey dinner for the people here since year one, every Thanksgiving,” diner owner Arsim Ahmadi said. “We have here in Cambridge a lot of older people. They don’t have a place to go, so that’s the reason I do it.”

Whether it's speaking to the Badgers in the hotel the night before games or beating opponents' double teams, Jake Ferguson is becoming a more complete leader and player.

Before the Axe, Minnesota and Wisconsin played for the Slab of Bacon

The Slab of Bacon was a wooden carving that debuted in 1930 and was presented through 1943. The Gophers were 11-3 in those games.

Wisconsin at Minnesota football: 3 keys to victory, why the Badgers D-line must shine and predictions

Paul Bunyan's Axe is on the line. So is a spot for the Badgers in the Big Ten title game. We offer keys for both teams and predict a winner.

The Talmud says, when you save one life you save the world. How true it is.

State Journal beat reporter Abby Schnable shares her takeaways from the Maui Invitational and discusses how the Badgers men's basketball season outlook may have changed.

Victories against Nebraska on Friday and Indiana on Saturday would clinch the crown.

The UW-Nebraska series has the main elements of every good rivalry: the teams are always good and there’s always a lot at stake when they meet.

After an emotional loss in last season's NFC title game in which he was injured, Aaron Donald is back to full strength and eager for Sunday's key game at Lambeau Field between his Rams and the Packers.