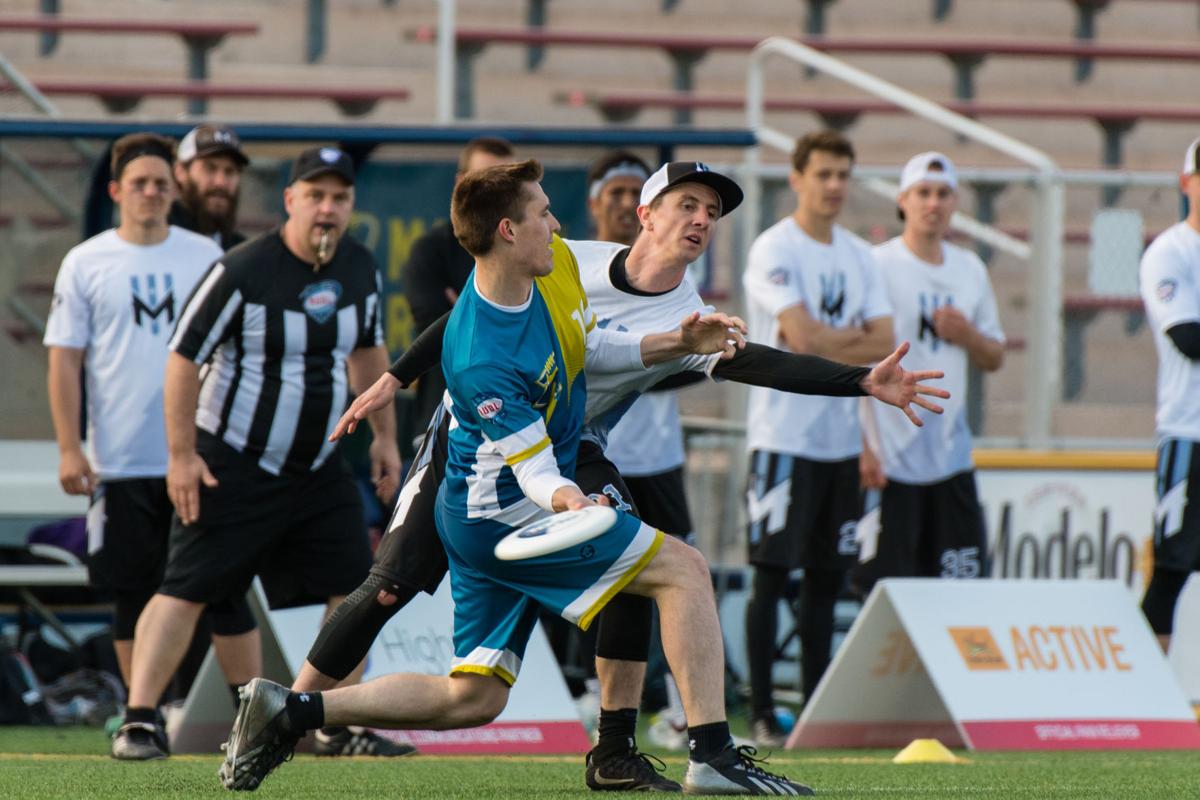 “I'm a competitive guy and I'm just trying to keep playing some sport that scratches that itch until I can't anymore,” Sterling Knoche, with disc, said. 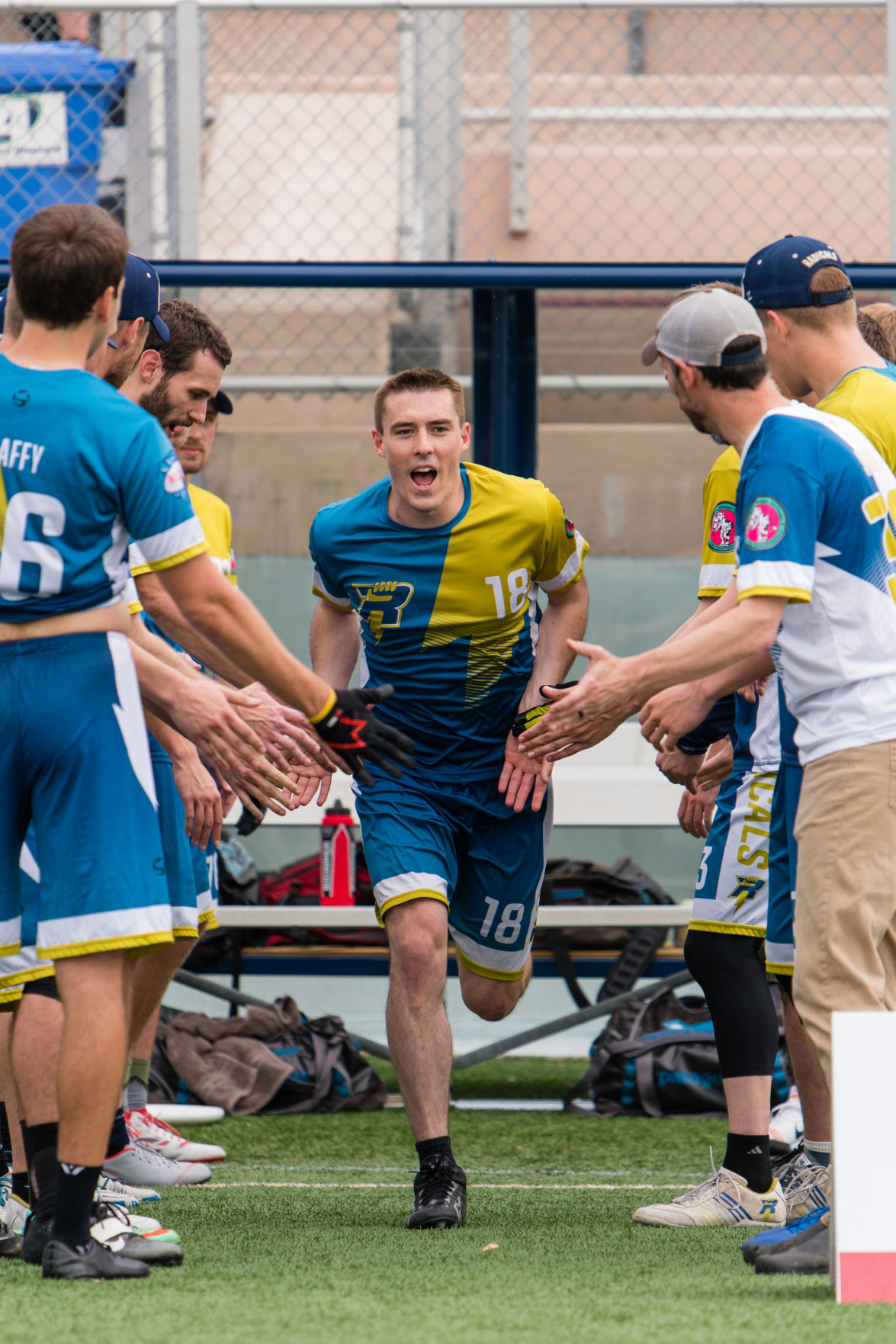 Sterling Knoche is a intern at a Madison law firm on Capitol Square.

BRETT A. SOMMERS For the State Journal

MADISON — Sterling Knoche hurriedly donned his cleats in the back of a Minnesota Uber, traveling somewhere between Minneapolis and St. Paul.

The driver, excited to have an athlete in his ride, asked if the Madison Radicals defender had a game in town.

Knoche landed in Minneapolis at 6:15 p.m. on an inbound flight from Madison moments before. He was hustling to reach his American Ultimate Disc League game after working a full shift as an intern at Axley Attorneys, the downtown Madison law firm on Capitol Square.

“He was very disappointed when he found out I played ultimate,” Knoche said.

The pair grew from children to young adults on Madison’s South Hill Drive but had contrasting athletic careers. Johnson was always the Frisbee buff, adopting the sport well before high school.

Knoche was the traditional standout athlete, raised in the home of a high school basketball coach. He played cornerback and captained his Madison West football team, covered center field in baseball and excelled in swimming, competing at the WIAA state meet all four years of high school.

Knoche was a natural, even if he wasn’t sure how to throw a disc. He could run. He could jump. He could catch. But even after a fun-filled high school season, Johnson had to drag Knoche to tryouts for the Wisconsin Hodags — the UW-Madison club team — when the pair arrived on campus.

When the captains called Knoche to inform him he made the team, he was ready to turn the spot down if Johnson hadn’t made it, too.

They both got the call.

“He played four years, and I played five years (at UW), but it still was never fully part of his life,” Johnson said.

If Knoche didn’t quite realize his growing passion for ultimate disc while playing club teams, the combination of joining the Radicals in 2017, winning an AUDL championship in 2018 and beginning UW law school in 2019 each helped cement his commitment.

“I’m a competitive guy and I’m just trying to keep playing some sport that scratches that itch until I can’t anymore,” he said.

Knoche watched former teammate Patrick Shriwise earn a doctorate in nuclear engineering and current teammate Victor Luo do the same in statistics. There was no push coming to shove, Knoche would find a way to further his education and play at a high level.

“I felt like I could try to swing it with law school,” he said. “I’ll keep trying to play until other parts of life finally get in the way where I can’t.”

Knoche hasn’t hit any obstacles yet.

He plans to graduate from UW law school in 2022 and potentially practice municipal law thereafter.

Juggling legal briefs and a disc are far from easy. Morning practices. Evening practices. Games on Fridays, Saturdays or Sundays — and sometimes a combination on various weekends. Not to mention scheduling around his required hours at the firm.

Knoche shrugs it off and says lawyers are used to being crazy busy. Radicals coach Tim DeByl said Knoche and so many of his players continue to push when many wouldn’t.

“Everybody’s so committed to it, even if they come right from work and are exhausted,” DeByl said. “A lot of people don’t appreciate it until they’ve done it. It’s a real grind to try to have a career and then also play sports professionally.”

Johnson never envisioned playing in a top-flight ultimate league with his lifelong friend despite his own passion for the sport and his constant prodding to get Knoche to embrace it.

“Never, ever, ever,” Johnson said moments after a 29-18 win against Detroit on June 27 at Breese Stevens Field. The game also happened to mark the first time in six years that Knoche and Johnson played offense together.

“It’s funny,” Johnson said. “I’m the guy who has played ultimate his whole life and (playing for a team like the Radicals) is all I ever wanted. He’s like, ‘Whatever, I’m just a sports star,’ and makes the roster before I did.”

Despite limited offensive action over the years, Knoche led the Radicals in goals (6), plus-minus (+10) and was tied for second in assists (3) in the win versus Detroit.

“I always know in the back of my head that ultimate really is Sterling’s thing. He just doesn’t want to admit it,” Johnson said. “I know it is. Nobody commits for as long as he has without it truly being a passion of his. It’s cool to see.”

The Radicals put the finishing touches on their warmups, while Knoche tried to reanimate his muscles from their hourlong snooze in economy class.

The Radicals battled to stay even with the Minnesota Wind Chill through the first quarter, but Minnesota scored four of the first five points of the second quarter and never trailed again in a 25-19 victory.

“It probably feels super frustrating to do all that and then lose the game,” DeByl said, “but I’m happy to have him there. It helps build our team in the long run.”

The disappointed Uber driver may not have carted a Twin to the ballpark that day, but he delivered a professional — in every sense of the word.

“I’m not sure Tim got his money worth out of that flight,” Knoche said. “But I can’t complain about being flown up there. It felt a little bit like the big leagues.”

Tailgating, face-painted fans back in force at NFL stadiums

Tailgating, face-painted fans returned in full force at stadiums around the country as the NFL opened its doors to capacity for the first time since the coronavirus pandemic.

Results from all of Sunday's NFL Week 1 games

NASCAR Cup Series director Jay Fabian has stepped away from his role in response to multiple animal cruelty charges.

“I'm a competitive guy and I'm just trying to keep playing some sport that scratches that itch until I can't anymore,” Sterling Knoche, with disc, said.

Sterling Knoche is a intern at a Madison law firm on Capitol Square. 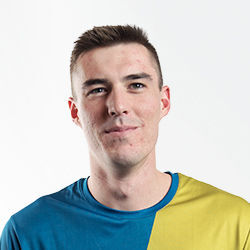