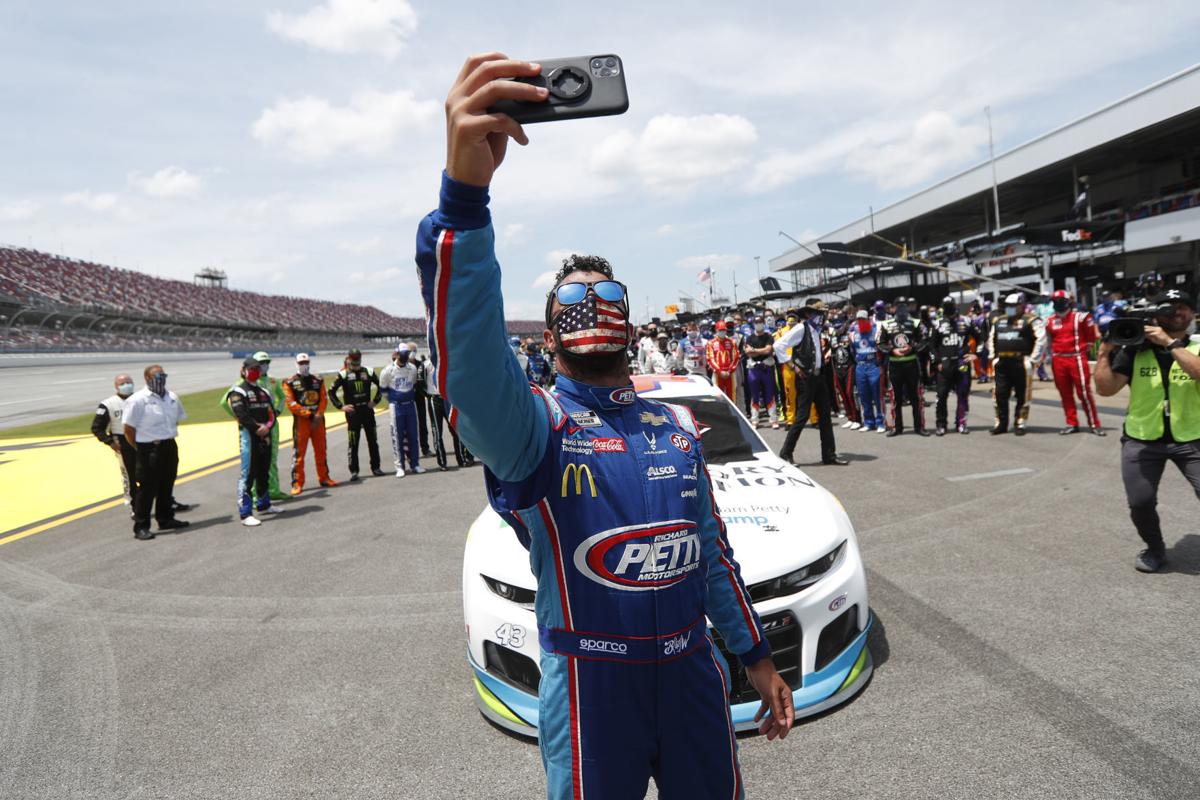 Driver Bubba Wallace takes a selfie with other drivers that pushed his car to the front of the field prior to the start of Monday's race. The act of solidarity with NASCAR’s only Black driver came as FBI agents nearby tried to find out who left a noose in his garage stall over the weekend. 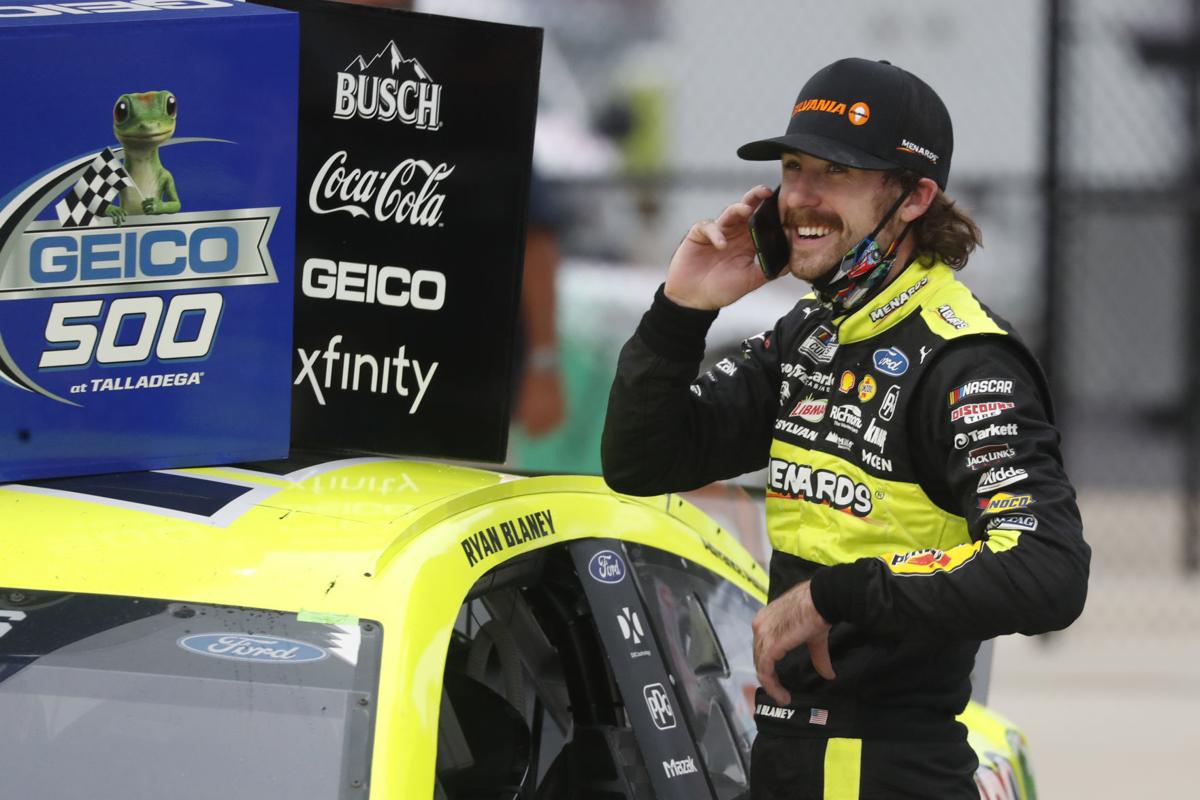 Ryan Blaney celebrates in Victory Lane. It was his first win of the season, second straight at the 2.66-mile track and the fourth of his career. 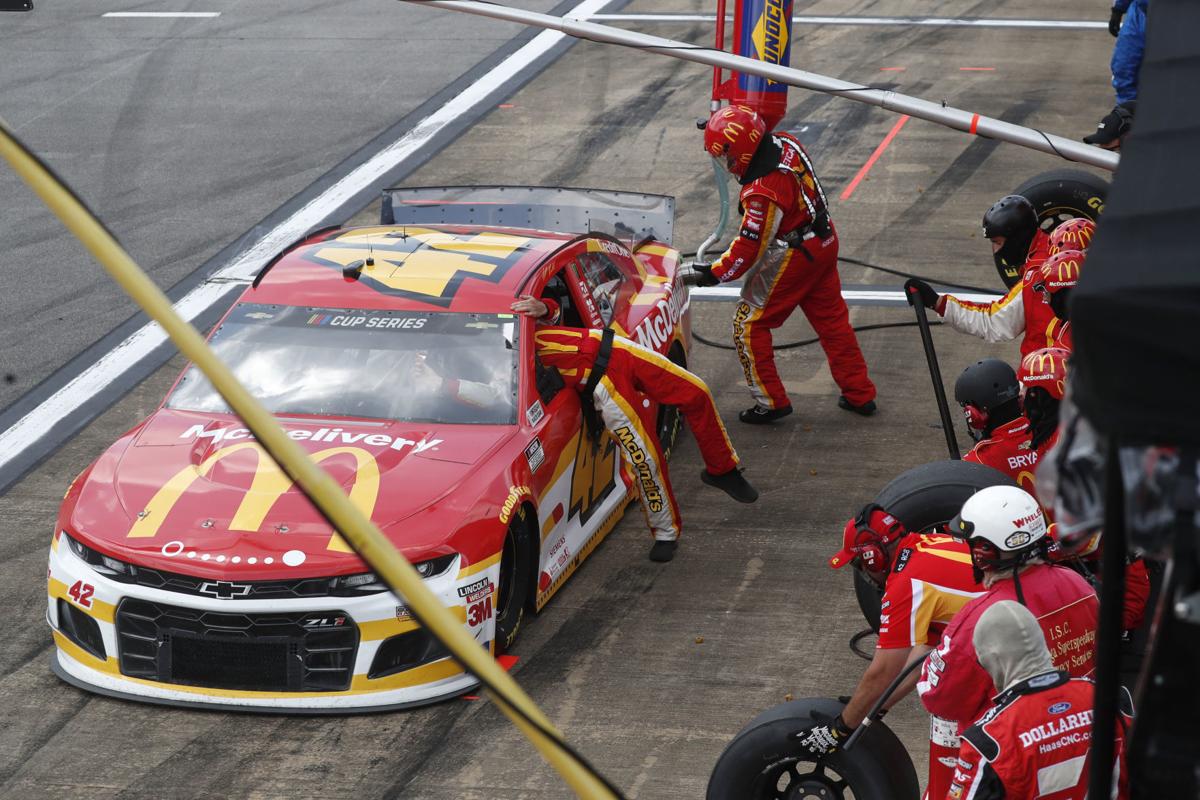 Matt Kenseth gets service in the pits. The Cambridge native finished last in the field.

TALLADEGA, Ala. — Even in victory, Ryan Blaney thought about what happened to close friend Bubba Wallace over the weekend. And what happened afterward.

Blaney held onto the lead after a restart with two laps to go Monday, earning his second straight win at Talladega Superspeedway on a day that began with NASCAR drivers throwing their support behind Wallace.

“I think it’s great that everybody really came together,” Blaney said. “I don’t want it to be remembered as a terrible day or a bad day in NASCAR.

“I want it to be remembered as there was an incident and we all overcame it together and showed that we’re not going to take it any more.”

It was that kind of bittersweet day and weekend.

Blaney nipped Ricky Stenhouse Jr. at the finish line by .007 seconds for his fourth win and first since Talladega in October, albeit this time before a mostly empty venue. It was a race marked by support for Wallace instead of another Big One at Talladega, though there was mayhem behind Blaney on the final lap and he also pushed Erik Jones into the wall near the finish.

“Just trying to block, block the best we could,” Blaney said. “Block the top, block the bottom ... just beating and banging to the line. ”

Aric Almirola spun at the end and crossed the line almost backward.

Ford has now won nine of the past 10 Cup races at Talladega, and all three Team Penske drivers have won this season.

The racing was overshadowed by an extraordinary act of solidarity with NASCAR’s only Black driver. Dozens of drivers pushed Wallace’s car to the front of the field before Monday’s race as FBI agents tried to find out who left a noose in his garage stall over the weekend.

He was emotional after spending time in the top five before running short on fuel and finishing 14th, slapping hands with a group of mostly African-American fans.

“I’m proud to stand where I’m at. ... This sport is changing,” Wallace said. “The deal that happened (Saturday) I wanted to show whoever it was, you are not going to take away my smile. I am going to keep on going.”

Wallace took the lead for a lap at one point, and Stenhouse said he noticed the fan reaction, along with the chants of “Bubba” at the start.

“I looked at the stands and watched all the people jump up and cheer,” he said. “That was pretty cool.”

The stock car series was left reeling and angered by the racist act that came less than two weeks after it banned the Confederate flag on its properties at Wallace’s urging. It has vowed to permanently bar the person responsible, but the investigation was in its early stages.

The 26-year-old Wallace was surrounded by all 39 other drivers in the moments before the race and they were joined by their crews in a march down pit road as they pushed his No. 43 to the front of the line. Wallace climbed out of his car and wept.

It was a stirring move to support Wallace at a track in the heart of the South where Confederate flags have flown for decades and were seen outside the superspeedway all weekend long by fans opposed to NASCAR’s ban.

Standing alongside Wallace for the national anthem was Richard Petty, the 82-year-old Hall of Fame driver known as “The King.” Wallace drives for Petty, who issued a scathing rebuke after the noose was found that called for the “sick person” to be expelled from NASCAR forever — a move NASCAR president Steve Phelps insisted would happen should they be caught.

The race began with Martin Truex Jr. on the pole, and Tyler Reddick won the first stage, which ended in a weather caution that lasted 58-plus minutes.

The crowd had dwindled significantly from Sunday, when up to 5,000 fans were allowed into Talladega — only the second race with fans since NASCAR returned from the pandemic-forced shutdown. Workers painted “#IStandWithBubbaWallace” on the infield grass before the race and Confederate flags were nowhere to be seen inside the sprawling facility that can hold 80,000-plus and usually sees dozens of RVs lined up across the infield.

In the stands, fan Luke Johnson said he is against the flag ban, saying: “All the NASCAR tracks need to keep on flying them.”

As for the noose left for Wallace, he said: “I thought it was funny myself.”

Another fan, Robert Chaisson, said he didn’t have a strong opinion on the ban. He certainly did on what happened to Wallace.

“That was messed up. I hope they charge that guy with a hate crime,” Chaisson, who lives in Alabaster, Alabama, said. “It doesn’t matter what your opinion is, it’s when you cross that line, then your opinion no longer matters. That’s trying to inflict harm on someone else.”

NASCAR has launched an investigation after a noose was found in the garage stall of Bubba Wallace, the only Black driver in the elite Cup Series who just two weeks ago successfully pushed the stock car series to ban the Confederate flag at its venues.

Denny Hamlin went to the lead for the final time with 30 laps left and held off Chase Elliott for his record-tying third NASCAR Cup Series victory at Homestead.

NASCAR said it was the lone garage stall with a pull down rope that resembled a noose, and U.S. Attorney Jay Town and FBI Special Agent in Charge Johnnie Sharp Jr. said the investigation determined "nobody could have known Mr. Wallace would be assigned" to that same stall.

Denny Hamlin is starting his own race car team in partnership with Charlotte Hornets owner Michael Jordan and Bubba Wallace as the driver.

Driver Bubba Wallace takes a selfie with other drivers that pushed his car to the front of the field prior to the start of Monday's race. The act of solidarity with NASCAR’s only Black driver came as FBI agents nearby tried to find out who left a noose in his garage stall over the weekend.

Ryan Blaney celebrates in Victory Lane. It was his first win of the season, second straight at the 2.66-mile track and the fourth of his career.

Matt Kenseth gets service in the pits. The Cambridge native finished last in the field.