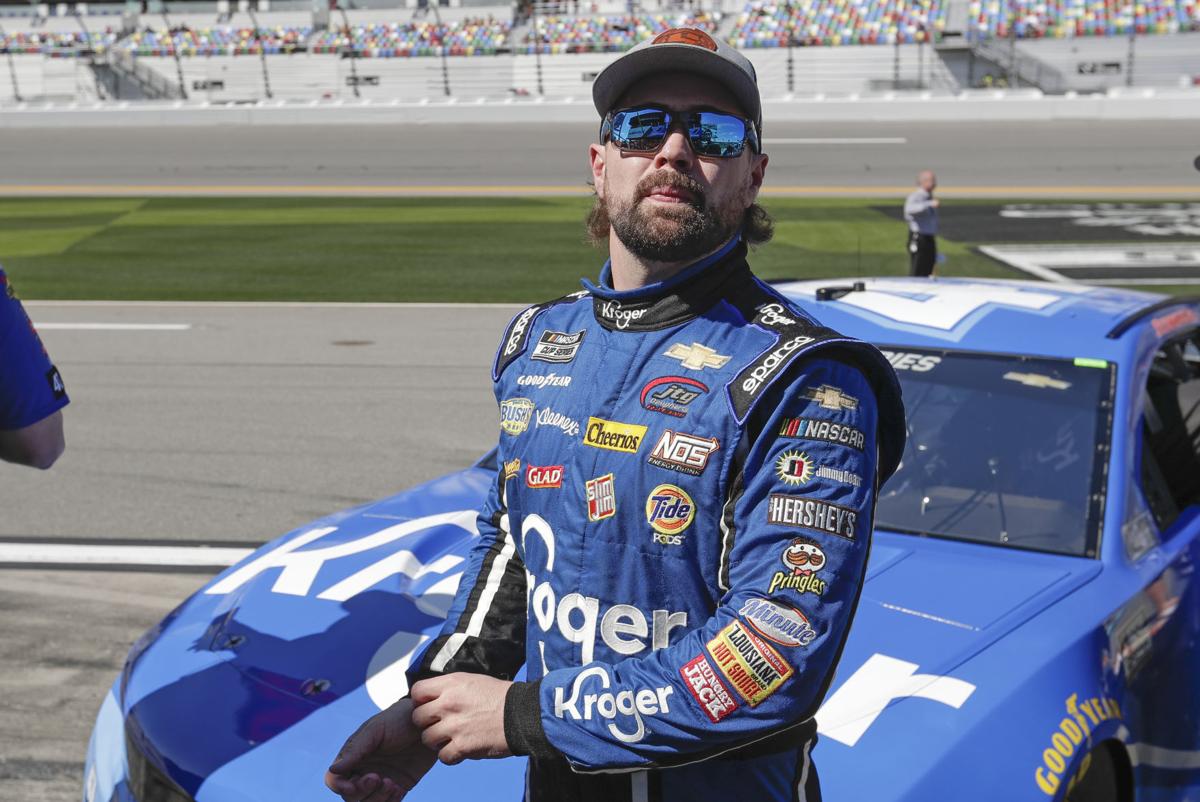 Ricky Stenhouse Jr. looks up at the leaderboard after his qualifying run Sunday. He finished 13th in last year's Daytona 500. 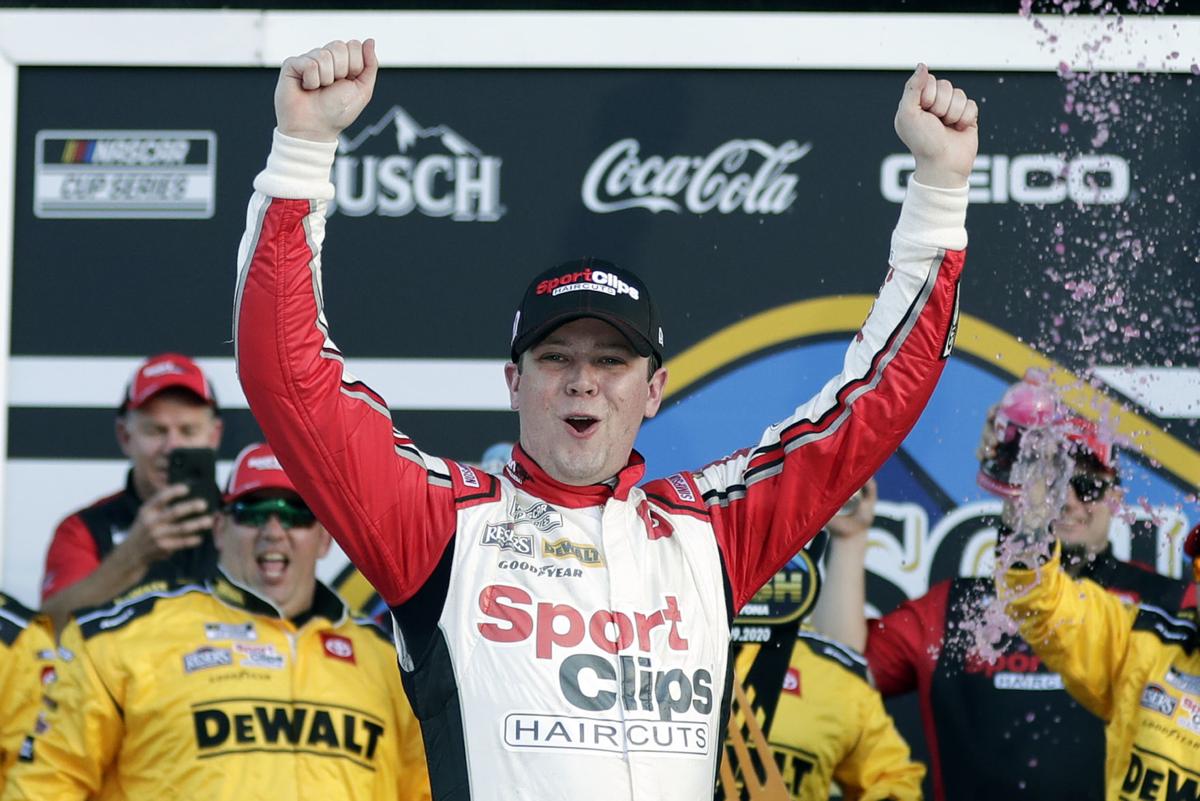 Erik Jones celebrates his win in the Busch Clash. He led just one lap — the last one.

Stenhouse won the pole Sunday for the season-opening Daytona 500 next weekend, putting JTG-Daugherty Racing in the NASCAR spotlight for a week. Stenhouse’s third pole in 257 Cup Series starts and first at Daytona International Speedway came on his second day in the new Chevrolet Camaro.

His first day behind the wheel came during practice Saturday.

Stenhouse turned a fast lap at 194.582 mph to claim the pole, edging Alex Bowman for the top spot. Bowman reached 194.363 mph around the 2½-mile superspeedway to lock down a front-row spot for the third consecutive year. Bowman finished 17th and 11th, respectively, in the past two openers.

“As a race car driver, there’s not much you can do to make them go faster,” Bowman said. “But you can sure screw them up, so at least I didn’t do that.”

Only the top two spots were determined in single-car qualifying. The starting order for the rest of the 40-car field will be set by a pair of qualifying races Thursday at Daytona.

Even so, the Hendrick Motorsports entries clearly have speed: Stenhouse’s engines are built by Hendrick, and Hendrick drivers Bowman, Chase Elliott and Jimmie Johnson were second through fourth on the speed chart.

Winning the pole means little, if anything, at NASCAR’s premier race. No pole winner has gone on to win “the Great American Race” since Hall of Famer Dale Jarrett in 2000.

But for Stenhouse, the accomplishment meant everything.

He was surprisingly dumped by Roush Fenway Racing in October, long after the two-time Xfinity Series champion thought he was good for another year with the only NASCAR team for which he’s driven. The team had a chance to bring back former developmental driver Chris Buescher and gave him Stenhouse’s seat in the No. 17 Ford.

“I think there’s a handful of us that feel like we have something to prove,” Stenhouse said. “I feel like I can still get the job done behind the wheel and win races like we did in the Xfinity Series. ... That was a huge move for me going over there, bringing people that I’m familiar with that have always been in my corner. I think I’d have been lost not having them there.”

There was an opportunity in Sunday qualifying for two teams that don’t hold charters to lock up spots in the starting grid. Justin Haley and Brendan Gaughan, the youngest and oldest drivers on the Daytona 500 entry list, landed those.

The first race of the NASCAR season was a demolition derby that turned DIS into a giant junkyard.

Erik Jones won the race that left a multi-million dollar trail of destruction and masked the fact the Clash was a made-for-TV exhibition race. Only 18 cars were entered and only six were on track when the checkered flag flew at the end of a third overtime.

Jones crossed the finish line in a Toyota with a crumpled hood after a huge push from Joe Gibbs Racing teammate Hamlin.

“I’ve got to give a huge thanks to Denny there ... he stuck with us there that whole last lap,” Jones said. “It wasn’t the fastest car I don’t think left in the race, but we brought it home. I owe him one for that one, for sure.”

Hamlin was a lap down after a blown tire on the previous overtime attempt caused him to crash half the cars remaining on track, but he had enough speed to push Jones along the outside and give Gibbs yet another win.

Brad Keselowski was among those incensed by the aggressive late blocking. The race was fairly anti-climactic until two wrecks in the final nine laps sent it into overtime, and as Keselowski railed against the racing that ended his day, Hamlin got a flat tire as the leader on a restart and collected most of the cars on track.

“Dumb, dumb racing,” said Keselowski, who slapped the side of an ambulance with both hands in frustration. “We shouldn’t be wrecking all these cars. You’d think these guys would be smarter than that. It’s the same thing over and over, somebody throws a stupid block that’s never going to work and wrecks half the field.

“I don’t know. Maybe we need to take the helmets out of these cars and the seat belts out. Somebody will get hurt, and then we’ll stop driving like (expletive).”

Kyle Busch, collected in the accident that ended Keselowski’s day when teammate Joey Logano tried to block Busch, said the crashes are a product of superspeedway racing.

“Either you can race or you can wreck,” Busch said. “The reason why we ride in single file (early in the race) is because we don’t know how to race. Just a product of a few bad decisions there and we’re all crashed.”

The cars raced in Sunday’s exhibition event are backups for the Feb. 16 season-opening Daytona 500.

The 75-lap event ended up going 88 laps because of the late crashes, making it the longest in history.

For those who know Jimmie Johnson best, his drive to finish his final full season in NASCAR in championship style can’t be beat.

The Daytona 500 has been postponed by rain for the first time since 2012, dampening NASCAR’s season opener that started with a ballyhooed visit from President Donald Trump.

At the finish line, Denny Hamlin made history with a second straight Daytona 500 victory in an overtime photo finish over Ryan Blaney, a celebration that quickly became muted as drivers awaited an update on Ryan Newman’s condition.

Despite a botched final pit stop, Joey Logano still wound up in Victory Lane for the second year in a row in Las Vegas, winning a two-lap sprint to the finish that ended under caution.

Ricky Stenhouse Jr. looks up at the leaderboard after his qualifying run Sunday. He finished 13th in last year's Daytona 500.

Erik Jones celebrates his win in the Busch Clash. He led just one lap — the last one. 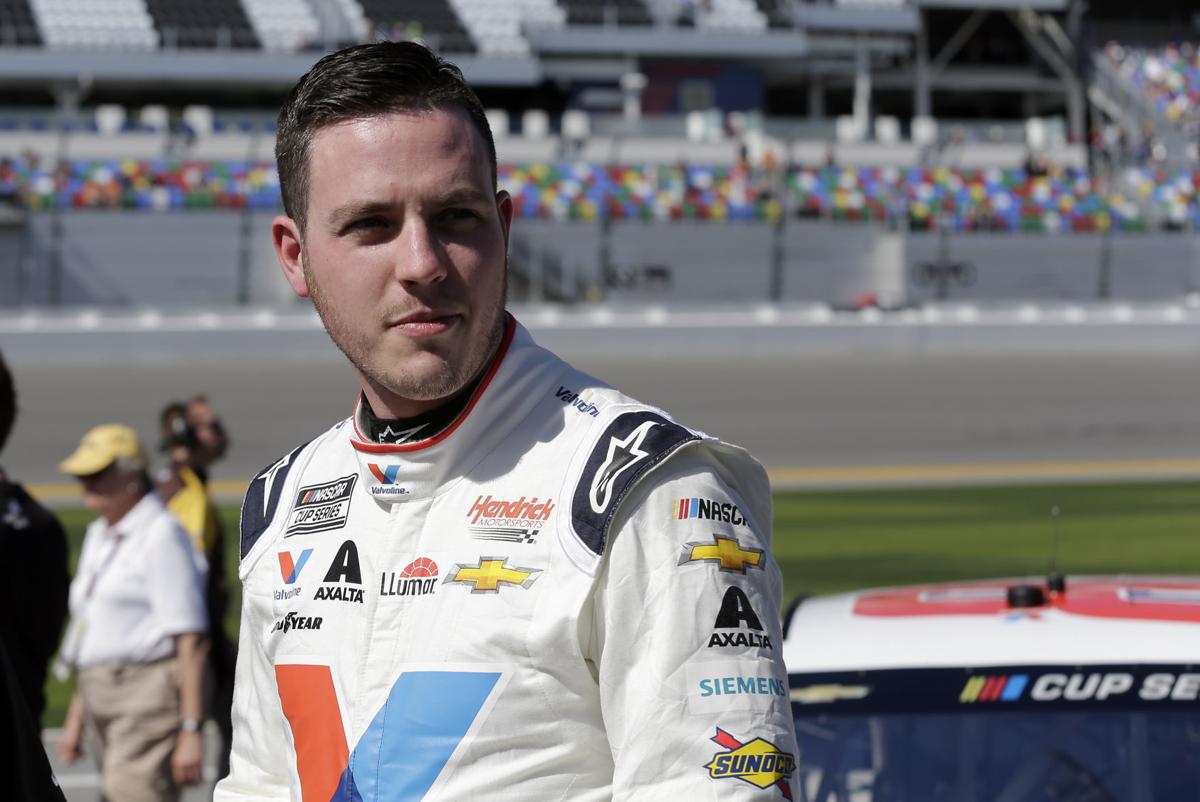