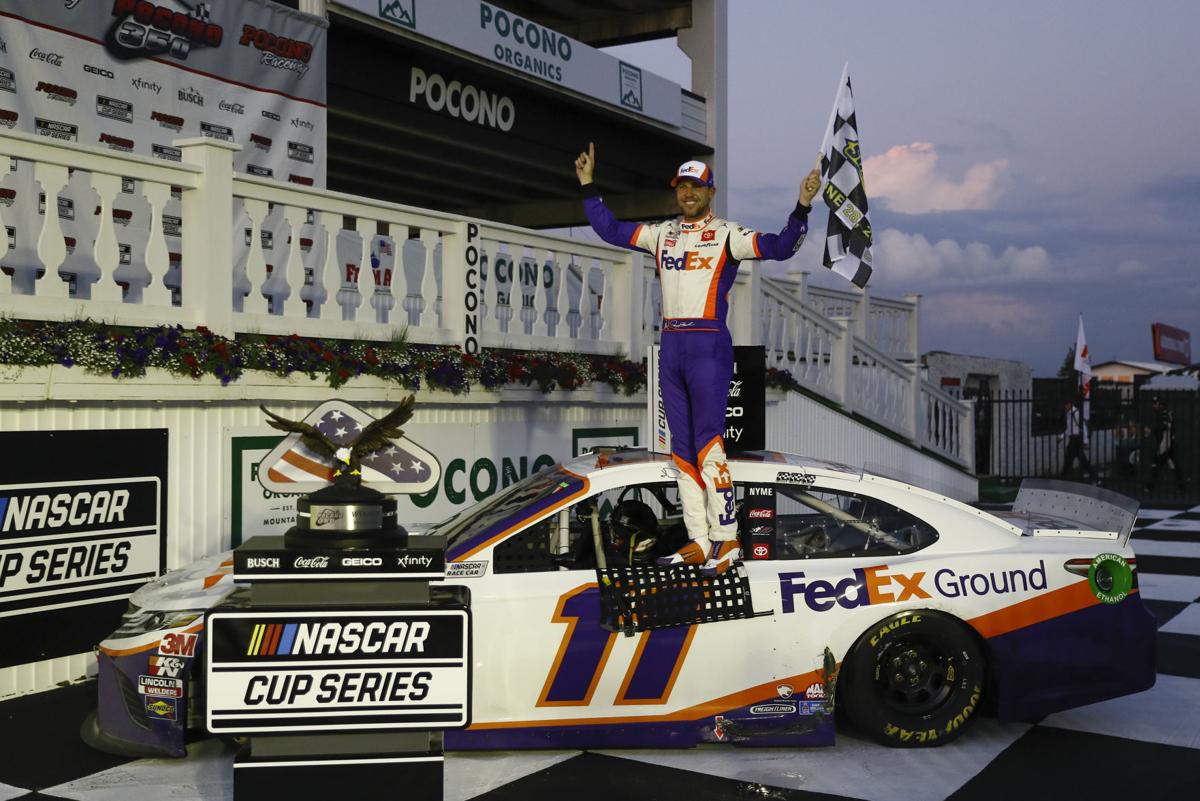 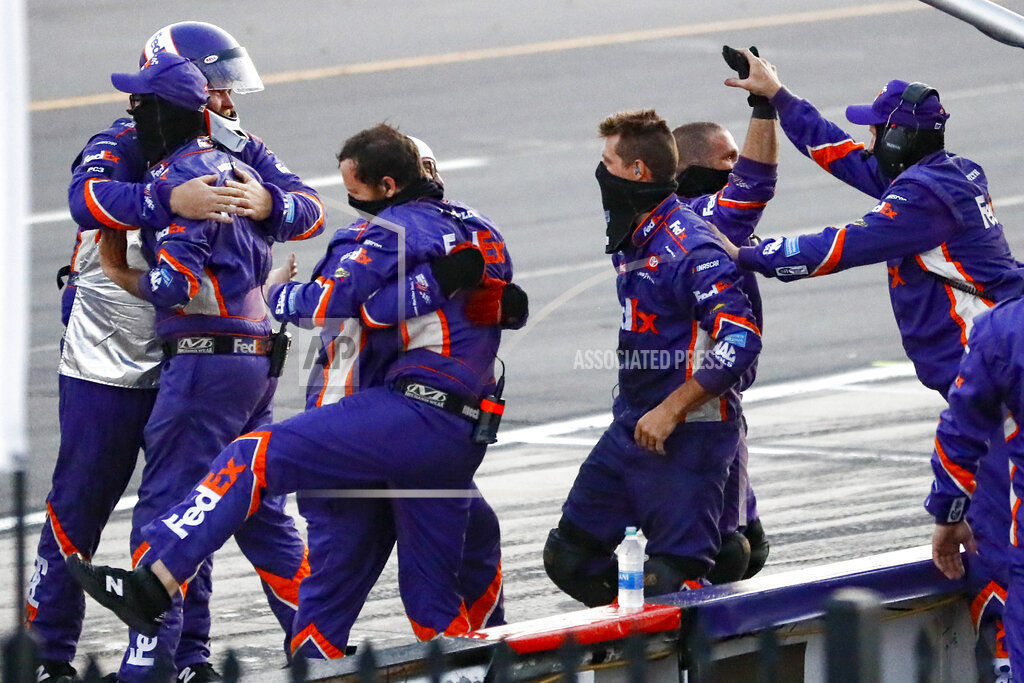 Crew members for Denny Hamlin celebrate the team's fourth victory of the season. 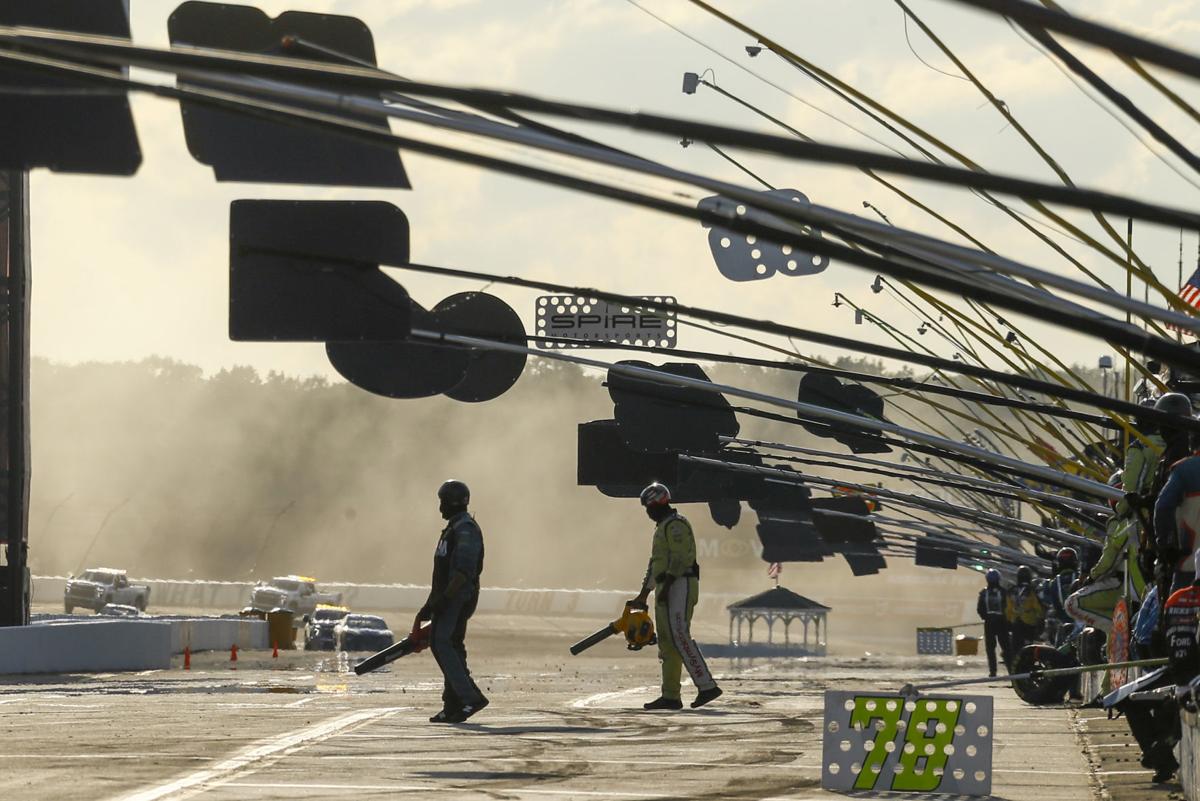 Crew members blow away debris along pit road prior to several cars coming in during a caution period.

LONG POND, Pa. — Round 2 at Pocono went to Denny Hamlin. Hamlin seized the spotlight, specifically in Victory Lane when Pocono had to set up lights after the race ended in the dark.

Hamlin topped Kevin Harvick on Sunday night to win the second Cup race of the weekend at Pocono Raceway and flip the result of the opener. The 1-2 finish out of each driver is a clear sign two of the best drivers in the game are poised again to make a championship push.

Hamlin says bring it on.

“We just want to get to the final four with a chance,” Hamlin said.

Hamlin has four wins this season for Joe Gibbs Racing and Harvick has three for Stewart-Haas Racing as they start to separate themselves from the rest of the field.

Hamlin is racking up milestones as he chases his first NASCAR Cup championship. Hamlin has 41 victories to move to 19th on NASCAR’s career list and his sixth win at Pocono matched Jeff Gordon for most at the 2½-mile tri-oval.

“It’s hard to believe because we went through such a dry spell there in the middle of my career,” Hamlin said about his Pocono results.

Hamlin raced to his fourth victory of the season to cap a wild, marathon day of racing at the track, with three NASCAR races and nightfall in the finale. Pocono doesn’t have lights — but the pit road numbers were lit up and glowed as Hamlin won for the second straight year at Pocono.

Hamlin had a late vibration in his No. 11 Toyota on Saturday that hindered his attempt to catch Harvick down the stretch. About 25 hours later, Hamlin surged past Harvick and built a nearly 3-second lead once the SHR driver got caught up in lapped traffic.

“Our car was actually better today than it was yesterday,” Harvick said. “We had to run in a lot of traffic there and Denny kept ticking off laps.”

The Daytona 500 champion’s victory capped the first NASCAR tripleheader at one track. The race was delayed by lightning and rain, as much a part of Pocono as a JGR driver taking the checkered flag. Gibbs’ roster has six of the past seven winners at Pocono.

“I hate to feel disappointed in a second and a first, but man, I felt like I should have won both races,” Hamlin said.

Harvick won Saturday’s race and put the brakes on a burnout — he had to save that engine for another run in the same No. 4 Ford. The starting lineup was inverted for Sunday’s race so Harvick started 20th.

The rain wreaked havoc with the third NASCAR race of the day at Pocono. Brandon Jones opened the day with a win in the Truck Series race and Chase Briscoe won the Xfinity race. Pocono became the first track in NASCAR history to hold three national series races on the same day.

Harvick was a fan of the Cup doubleheader format.

“I think everybody would be super happy with a much shorter season and multiple doubleheaders,” Harvick said.

NASCAR’s hope to capitalize on being about the only major sport to run live every week with sports on pause in the wake of the coronavirus pandemic has been besieged by weather issues. Sunday marked the ninth race out of 15 this season with a weather delay and three have been moved a full day. It’s hard to keep TV viewers interested when its a parade of Air Titans instead of a mad dash to the checkered flag.

Pocono is notorious for rainy weekends and in 2016 had two Cup races and an IndyCar race all washed out and run on Monday. The “Need Help or Info?” signs around the track went unneeded as the only thing in the grandstands was rain.

It put yet another damper on seven-time Jimmie Johnson’s farewell season. Johnson, a three-time winner at Pocono, was honored by the track over the weekend. Pocono painted “Jimmie” on one side of the start/finish line, added a painted “48 Jimmie Johnson” rock to their infield collection of race legends, and his two young daughters gave the command for the driver’s to start their engines. He finished 16th.

But he also gave some inspiration to Hamlin.

“Maybe one day I’ll get one of those black rocks they’ve got here for all those good guys that have won it,” Hamlin said.

He might get the rock, esepcially if he can pass Hall of Famer Gordon. The 39-year-old Hamlin feels he has plenty of time and talent left in the tank to set that mark.

“I don’t think this is the last one,” Hamlin said.

NASCAR said it was the lone garage stall with a pull down rope that resembled a noose, and U.S. Attorney Jay Town and FBI Special Agent in Charge Johnnie Sharp Jr. said the investigation determined "nobody could have known Mr. Wallace would be assigned" to that same stall.

Ryan Blaney held onto the lead after a restart with two laps to go Monday, earning his second straight win at Talladega Superspeedway on a day that began with NASCAR drivers throwing their support behind Bubba Wallace.

NASCAR has launched an investigation after a noose was found in the garage stall of Bubba Wallace, the only Black driver in the elite Cup Series who just two weeks ago successfully pushed the stock car series to ban the Confederate flag at its venues.

Denny Hamlin went to the lead for the final time with 30 laps left and held off Chase Elliott for his record-tying third NASCAR Cup Series victory at Homestead.

Crew members for Denny Hamlin celebrate the team's fourth victory of the season.

Crew members blow away debris along pit road prior to several cars coming in during a caution period.