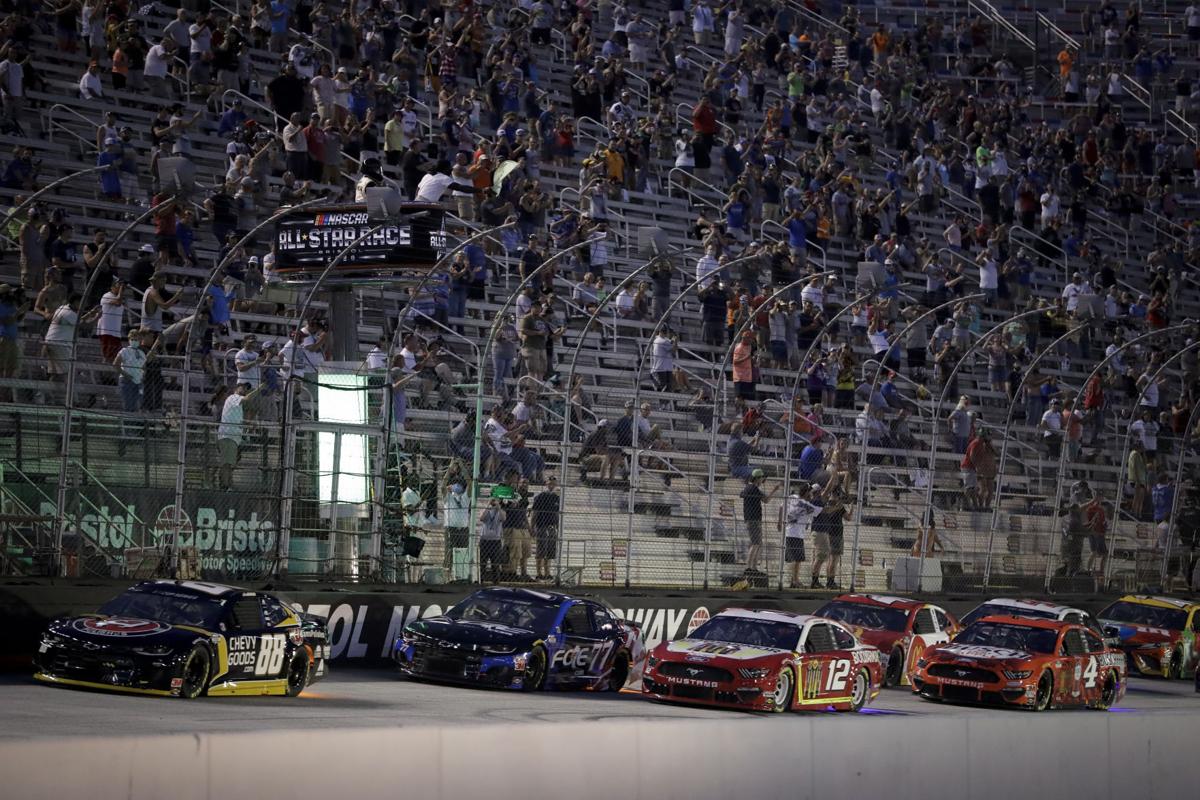 Tennessee officials allowed NASCAR to sell up to 30,000 tickets for Wednesday's races. Attendance was estimated to be 20,000. 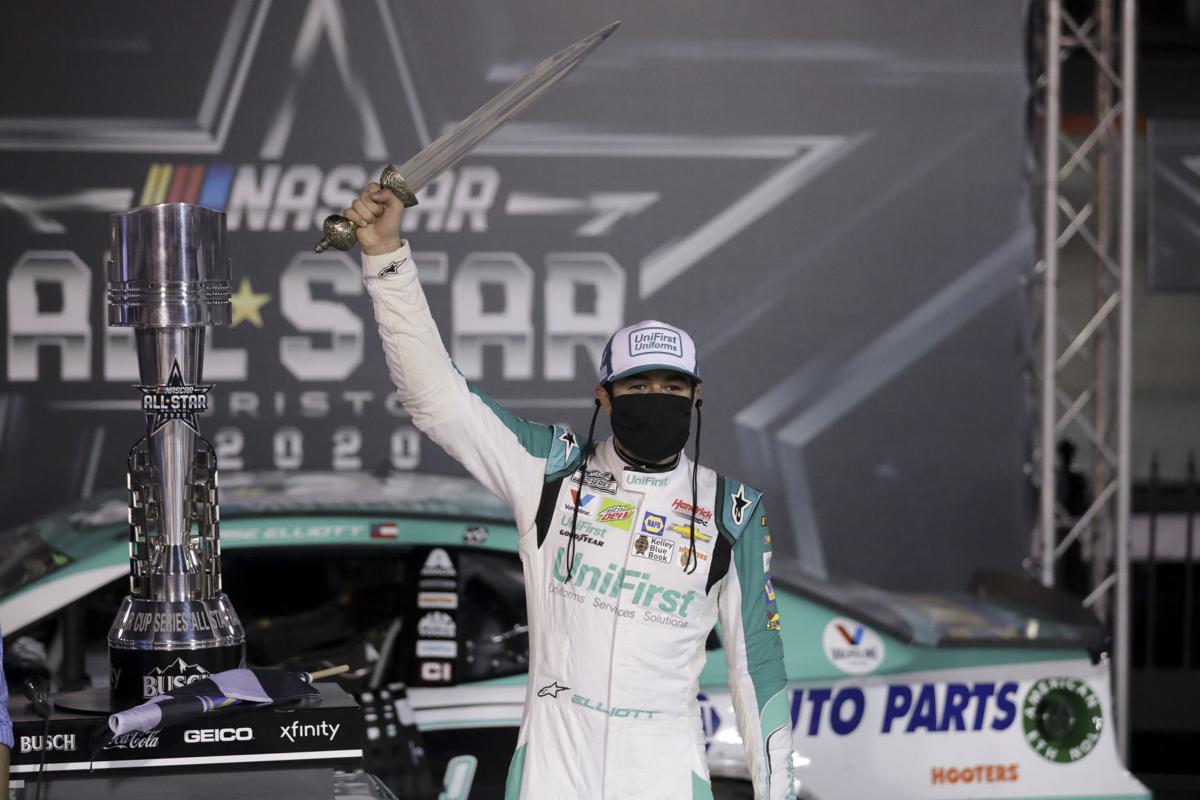 Chase Elliott celebrates with the trophy in Bristol, Tenn. 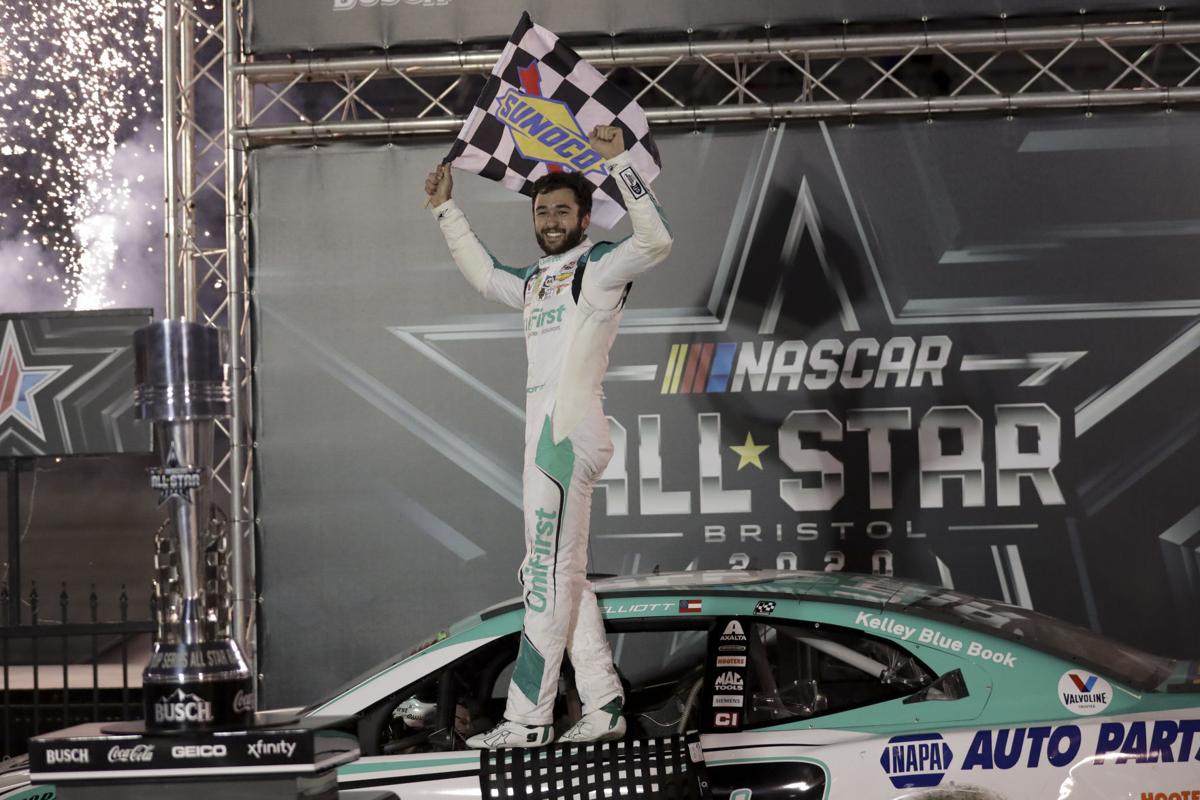 BRISTOL, Tenn. — Cue the siren at the Dawsonville Pool Room — another Elliott is an All-Star winner.

“Oh my gosh, I can’t believe it,” Elliott said.

Back in their Georgia hometown, the pool room marks every win by the father or son by blaring its horn no matter the time of day or night.

Elliott won the second and third stages of the event and earned the right to choose which lane he wanted to restart for the final 15-lap sprint to the finish. He picked the outside lane and pulled buddy Ryan Blaney with him on the restart but was never challenged and beat Kyle Busch to the finish line.

Bill Elliott won the race in 1986, the only year it was held at Atlanta Motor Speedway. The race began in 1985 at Charlotte Motor Speedway and was held at that North Carolina track every year but one until it was moved during this pandemic-altered year.

Tennessee officials allowed NASCAR and Speedway Motorsports to sell 30,000 tickets to the All-Star race, so it was moved from Charlotte because North Carolina would not authorize spectators for the race.

“What a better night to have fans back,” Elliott said. “There’s nothing like Bristol. There’s no feeling like it. This speaks for itself, Bristol is an electric atmosphere. We’ll take that million dollars back to Georgia.”

The crowd surged to the fence and chanted “USA! USA!” as Elliott celebrated on the frontstretch. It was the most spectators at a sporting event in the United States since March. Because the speedway is privately owned, attendance numbers will not be released, but there appeared to be about 20,000 people in the grandstands. Tickets were on sale through Tuesday evening and still available on Bristol’s website until the deadline.

Bristol, dubbed “The Last Great Colosseum,” can hold about 140,000 spectators. Speedway Motorsports had those in attendance socially distanced through the grandstands and masks were only required upon entrance. Fans were told they could remove them once in their seats.

Following the post-race fireworks, an announcement was made to the crowd telling fans they’d be dismissed by row.

Elliott won in his fifth All-Star appearance and is the 25th driver to win the made-for-TV race. He and his father join Hall of Famers Dale Earnhardt and Dale Earnhardt Jr. as winning father-son duos of the event.

Bubba Wallace was wrecked out of the qualifying race, ruining his shot of racing for the $1 million prize.

One driver advanced into the All-Star race through a fan vote and Wallace had been leading when results were last updated by NASCAR a week ago. After he crashed 17 laps into the qualifying race — which awarded three additional slots to stage winners into the 20-driver All-Star field — he was no longer eligible to win the fan vote.

It didn’t matter, anyway. Clint Bowyer was named winner of the fan vote and NASCAR said he received the most votes even with Wallace eliminated. Aric Almirola advanced by winning the first stage, William Byron for winning the second stage and Matt DiBenedetto for winning the third stage.

Wallace had race-ending contact with the wall when his No. 43 Chevrolet appeared to be turned from behind by Michael McDowell 17 laps into the first stage. He said he didn’t need to see a replay because he knew McDowell’s contact was egregious.

“Just disrespect. When you get hooked into the wall, I don’t even need to see a replay,” Wallace said. “People say he’s one of the nicest guys in the garage. I can’t wait for the God-fearing text that he is going to send me about preaching and praise and respect. What a joke he is.”

A piece of Wallace’s crumpled sheet metal was placed on the back of McDowell’s team truck and Wallace was seen walking away.

Wallace climbed from his car and gave a thumbs-up to a contingent of fans cheering for him. Roughly two dozen organizers from Justice 4 the Next Generation traveled from Georgia, South Carolina, North Carolina and Virginia in an effort to diversify NASCAR.

Wallace is the only Black driver competing regularly in NASCAR’s top series, and drivers rallied around him after a noose was found at his assigned stall at Talladega Superspeedway in Alabama. Federal authorities ruled last month the noose had been hanging since October and was not a hate crime.

Cole Custer became the first rookie regular to win in the NASCAR Cup Series in four years, surging to the lead in a four-wide, final-lap scramble Sunday at Kentucky Speedway.

Kevin Harvick and Denny Hamlin are expected to race head-to-head for the NASCAR Cup title when the 10-week playoff series begins Sunday at Darlington Raceway.

Tennessee officials allowed NASCAR to sell up to 30,000 tickets for Wednesday's races. Attendance was estimated to be 20,000.

Chase Elliott celebrates with the trophy in Bristol, Tenn.