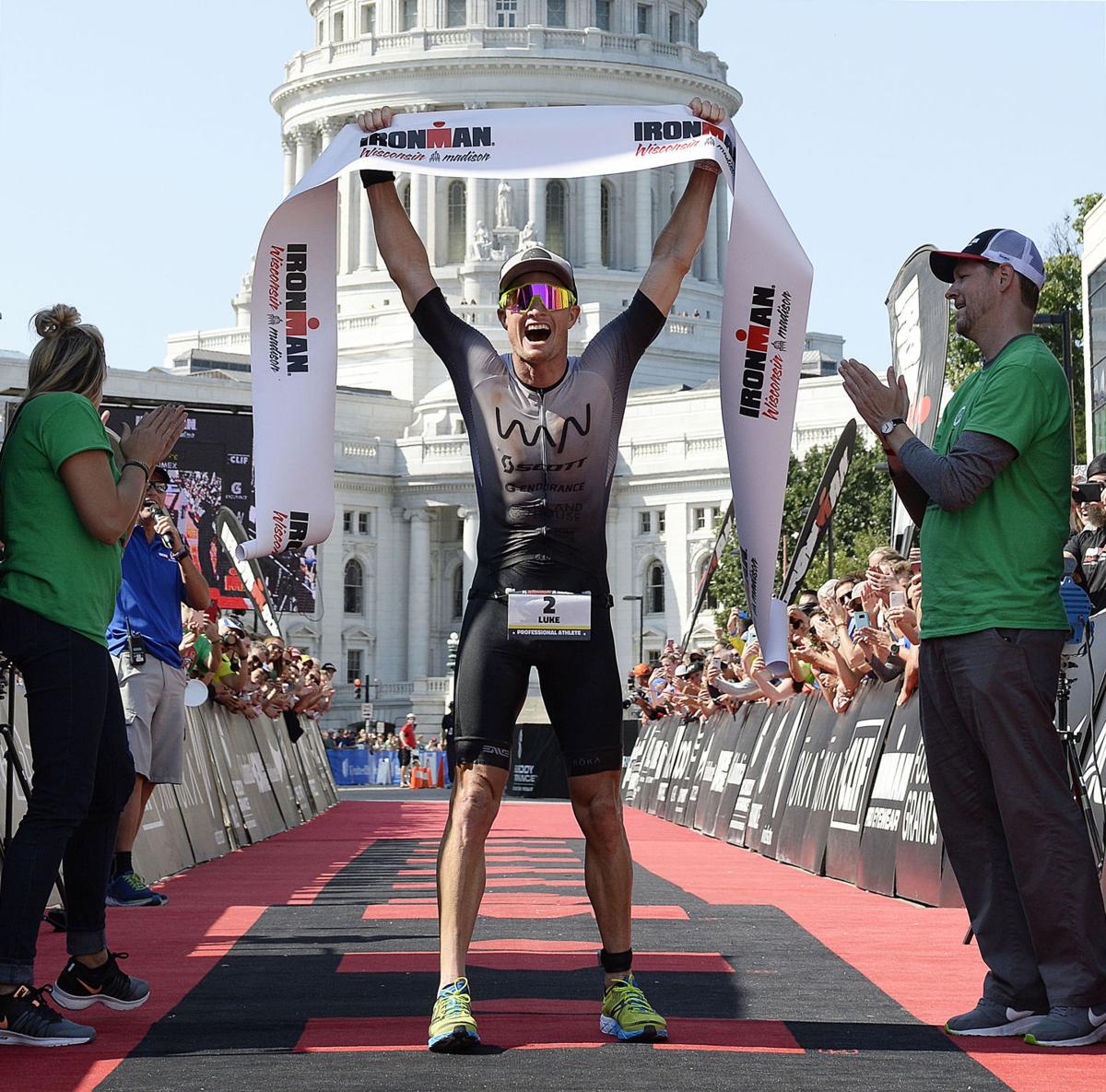 Luke McKenzie celebrates Sunday on Capitol Square after winning his ninth Ironman title with a time of 8 hours, 17 minutes, and 19 seconds. 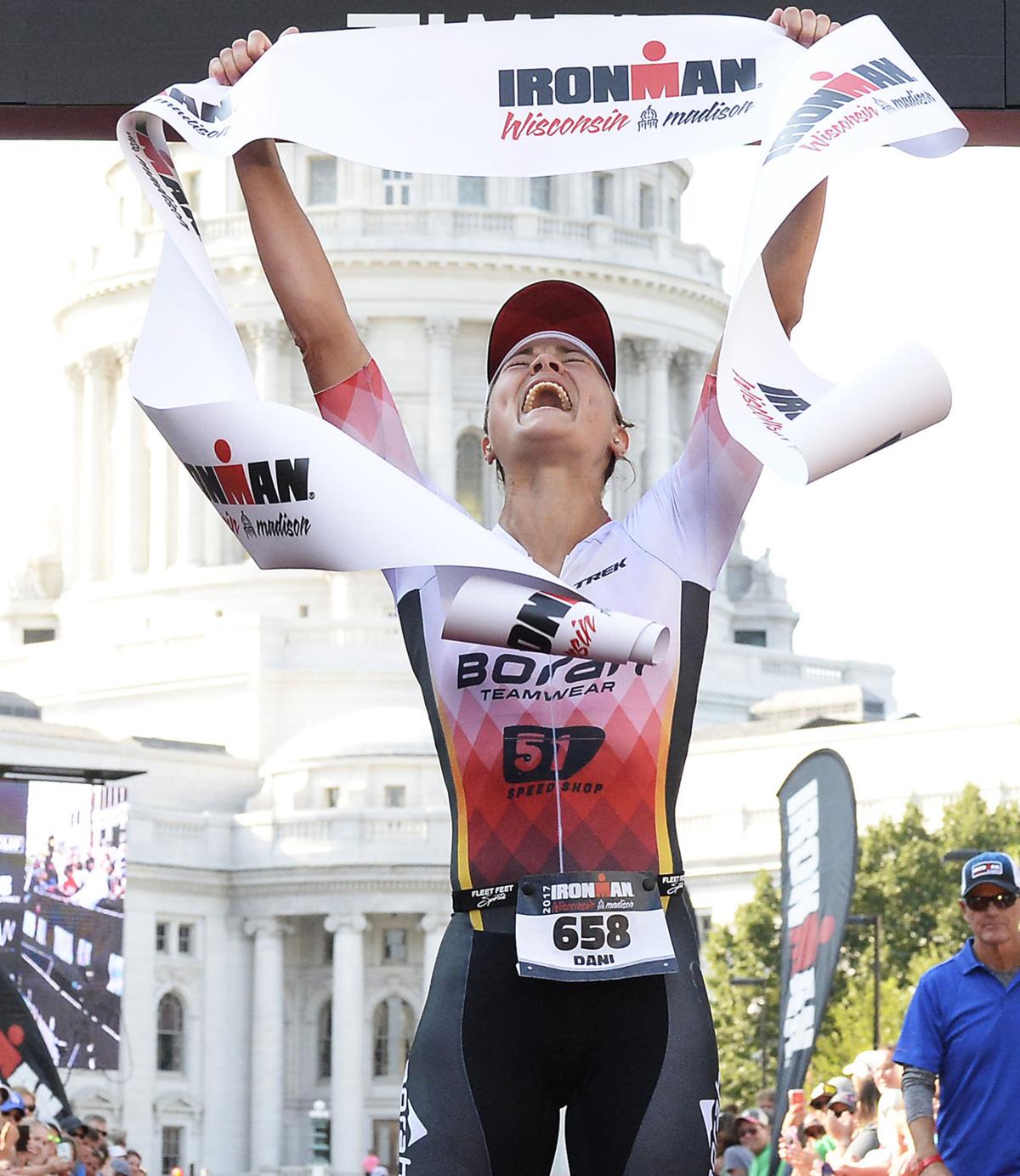 UW alumna Dani Fischer was the women's champion with a time of 9 hours, 57 minutes, and 41 seconds. 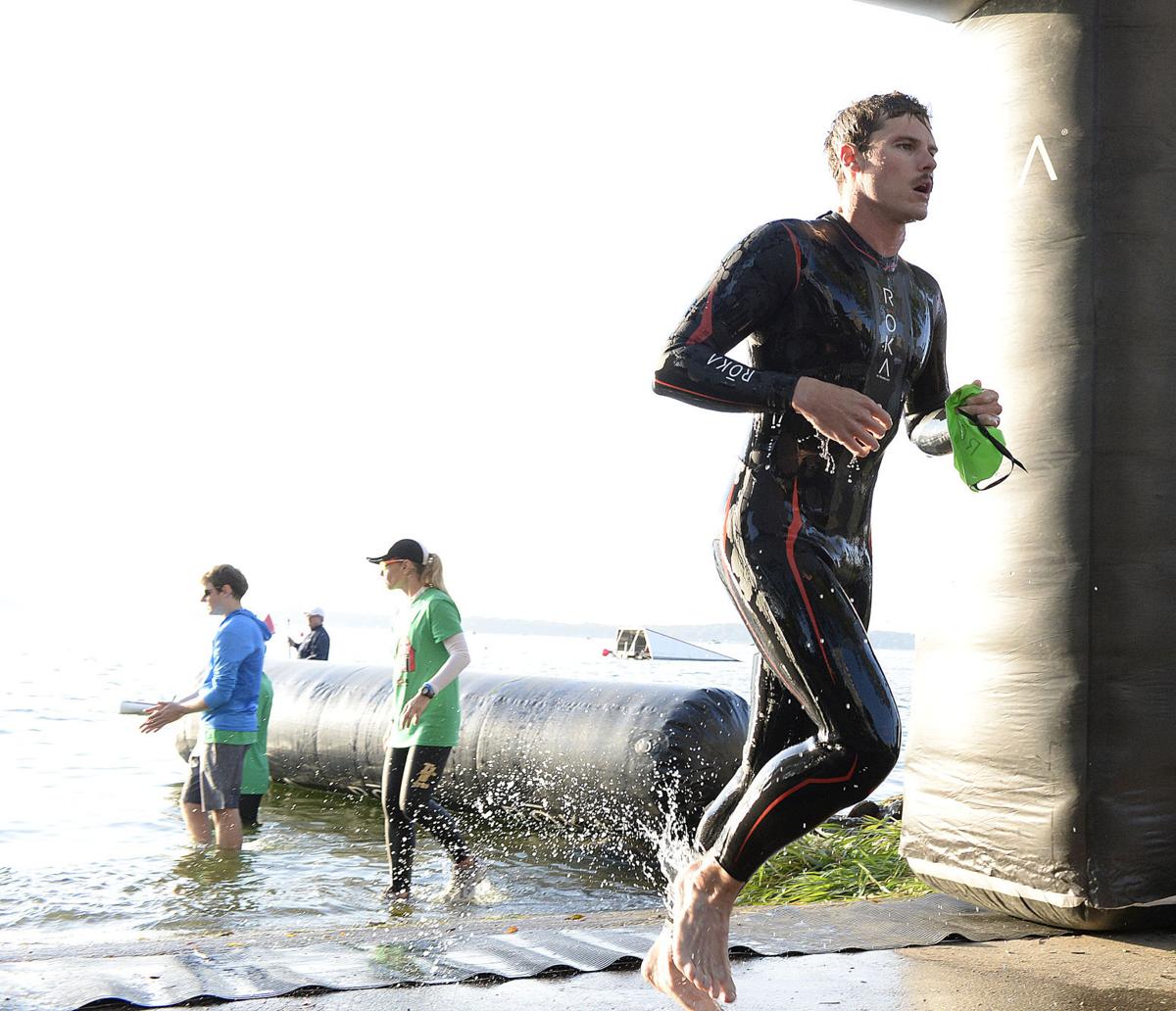 Athletes cross the swimming finish line and prepare to transition to the 112-mile bicycle ride.

Spectators line the streets in Verona to cheer on the competitors.

TAMIRA MADSEN For the State Journal

Luke McKenzie won Ironman Wisconsin, but the Australian professional athlete wouldn’t have been in Madison if it weren’t for a major assist from his wife.

McKenzie, a 17-year Ironman veteran with eight Ironman titles, was hampered by back problems, and in recent years, thought about quitting the sport.

But his wife, Beth McKenzie, who posted a runner-up finish at Ironman Wisconsin in 2011 and a fourth-place effort in 2013, told her husband the 140.6-mile event was the 36-year-old’s type of race.

And she was right.

Luke McKenzie won his first race in North America on Sunday in 8 hours, 17 minutes, 19 seconds. He crossed the finish line on Capitol Square more than 10 minutes ahead of TJ Tollakson of Des Moines, Iowa, who posted a time of 8:28:17.

McKenzie excels on hilly bike courses, and he made the most of his time on the 112-mile course. Other competitors shared input that the course was difficult, but the Aussie said his strategy played out. He posted his best split time during an Ironman bike race at 4:31:47.

“I just had to ride relatively conservative because if you ride too deep on the bike, there’s a marathon you’ve still got to run on very tired legs,” McKenzie said. “So, I made sure I rode within myself and backed myself to have a really good run.”

Beth McKenzie said the event is a favorite among athletes, on the pro and amateur levels.

“Madison has the best crowd support of any Ironman outside of Kona,” said McKenzie, referring to the Hawaii destination where the Ironman World Championships are held. “Just running up and down State Street is amazing and so much fun.”

The top Madison-area finisher on the men’s was Blake Becker, who finished 12th overall in 9:20:28. Becker, a 2000 Madison West graduate who was born and raised in the city, had clinched fifth-place performances in two other Ironman Wisconsin races.

Becker has been a pro since 2006 and participated in 37 Ironman competitions. He works as a trainer and coach for his own business, Blake Becker Multi-Sport Coaching, and 32 of his clients participated in Sunday’s event.

Becker said he wasn’t pleased with his effort, since he had lingering symptoms from a sinus infection. But the reception he gets from his hometown crowd is a satisfying experience.

“I knew about one in every five people out there,” Becker said of the spectators lining many areas of the course. “No matter how the day goes, you’ve got to keep pushing hard and pushing forward.”

Former University of Wisconsin athlete Dani Fischer was the top female finisher. She logged a mark of 9:57:41, with a large group of friends and family cheering her along the course.

Fischer, who played on the UW women’s soccer team for two seasons (2007-08), walked on with the Badgers women’s cross country team in 2011.

She said she was thrilled with her race, especially considering she shaved 26 minutes off her 2016 time. Fischer, who works as a pharmacist in Indianapolis, competed as a pro in two Ironman Wisconsin events but decided not to renew her pro license.

“The whole day was surreal,” she said. “There were definitely ups and downs, but having done the event last year, I knew what the downs felt like so I was able to come out of them.

“When you’re a pro it’s all about the business and it’s almost like a second job. I do this for the people and the experience. There’s nothing like this.”

Meanwhile, a new component at this year’s Ironman Wisconsin was that the swim portion was done in six waves, with each wave consisting of 500 swimmers, based on age group.

Keats McGonigal, who works as Ironman regional director, thought the change was a big success.

“We did that in order to spread out the swim,” McGonigal said. “When we’ve done it at other races there’s been less anxiety among the swimmers because they don’t feel like they’re in the middle of a big pack.”

The World Ironman Corp. signed an extension with the Madison Area Sports Commission in 2013 to hold Ironman Wisconsin in the area until 2018.

McGonigal said the sides are negotiating to bring the event back.

“We are in discussions to extend that for a lot more years,” he said. “It’s been a great race for us. They’re excited about having us back and we would love to come back. The goal would be to announce it before next year’s race.”

A total of 20 male pro athletes shared a $40,000 purse at Sunday’s Ironman Wisconsin, which had 2,503 competitors. The Ironman organization began splitting the women’s and men’s pro fields in June 2015. The women return to Madison in 2018.

Luke McKenzie, of Australia, won the Ironman Wisconsin triathlon on Sunday in Madison.

Four more years! Ironman Wisconsin to stay in Madison through 2021

Ironman Wisconsin, a Madison tradition for the past 16 years, will be back in the capital city for at least four more.

Luke McKenzie celebrates Sunday on Capitol Square after winning his ninth Ironman title with a time of 8 hours, 17 minutes, and 19 seconds.

UW alumna Dani Fischer was the women's champion with a time of 9 hours, 57 minutes, and 41 seconds.

Athletes cross the swimming finish line and prepare to transition to the 112-mile bicycle ride.

Spectators line the streets in Verona to cheer on the competitors.