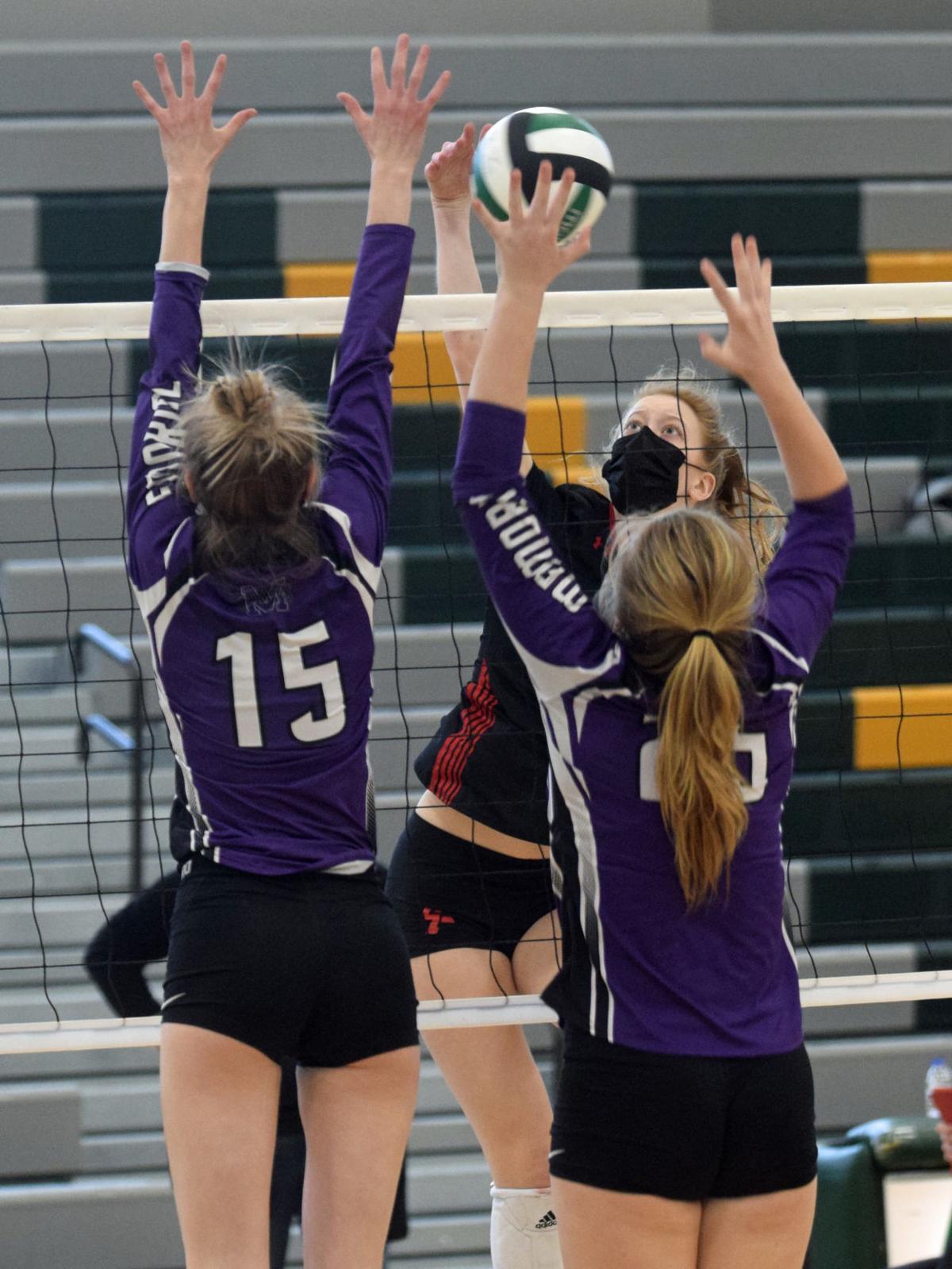 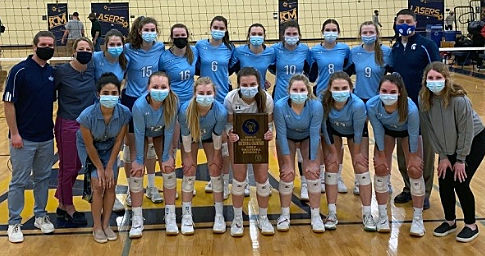 The McFarland girls volleyball team stops for a photo after winning its WIAA sectional at Wales Kettle Moraine on Tuesday. 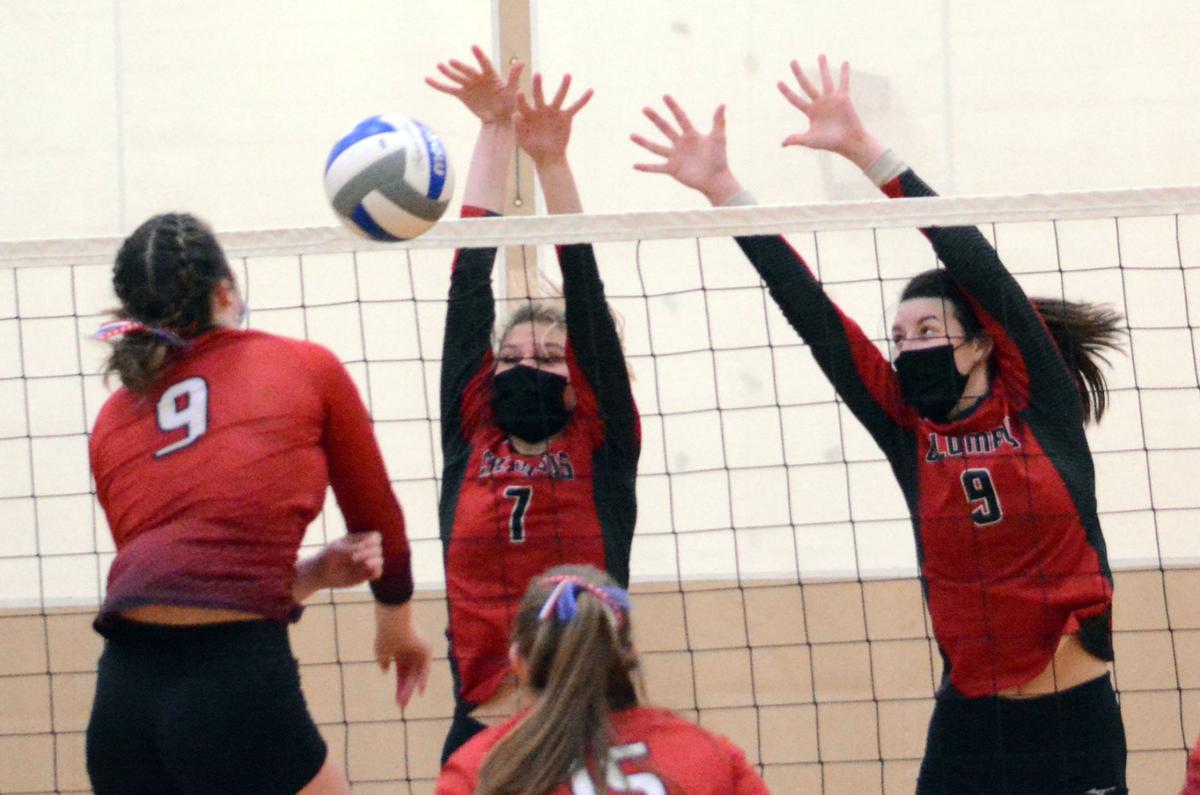 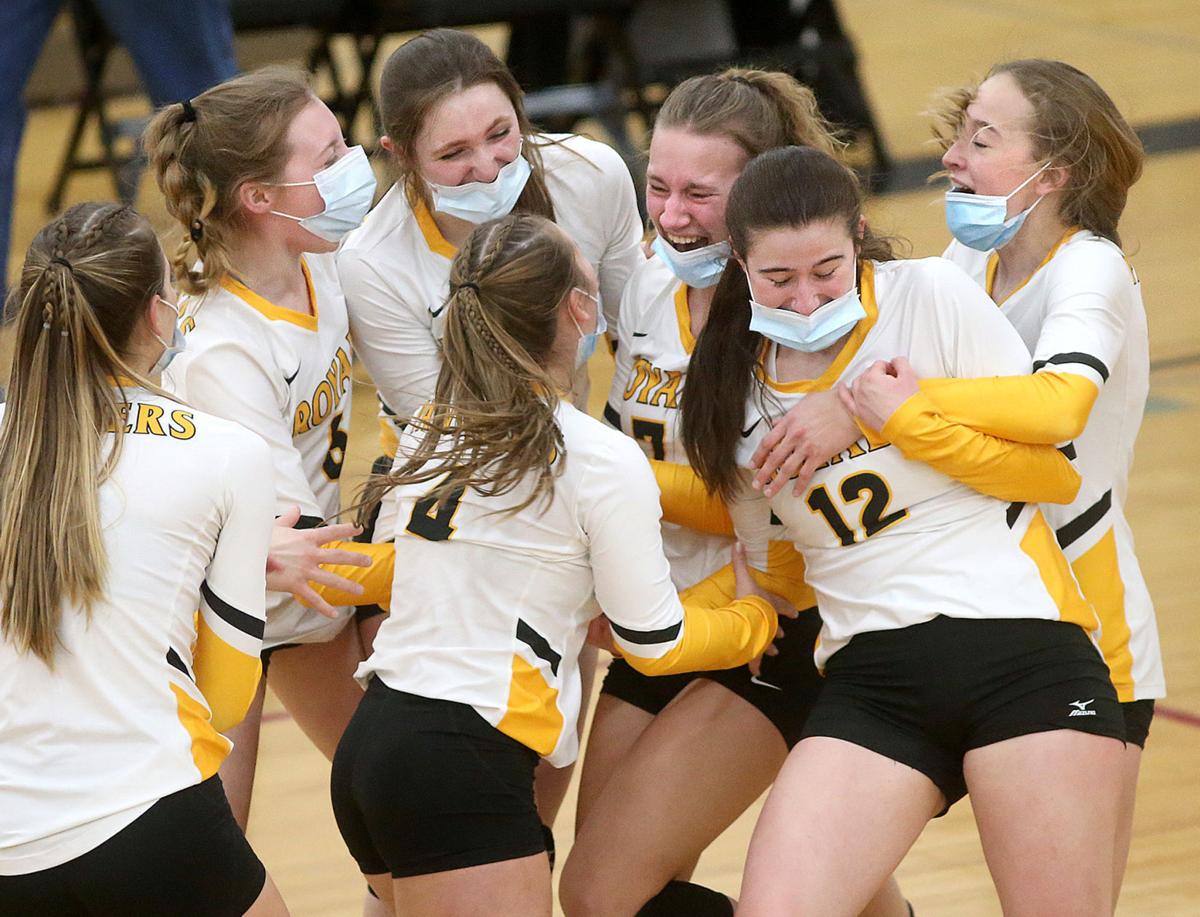 When: Thursday (girls semifinals) and Saturday (all finals).

Tickets: A limited number of tickets will be offered through participating schools for $11.

Live streaming, statistics: All remaining tournament matches will be streamed live on the WIAA.TV portal of the NFHS Network by subscription ($10.99 per month). Archived streams will be available on demand 72 hours after the event. Live statistics will be available at www.wiaawi.org/Sports/Fall/Girls-Volleyball/Tournament (girls) or https://www.wiaawi.org/Sports/Fall/Boys-Volleyball/Tournament (boys).

Tournament program: A program including rosters, schedules, statistics and tournament history, is available for free download in PDF form at https://bit.ly/2PULIoz.

Format: All matches will follow a best-of-five, rally-scoring format. Due to the reduced spring field (115 girls programs and 16 boys programs entered the tournament), the girls tournament features four teams in both divisions and only the final remains in the boys tournament.

Sun Prairie, ranked 10th by the state coaches’ association, earned the No. 3 seeding after a 10-3 regular season that included a 5-2 mark against Big Eight Conference opponents. Coach T.J. Rantala, 432-145 in 13 years with the Cardinals, takes a four-match winning streak into state, capped by a five-set victory over DeForest in its sectional final that went to 15-13 in the fifth set. The Cardinals’ last loss was a sweep by top-seeded Appleton North; prior to that, Sun Prairie’s other losses both came against Verona. This is the Cardinals’ sixth state trip since 2012, but the Cardinals are 2-6 at state, with quarterfinal wins (and semifinal losses) in 2013 and 2016. Payton Addink, a 6-1 senior outside hitter, is the straw that stirs the drink for the offense, leading the team with 152 kills, 443 assists and 21 service aces. She also has 118 digs to rank second behind the 162 digs of 5-5 senior designated setter Haley Winter. Maggie Allaman, a 5-11 senior middle blocker, has 29 blocks and 94 kills, and 5-8 junior Lily Schellpfeffer has added 115 digs.

Manitowoc, ranked fifth, qualified with a 3-1 victory over state second-ranked Oshkosh West on Tuesday. It was the Fox River Classic Conference champions’ 12th consecutive victory. Coach Mary Beth Dixon is 549-211 in 20 years at Manitowoc and 869-240 in 35 years overall. The Ships have gotten 200 kills and 45 service aces from 5-10 junior outside hitter Mary Satori, and 5-4 senior setter Lauren Delmore has 441 assists. Lauren Borchardt, a 5-8 senior outside hitter, leads with 164 digs, followed by Satori with 146 and 5-3 senior Brooke Parish with 140. Lindsey Pankratz, a 6-foot senior middle blocker, has 13 blocks.

McFarland, typically a Division 2 team, is playing in Division 1 because of the condensed number of teams playing in the fall-in-the-spring field. McFarland advanced to the Division 2 state final in 2019, falling to Luxemburg-Casco in their first state trip since their debut in 1982. Coach Trish Fortune’s eighth-ranked and fourth-seeded Spartans, who finished second in the Rock Valley Conference behind Whitewater, beat Mount Horeb and Edgerton to win their sectional. Their only regular-season losses came in a five-setter against Whitewater and a sweep against state semifinalist Manitowoc. Fortune is 426-224 overall. On offense, 5-11 junior outside hitter Avery Pennekamp leads McFarland with 144 kills and 5-9 junior setter Maddy Fortune has 358 assists and 26 aces. McFarland averages 3.1 service aces per set. Alyssa Davis, a 5-6 senior libero, has a team-best 121 digs, and 6-1 sophomore middle hitter Gwen Crull has 19.5 blocks.

Appleton North, ranked first and seeded first, has had just this side of a perfect season so far. Coach Steve Scheuerell’s Lightning are not only 13-0 overall, they have lost only one set all season, against second-ranked Oshkosh West in the fourth match of the year. That gives North a set record of 37-1. Scheuerell is 312-141 in 13 years with Appleton North, which lost in a quarterfinal in 2019 and hasn’t advanced past the semifinals in its previous five state trips. North’s 5-11 junior outside hitter, Brianna Cantrell, leads the offense with 101 kills, and 5-7 senior setter Brooke Bolwerk has 357 assists. Madisen Miller, a 5-8 junior libero, has a team-best 93 digs and 26 service aces, and 6-foot senior middle blocker Bella Van Lannen has 14 blocks.

Brodhead, ranked second by state coaches, earned the top seed despite an 11-3 record after beating top-ranked Laconia in five sets in its sectional final. Coach Erin Kammerer’s Cardinals finished third behind Whitewater and state qualifier McFarland in the Rock Valley Conference, losing to both during the regular season along with Janesville Craig. Kammerer is 213-147 in 11 years at Brodhead. It’s the team’s third state trip and first since 2013. Abbie Dix powers the Cardinals’ attack, as the 5-11 sophomore middle hitter leads the team with 178 kills, 134 digs and 25 blocks. Alexis Kammerer, a 5-7 sophomore setter, has 381 assists and 27 service aces, and 5-6 junior setter Madison Kail has 30 aces.

Washburn, ranked fourth and seeded second, beat Chequamegon and Algoma to advance to state for the fourth time and the first since 2002. First-year coach Jenna Galligan’s Castle Guards have had a nearly perfect season, losing only one set (to South Shore) in 16 matches for a 48-1 set record. South Shore, an honorable mention pick in the state rankings, is the only ranked team Washburn has played. The Indianhead Conference champs won the Division 3 state title in 2000. The Castle Guards’ apparently incomplete statistics show 5-10 senior middle blocker Lily Wheeler as the kills and service aces leader and 5-7 senior setter Riley Johnson as the assist leader.

Fond du Lac St. Mary’s Springs, ranked third and seeded third, beat Campbellsport and eighth-ranked Sevastopol to earn its first state berth as a WIAA program. Fifth-year coach Michelle Born’s Ledgers suffered their only loss in a five-set, midseason match to Laconia and finished second to the Ledgers in the Wisconsin Flyway Conference. On the front line, 5-9 senior right-side hitter Isabelle Coon has 113 kills and 5-7 senior outside hitter Kendall Ahern has 111. The assist leaders are 5-7 freshman setter Greta Pleuss with 176 and Coon with 166, and Coon leads with 35 sevice aces. Coon and 5-8 senior middle blocker Taylor Rowe lead with 15 blocks. Libero Bella Bauer, a 5-6 senior, has 118 digs.

Middleton has qualified for its first-ever state final after going 2-11 in 11 prior state trips. Rob Kleinschmidt, in his first year as the Cardinals’ coach and seventh year overall, takes a six-match winning streak to state that includes a victory over Fond du Lac, the first team to beat Middleton. The Cardinals also lost a 25-17, 25-21, 25-19 home decision to Kimberly on March 20. Cole Sweitzer, a 6-4 junior outside hitter, leads the Cardinals with 102 kills. Nick Stott, a 6-2 senior setter, has 294 assists, and 6-1 junior libero Colton Tuffs has a team-best 50 digs. Ruben Emmerich, a 6-4 senior middle hitter, leads with 31 blocks and 15 service aces.

Kimberly, the 2019 state champion and 2018 runner-up, advanced to state for the third consecutive year and third time overall after a four-set win over Appleton North on Tuesday. The Papermakers beat Germantown in the 2019 final. This year, seventh-year coach Matt Seidl saw his team take second in the Fox Valley Association, suffering its only two losses of the season against conference champion Kaukauna. Cooper Polczinski, a 6-3 senior outside hitter, leads the team with 213 kills and 6-4 junior outside hitter Hayden Karpinski has 152. Setter Connor Hussey, a 6-3 senior, has 558 assists; 5-10 senior libero Dylan Nelson has 132 digs; 6-8 senior middle hitter Jaxon Schroeder has 44 blocks.

The Cardinals senior, bound for Minnesota-Duluth in the fall, adjusts to lineup changes and an unprecedented spring volleyball season

Hildebrandt was a first-team all-conference selection for girls basketball in the Rock Valley Conference in 2019-20.

Prep sports: In the long run, Brodhead proves too much for Royall in Division 2 girls volleyball semifinal

Thursday’s first set was a marathon.

The McFarland girls volleyball team stops for a photo after winning its WIAA sectional at Wales Kettle Moraine on Tuesday.