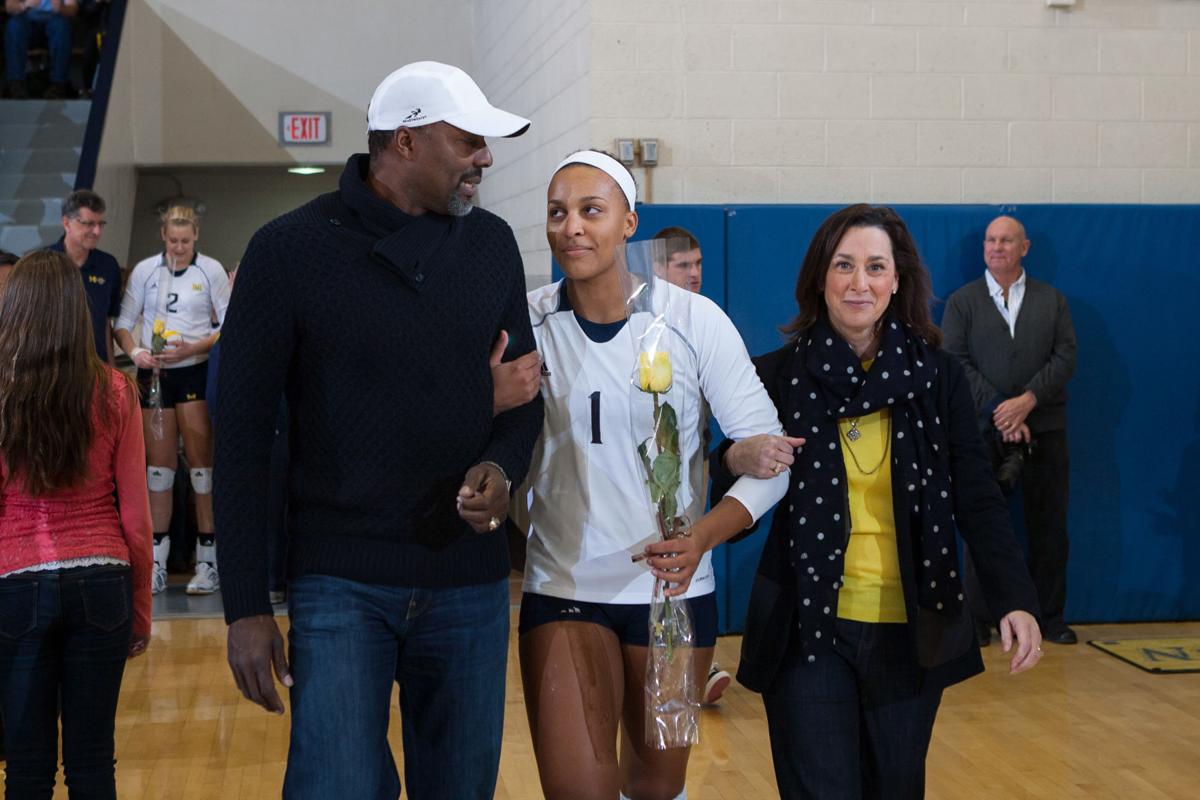 Former Middleton volleyball standout Molly Toon celebrates her Senior Day at Michigan with her parents, Al and Jane, on Nov. 27, 2013. 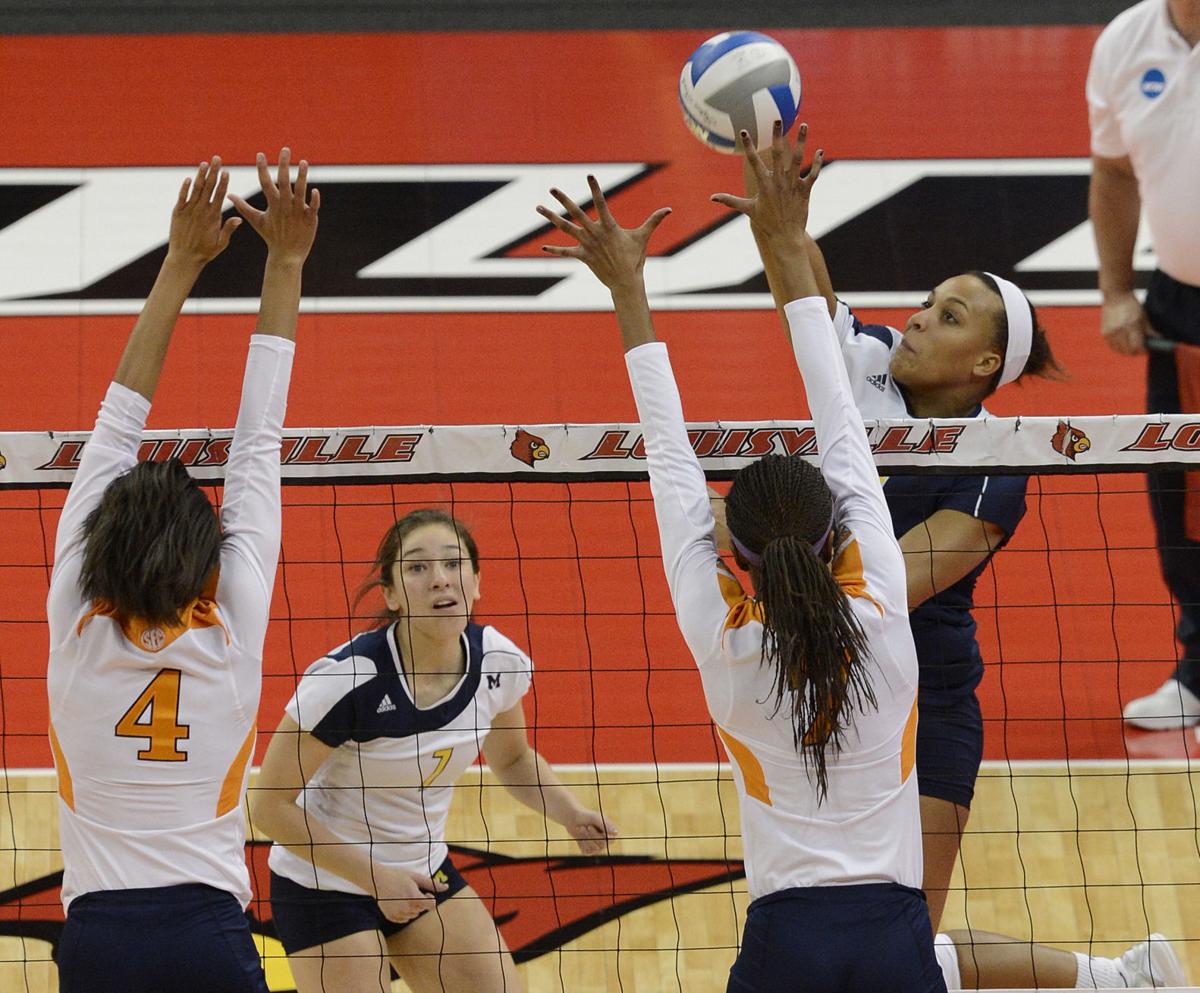 Michigan's Molly Toon, right, attempts to score over the defense of Tennessee's Olivia Okoro, right, and Tiffany Baker during a first round match in the NCAA Division 1 women's college volleyball tournament on Thursday, Nov. 29, 2012, in Louisville, Kentucky.

On Monday, police identified the couple as Molly Elizabeth Lillard, 28, and Royce Dale Lillard III, 36, in a press release, according to an azcentral.com report (The Arizona Republic).

Molly Toon, a 2010 Middleton graduate, was an outside hitter who was a four-year varsity girls volleyball player, a two-time captain, a two-time all-Big Eight Conference selection and twice led her team (2008 and 2009) to state prior to playing at Michigan. She also was a two-time second-team All-State player in high school, according to her Michigan bio.

Franco Marcos, her girls volleyball coach at Middleton, said in a phone interview with the State Journal Monday night that he was told Monday about his former player’s death.

“I coached her prior to high school in a club season and then four years in high school,” said Marcos, who’s now volleyball coach at Madison Country Day. “Knowing the family and Al, it’s really hard to hear a story like that. … It’s sad. I really don’t know what to say. It’s such a tragic loss and the way it happened.”

According to the Arizona Republic newspaper report, Royce Lillard III of Scottsdale, who was suspected of fatally shooting his wife, barricaded himself in his home and was later found dead of an apparent self-inflicted gunshot wound Sunday, according to the Scottsdale Police Department.

Police responded to a shooting in east Scottsdale at around 5 p.m. Sunday and found a woman with gunshot wounds in front of a house. The woman was taken to a hospital, where she died from her injuries, according to the report.

Police said the shooter, who was the victim's husband, went back inside the house.

The couple's 8-month-old child also was present during the shooting, but was not injured and is currently in the care of family, according to the report.

Marcos, who coached Middleton for 23 years and led the Cardinals to four WIAA state tournament appearances (2001, 2002, 2008 and 2009), said after Molly Toon’s outstanding playing career at Middleton that “she went off and had a great career at Michigan.”

She was a four-year varsity letterwinner as a 6-foot outside hitter at Michigan from 2010-2013. She received All-American honorable-mention recognition from the American Volleyball Coaches Association as a senior in 2013.

Marcos said he learned the news of her death after a current player at Madison Country Day recently died of a medical condition.

Al Toon played at UW from 1982-84, compiling 131 receptions for 2,103 yards in three seasons. He’s eighth and sixth, respectively, in those categories at UW.

Molly (Toon) Lillard 'will continue to live on through her sweet little boy,' family says

The former Middleton and Michigan volleyball standout was killed April 11 in what police in Arizona believe was a murder-suicide.

Not only is she an All-American setter for the No. 1 University of Wisconsin volleyball team, she’s also the program’s first ever first-team Academic All-American.

From Estonia to UW: Markus Ilver's unique journey 'like a fairy tale'

“It seemed like the best option for me because it’s a perfect fit for me — the play style, the league, the tradition that Wisconsin has,” Markus Ilver said of joining the Badgers men's basketball program. “I couldn’t say no, you know?”

Former Middleton volleyball standout Molly Toon celebrates her Senior Day at Michigan with her parents, Al and Jane, on Nov. 27, 2013.

Michigan's Molly Toon, right, attempts to score over the defense of Tennessee's Olivia Okoro, right, and Tiffany Baker during a first round match in the NCAA Division 1 women's college volleyball tournament on Thursday, Nov. 29, 2012, in Louisville, Kentucky.

Molly Toon when she was at the University of Michigan