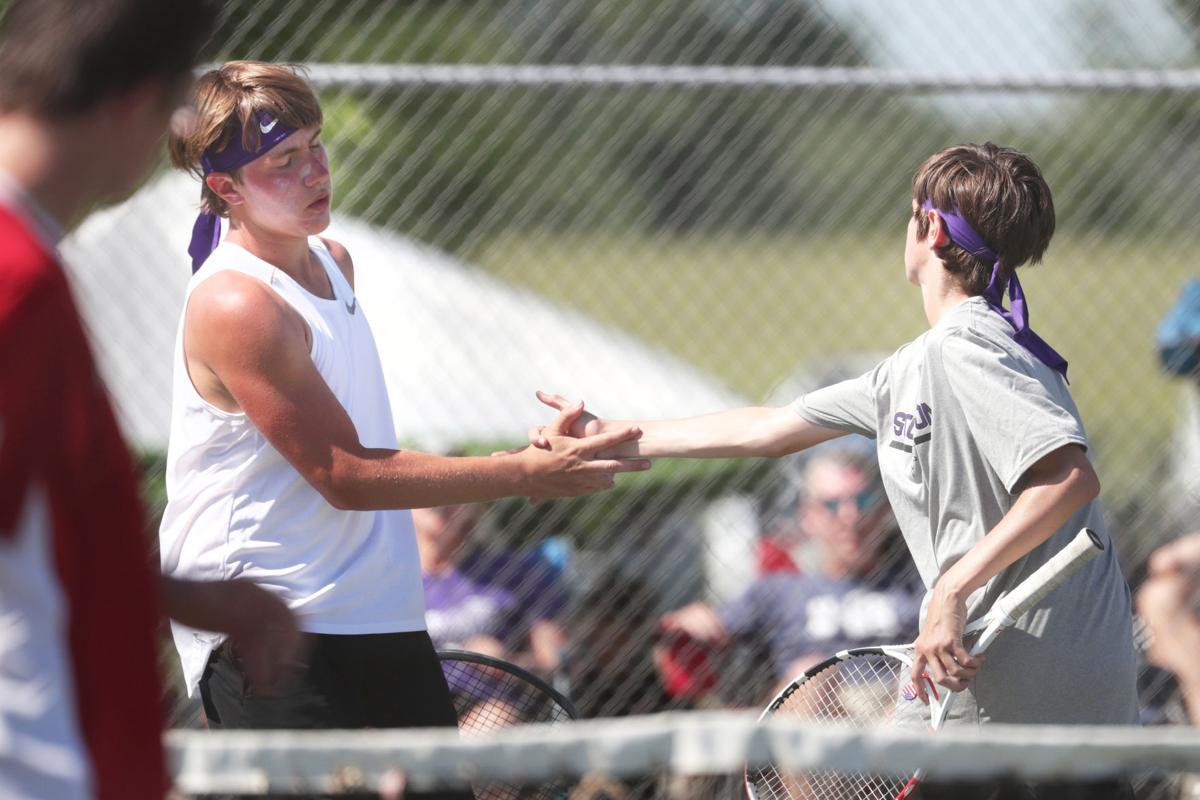 Stoughton's Max Dugan, left, and Hayden Schreier celebrate a point against Milton during the No. 1 doubles title match at the Badger South Conference tournament Friday at Quann Park. 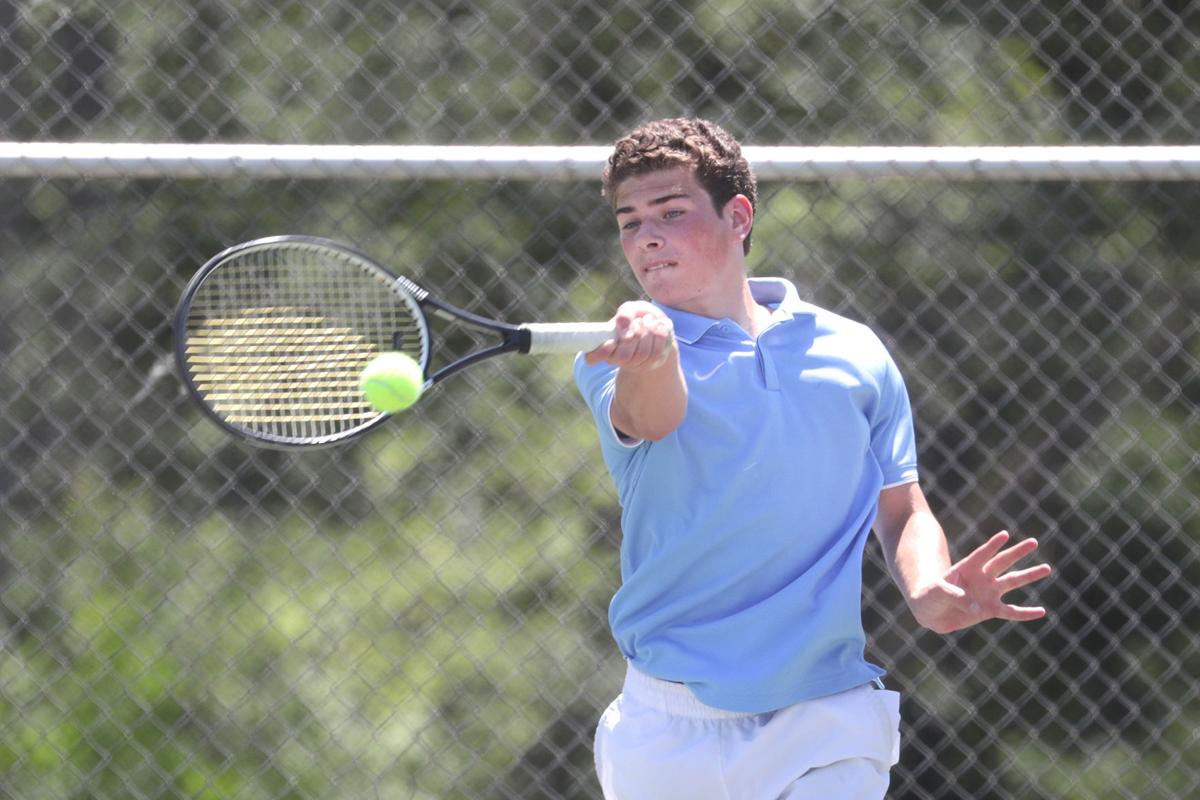 Monona Grove's Chase Lindwall returns a volley during a semifinal match. He finished runner-up to Madison Edgewood's Alex Sviatoslavsky at No. 1 singles.

Dugan doesn’t shy away from an opposing player’s hot shot when he and doubles partner Hayden Schreier are at the net.

The top-seeded team of Dugan, who also has a big serve, and Schreier, a junior, earned the No. 1 doubles title in their first prep year playing together at the Badger South Conference boys tennis tournament in 90-degree weather Friday at Quann Park.

They defeated Milton’s Tate Dunk and Evan Mallon 6-2, 6-2 in the final.

“I think the volleyball has really helped his quick hands because he has to defend so many hard shots coming,” Stoughton coach Amy Kahl said about Dugan. “I notice in the match, he is not fazed at all by kids just whaling at him and he does a great job of getting a lot of balls back.”

Crusaders senior Alex Sviatoslavsky claimed the No. 1 singles championship with a 6-2, 6-2 victory over Monona Grove junior Chase Lindwall in the title match.

“I felt confident,” said Sviatoslavsky, the WIAA Division 2 state runner-up in 2019. “I focused every point. I worked through the heat. It was good to get that momentum from the first two matches. They went pretty quick and it helped me get into the cool (in a shaded area) and get me ready for the last match. When I was out there, I gave it my all and it worked out.”

Sviatoslavsky, who plans to study business at the University of Wisconsin and play club tennis, was swarmed by his teammates after his victory.

“We have a team tradition this year where when we win a match, the last doubles team or player coming off the court, we wait in silence for them to get off the court and then just go crazy,” he said.

“Two doubles got the big win,” Edgewood coach Alex Mory said. “They were the (No.) 2 seed and they beat the (No.) 1 seed, and they played the most fantastic tennis I’ve seen them play. Alex did his job. It’s great. Everyone else, we did consistently throughout, and I think that’s great.”

Dugan, who didn’t get to play tennis last year because the WIAA spring season was canceled due to the COVID-19 pandemic, believes he and Schreier have formed a solid team that he hopes can reach the state tournament.

“It’s been a little up and down, but today was definitely a good day,” Dugan said after they won three matches. “We had good serves.”

Added Schreier: “It’s been great. I think we have great chemistry. We both have good strengths and work together to help us win. He serves well and then we can finish the point, because it sets us up for a nice shot. We have good volleys, too.”

Schreier, who played singles as a freshman in 2019, said winning the conference title was important for postseason seeding.

Kahl, who said the duo improved to 16-3, indicated it also was meaningful for the program.

“For No. 1 doubles, it’s been a while, a long while,” Kahl said about a Stoughton No. 1 boys doubles team winning a conference title. “They have really improved with each match as the season has gone on. They are super coachable, wanting to do well for each other. I think that’s such a big part of doubles. Yes, you want to do it for yourself, but caring so much to help your partner to have success, I think that’s what they do so well.”

Other conference champions included Monona Grove’s Lance Nelson at No. 2 singles and Owen Dziedzic at No. 4 singles, Oregon’s Kyle Barnish at No. 3 singles and the Watertown team of Jake Olszewski and Eli Zubke at No. 3 doubles.

Despite the 7-5 loss, Monona Grove still claims the outright title in the Badger South Conference.

Ramberg has taken over as coach this season for the Poynette program, which won five state championships, including WIAA Division 3 titles in 2018 and 2019, and had four state runner-up finishes in 11 state appearances under Tomlinson.

The senior captain and 2019 individual state runner-up hopes to compete for WIAA individual and team championships.

The Edgewood girls win the Badger South track and field meet for the first time, while Monroe earns the boys conference crown.

Sun Prairie's Jacob Baldwin and Nikko Vilwock win the No. 1 doubles title at the WIAA Division 1 sectional at Quann Park.

Madison West's Ethan Yu earns the No. 5 seeding in what could be a wide-open Division 1 singles field.

Stoughton's Max Dugan, left, and Hayden Schreier celebrate a point against Milton during the No. 1 doubles title match at the Badger South Conference tournament Friday at Quann Park.

Monona Grove's Chase Lindwall returns a volley during a semifinal match. He finished runner-up to Madison Edgewood's Alex Sviatoslavsky at No. 1 singles.