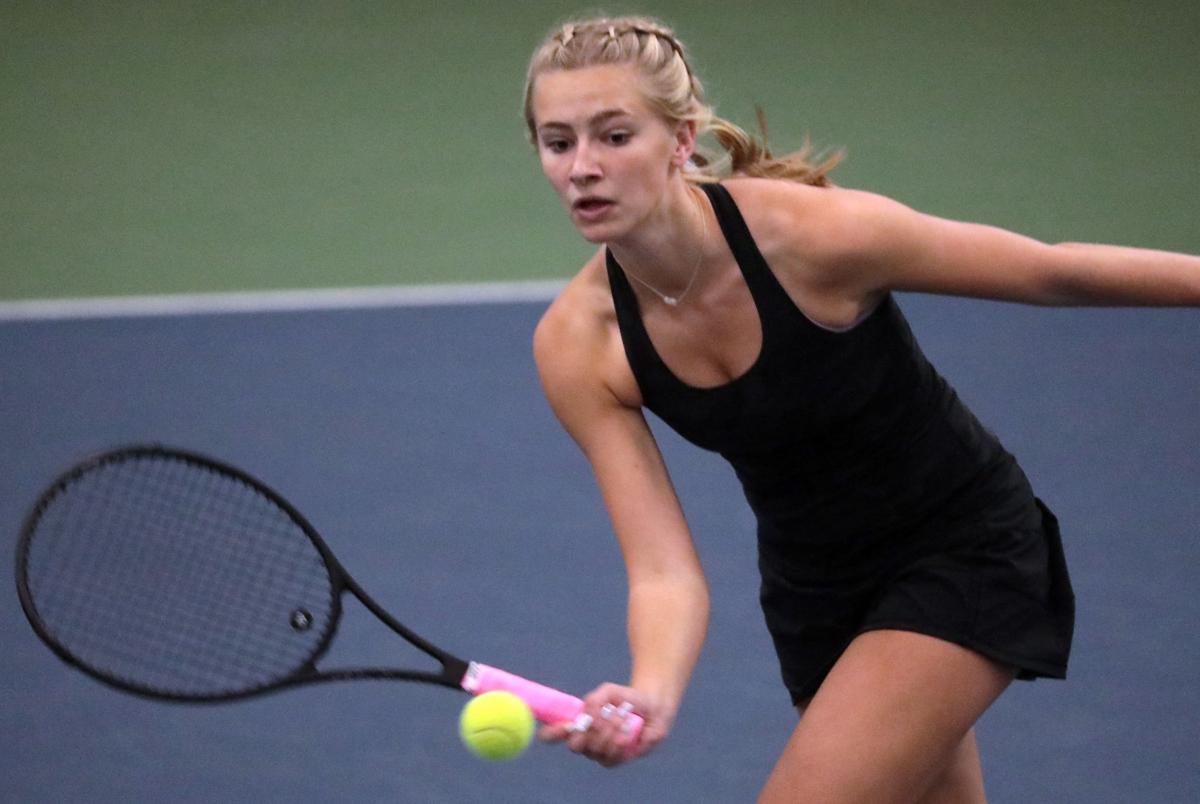 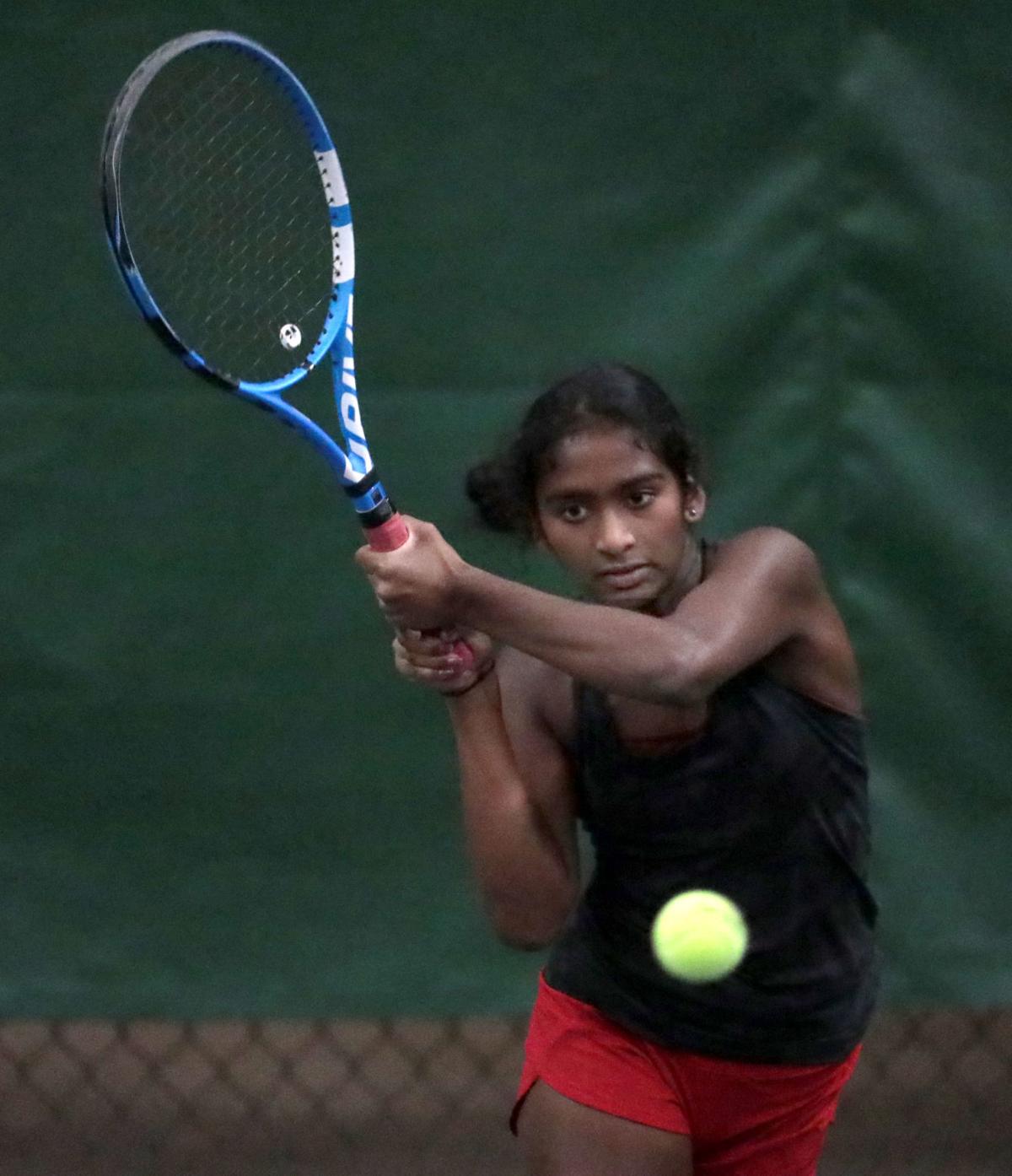 Olson struck crisp groundstrokes and powerful serves. She hammered overheads. And she deftly angled winning volleys after nicely setting up points and coming to the net at the right moment.

Toss in an occasional well-placed lob and the top-seeded and undefeated Olson turned in a dominant performance against second-seeded Lauren Lindow, a junior from East Troy, at the girls individual tournament at Nielsen Tennis Stadium.

Olson closed out a 6-1, 6-0 finals victory with an ace, then heard cheers from family and friends from Edgewood and Madison Memorial, her former school prior to transferring to Edgewood for this school year.

“It means a lot,” Olson said. “I wasn’t really expecting it. I didn’t know who all was going to be here. And it means a lot following `B,’ who’s playing at Delaware State University, and she’s won two. It was really inspiring.”

Olson said she was nervous in her first match Friday. But that nervousness lessened and her confidence grew with each match — right up to the final against the left-handed Lindow (32-3).

“The last match was definitely my best match,” Olson said.

“I loved watching Lily play this weekend,” Edgewood girls assistant coach Rory Hemp Boll said. “She got stronger in every single match. Today her poise and her focus and how she figured out what she wanted to do with each point was masterful.

“She was patient and she waited for the right balls to attack. She was aggressive at the right times and it really paid off. I was very proud of her.”

“I love the environment here,” Olson said. “I think it’s a lot better than what we had last year, for sure (last spring in Lake Geneva). The crowd is so much more fun. I think that helps you, with the fans behind you. … A lot of people came. That was nice.”Olson wasn’t sure what the season would be like playing at a new school and in a different conference. But she said she liked having new opponents to try different shots and figure out winning strategies.

“It makes it more fun,” she said.Olson advanced to the final with a 6-2, 6-1 semifinal victory over fourth-seeded Aubrey Jayne, a freshman from University School of Milwaukee, on Saturday morning.

Lindow earned a 6-1, 7-5 victory over sixth-seeded Jessica Jacobson, a Waukesha Catholic Memorial sophomore, in the other semifinal.

'We were playing for (them)': Middleton girls tennis honors classmates with red ribbons, wins 4 titles at Waunakee sectional

Somasundaram, who finished fifth at the alternate fall state tournament, said she was happy she reached the final four, although she hoped to place higher.

“I think I could have played a little better,” she said. “But I think I improved from last year. My goal was to win the tournament and I did believe I could because of last year.”

Somasundaram dropped a 6-0, 6-0 decision to third-seeded Parker Christensen, an Elkhorn freshman, in the semifinals.

“She’s really consistent,” Somasundaram said about Christensen. “She has a good shot. … She’s a really good player. I think I played pretty well.”

The sixth-seeded Yang, a sophomore, played in Saturday’s consolation round and finished fifth overall. In her first match, she earned a 2-6, 6-2, 6-4 victory over second-seeded Carolyn Schaefer of Milwaukee Divine Savior Holy Angels. Yang defeated Neenah’s fifth-seeded Ava Dunsirn 6-2, 6-2 in the fifth-place match.

Senior Rebecca Daskal and sophomore Isabel Werner of University School of Milwaukee, the top-seeded team, won the Division 2 doubles title. They defeated East Troy juniors Sophia Rondeau and Katie Metcalf, the second-seeded duo, by a 6-2, 6-3 score in the final.

Yang was the singles champion at the girls tennis state tournament for the WIAA’s alternate fall season in the spring in Lake Geneva. She became La Follette’s first girls tennis state champion with a 6-3, 6-0 victory over Lily Olson in an all-area final. Yang entered as the fourth seed.

Olson has transferred to Edgewood from Madison Memorial. She finished as the runner-up to Yang at the alternate fall state tournament during the spring.

Somasundarum finished fifth at the alternate fall state tournament during the spring, falling to Yang in the quarterfinals prior to winning two matches in the consolation round. She helped Middleton earn the team state championship in the spring.

Jiang has moved to No. 1 singles for the Spartans this fall. She and her older sister, Sophia Jiang, finished fourth as a doubles team at state this spring.

Qian reached the state tournament in the spring as a singles player.

Lee is expected to play singles for the Warriors this season. Lee and then-senior Sara Sowinski played doubles last year and advanced to the round of 16 in the WIAA Division 1 girls tennis tournament last fall in Lake Geneva.

Breitbach advanced to the state tournament in the spring as a singles player and, with Naisha Nagpal, should propel the Wildcats' lineup.

Remesh and Wu are set to play No. 1 doubles together this fall. Remesh advanced to the final eight in singles at the spring’s state tournament.

State tournament regulars Middleton and Madison Edgewood are back at Nielsen Tennis Stadium once again. Get caught up on what's in play before quarterfinals begin Friday.

They lose to Eau Claire Regis and Neenah, respectively.