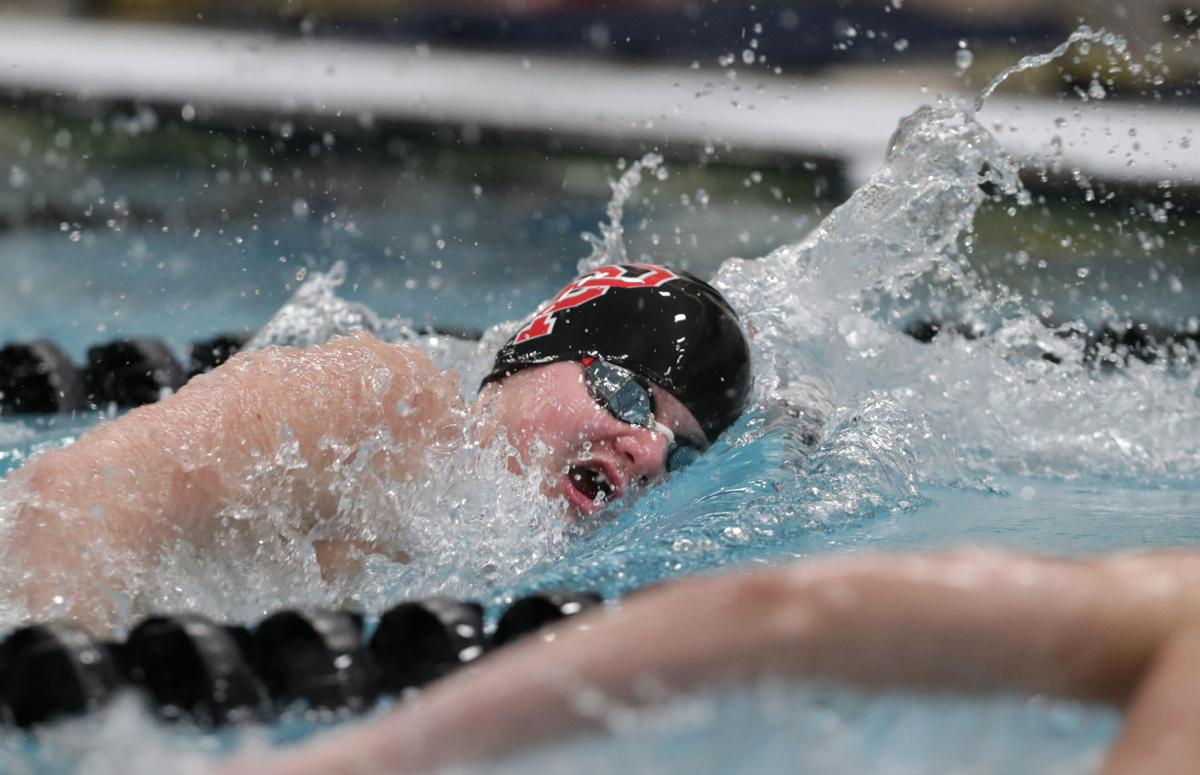 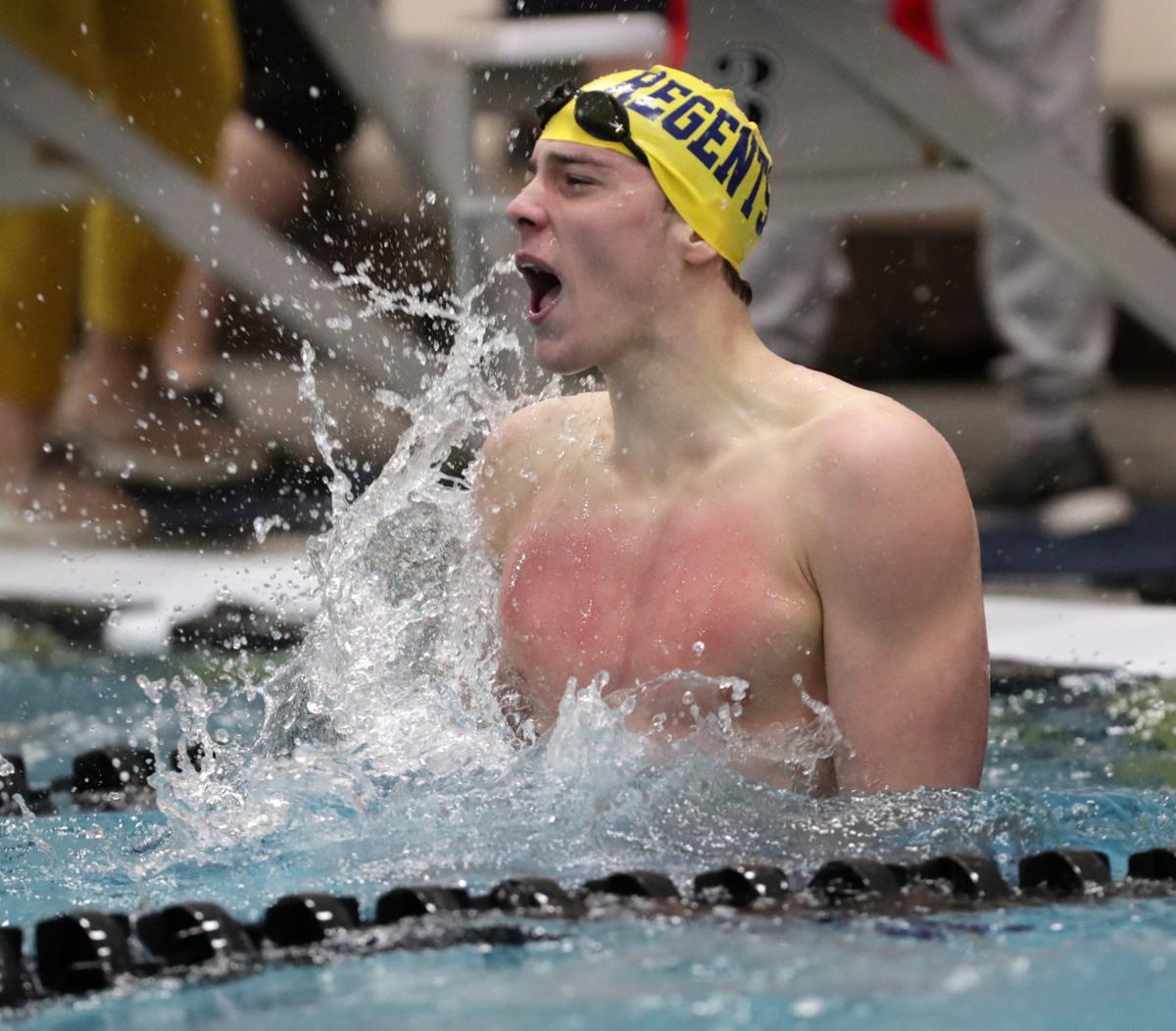 MIDDLETON — The Sun Prairie boys swimming team’s belief that it could win a WIAA sectional championship for the first time was growing with each race Saturday.

And when Sun Prairie junior and second-seeded James Werwie exited the pool with a victory and a personal-best time of 4 minutes, 47.64 seconds in the 500-yard freestyle, the Cardinals’ confidence went through the roof.

“We had a good cushion in the first half (of the meet),” Sun Prairie coach Joel Coyne said. “Once we hit that 500 and James came on and closed out that race, it turned a corner and we really started believing we could pull this meet off. Everybody started buying in (and saying), `Oh, we’ve got this. We’ve got this.’ It was so much fun.”

“Oh, my God, I’m overjoyed, I’m elated,” Coyne said. “I’m feeling proud. Proud is probably the word for a team that started to believe at the end of last season and to get to where we are today. They put in the work and I couldn’t be more proud of their accomplishment today.”

“We were trying to win the sectional, but we were more focused on the state meet next weekend,” Werwie said. “It’s really nice to win this meet. It is a big confidence booster for us, in my opinion.

“We beat Middleton at the Marquette Invitational (earlier this season), but we haven’t beaten them since. So, it was like we proved that we are still one of the fastest teams in the state.”

Wiegand won the 50 freestyle in 20.37 seconds and the 100 breaststroke in a personal-best :57.02, which also was a pool record and school record.

“It means a lot,” Wiegand said about winning the sectional. “But I feel as much as this means, I think we are moving on to state. That is our next goal. This team has come really far in the years I’ve been here, and even in the past 10 years. It’s really cool to see that the success is starting to come.”

Wiegand, who has orally committed to the University of Wisconsin, also was part of two victorious relays – the 200 medley relay and the 200 freestyle. The team of junior Campbell Sullivan, Wiegand, junior J.P. Anhalt and sophomore Ethan Braatz won the medley relay in 1:34.48; and the team of senior Cade Roggenbauer, Anhalt, Braatz and Wiegand won the 200 freestyle relay (1:25.09).

“Coming in, I was focusing on state, trying to make sure I made it there,” Wiegand said. “I wanted to swim fast, but I also wanted to make sure I didn’t screw up or disqualify. The best part of the day was the 200 medley relay. That was an awesome way to start the meet. I thought that really set the tone.“

Madison West senior Isaac Casey-Hrenak, a UW commit, was the 100 freestyle winner in a pool-record time of :45.74 and led the Regents’ runner-up performance.

“It came out just right,” Regents coach Jack Englehardt said. “Everything went according to plan. We had some crazy time drops from some people that (other) people probably didn’t see coming. … I’m super happy with it.”

“For the most part, we swam great,” Middleton coach Danny Lynam said. “We had a few hiccups. We’ve been fighting illness this season and these past weeks, especially. We just didn’t have the momentum we’ve had in past years coming into it. And when you are swimming against teams like Sun Prairie and West, they are going to take advantage of it.”

The junior's best time in the 50-yard freestyle ranks best in the state this year and better than the WIAA state meet record.

Prep boys swimming: Middleton's Nathan Kim turns his versatility into an asset for his team

Middleton takes over No. 1 spot in Division 1 in The Associated Press girls basketball state rankings

Cystrunk plans to attend UW-Whitewater and compete in football and track and field. Peters plans to play women's basketball at North Dakota State College of Science.

The Warriors heat up from 3-point range in the second half of a 79-71 road victory.

The senior forward scores 14 of her game-high 16 points in the second half, rallying Middleton to a 38-32 Big Eight Conference win.

The crown comes after the Cardinals finished second the past two years in the WIAA Division 1 meet.