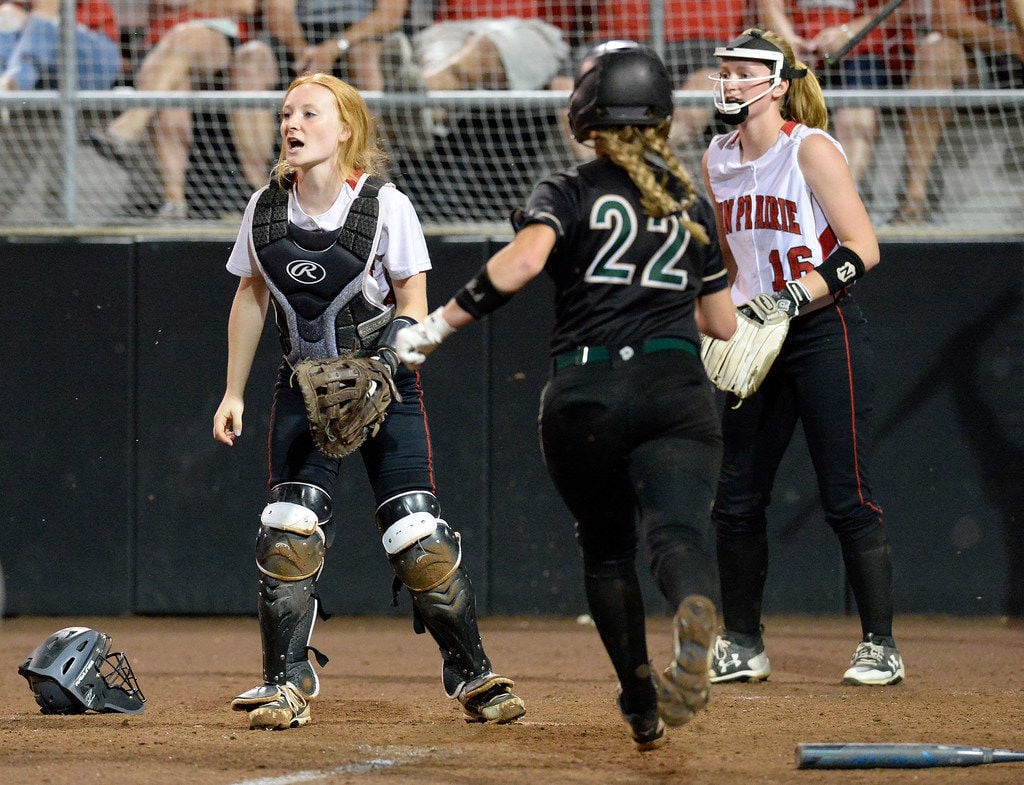 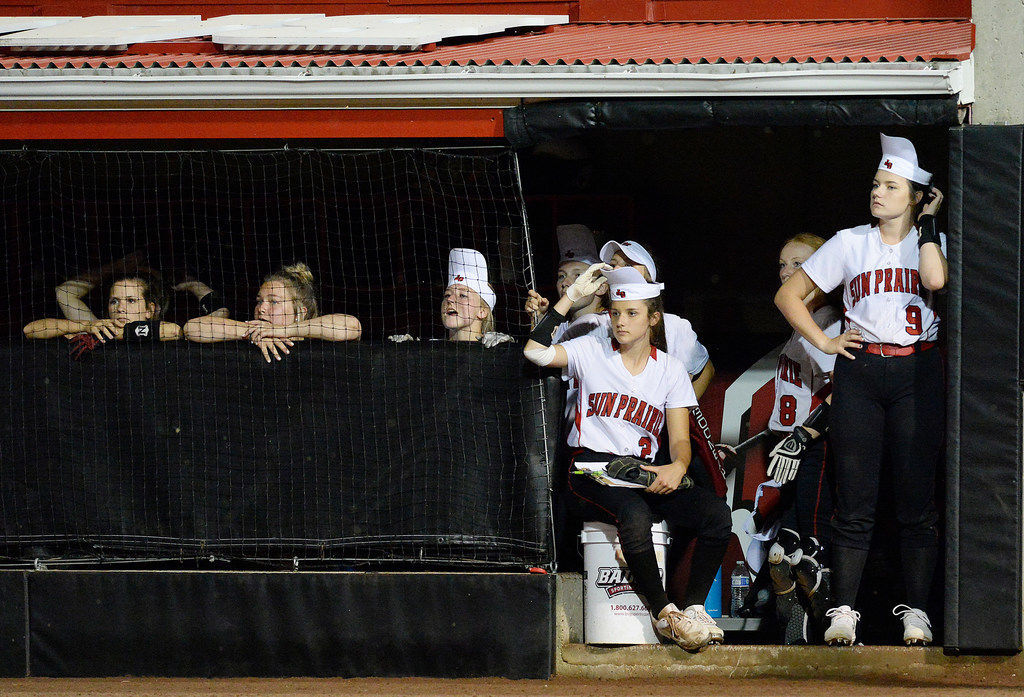 Sabrina Reuter (2), Bailee Hadley (9) and their Sun Prairie teammates watch from the dugout during the ninth inning.

But that didn’t discourage this season’s team. The Cardinals were intent to make a return trip to the WIAA state softball tournament.

“To come back here with only two starters is amazing,” Sun Prairie coach Jamie Olson said. “They should be proud of themselves.”

But the fourth-ranked and second-seeded Cardinals came up short in the title game, falling 4-2 in nine innings to Oshkosh North, which claimed its first state title.

“It’s always wonderful to bring hardware home, back to Sun Prairie,” Olson said. “Second place is not bad, being in Division 1 and still being here until the final end and being one of the top teams in Wisconsin. (It was) not really frustrating, no. They are the No. 1 team in the state and they deserve that victory.”

The Spartans (31-0) scored two runs on one hit, two errors by the Cardinals (27-4) and two walks in the top of the ninth. The back-to-back errors allowed the go-ahead run to score, then Spartans junior catcher Sophie Averkamp came through with a run-scoring single to make it 4-2.

“It was a tough game going into it,” Gardner said. “(Oshkosh North) being undefeated, we kind of knew we had nothing to lose. We knew if we gave it our all and kept fighting until the end … we could do some damage. Unfortunately, we had that rough inning. … But second place is pretty good.”

“It means the world,” Supple said of the title. “These girls and I set out to make history and we accomplished that today. I couldn’t be any more proud of the fight within these girls. … Truly, this has been a dream of ours that we have been working toward since we were little girls.”

After Oshkosh North stranded a runner at third in the top of the first inning, Sun Prairie struck in the bottom of the inning.

With two out and Gardner batting, Radlund surprised the Spartans. She stole home on Averkamp’s throw back to Supple after a pitch to Gardner and scored the game’s first run.

Spartans senior first baseman Brie Gauthier walked to lead off the second inning and reached second on a passed ball with one out, but she advanced no further in the inning.

Oshkosh North tied the game in the third inning on a walk, two Sun Prairie errors and a wild pitch.

Supple scored from second on Gardner’s wild pitch, which deflected wildly off the backstop and careened toward the Spartans’ third-base dugout.

The Cardinals were at it again on the basepaths in the third and took a 2-1 lead.

Freshman catcher Chloe Knoernschild, who beat out an infield grounder to short with one out, stole second and scored on two subsequent errors.

In the fifth, the left-handed swinging Supple helped her cause with a one-out, run-scoring single to center, tying the game at 2-2.

The Cardinals threatened in the sixth when Radlund, who reached on an infield hit, wound up at third after a steal with two out. But Gardner struck out to end the inning.

Sun Prairie had two runners aboard in the eighth, beginning with Hamilton’s leadoff hit, but again couldn’t capitalize.

Capitol North Conference pitcher and player of the year Fountain's performance in the circle and at the plate this season led the Pumas to their second consecutive WIAA Division 3 state championship.

Sabrina Reuter (2), Bailee Hadley (9) and their Sun Prairie teammates watch from the dugout during the ninth inning.