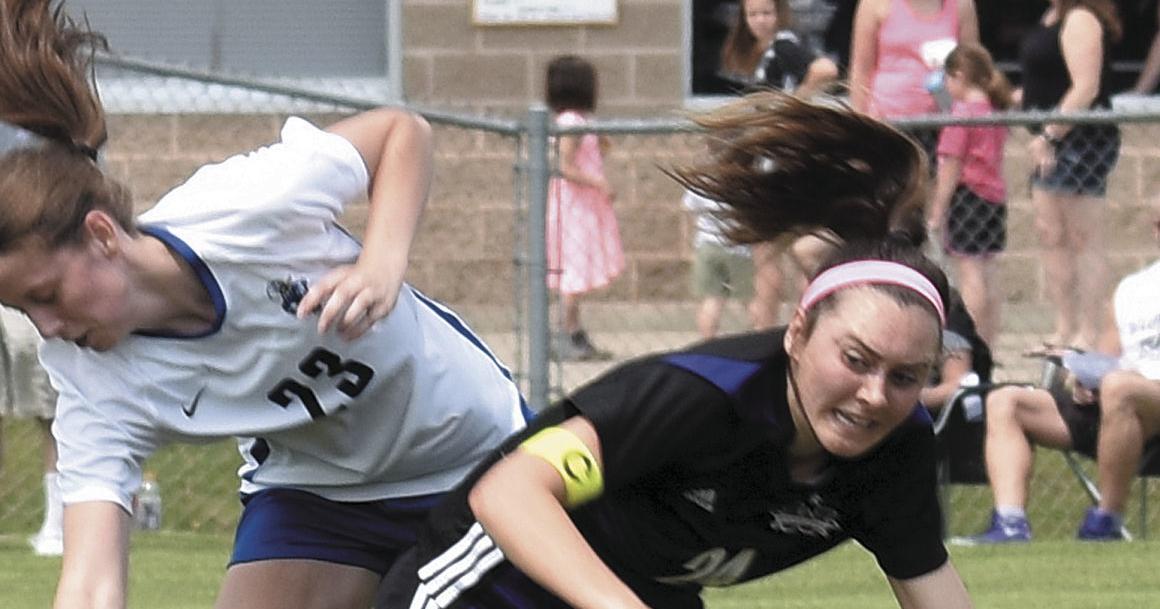 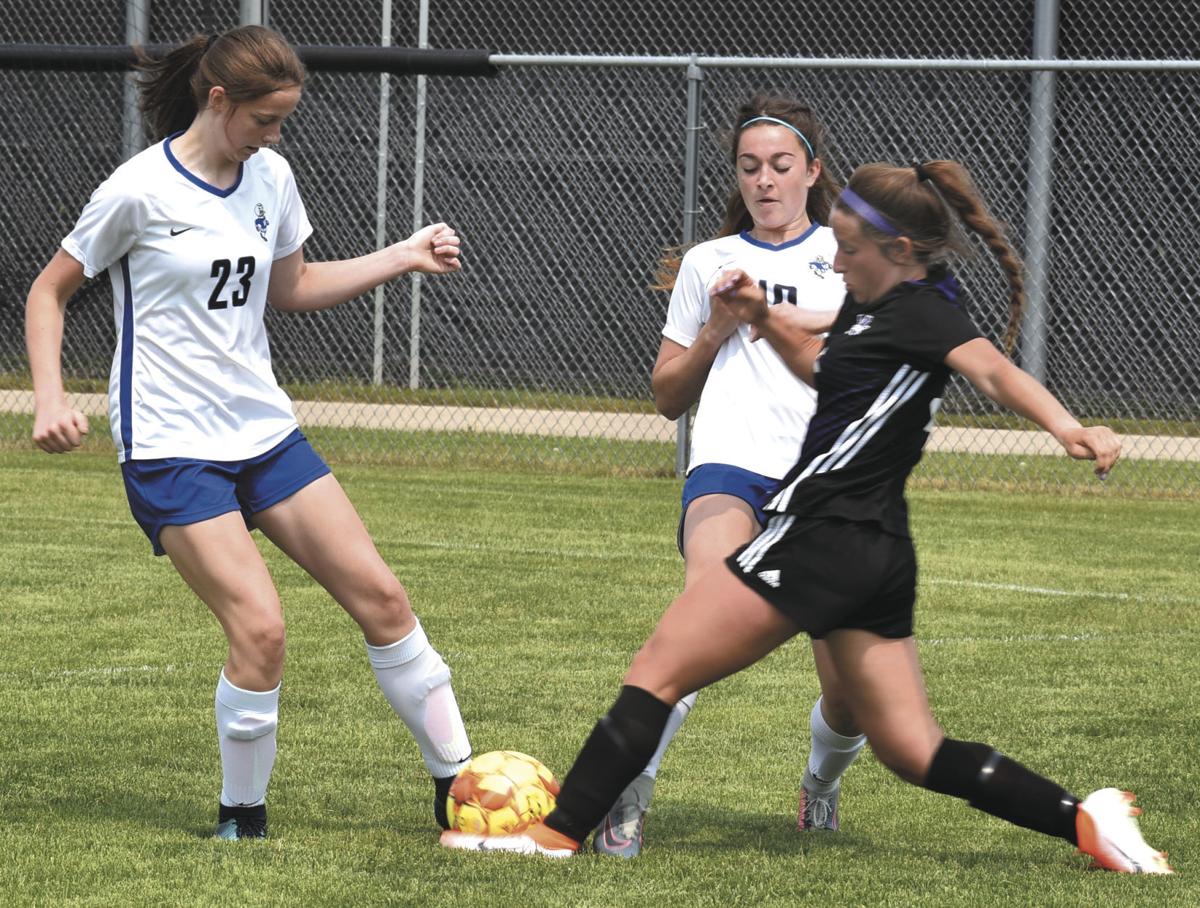 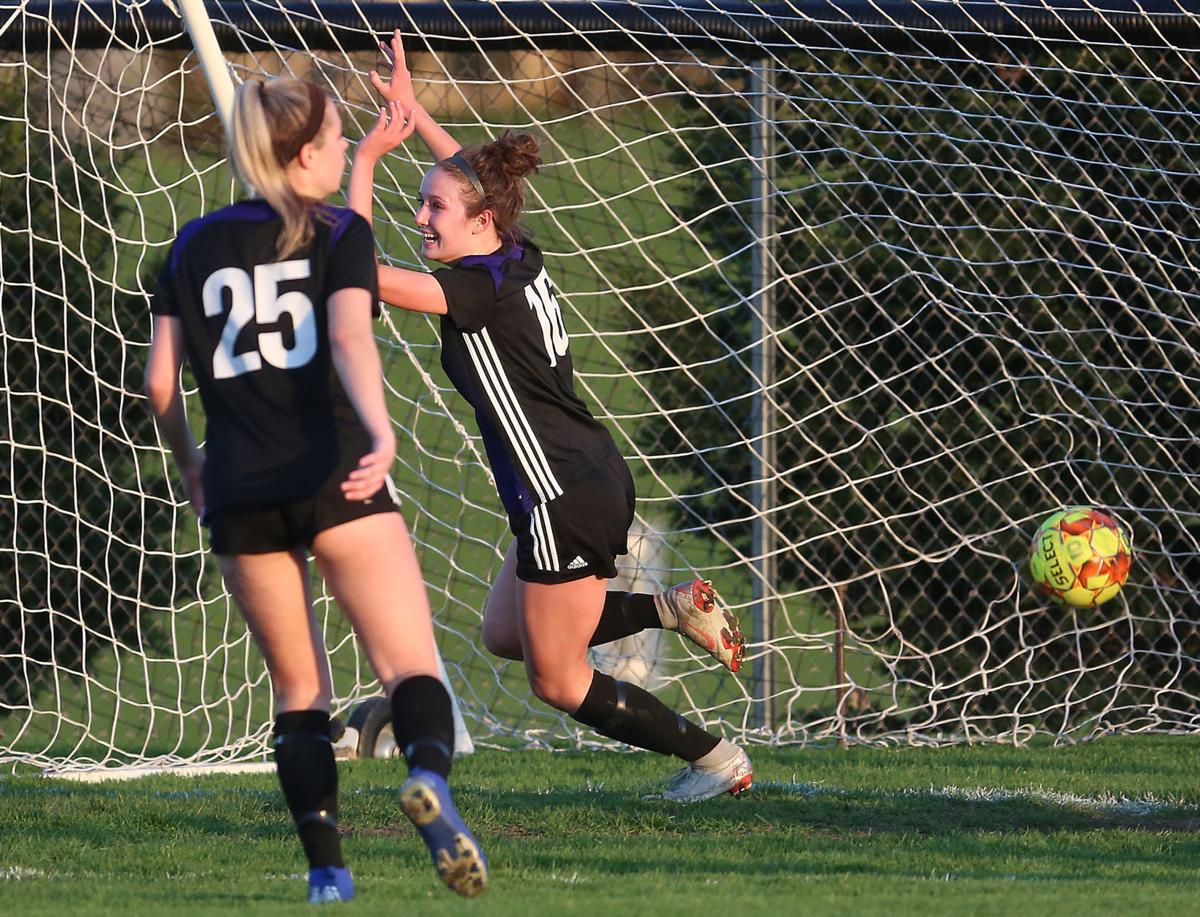 Waunakee's Anne Dotzler celebrates her first-half goal against Middleton on Saturday. Sarah McLaughlin (25) was credited with the assist.

When: Thursday through Saturday.

Tickets/parking: Ticket prices are available at the gate at $8 per session ($1 for children age 6 and younger). Limited parking will be available for a fee at the park.

Live streaming/television: Semifinal games on Thursday and Friday will be streamed live on the WIAA.TV portal of the NFHS Network, with a subscription fee. Championship games will be carried live on FS Wisconsin or the alternate channel FS Wisconsin Plus, as well as at FoxSportsGo.com.

On the Web: Schedules, statistics, sectional brackets and tournament history can be found at www.wiaawi.org/Sports/Spring/Girls-Soccer/Tournament

Bay Port, the defending state champion, is making its third consecutive state trip and is ranked fourth by state coaches. Coach Brooke Mraz’s Pirates lost only to Kimberly and Sheboygan North, and take a nine-match winning streak to state. Junior forward Emma Nagel was a first-team all-state pick last year, and junior Alaina Abel was a second-team honoree. This year, Nagel leads the Pirates with 41 goals and 15 assists, and junior Mac Johnson has 26 goals and 10 assists. Senior goalkeeper Megan Nygaard has a 0.55 goals-against average with 67 saves. Bay Port has allowed 12 goals all season, with 16 shutouts in 23 games.

Oregon, ranked second, earned runner-up honors at state last year, the final year of five consecutive state trips under coach Julie Grutzner. Nelson Brownell has taken over this year and has led the Badger South Conference-champion Panthers back to state, thanks to a 1-0 win over fifth-ranked Sauk Prairie in a sectional final. Junior forward Avary Fanning leads the offense with 18 goals and nine assists, and junior goalkeeper Melia Moyer has 37 saves and a 0.36 goals-against average. Fourteen of Oregon’s 17 games have been shutouts, including the first nine in a row.

Whitefish Bay, the state’s top-ranked team in Division 2 and overall, is looking for what would be its ninth state championship in this, its 20th state appearance. Coach Robby Dubinski’s North Shore Conference champions beat eighth-ranked Waukesha West, 4-0, in a sectional final. Sophomore forward Maggie Starker leads the offense with 24 goals and 27 assists, and sophomore midfielder Molly Keiper has 20 goals and 14 assists. Junior goalkeeper Elena Deslongchamps has 95 saves and a 0.55 goals-against average, and the Blue Dukes have 14 shutouts.

Marshfield earned its first state visit with a 2-1 victory over Onalaska in last week’s sectional, following a fourth-place finish in the Wisconsin Valley Conference. Coach Steve Lindner’s Tigers are led by junior forward Nina Hashimoto with 38 goals and eight assists, and junior goalkeeper Mikayla Brueggen has 147 saves and a 1.65 goals-against average.

Green Bay Notre Dame, ranked fifth, is the defending state champ and is making its 12th state appearance and fourth in the last five years. Coach Bob Rickards’ Tritons took fourth in the Fox River Classic Conference, suffering four consecutive losses and a draw to close the regular season, but beat Appleton Xavier, 2-1, in a sectional final. Senior Jenna Cuene leads the offense with 11 goals and seven assists, and freshman goalkeeper Carlene Goral has 78 saves and a 1.43 goals-against average.

Waukesha Catholic Memorial, the top-ranked Division 3 team, will seek what would be a WIAA-leading 11th state championship. Coach John Burke’s Crusaders had a string of six consecutive championships halted by Green Bay Notre Dame in last year’s final. Catholic Memorial beat Grafton, 2-1, in a sectional last week after a runner-up finish in the Classic 8 Conference. Junior Lauren Brown was a first-team all-state pick at forward last year, and junior midfielder Emma Westrick earned honorable mention. This year, Brown has 27 goals and 20 assists for a team-high 74 points, and Westrick has eight goals. Also, senior forward Abby Plette has 19 goals and 16 assists. Freshman goalkeeper Marina Evert has 94 saves and a 0.77 goals-against average.

Ashland is making its fourth state trip but first since a string of three consecutive berths ended in 2015. Coach Jonny BeBeau’s Oredockers, champs of the Great Northern Conference, beat Medford, 5-0, in a sectional final. Sophomore Claire Custer leads Ashland with 20 goals and 15 assists, and senior goalie Judith Wolfers has 21 saves and a 0.30 goals-against average. Ashland started the year with nine consecutive shutouts and has 18 overall.

Racine Prairie, ranked No. 1 and seeded first, is back at state for the first time after winning the 2016 title. Coach Corey Oakland’s Hawks beat Kenosha St. Joseph, 6-1, in a sectional final after winning the Metro Classic Conference. Junior forward Kate McPhee has 31 goals and one assist, and senior Cate Patterson has 19 goals and 25 assists. Goalkeeper Claire Coffman, a senior, has a 1.62 goals-against average.

Jackson Kettle Moraine Lutheran is making its first state trip since winning Division 3 titles in 2009 and 2011. Coach Brian Hoerchner’s Chargers lost their first six games and took third in the East Central Conference, and ended the season by losing four of six. But the Chargers beat fourth-ranked Hartland Lake Country Lutheran, 1-0, in a sectional final. Sophomore Maya Bell has 20 goals and seven assists, and junior goalkeeper Faith Zuleger has 256 saves and a 1.76 goals-against average.

Oostburg, ranked third, last appeared at state in 2016, but made it this year with a 1-0 win over Kohler after a runner-up finish in the Big East Conference. Coach Ryan Ohlfs’ Lady Dutch take a 13-0-1 hot streak to state, including four straight shutouts in the tournament. Junior forward Gia Minneci and freshman forward Gracie Mihm lead the offense with 24 points each, and senior goalkeeper Skylar Ternes has 80 saves and a 0.24 goals-against average.

Farnsworth always figured if she played any sport in college, it would be basketball. That plan changed last April after a talk with the Waunakee soccer coaching staff.

Sisters combine to score all of the Crusaders’ goals.

Waunakee's Anne Dotzler celebrates her first-half goal against Middleton on Saturday. Sarah McLaughlin (25) was credited with the assist.