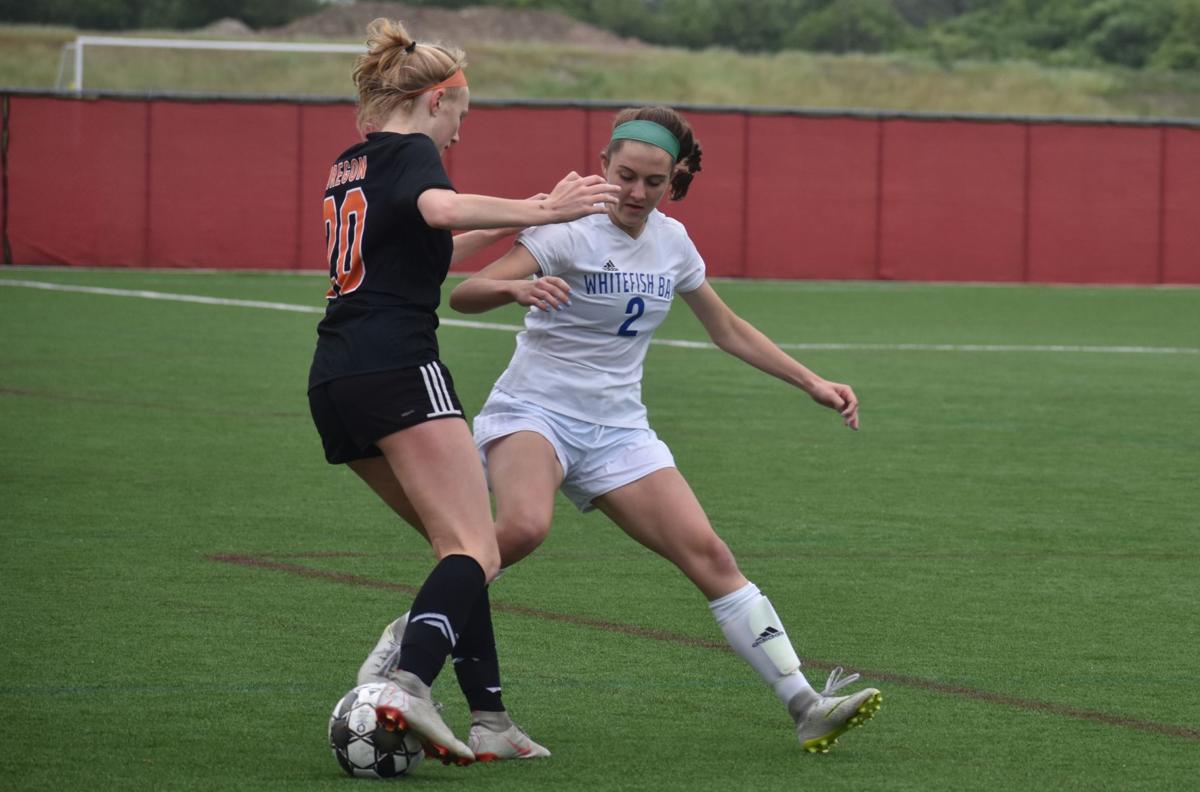 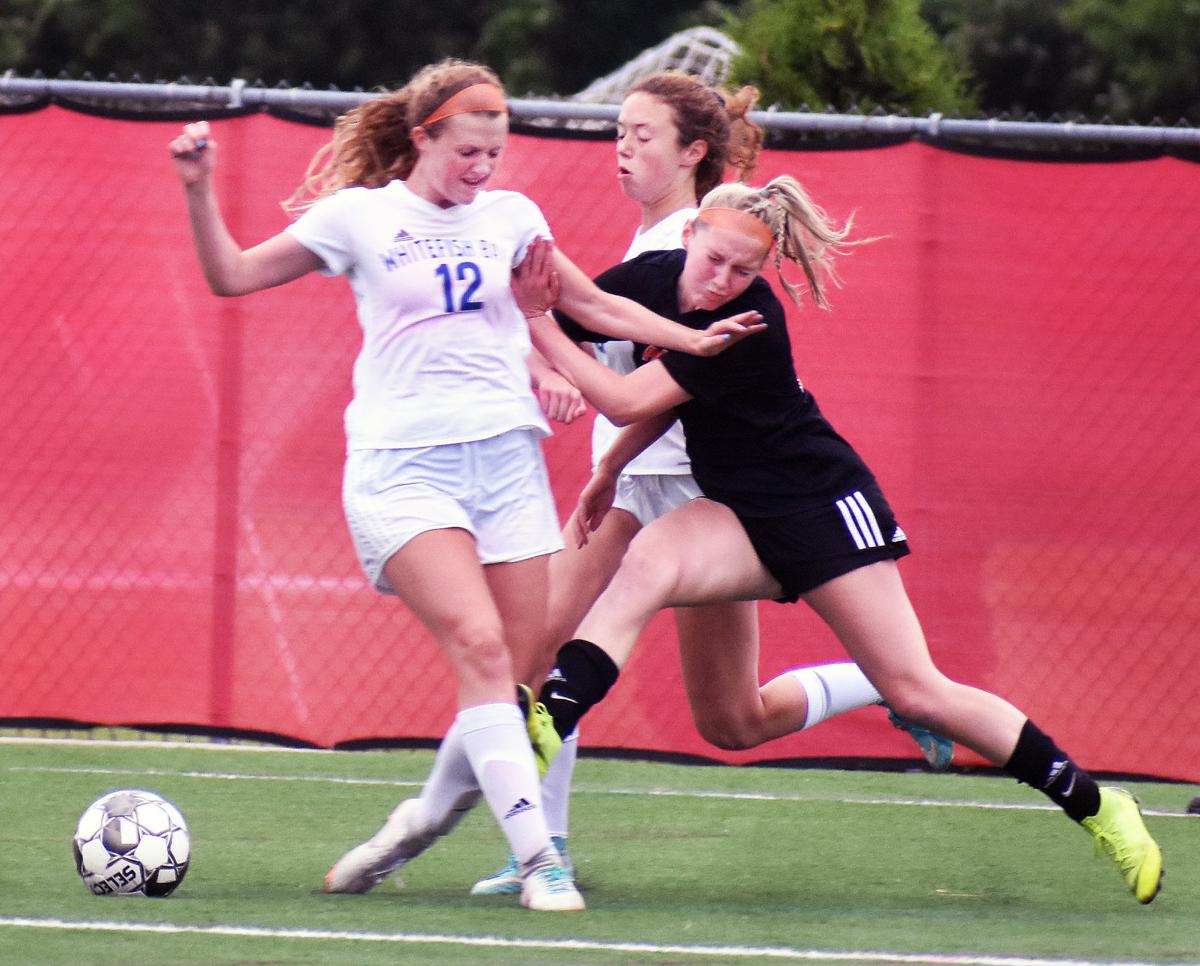 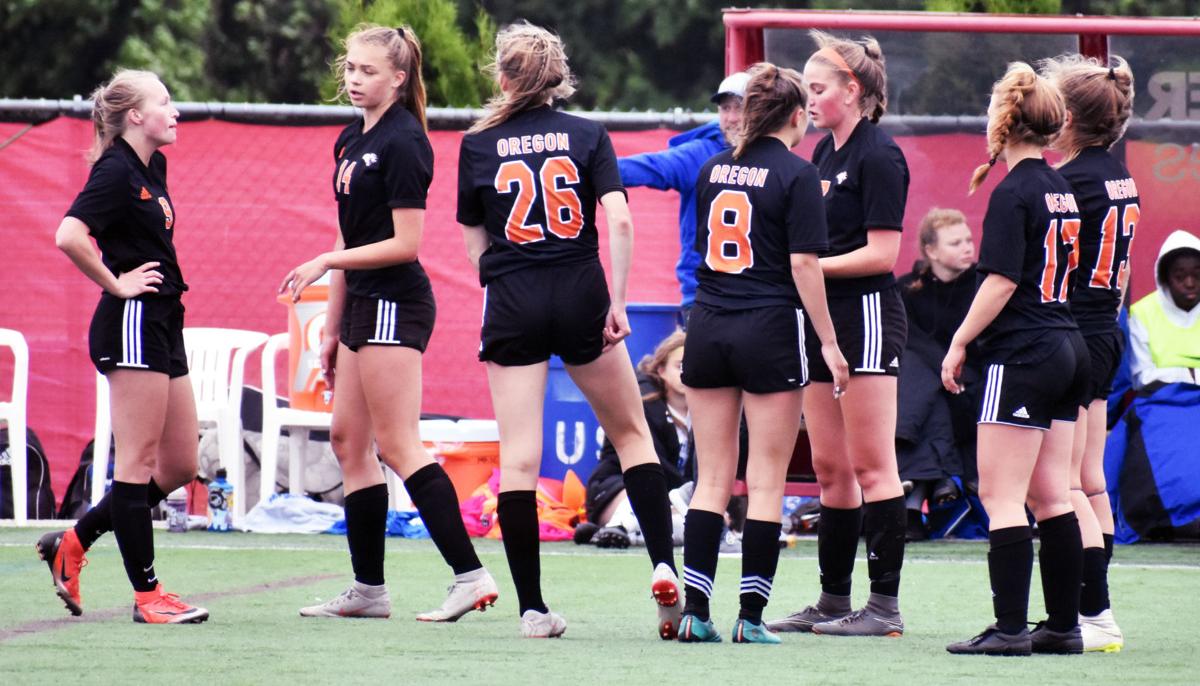 Oregon soccer players gather briefly during a second-half break in the action during the WIAA Division 2 state championship game against Whitefish Bay at Uihlein Soccer Park on Saturday.

MILWAUKEE — Melia Moyer admitted she was on edge Saturday with the Oregon girls soccer team’s title hopes hanging in the balance and all eyes focused on her.

An initial save in the shootout quickly changed the junior goalkeeper’s mindset, and moments later the Panthers were celebrating the second state championship in program history.

Oregon co-captain Katie Eisele punched in the shootout clincher after Moyer’s second save as the Panthers halted a two-game losing streak in state championship games (2016 and 2018). Their first title came in 2015.

Moyer, who was under enormous duress throughout the game — especially late in regulation and overtime — was feeling the pressure as the shootout commenced.

“Going into it, I was very nervous,” she said, “and when I got that first one (a diving stop to her left) it was very exciting and I gained a lot of confidence going into the next few.

“And when we won, it was just an amazing feeling. I just couldn’t be prouder of this team. We worked so hard to achieve this. It’s just amazing.”

Moyer withstood a Blue Dukes assault that included 24 shots and 14 corner kicks. She finished with 10 saves.

The pre-game chatter centered on the fact Whitefish Bay (24-1-1) was playing the first half short-handed because leading scorer Maggie Starker was at her sister’s wedding and two seniors were at graduation.

“I think it got into our heads a little bit at times,” Rohrer said. “We knew how good (Starker) was, and so we got back on our heels a little bit.”

Starker made her presence known early in the second half when she found teammate Belle Patzer with a short pass and Patzer converted in the 49th minute for a 1-0 lead.

But that’s when Oregon’s work on defense and set pieces paid off.

The Panthers earned a free kick from 25 yards out and they used a unique double feint, when two teammates passed in front of the ball from either side and then Rohrer came in at the last second to strike a perfect lofting shot that carried just over Blue Dukes goalkeeper Elana Deslongchamps in the 52nd minute.

“We knew we had to get that score back,” Rohrer said. “We work so much on those plays and the ball felt really good coming off my foot. That was such a morale booster.”

Coach Nelson Brownell was thrilled to see many hours of work in practices pay off.

“Set pieces are one of the few things you can really put together,” Brownell said. “We spend a lot of time on them and (the players) were actually complaining about that. But you never know how important they can be. We’ve actually scored several goals off of set pieces the last three weeks.”

Whitefish Bay, which was going into a strong north wind in the second half, sustained a lot of pressure — especially in this last 10 minutes and overtime. The Blue Dukes outshot the Panthers 10-0 in the two OT sessions.

In the shootout, Oregon received scores from Sydney McKee and Emma Halverson for a 2-1 lead and then Moyer made her big stop on Whitefish Bay senior Liz Murphy. Then after the Panthers’ Randey Lewis scored, Moyer made the biggest stop of her career on Starker.

And when Eisele made her shot, the Panthers (17-0-2) screamed together in joy.

“This team never gives up,” Brownell said. “We’ve dominated a lot of games and this was only the second game where we’ve been down all year, but for us to come back against the No. 1-ranked team is huge.

“We have a good team and they’ll be a good team again, but this team, this group of girls has had to deal with disappointment of coming in second twice (in the state final), so under this kind of pressure to come out with the gold ball is just huge.”

Brownell, who plans to move to Washington in July, finished his one-season tenure as Oregon coach undefeated and a state champion. The Panthers were grateful for his efforts.

“This is an amazing feeling,” Rohrer said. “We’ve been working hard over the years and this was just a game that we felt that we deserved. We really deserved and earned this.”

Only one year after replacing veteran coach Julie Grutzner, Panthers coach Nelson Brownell is leaving after this year's state tournament.

Oregon was the Division 2 runner-up last year; Waunakee enters with the No. 2 state ranking and top Division 1 seeding

Waunakee is ranked third overall and Oregon fourth in the rankings that include all divisions.

Area players dot the rosters for the boys and girls games.

Farnsworth and Rothwell were selected on the first team.

The games are scheduled for July 20 at UW-La Crosse.

The Crusaders were the state runners-up in WIAA Division 3 at the state girls soccer tournament.

Oregon soccer players gather briefly during a second-half break in the action during the WIAA Division 2 state championship game against Whitefish Bay at Uihlein Soccer Park on Saturday.