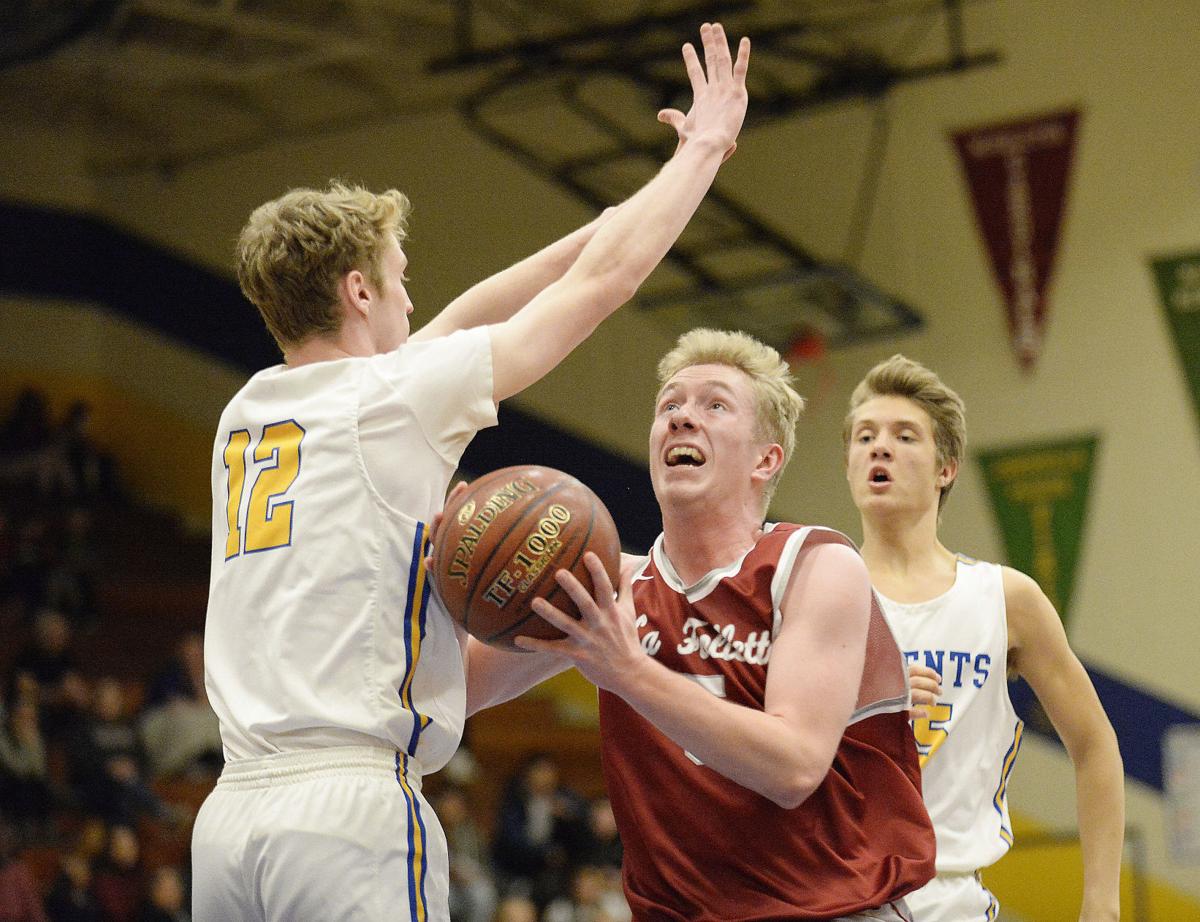 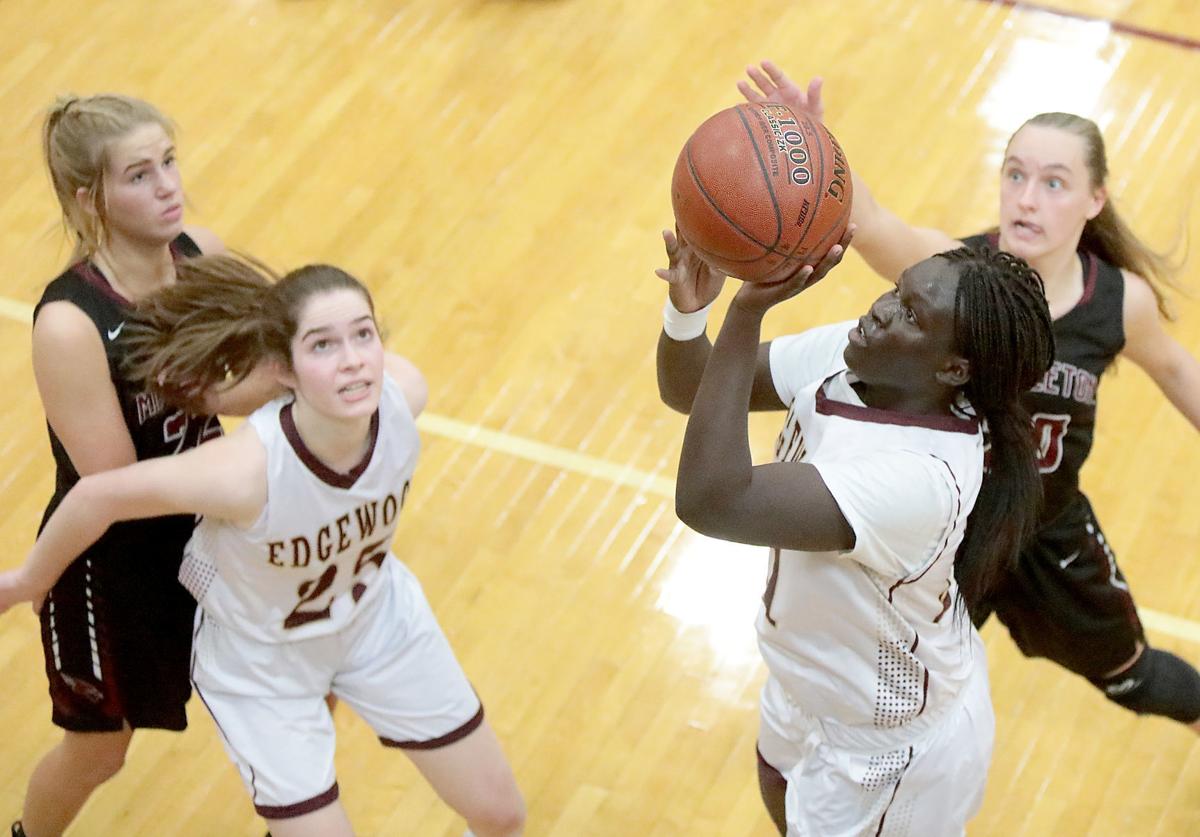 Madison Edgewood's Baluck Deang (21) shoots during the first half of a non-conference game against Middleton at Madison Edgewood High School in Madison, Wis. Saturday, Nov. 30, 2019. Also in on the play are Edgewood's Liz Cook (25) and Middleton's Evie Coleman (22) and Kendall Roquet (20). JOHN HART, STATE JOURNAL

The talk will center around Ben Probst and Baluck Deang, whose families both are members of the East Side church — and who both have entered elite territory in the world of Madison-area high school athletics.

Probst, a recent graduate of Madison La Follette, and Deang, who just finished a notable junior year at Madison Edgewood, are the Wisconsin State Journal All-Area Athletes of the Year for the 2019-2020 school year.

Each had accomplished seasons in two sports before the COVID-19 pandemic wiped out the spring sports season and cost Probst a chance to play baseball for the Lancers.

Probst earned second-team All-Area honors as the football team’s quarterback and a third-team All-Area spot in basketball, as the Lancers went 23-1 and were one game away from the WIAA Division 1 state tournament when the COVID-19 virus forced an abrupt cancellation of the tournament.

Deang started the school year by cruising to the WIAA Division 2 state tennis championship, going 33-2. She went on to earn first-team All-Badger South Conference honors and All-Area honorable mention with the Edgewood girls basketball team, which went 16-9 and lost to Platteville in a regional final after Deang suffered a season-ending ankle injury in the previous game.

It was more than just statistics and win-loss records that elevated Probst and Deang to the top of the all-area list, beating out a number of worthy athletes from the State Journal coverage area’s 45 high schools.

Intangibles — smarts, year-round dedication, teamwork and grit under pressure — all were abundant in both young athletes.

The 6-foot-1 Probst quarterbacked the La Follette football team to a 6-4 record, completing 59.5% of his passes for 1,765 yards and 23 touchdowns with 10 interceptions. He also ran for 126 yards and a score.

“There was always that mutual belief — us in him, and him in his teammates — that Ben was always going to get it done,” La Follette football coach Scott Swanson said. “Our guys really respected him and followed his lead. The total confidence that he had in himself and his team, it’s an everyday type of thing for him.”

The Lancers’ season came to an end in the first round of the WIAA playoffs. Probst led the Lancers on a 97-yard, last-minute drive for a touchdown against Middleton — but La Follette’s attempt at a two-point conversion failed, giving Middleton a 21-20 win.

It was Probst’s only complete year playing quarterback, as he suffered a broken collarbone six games into his sophomore year and shared the starting role with West transfer Ray Broughton as a junior. Probst still threw for 1,064 yards as a junior and 3,140 yards in his prep career.

And then came basketball season, where Probst and his teammates reached the brink of a magical season before the coronavirus brought things to an abrupt end a day before a highly anticipated sectional-final showdown with Madison East.

The Lancers split two regular-season meetings with East and held the No. 1 state ranking at multiple points during the season. Probst led La Follette in scoring at 15.3 points per game, and added 5.0 rebounds and 1.5 assists. A four-year varsity regular, Probst totaled 1,016 career points.

One of Probst’s basketball teammates, Isaiah Stewart, went on to earn All-Area Player of the Year honors from the State Journal. Probst celebrated that fact, rather than sulking that he wasn’t the most-noticed player in the lineup.

“That was one of the best parts of the year, having guys like Isaiah and Dakovin (Prather) that we knew we could count on,” Probst said. “Competing in athletics, you put all that other stuff aside and make it a team. We understood our strengths, and which person was the best to do what needed to be done.”

“Many kids would be like, ‘I can’t do that, I’m out of here,’” Lancers basketball coach Curtrel Robinson said. “His role evolved as his career went on. Each year, he was able to hit a little bit more. He does so many things well.”

Said Swanson: “He never needed to be ‘the man.’ He was going to work hard in order to win, and it didn’t ever matter who got the credit.”

“He’s a unique kid, but he’s also an everyday guy,” Robinson said. “He takes the ‘coach on the floor’ idea to the next level.”

Probst also was looking forward to baseball season, where he expected to play a prominent role as a pitcher and first baseman. Outside of sports, he is a 4.0 student who never received a grade of B in high school, despite taking honors and Advanced Placement classes, served in the National Honor Society and took part in Badger Boys State.

Probst will attend UW-Platteville to play basketball. “No football, nope,” Probst said with a laugh. “My football playing days are over.”

Baluck Deang was a little girl when she decided that tennis would be her favorite sport — after an interaction with a stranger.

“I was playing tennis outside with my mom and my siblings, and this lady came past,” Deang recalled. “And she stopped and said, ‘I’ve never seen that many African-Americans out playing tennis.’ And she said we should all keep playing, so that we could inspire others to take up the sport.

“And I thought, ‘You’re right.’ And I’ve been trying to do that ever since.”

Deang, blessed with a powerful 6-foot, 1-inch frame, is a hard-charging force on the court. A left-hander, her sizzling groundstrokes and serve can be intimidating, and her knowledge of some of the secrets of success — when to go hard and when to use finesse — continues to grow with experience.

Deang said she loves tennis because “when a mistake happens, you can’t blame anybody but yourself. It’s all about mental toughness.”

That toughness paid off when she trailed top-seeded Sarah Gesner of Racine Prairie 2-1 in the decisive third set of the state final. Deang rallied to win five consecutive games to earn a 6-3, 6-7 (5), 6-4 victory. It was only her fifth three-set match in 35 matches last season.

Her only losses came in a regular-season tournament against WIAA Division 1 runner-up Zaya Iderzul of Lake Geneva Badger and third-place finisher Natalie Yang of Mequon Homestead.

Year-round, Deang spends 12 to 20 hours a week actively working on her game. Even during basketball season, she’d often wrap up practice at Edgewood and go to work on her tennis game.

Deang averaged 8.8 points, seven rebounds and two assists per game for the Edgewood basketball team, which finished third in the Badger South. Girls basketball coach Lora Staveness said she thought the Crusaders appeared ready to make a postseason run, but Deang injured her ankle early in a Division 3 regional semifinal against Dodgeville and couldn’t play in a regional final loss to Platteville.

“With Baluck in there healthy, who knows what could have happened? I really think we could have run the table,” Staveness said. “She’s so motivated to put in the work, to get better. And she really values being part of a team.”

Deang says her work ethic comes from her remarkable family. She has four brothers and two sisters, and her mother, Willma Joshua, and father, Joseph Deang, emigrated from war-torn Sudan in 1997.

“My parents work their butts off for me to make it somewhere,” Deang said. “I think of them as my motivation, because they work so hard. I see that in my siblings, too. They’re always working hard, so I should, too.”

Deang has her sights set on earning a college scholarship in tennis. “I don’t want my parents to pay for college,” she said. She’d like to study to become an attorney — but she has other long-term goals, too.

For now, Deang gives introductory lessons to youngsters at Cherokee Country Club while working on her own game. As a senior, her two main goals are to win the team state tennis championship and the state basketball championship. “And if I could, maybe individual state again, too,” she said.

The 6-foot-1 Probst, a first-team all-Big Eight Conference selection, helped lead the Lancers to the league title. He plans to attend UW-Platteville.

The Lancers led 45-22 at the half, and their advantage hovered in double digits the rest of the way.

The Purgolders, ranked No. 1 at the close of the regular season, hope to make a postseason run after falling in a regional final last year

The victory allows the Lancers to take over second place in the Big Eight Conference.

Defending champion Monona Grove returns a large crew, but must make up for the loss of state player of the year McKenna Warnock

After leading Madison West to the Division 1 state team tournament semifinals, Ryan Reischel is named Coach of the Year

Led by sisters Cecile and Samantha Fuchs, DeForest remains formidable in the Badger North. Monona Grove, Watertown and Madison Edgewood figure to battle it out in the Badger South.

Illinois-Springfield commit Uhl is the player of the year in the Badger South Conference.

No area teams were ranked. Many aren't playing this fall and plan to play in the alternative spring season.

DeForest senior Samantha Fuchs, the fourth-seeded player, moves on in singles with a straight-set victory in Division 1 competition in Lake Geneva. 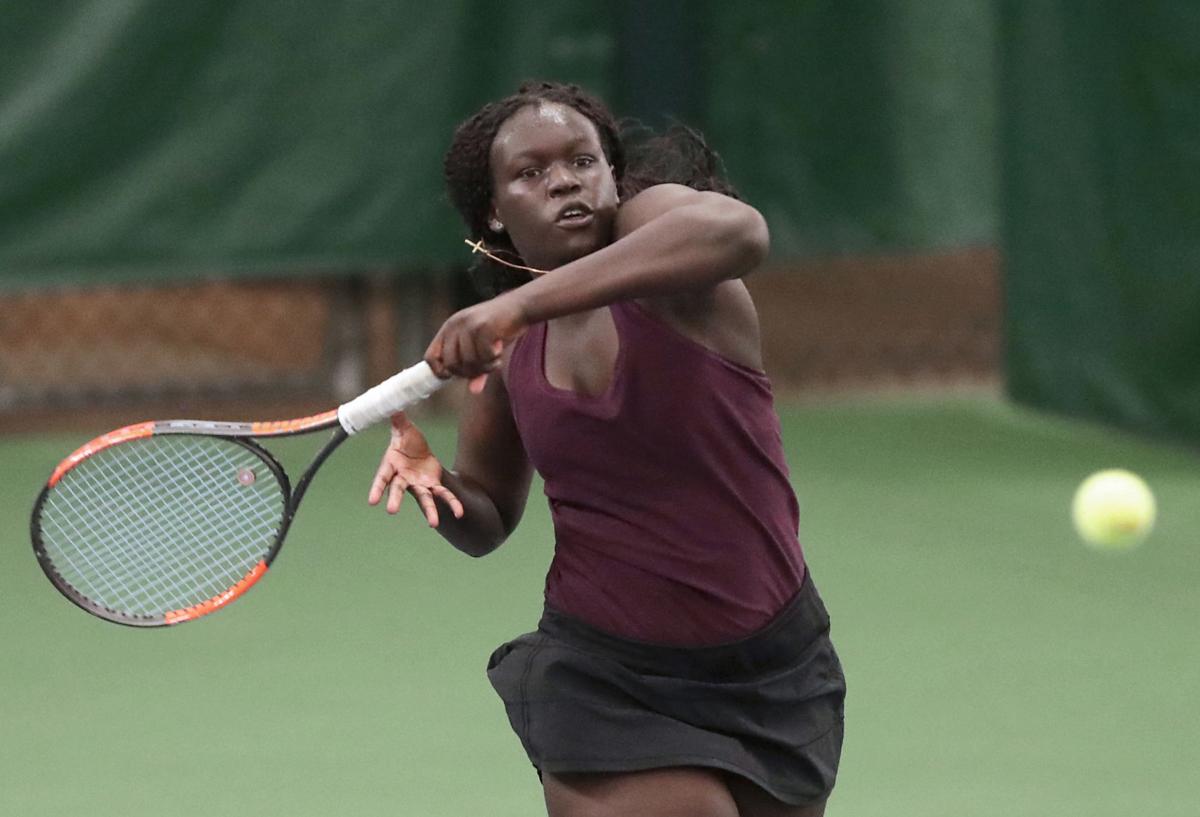 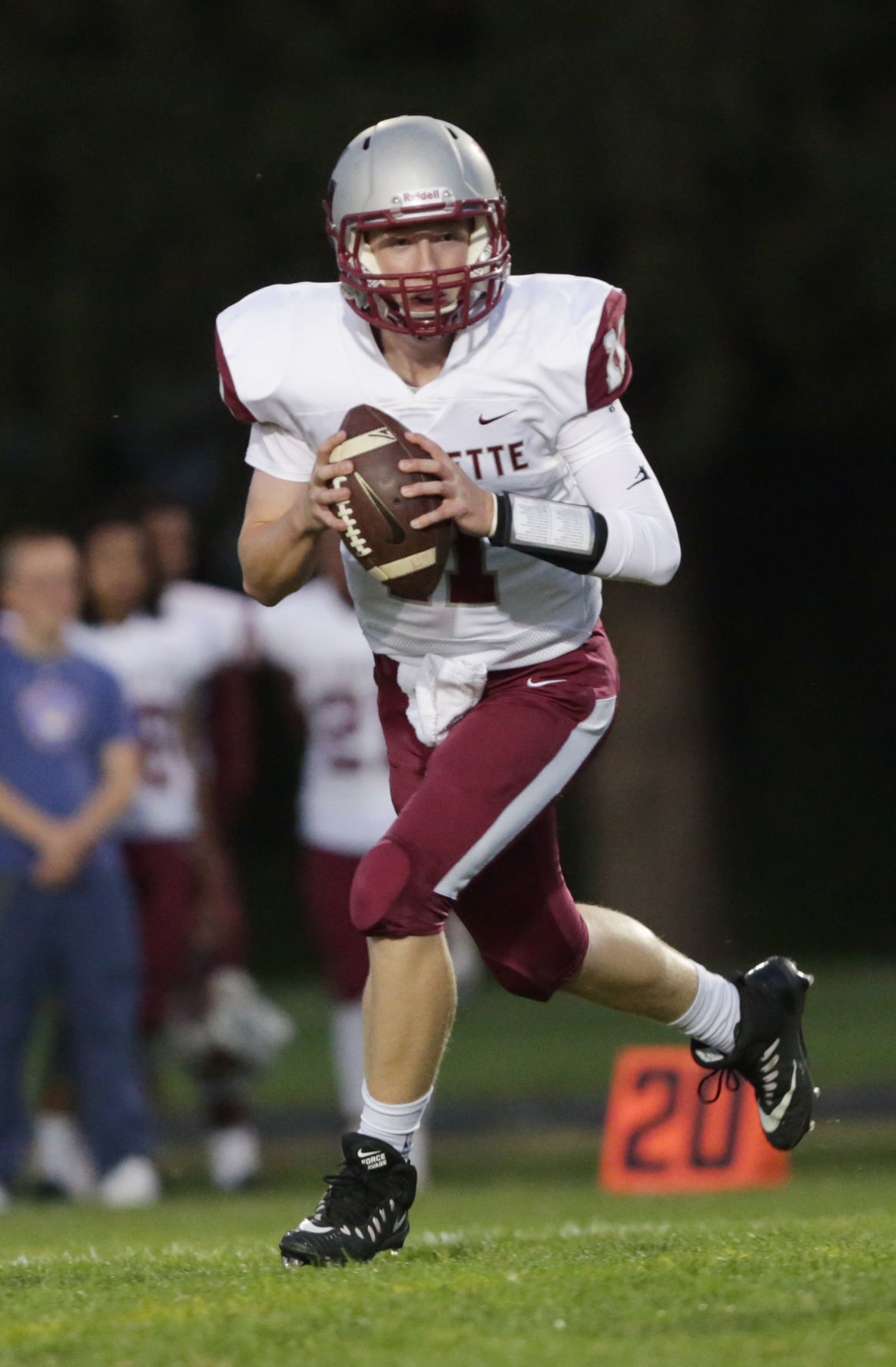 Madison Edgewood's Baluck Deang (21) shoots during the first half of a non-conference game against Middleton at Madison Edgewood High School in Madison, Wis. Saturday, Nov. 30, 2019. Also in on the play are Edgewood's Liz Cook (25) and Middleton's Evie Coleman (22) and Kendall Roquet (20). JOHN HART, STATE JOURNAL