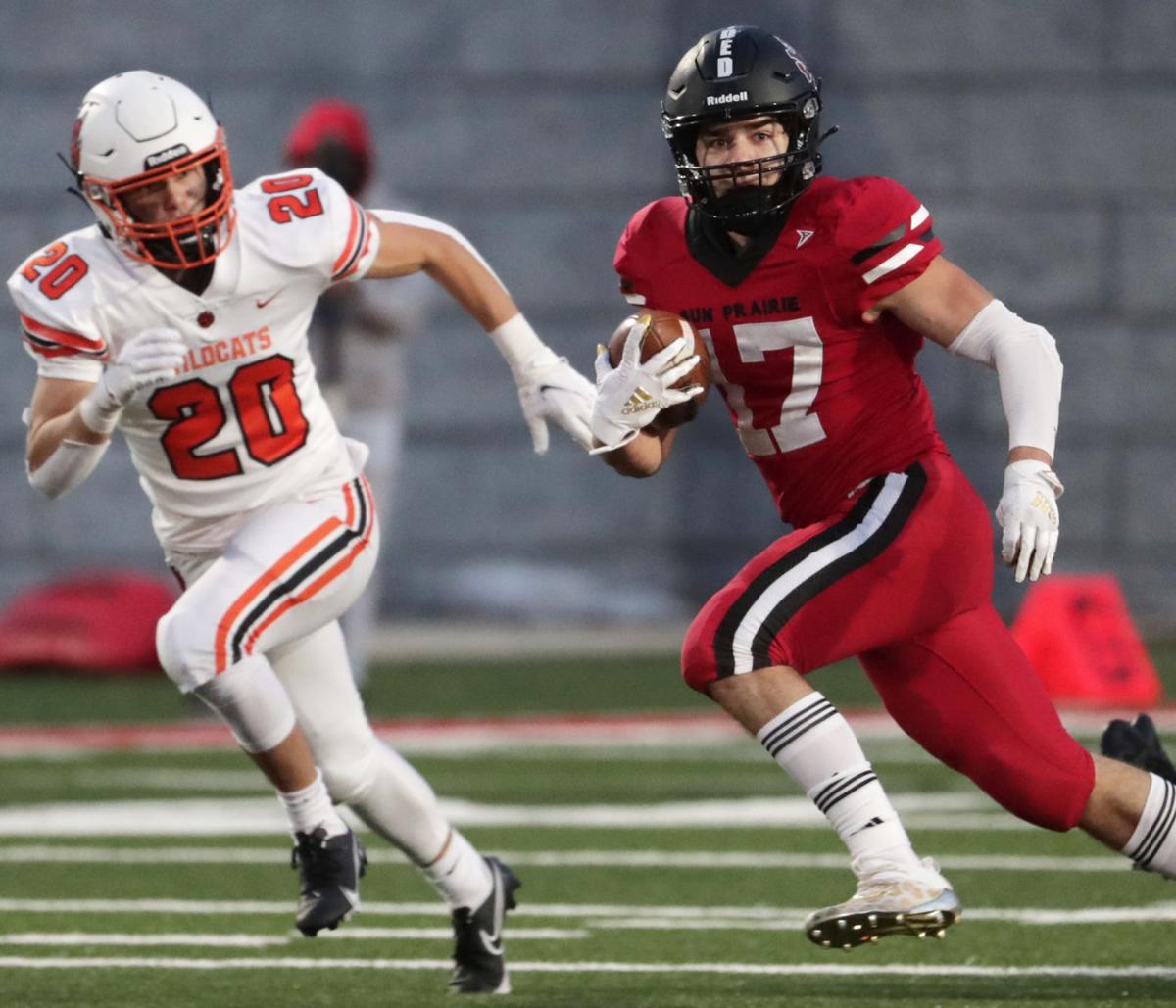 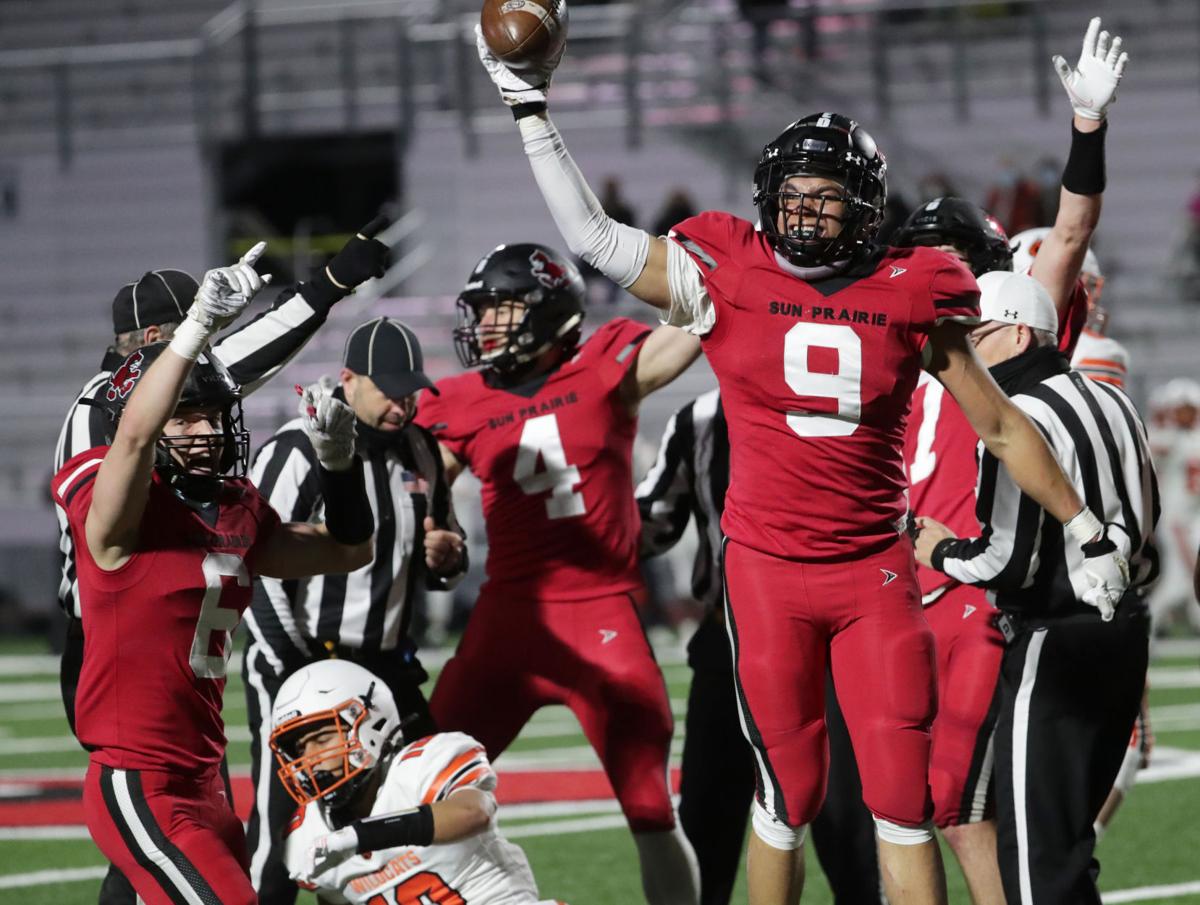 Sun Prairie's Austin Knade celebrates his fumble recovery in the first half at the new Bank of Sun Prairie Stadium at Ashley Field.

SUN PRAIRIE — On the first Friday night of the unprecedented alternate fall football season in the spring, Sun Prairie christened its brand-new football facility with a sterling performance by its defense.

Sun Prairie scored two touchdowns within 44 seconds in the second quarter and relied on a fearsome defensive front in blanking Verona 17-0 in the first football game at the Bank of Sun Prairie Stadium at Ashley Field.

“Our defense was unbelievable tonight,” Sun Prairie coach Brian Kaminski said. “It starts upfront. Our four dudes upfront were dudes tonight. They played well. Our back end played well. We pursued to the football. We gang-tackled. We held in check a great running back tonight.”

“Their front six players are pretty good,” Verona coach Dave Richardson said. “We were outmatched there and it’s tough to get things rolling when there is a lot of penetration. Our kids are getting better, and they got better toward the middle and the end. But that’s a good defense. Those are kids that are flying around and having fun. We know where we stand right now and we are going to get better.”

Madison area teams that didn’t play in the fall due to the COVID-19 pandemic are now able to compete in a seven-week window permitted by the WIAA.

Four teams from the Big Eight Conference’s WIAA football league — Verona, Sun Prairie, Middleton and Beloit Memorial — are playing, while the four Madison public schools are not playing as their respective school teams (a club team with players from those schools has been formed). The games are non-conference games and no Big Eight champion will be crowned.

“It can always be better, but I’ll take the outcome,” said Kaminski, whose team last played in fall of 2019. “We know they are a good football team. It’s been a long time coming, man. … Obviously, we have a lot to clean up. But we played with energy and we played with a passion. … I thought our kids really rose to the challenge tonight.”

Sun Prairie scored first on a 2-yard touchdown on “a fly pass” (a short forward toss) from sophomore quarterback Jerry Kaminski to junior receiver Michael McMillan, who swept around the right end for the touchdown with 3 minutes, 55 seconds left in the second quarter.

The Cardinals gained possession in Wildcats’ territory after Acker fumbled returning the ensuing kickoff. Sun Prairie senior Mekhi Gullens was credited with forcing the fumble and Knade with the recovery at the Verona 22 with 3:45 remaining.

“They both played well,” Brian Kaminski said of his two quarterbacks. “For the first game, they did excellent. Brady had a heck of a throw on the touchdown to Gothard. Jerry (the coach’s son) managed things well and threw some good balls. They just have to realize that together they can be great.”

Fink’s 26-yard completion to Stier gave the Wildcats a scoring chance at the Sun Prairie 18-yard line with 47 seconds left in the first half. But the Sun Prairie defense stiffened and kept Verona off the scoreboard.

Stier rushed for 40 yards and Acker had 18 on seven carries, but multiple tackles for loss by the Sun Prairie defense when getting to Fink led to the minimal rushing total for the Wildcats. Sophomore Kolten Walters gained 80 yards on the ground for Sun Prairie.

The alternate season for girls swimming and diving will have its state championship meet April 6 at Waukesha South, beginning a series of tournaments in various sports this spring.

Iverson, who coached two years at Sauk Prairie, was hired in 2019 and led the Eagles to a 6-4 record and a postseason berth in his first season.

Schools that elected against playing football this past fall amid the COVID-19 pandemic are receiving an opportunity this spring. The four Madison public schools, however, aren't scheduled to have WIAA in-person competitions in football.

Henry Walsh beat double coverage to catch a 36-yard pass from Casey Marron in the back of the end zone with 1 second left Saturday afternoon, giving Monona Grove a 13-7 victory over Oregon in a season-opening football game at DeForest.

White endured a year-long treatment for lymphoma, which now is in remission. He has inspired others through his resiliency and dedication to excellence for the Cardinals' students and staff.

The senior rushes for a career-best 206 yards on 16 carries and scores a career-high four rushing touchdowns.

Milton controls line of scrimmage in rout of Mount Horeb/Barneveld

Also this week, Oregon plays at DeForest and Monona Grove goes to Stoughton

Sun Prairie's Austin Knade celebrates his fumble recovery in the first half at the new Bank of Sun Prairie Stadium at Ashley Field.