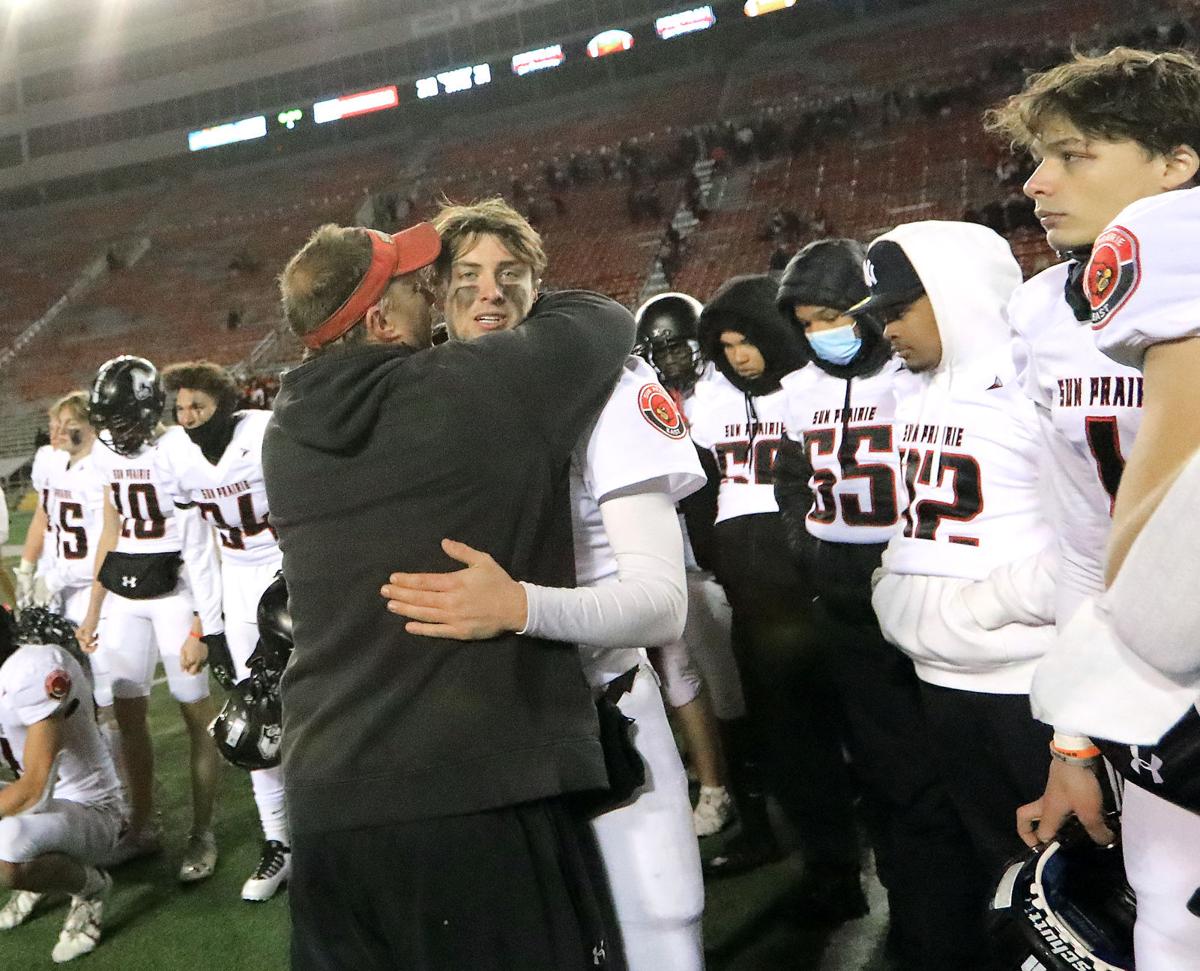 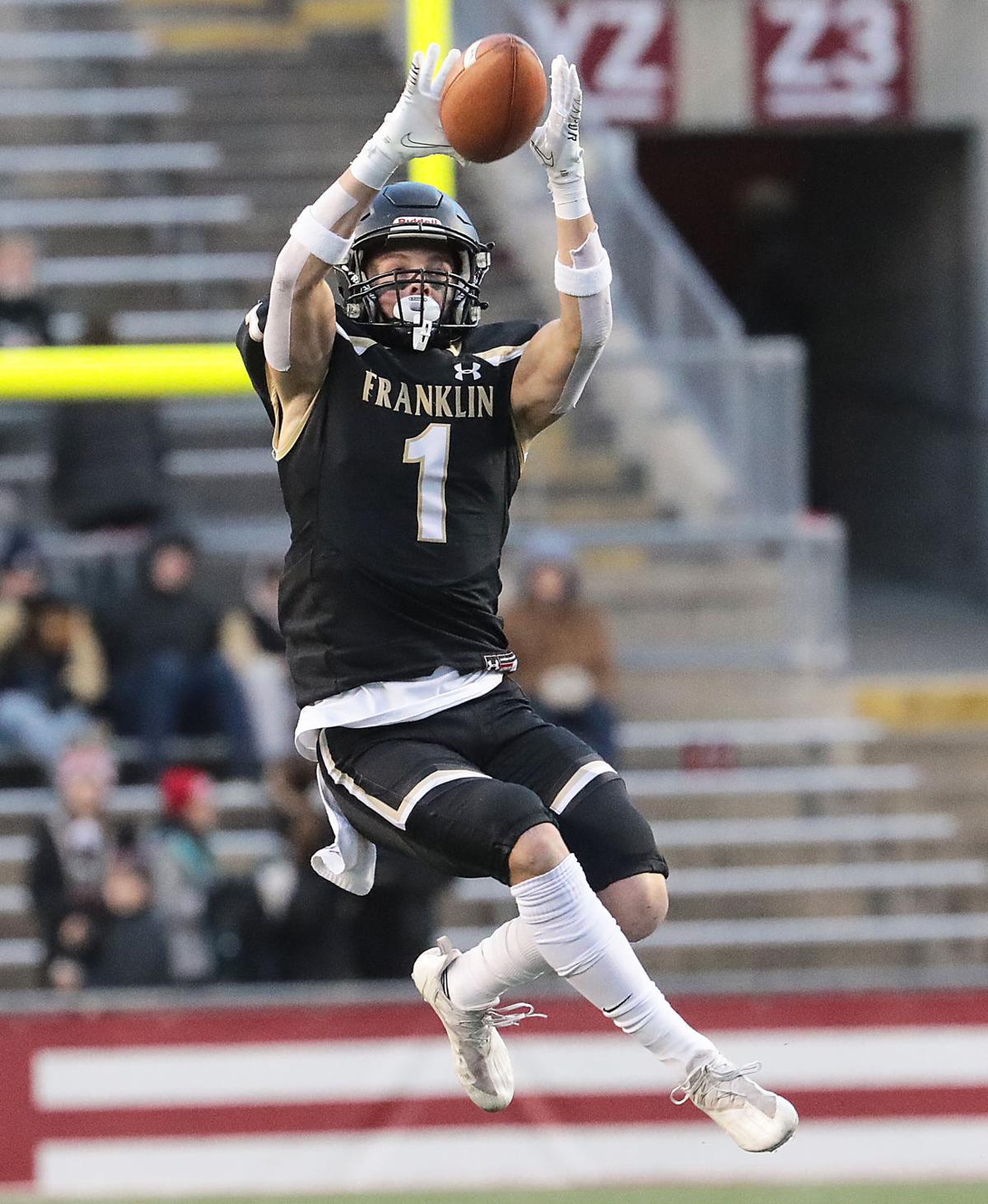 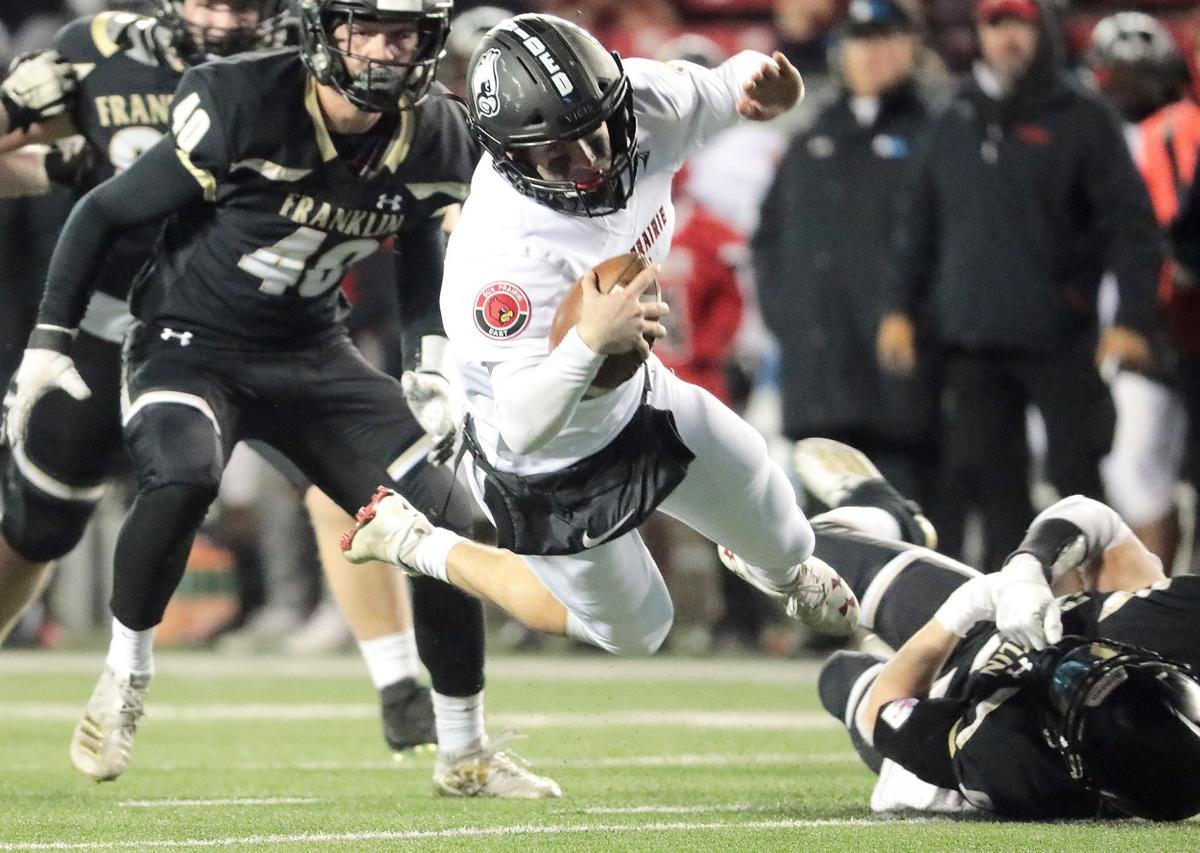 Sun Prairie quarterback Jerry Kaminski is tripped up for a loss by Franklin's Cooper Kamlay during the second half.

The Cardinals needed a jumpstart.

And they got it from defensive back Michael McMillan and a pair of his pals on the other side of the ball.

“That was awesome,” Kaminski said. “You could really feel the momentum in the stadium shift. It felt like we were going to go and finish this game out.”

Unfortunately for the Cardinals, their rally was stiff-armed one score short of tying the game and Franklin went on to 38-17 victory thanks in big part to a record-book performance by wide receiver Reese Osgood.

It’s the final game for Sun Prairie’s football program before the school district splits into two high schools before the 2022-23 school year.

Sun Prairie piggy-backed Hamilton’s touchdown catch by forcing a three-and-out and getting the ball back at midfield, turning that good field position into a six-play scoring drive capped off by Kaminski’s 4-yard touchdown run off the right side on a read option, making it 24-17 with 1 minute, 58 seconds to go in the third quarter.

After getting another stop on Franklin’s (14-0) ensuing possession and starting at their own 22-yard line, the Cardinals (13-1) missed on a deep shot on second-and-6 and couldn’t move the chains on third down. They punted back to the Sabers, who marched down the field in a hurry to take a 31-17 lead on Burkett’s 30-yard touchdown pass to a wide-open Osgood in the back of the end zone.

1 Badgers recruit, 2 targets descend on Camp Randall Stadium for WIAA football championships. What the competition has to say about them

“We tried a deep shot and we missed it, and we couldn’t get a first down and then they were able to score again. It’s tough to come back from that,” Sun Prairie coach Brian Kaminski said. “But our kids showed the character of a champion by being down 24-3 and coming back to make it a one-score game. I’m very proud of that.”

Osgood’s 30-yard touchdown grab was his last catch of the night, giving him five for 169 yards — four yards short of the single-game Division 1 record of 173 set by Arrowhead’s Justin Peret in 2015.

The most receiving yards in a game in any other division is 164, so Osgood’s mark is second-most across all divisions.

But he’s second to none as far as the Division 1 single-game record for longest TD catch, racing for an 88-yard score to give the Sabers a 10-3 lead with 33 seconds to go in the first quarter after coming wide open at Franklin’s 45-yard line on a play-action pass.

“He runs a 4.5 (40-yard dash). Great athlete,” Franklin coach Louis Brown said of the 6-foot-1, 183-pound senior. “I think he’s severely under-recruited — I think he could play in a very big setting. He’s got a lot of offers, but I think he’s a big-time receiver.”

Sun Prairie held its own after giving up the 88-yard score, forcing a turnover on downs on a Franklin drive that started in Cardinals territory and then getting an interception from Sam Ostrenga in the red zone to turn away another promising opportunity for the Sabers.

But senior running back Tanner Rivard’s 46-yard run later in the quarter set up a 6-yard TD run by sophomore running back Terrance Shelton to the left pilon, giving Franklin a 17-3 lead it would take into halftime.

Despite being down by two touchdowns at the break, it was a good effort by the Cardinals defense in the first half, forcing a pair of turnovers plus the turnover on downs to keep things from getting out of hand.

“They played awesome,” Jerry Kaminski said, not just of the first half but of the game as a whole. “They gave us as many chances as we needed, the offense just couldn’t capitalize.”

The numbers didn’t get much better in the second half as the Cardinals’ two scoring drives were of 37 yards and 50 yards. They didn’t do much of anything outside of that.

Despite the stats, Sun Prairie’s defense was good in some critical moments, too, helping keep the Cardinals’ comeback hopes alive into the fourth quarter.

“We just gave up too many big plays for us to be able to win this football game,” Brian Kaminski said.

And the offense wasn’t able to make up the difference.

“Our game-plan was just to do what we’ve been doing. Run the ball, take what they give us short and then hit our shots later,” Jerry Kaminski said. “We just couldn’t get the run game started, and I was making bad decisions. It was all of us, it wasn’t just one person. But we knew there were going to be some hiccups, and I’m proud of the team on how we bounced back.”

“I’m proud of this team, we battled — we really did. We fought until the very end.”

Sun Prairie quarterback Jerry Kaminski is tripped up for a loss by Franklin's Cooper Kamlay during the second half.