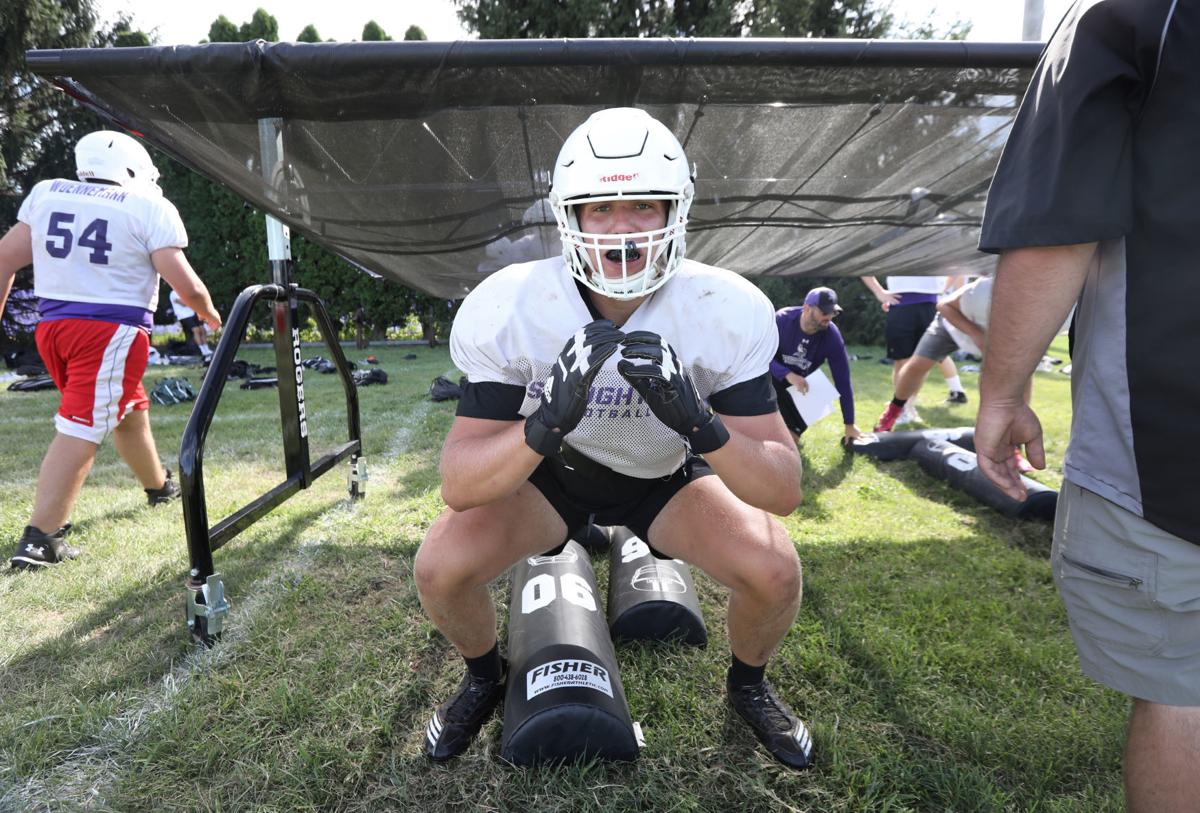 Stoughton's Jack Nelson goes through an exercise during the first week of football practice at Stoughton High School. 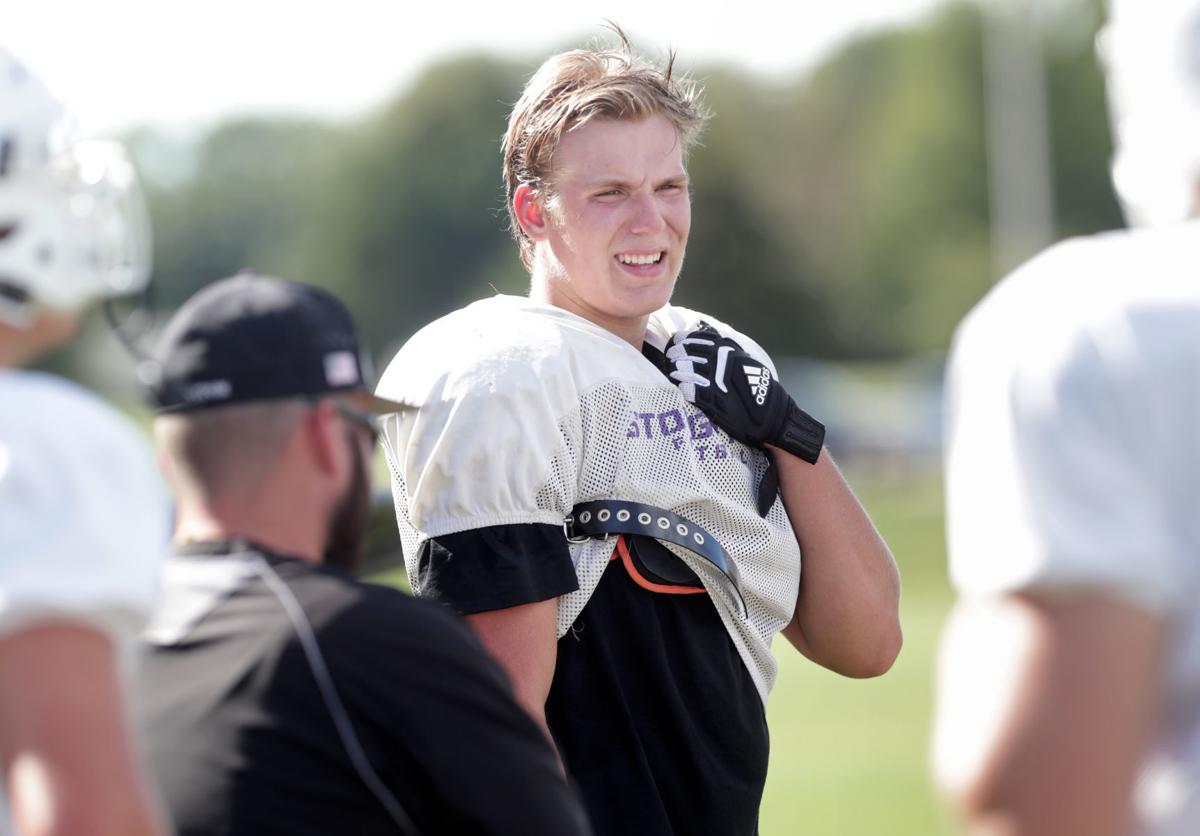 Stoughton's Jack Nelson listens to direction from his coach during an afternoon football practice at Stoughton High School during the first week of practice. 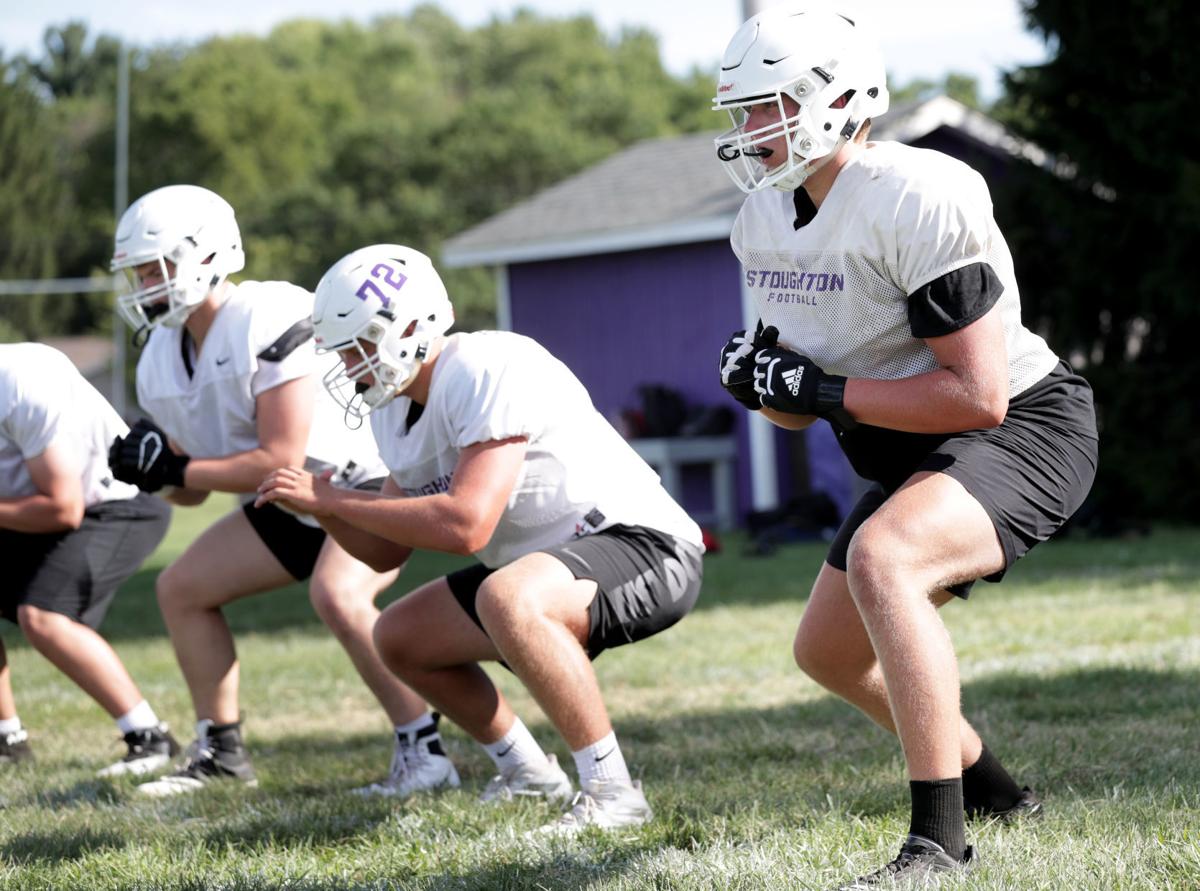 His father, Todd, had been an offensive lineman for the University of Wisconsin football team. That was a consideration, but not the primary determination in Jack Nelson’s thinking.

That was all Nelson needed to see.

“I think if my dad wouldn’t have played (for the Badgers), I still would have gone to UW,” Nelson said. “They create some awesome offensive linemen there, and it is close to home. It was a no-brainer. If you are an offensive lineman and from Wisconsin, it’s a done deal.”

Jack Nelson, who has started at offensive tackle for Stoughton since his freshman year, has grown from a 6-foot-1, 230-pound freshman to a 6-7, 280-pound senior who’s been the Badger South Conference offensive lineman of the year for the past two years (sharing the honor as a sophomore).

“Obviously, I’ve put on some good size,” said Nelson, who orally committed to UW as a sophomore. “I got taller, heavier, stronger, but kept my footwork. You know, staying pretty fast for my size, if not gotten faster. My technique has improved, obviously, just getting older and just with more experience, too. Three years of starting really gave me a lot of experience.”

Nelson has played left tackle throughout his prep career, and that’s where he’s scheduled to line up when Stoughton opens the regular season in a Badger Conference crossover game Friday night at Beaver Dam.

Stoughton football coach Dan Prahl has known the current seniors, including Nelson and quarterback Adam Hobson, since they were seventh-graders and he started teaching math in the school district.

He has watched Nelson grow bigger and stronger and develop his technique. Prahl is impressed by Nelson’s work ethic and his love for staying in shape and lifting weights.

“He still has to keep perfecting (his technique), and he knows it,” Prahl said. “He’d be the first one to tell you. He’s come along great. It’s been fun to watch. I can’t believe it’s been four years already.”

Nelson — also expected to again see time on the defensive line, possibly at nose guard, for the Vikings — cannot believe it, either.

Nelson said he hopes the Vikings can challenge for the Badger South Conference crown and make a deeper run in postseason than past years. Personally, he hopes to continue gaining weight, getting faster and stronger and perfecting his technique.

“Just overall, I really want to take football as far as it will take me,” he said.

Prahl said he has a young, energetic and hungry team, which will be led by Nelson, Hobson, Quinn Arnott, Brooks Empey, Owen Chase and Nathan Hutcherson. Sophomore defensive end Barrett Nelson could line up next to his older brother Jack along the defensive line.

“They are all buying in — buying into the team first,” Prahl said. “That’s what we are focused on now: Put the individual needs on the back burner, and let’s do what is best for the team.”

Despite playing left offensive tackle in high school, Nelson believes he could play any position along the offensive line on Saturdays.

“He’s been left tackle all four years for us, but he could handle right,” Prahl said. “At Wisconsin, all of their linemen are huge, even at center. He’s athletic enough that he could play center. With his levers, he is better suited for a tackle than a guard.

“But he is an O-lineman. He loves playing football. He wants to be a Badger. He didn’t get all hyped on the recruiting stuff. … He moved pretty quick.”

But Nelson didn’t need to wait to visit other campuses. He knew what he wanted to do and announced he had accepted UW’s offer in October, 2017.

Nelson said he plans to play prep football this fall, graduate after the semester and enroll early at UW, in January. He has played basketball at Stoughton, but won’t during his senior year.

Prahl believes Nelson, who anticipates studying business in college, will be an outstanding college player.

“He has worked this hard for it so far,” Prahl said. “He’s not going to let up. I’m excited to watch him.”

DeForest appears to have one of its strongest teams in years, and Mount Horeb/Barneveld is preparing to make a run at the top.

Led by sisters Cecile and Samantha Fuchs, DeForest remains formidable in the Badger North. Monona Grove, Watertown and Madison Edgewood figure to battle it out in the Badger South.

Baraboo, Cambridge, Fort Atkinson, Middleton, Stoughton and Watertown are among 27 schools honored. Baraboo and Stoughton are recognized for the third time.

The event hosted by Madison Edgewood at Maple Bluff Country Club has raised more than $97,000.

Stoughton's Jack Nelson goes through an exercise during the first week of football practice at Stoughton High School.

Stoughton's Jack Nelson listens to direction from his coach during an afternoon football practice at Stoughton High School during the first week of practice.