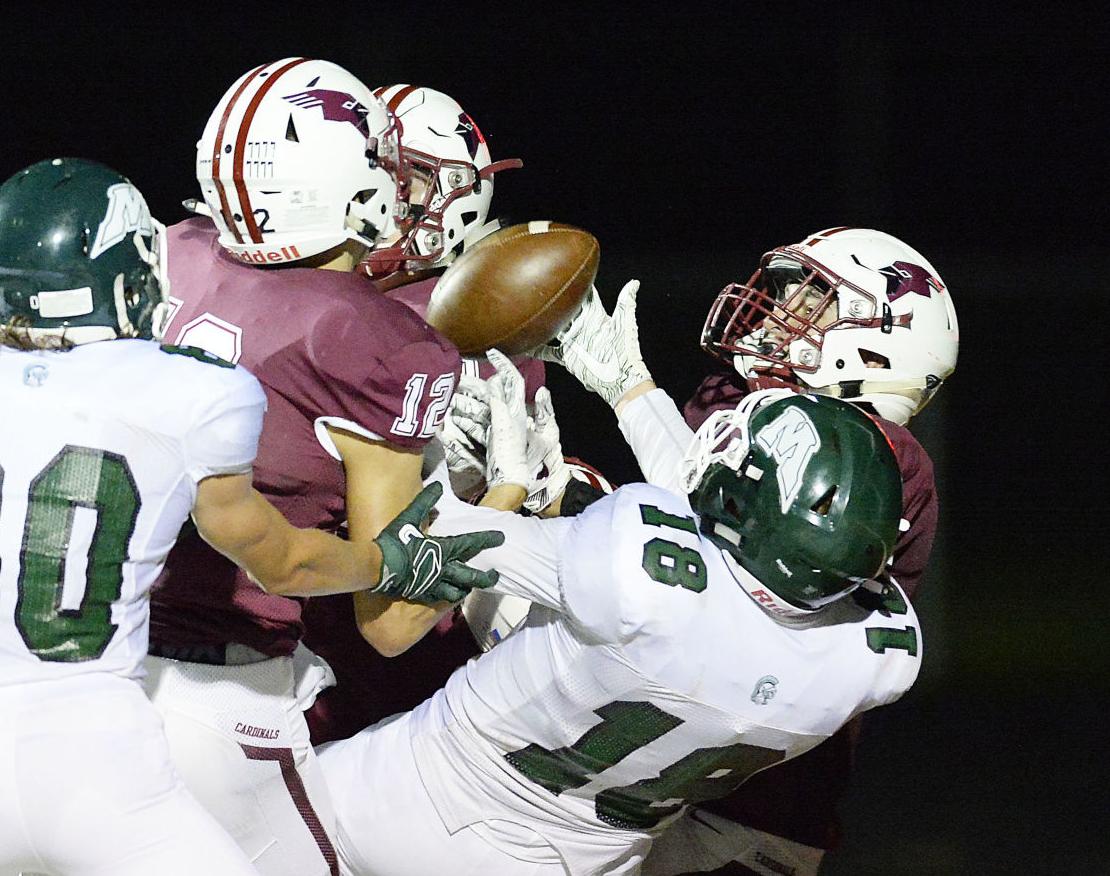 Madison Memorial's Dryden Schaefer (18) comes up with the winning reception on the final play of the game against Middleton. Schaefer had two touchdowns in the game. 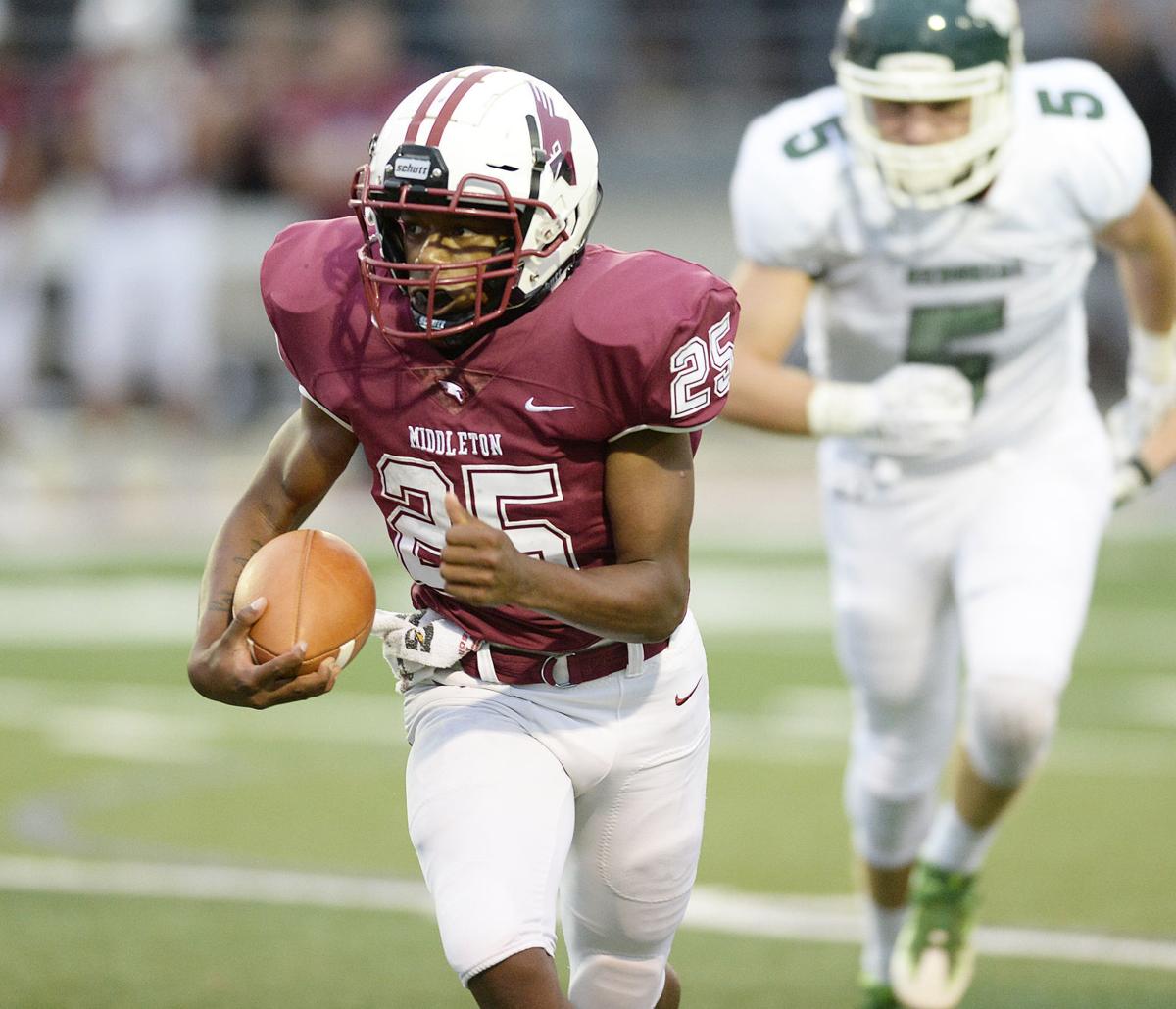 Middleton's Kallion Buckner runs for yardage as Madison Memorial's Will Sprout gives chase in the first quarter. Buckner had a 4-yard touchdown run in the second quarter. 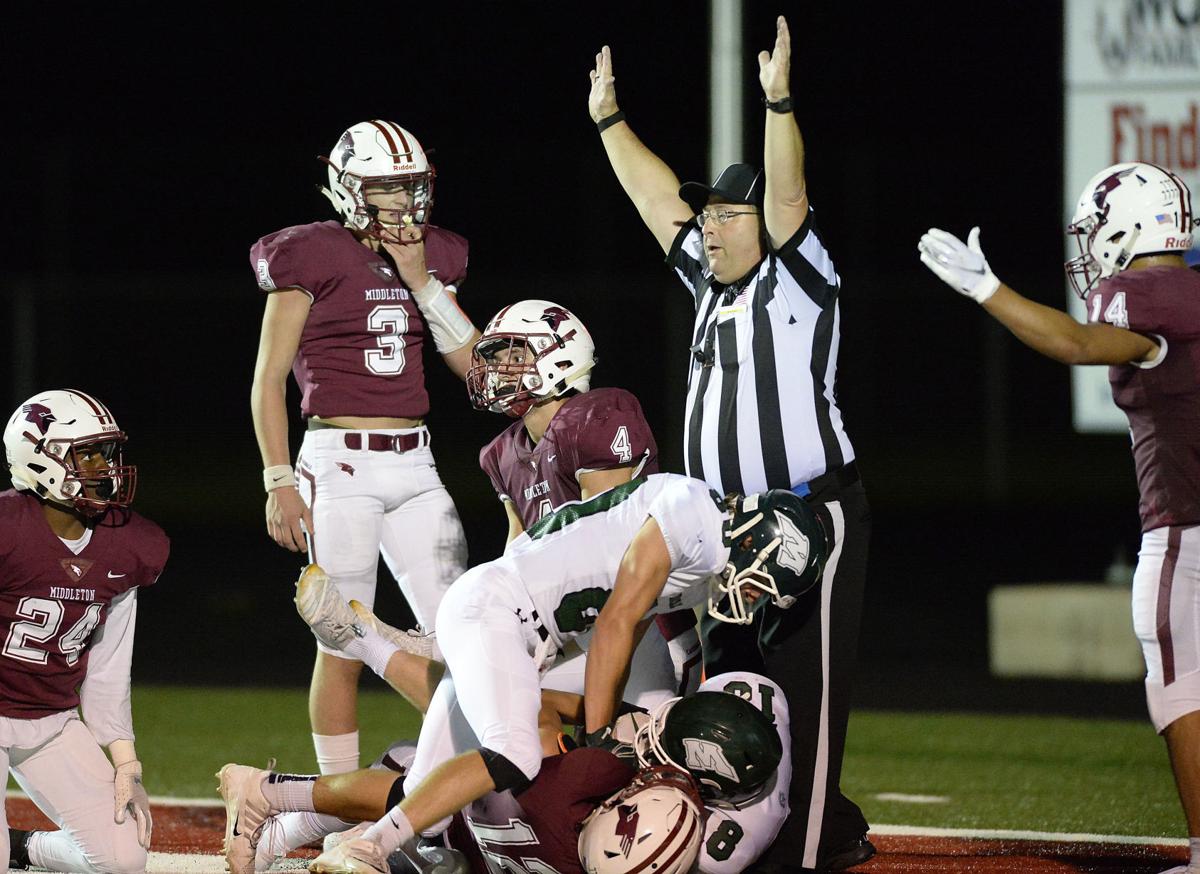 Memorial trailed Middleton by three points and faced a third-and-10 situation — 27 yards from the end zone.

Spartans junior quarterback Jason Ceniti and senior fullback/tight end Dryden Schaefer changed Schaefer’s assignment from a crossing pattern to a seam route. Schaefer told his quarterback that if Ceniti put the ball up, Schaefer would bring it down.

Ceniti, hobbled by a sprained ankle, rolled out and let the football fly. And, sure enough, amid a pack of players in the end zone, the 6-foot-3, 210-pound Schaefer somehow grabbed the “Hail Mary” pass and held on while tumbling to the ground as time expired.

The Spartans pulled out a 30-27 Big Eight Conference football victory, sending Memorial players racing onto the field to join the end zone celebration and leaving Middleton players and coaches stunned.

“This is probably the best sports moment (for me) in high school, for sure,” Schaefer said. “No question about it.”

Memorial (4-0 overall, 4-0 Big Eight) rallied from a 27-17 deficit in the final 1 minute, 36 seconds of the fourth quarter and seized sole possession of first place in league play.

“I dropped back and, despite my ankle, I kept going and slid to my left,” Ceniti said. “I thought, ‘This is it. I have to put one in the end zone.’ I saw three white jerseys. I knew they were going to make a play.”

Schaefer, who caught a 26-yard touchdown pass with 1:36 remaining, said he fought for the ball on the final play with a Middleton defender.

“I was running a seam up the middle and I tried to split the ‘D,’ ’’ Schaefer said. “I told Jason before the play that if you make the throw, I’m going to go get it. This was a team win here. We never gave up.”

Middleton co-coach Tim Simon said he believed there was simultaneous possession between the receiver and Cardinals senior defensive back Jake Klubertanz, but that the offense gets the call in that situation.

“It’s hard to reflect on; it hurts so bad and the players are hurting so bad right now,” Simon said.

Middleton (2-2, 2-2) had possession with 1:34 to play, but failed to effectively move the ball against the fired-up Memorial defense after an intentional-grounding penalty on first down. After a punt, Memorial took over at its 49 with 1:04 remaining.

Ceniti's 10-yard scramble on fourth-and-6 gave the Spartans a new set of downs at the Cardinals' 37. After a delay-of-game penalty, a Ceniti pass completion on third down again kept the drive alive and led to the winning touchdown pass.

Middleton had a 20-10 lead in the fourth quarter before Ceniti threw a 27-yard touchdown pass to Kam Marshall with 6:42 left. Cardinals senior quarterback Bryce Carey answered with an 84-yard touchdown run that put Middleton ahead 27-17 with 3:07 to play — and seemingly in control.

“I’ve been doing this long enough that I don’t breathe until the last second goes off the clock,” Simon said. “The last play was an indication of that tonight.”

More than 100 yards in penalties hampered the Cardinals but they were opportunistic, taking advantage of Memorial turnovers earlier in the game.

The Cardinals took advantage of a mishandled punt, with junior Jake Pavelski recovering at the Memorial 23-yard line with 5:32 left in the third quarter. Sophomore Sawyer Pertzborn converted a 22-yard field goal, giving Middleton a 17-10 lead with 2:51 remaining in the third quarter.

Pertzborn added a 19-yard field goal with 8:42 to play, extending Middleton’s advantage to 20-10.

The Spartans had closed within 14-10 when Ceniti broke three tackles and raced 42 yards for a touchdown with 7:12 left in the third quarter — spraining his ankle in the process.

Memorial struck first in the game. Junior Kole Kerkhoff gave the Spartans a 3-0 lead with a 23-yard field goal with 7:59 left in the second quarter.

Memorial had taken possession at the Middleton 35-yard line after a 25-yard interception return by senior defensive back Tra’vaughn Harper and a 15-yard personal-foul penalty against the Cardinals. Spartans senior tight end Michael Cerniglia made an acrobatic grab at the Middleton 3, gaining 23 yards on the pass from Ceniti.

The Cardinals responded on the next drive, moving 68 yards for the go-ahead touchdown. Max Schlicht, a 6-7 senior, broke several tackles and scored on a 24-yard reception from Carey with 3:13 left in the second quarter.

On the next possession, Middleton took advantage of Marshall’s fumble at the Spartans’ 20-yard line. Middleton senior Ortez Lockett was credited with the fumble recovery.

Carey ran 11 yards to the Memorial 4 and on the next play junior running back Kallion Buckner swept 4 yards around left end — increasing Middleton’s lead to 14-3 with 32 seconds left in the first half.

The Cardinals and Wildcats, both 3-1, are a game behind unbeaten Madison Memorial in the Big Eight race.

Peterson, a former water polo player at Indiana University, worked for the NCAA and Indiana prior to being hired at Madison West this summer. Administrators hope Peterson will bring stability to the job, which has seen rapid turnover recently.

Waunakee's Jarrett Wulf, Will Ross combine for six TDs in win over Reedsburg

WAUNAKEE — Jarrett Wulf won’t deny it: Being the Waunakee quarterback and running the Warriors’ high-powered offense is a pretty sweet gig.

MONONA — And the beat goes on.

In his first year as Memorial's coach, Harris directed the Spartans to their first Big Eight Conference title since 2009.

Beloit Memorial's Matthew Wedig and Middleton's Kevin Meicher were first-team selections on both offense and defense.

Cerniglia, a tight end for the Spartans, says he has orally committed to Northern Illinois University.

Sprout plans to compete in football and baseball at Carroll University.

Ceniti, among the state's top-ranked senior quarterbacks, leads the Spartans into a season-opening clash Friday night at Sun Prairie.

Madison Memorial's Dryden Schaefer (18) comes up with the winning reception on the final play of the game against Middleton. Schaefer had two touchdowns in the game.

Middleton's Kallion Buckner runs for yardage as Madison Memorial's Will Sprout gives chase in the first quarter. Buckner had a 4-yard touchdown run in the second quarter.