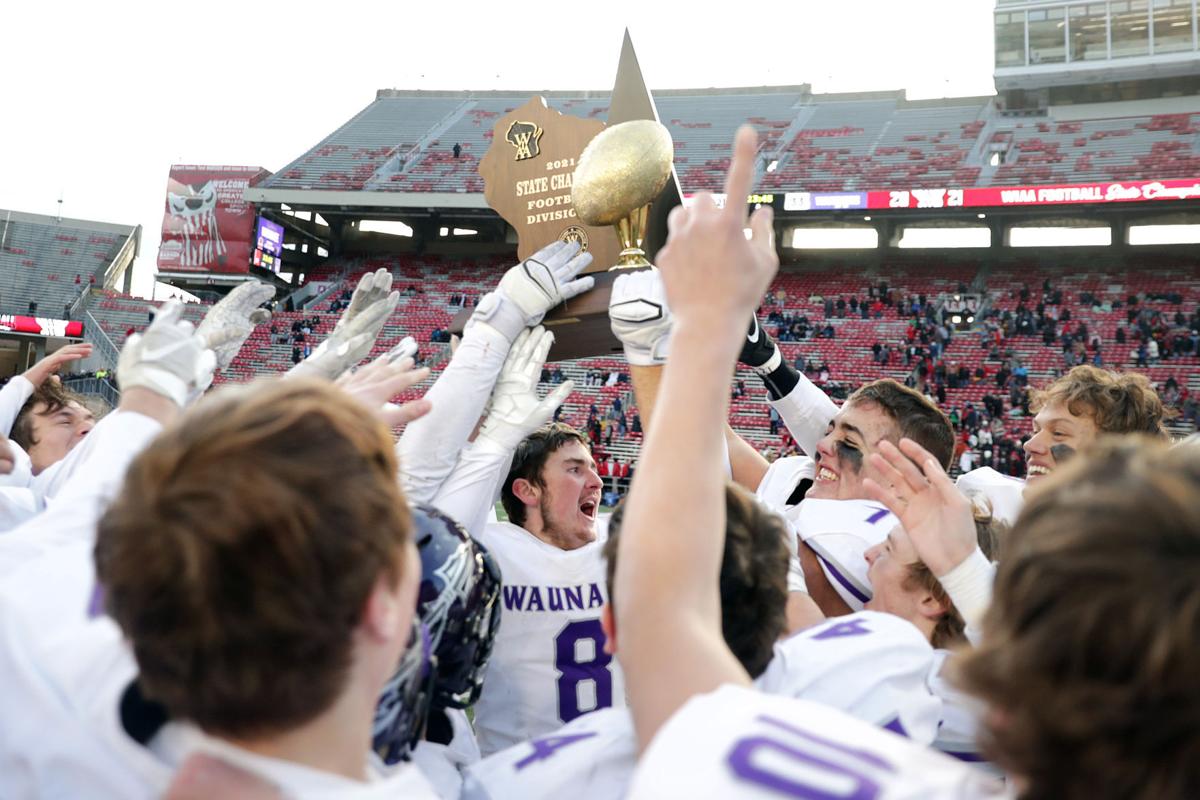 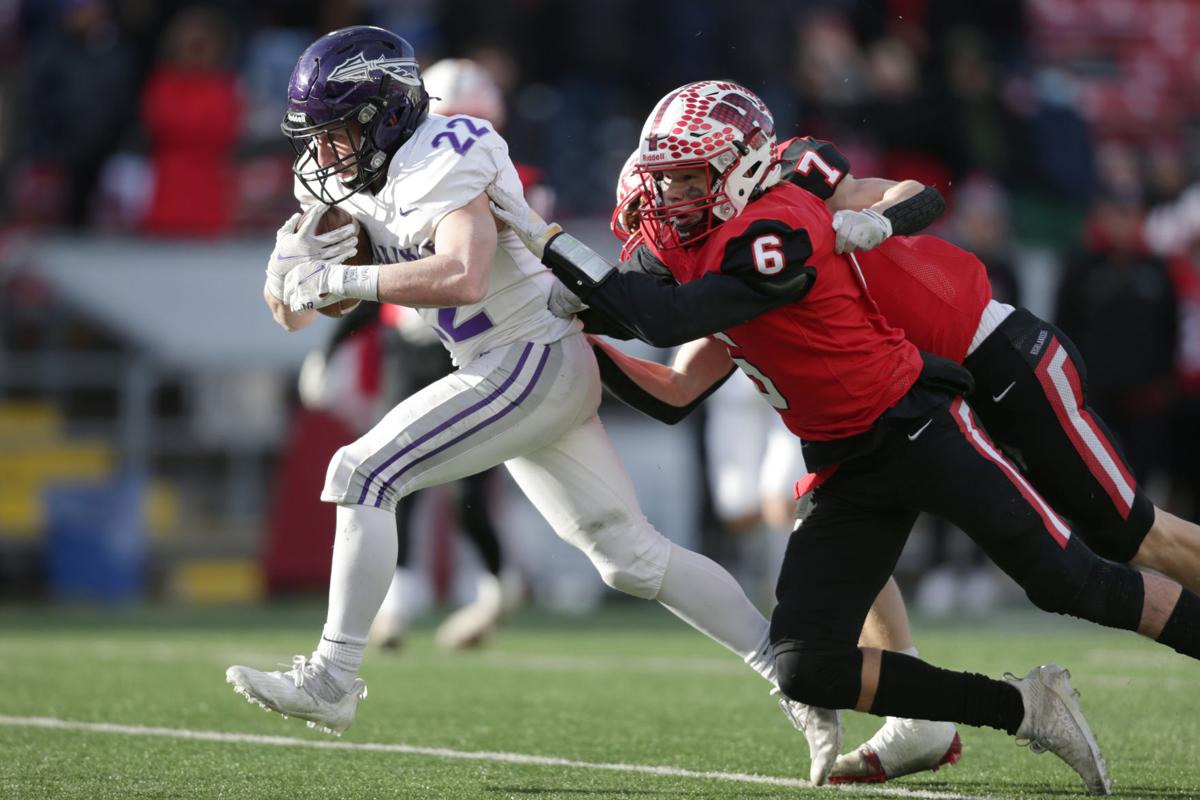 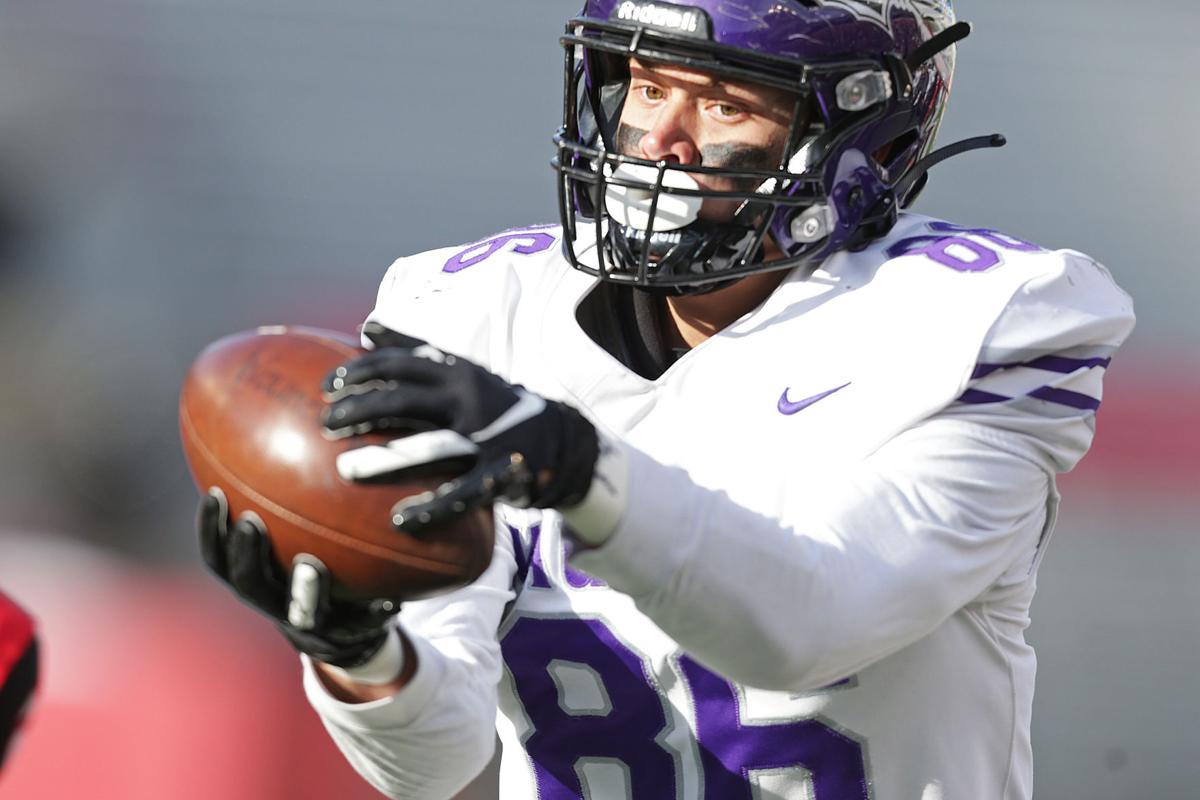 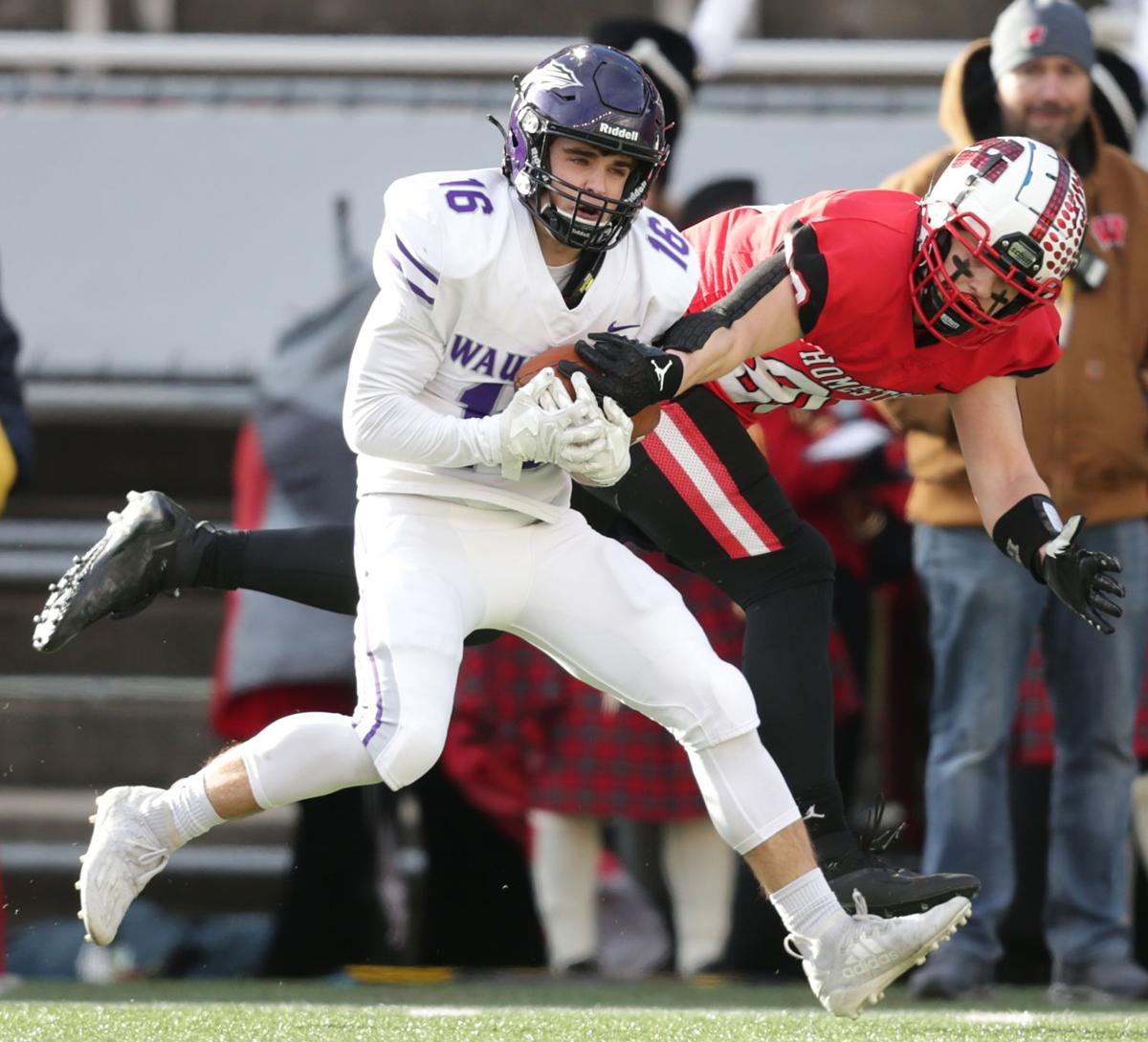 Of the returning players on this year’s Waunakee football team, Quentin Keene and Andrew Keller are two of the most familiar with the bright lights of Camp Randall Stadium.

The tandem played crucial roles for the team that lost 31-30 to Brookfield East in the 2019 WIAA Division 2 state championship game. After having the lights go out on them two years ago, the senior best friends shined in them Friday afternoon.

Keene completed 12 of 18 passes for 193 yards with two interceptions and a pair of touchdowns — both to Keller — including the game-sealing 1-yard score in a 33-21 win over Mequon Homestead in the Division 2 championship game. It’s the seventh title for the Warriors, tying them with Edgar, Kimberly, Lancaster and Stratford for the second-most in state history.

Coach Pat Rice, who has led the Warriors to all seven titles during his 29 year tenure, found it fitting his senior standouts helped put the exclamation point on another gold ball coming to Waunakee.

“It was pretty ironic, but it should be those two,” he said. “They’ve done a lot for us, and I’m happy it was those two.”

Keene and Keller wouldn’t have had it any other way, either.

“To come back with your best friend, and to come back and make a play like that in the end, it’s pretty special and I probably won’t ever forget,” Keene said.

Keller added: “We live next to each other and hang out almost every day; we have so many classes together and he’s a special guy. I’ll miss playing with him.”

The Warriors capped off another unbeaten season in an unfamiliar way in comparison to how they’ve played all season. A quick-strike offense all year, Waunakee methodically drove the ball down the field to seal the win after the Highlanders (11-3) pulled within 27-21 with 9 minutes, 59 seconds left to play on a Sal Balistrieri 11-yard touchdown run.

Waunakee took over at its 24-yard line to start the ensuing drive and executed a 12-play, 76-yard march that burned 6:47, ultimately putting things away on Keene’s 1-yard pass to Keller on a shallow out route to the right side of the end zone with 3:06 remaining.

The drive looked dead at one point as the Highlanders backed the Warriors into a third-and-19 from the Waunakee 29. Keene hit Mitchell Jarosinski for just a 15-yard gain on the play; however, Homestead’s Anthony Chung delivered a crunching tackle to the Warriors receiver that was flagged for a 15-yard personal foul to prolong the drive.

“It was a tough call and I think it would have been fourth-and-4, maybe, if there’s no penalty there and maybe they’re kicking it,” Homestead coach Drake Zortman said. “I have to look at the film. I don’t know and I don’t want to speculate on a call without seeing the film.”

The Highlanders worked their way to the edge of the Warriors’ red zone, but the Waunakee defense locked in from there. After Connor Carroll dropped Balistrieri for a 7-yard sack to set up fourth-and-17, the Warriors knocked down the ensuing pass to set up the clinching kneel downs.

“This group was knocked down in the early season a couple games, but we stayed in, fought and found ways to win. River Falls we beat in overtime, Menomonie we beat at the end, Hartford we came from behind and today was a battle. So just how resilient they are and how they can play the next snap,” Rice said.

Balistrieri's pass into Triple coverage is batted down and Waunakee will kneel out the clock for another state title #wiaafb #wisfb pic.twitter.com/iTW0XmpdjI

“It’s a group that’s wanted to be great and a group that’s been committed to being great for a long time, so for them and us to achieve it really speaks volumes about the character of these guys. I love this group and the way they bounced back.”

The Warriors needed to rebound Friday after a rough start.

Keene was intercepted to end each of the team’s first two drives, including by Jack Crowley on a deep pass intended for Ben Farnsworth at the Homestead 33, as Waunakee had four first-half turnovers. After the second interception, the message for Keene was simple.

“I just said, ‘Just keep ballin’ baby,’” Keller said. “He’s a big-time player; you got to go through the ups and the downs, and on the biggest stage he shows up, big time, and he clearly did.”

After forcing a punt on the ensuing Homestead drive, the Warriors took over at the Highlanders’ 48-yard line and wasted little time finding the breakthrough. Waunakee needed just five plays to score as Keene connected with Keller, an Iowa State commit, on a 34-yard pass with 23 seconds left in the first quarter for a 7-0 lead.

The one-score cushion held deep into the second quarter before the Highlanders pulled even with 2:12 left before the break on a Balistrieri quarterback sneak. The deadlock didn’t last long as Farnsworth set a state record by returning the ensuing kickoff 97 yards for a touchdown and a 14-7 lead.

The Warriors quickly got the ball back on a takeaway of their own with Caden McCurdy snagging a deep Balistrieri pass on the next drive, and just four plays later Michael Gnorski gave the Warriors a 20-7 halftime lead with a 19-yard touchdown run with 32 seconds remaining.

“He’s amazing,” Keene said of Gnorski, who rushed for 80 yards and two scores on 13 carries. “I love him to death. He’s worked so hard all of high school, and for him to come out and play one of his better games in the state championship game, is pretty special.”

After a Homestead score on its second drive of the second half pulled the Highlanders within 20-14, the 5-foot-8, 167-pound running back extended the lead back to 13 as he rushed in untouched from 24 yards out with 2:37 left in the third quarter.

Balistrieri had 217 total yards and all three scores, while Joe Ollman rushed for a game-high 135 yards on 32 carries to lead the Highlanders.

While it may be his seventh time hoisting a gold ball, Rice was still thrilled to see his team come away with a win at Camp Randall.

“Each team is special and it all kind of builds on each other, but I’m so happy we have such great leaders, great seniors and a great coaching staff,” he said. “It’s been a good year, a fun year and an exhausting year from March 1 to basically today.”

Keller knows he won’t forget it, and for helping finish the job last year’s seniors didn’t get a chance to.

“We knew that last season was taken from us, so this season was mainly for the grade above us that didn’t have the opportunity to come out and play,” he said. “We really stuck by it, playing for them, because they guided us along the way.”

Senior quarterback Carson Hansen rushed for a 1-yard touchdown in the first quarter and a 26-yard run with 1:40 remaining in the fourth quarter as the Pirates (12-2) defeated the Warriors (11-3) in the Division 3 championship game. Burkett finished 16-for-23 passing for 276 yards and three touchdowns playing in Camp Randall, the place he'll call home next season.