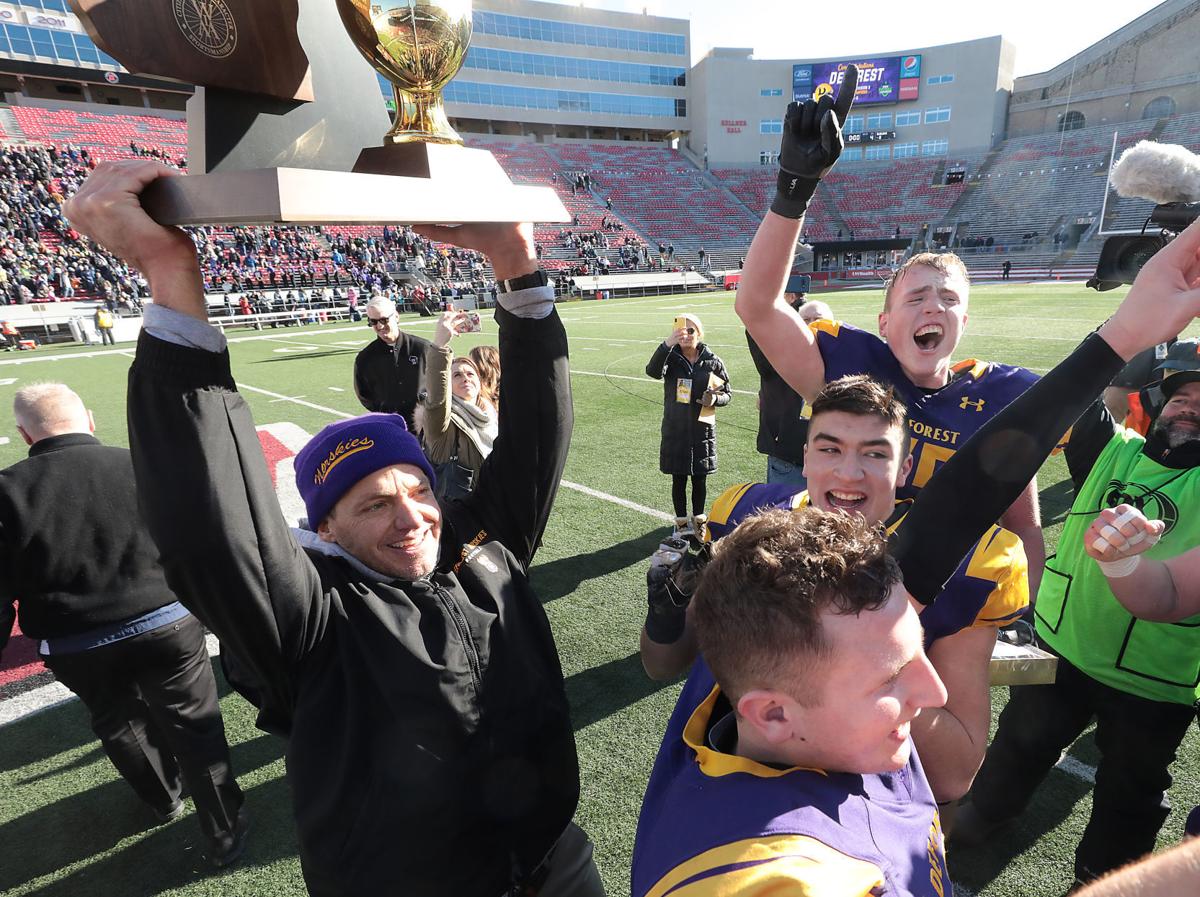 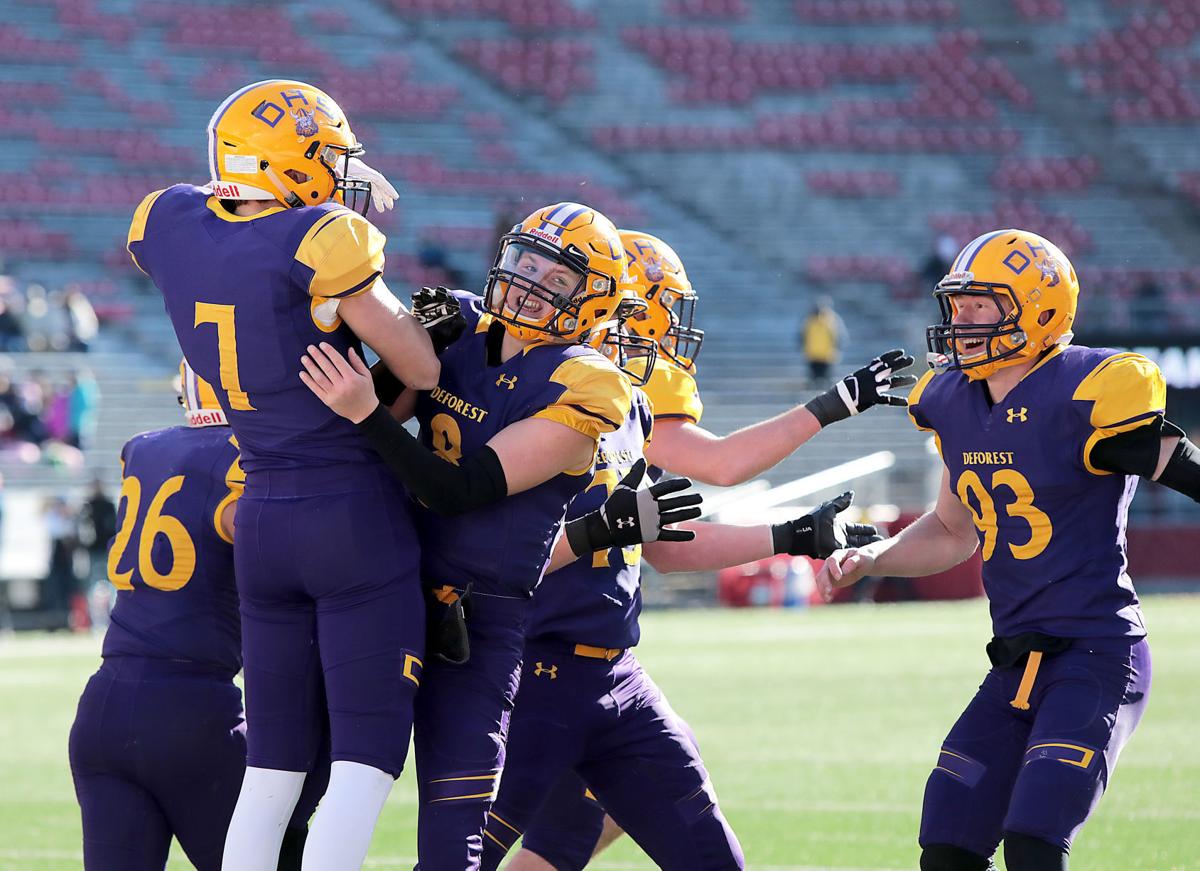 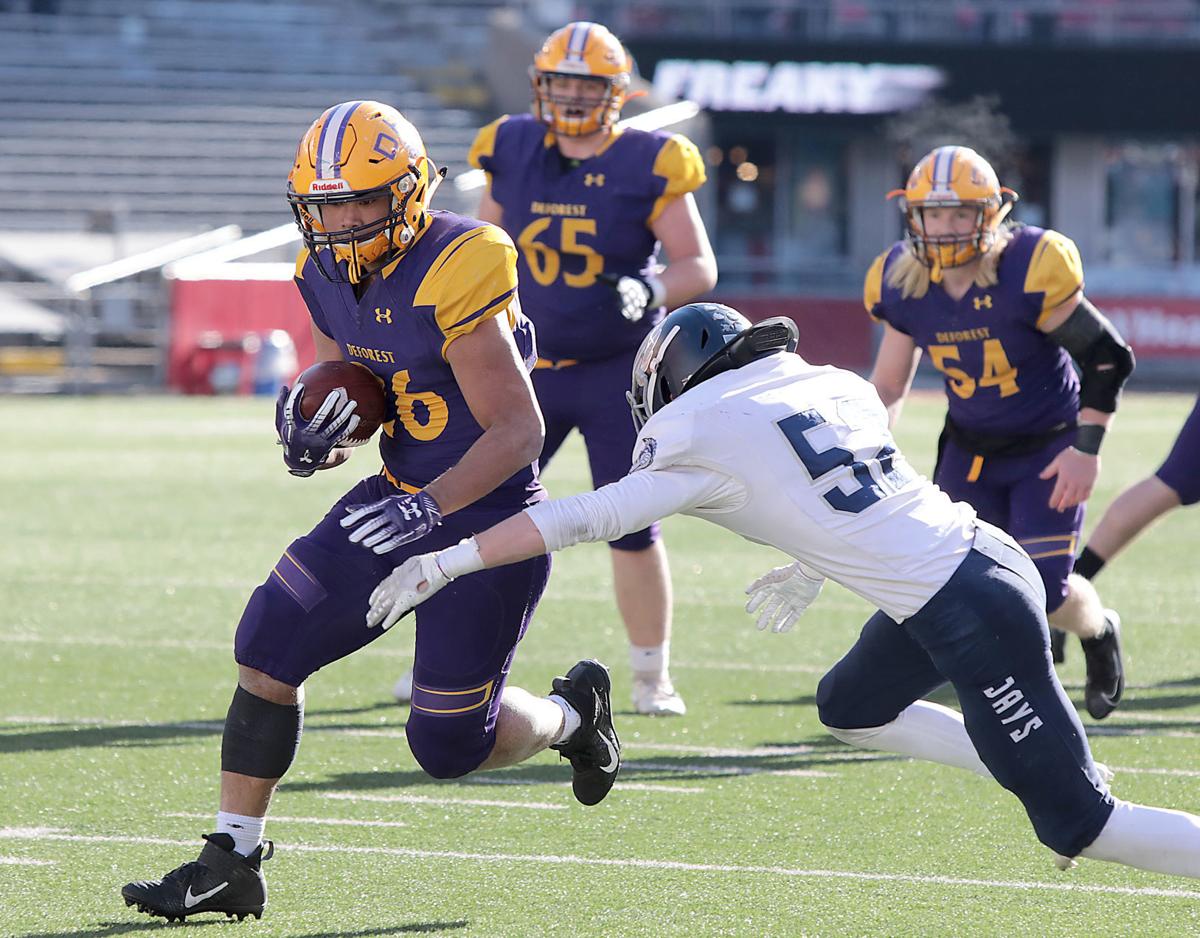 Up until then, their day had been filled with frustration. But when do-or-die time arrived on Friday, the DeForest football team transformed.

The Norskies’ sputtering offense became a precision machine, bulldozing over Menasha for a last-minute 8-7 victory in the WIAA Division 3 state championship game at Camp Randall Stadium.

Here’s to Hollywood endings. For football games, for dream seasons — and for storybook careers.

Friday’s big finish meant all of that and so much more to Norskies coach Mike Minick — a player on Jerry Roelke’s 1982 state championship team and a coach who took over the program when Roelke stepped down after the 1999 season.

Roelke passed away early last month, not long after Minick announced this would be his last season as coach.

All of that provided quite an emotional backstory to the climactic finish on Friday — an all-or-nothing championship drive that will never be forgotten by Norski Nation.

DeForest (14-0) covered 63 yards in six plays and 43 seconds, with junior running back Gabe Finley catching a dump pass from senior quarterback Trey Schroeder and willing himself through two defenders for a 13-yard touchdown with 32 seconds remaining.

“I was the second option on that play. I was supposed to block for Trey,” Finley said. “But he knew from watching film that it might be there, so he was looking for me.”

That touchdown, though, only made victory possible. The journey wasn’t complete until sophomore Nolan Hawk took three steps around a Menasha defense that was packing the box and caught a wide-open pass from Schroeder for a 2-point conversion that brought home the championship trophy.

“I was very nervous. My legs were shaking,” Hawk said when the play — Left Wide 29 Packers 4 Pop — was called. “I just thought, ‘You better catch this ball.’”

“It was like a Tim Tebow jump pass,” Schroeder said. “We tried that in practice and it looked good. We were saving it for a good time.”

What a good time it was.

“We dialed it up (and) it couldn’t have been more perfect,” Minick said. “(Schroeder) is quite a competitor. … We’ve got an amazing group of seniors who are going to fight till there are zeroes on the clock.”

“We knew we had shot ourselves in the foot earlier,” said Schroeder, who threw two first-half interceptions and lost one of his team’s two second-half fumbles inside Menasha territory. “But we had done a lot of work in our two-minute drill. We knew we would figure it out in the end.”

The winning drive started with a pass interference penalty. Then, Schroeder was forced out of bounds for a 4-yard loss, and an incomplete pass made it third and 14 from the DeForest 48.

That’s when a crisp pattern and a pinpoint pass to Logan Bierman produced a 28-yard gain to the Menasha 24. After a spike to stop the clock, Schroeder hit Hawk for an 11-yard gain to the 13, and then found Finley open a few yards past the line of scrimmage for the touchdown.

Menasha (12-2) scored on the game’s opening drive, going 67 yards in 12 plays and eating up more than half of the first quarter. The key play came when senior quarterback Cole Popp scrambled for 15 yards on a fourth-and-nine play from the DeForest 35.

Three plays later, Davontre Smith ran around right end for a nine-yard score and a 7-0 lead at 5:34 of the first quarter.

DeForest’s defense held Menasha to seven first downs and 166 yards of offense the rest of the way, with junior Trace Grundahl and seniors Marlon Cystrunk and Adam Szepieniec intercepting Popp passes and Cystrunk forcing a third-quarter fumble that was recovered by senior Devin Morand-Rivers.

“We’ve got the best defense in the state and we knew they were going to give us a chance,” Schroeder said.

DeForest had its chances earlier in the game but let them get away time and again. Schroeder threw second-quarter interceptions to seniors Brady Batchelor and Brady Jurgella; Alex Endres lost a fumble at the Bluejays 24 two plays after a Menasha turnover; and Schroeder lost the ball on the Menasha 41 with 1:39 to play.

But after Schroeder’s fumble, the defense held Menasha to a three-and-out, took a punt at its 37 and acted out its Hollywood finish.

“We’ve been working every single day for so many years, working for this,” said Schroeder, who completed six of 15 passes for 97 yards and ran for 52 more.

After a rousing rendition of “Who Let the Dogs Out” in the DeForest locker room, Minick cut the last rung off the symbolic ladder that represented DeForest’s 14 steps to the state title.

And he placed it atop a Plexiglas case that held a game ball from DeForest’s 1982 state championship game, with “Coach Jerry Roelke” written on top.

“He meant so much to so many people,” Minick said. “All we could do was carry on his legacy and what he taught us.”

WIAA football playoffs: Sharing the load has brought more to everyone in Madison Memorial's program

There is no shortage of passion for DeForest’s senior dual-threat quarterback, Trey Schroeder.

Penn State commit Leilani Kapinus, who played in just five games as a junior last year before suffering a knee injury, scored 15 of her game-high 21 points in the first half for the Spartans in an 82-60 win.

Memorial graduate Peterson replaces Steve Collins, who stepped down after the season.

DeForest coach Mike Minick is the All-Area coach of the year after leading the Norskies to the WIAA Division 3 state title.