After 20 years coaching DeForest, Minick knew he’d miss it. But he also said he was excited to focus on his team and enjoy the ride — seeing just how far the Norskies could take their postseason run.

Minick and the undefeated Norskies have taken it all the way to Camp Randall Stadium.

And for the first time since finishing as Division 2 runner-up to Kimberly in 2007, Minick and DeForest are back in a state title game.

Minick, as is his manner, deflected a question away from himself and toward his team and its 22 seniors when asked what it means for Minick and the Norskies to reach the state championship game.

“It means a lot to our team,” Minick said. “Our seniors have worked hard to be in this spot. I think they are deserving. They are a really great group of kids. I’m just really proud of them. We are fortunate enough to be here. But again I think they have worked to get to this point. Sometimes, you need things to kind of line up and they have to get us to Camp Randall.”

The Norskies, led by coach Jerry Roelke, won the Division 4 championship in 1982. They defeated Oconto Falls 52-24 in the first year the title games were played at Camp Randall.

“It’s been an emotional roller coaster with coach Roelke passing away this year,” said Minick, a former standout player for DeForest who played on the 1982 title team and was an assistant on Roelke’s staff prior to succeeding the longtime Norskies’ coach. “(He was) somebody I admired deeply and somebody that was a father figure to me and many other kids, as many coaches are. We miss Coach. Just a tremendous man, a leader, and he did things the right way. We just admire him. We are always thinking about him a lot around here.

“It’s been a fun year. But I decided a couple months ago, actually a little longer than that, that this would be my last year. We let the kids know and they knew about it early. So, we just talked about `Let’s go out and have a great year and see what we can do.’’’

The left-handed Schroeder and senior receiver Lane Larson, who was the Badger North Offensive Player of the Year, have a strong passing connection that began in youth football.

“We have a group of seniors that have kind of led this team to where we are today,” Minick said. “Just really good leadership from that core group.”

“Those are tough teams to go against,” he said, adding: “You always know you are going to get their best.”

Minick said Menasha offers numerous challenges due to its size, speed and athleticism.

“We are very impressed with their team and how they are coached and what they do schematically,” Minick said.

“It speaks volumes about the conference,” Waunakee coach Pat Rice said. “And, hopefully, we both show up and play well.”

Said Minick: “I think it’s pretty neat to have two teams from your conference playing on Friday. (Waunakee is) a great program, a great team. So, we have a lot of respect for them and what they do. It’s always been a great game between us and them. It says a lot for our conference, I think. I wish them the best Friday, also.”

Deven Magli picks off two late passes after Trey Schroeder runs for two TDs, putting the Norskies in the final for the first time since 2007

The Norskies win 35-13 to remain unbeaten and hand the Warriors their first loss.

The left-hander completes eight passes for 235 yards in a 28-0 win.

Keene, a sophomore, stepped in for the injured Nelson in last week's WIAA Division 2 semifinal against Waukesha West and produced a win.

Buechel, a receiver and safety, plans to attend Michigan Tech.

The DeForest Norskies beat Menasha 8-7 to finish 14-0 and win a state championship in Mike Minick's final season as coach.

Bonde has coached softball, volleyball and basketball at Stoughton. 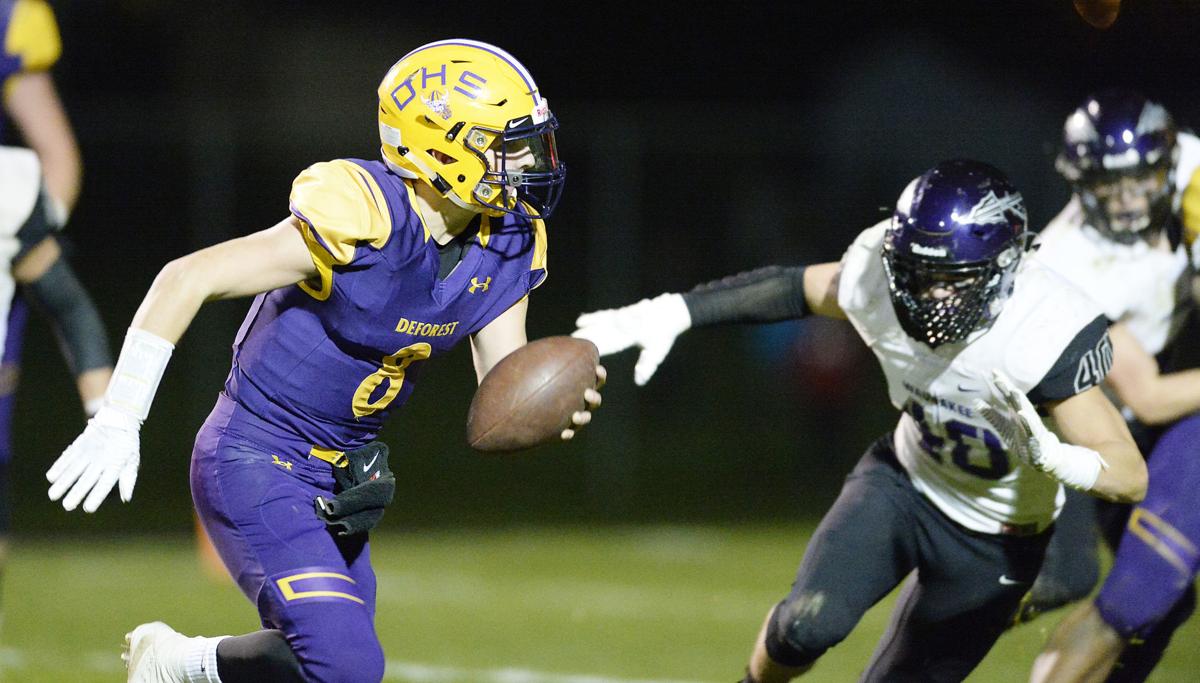