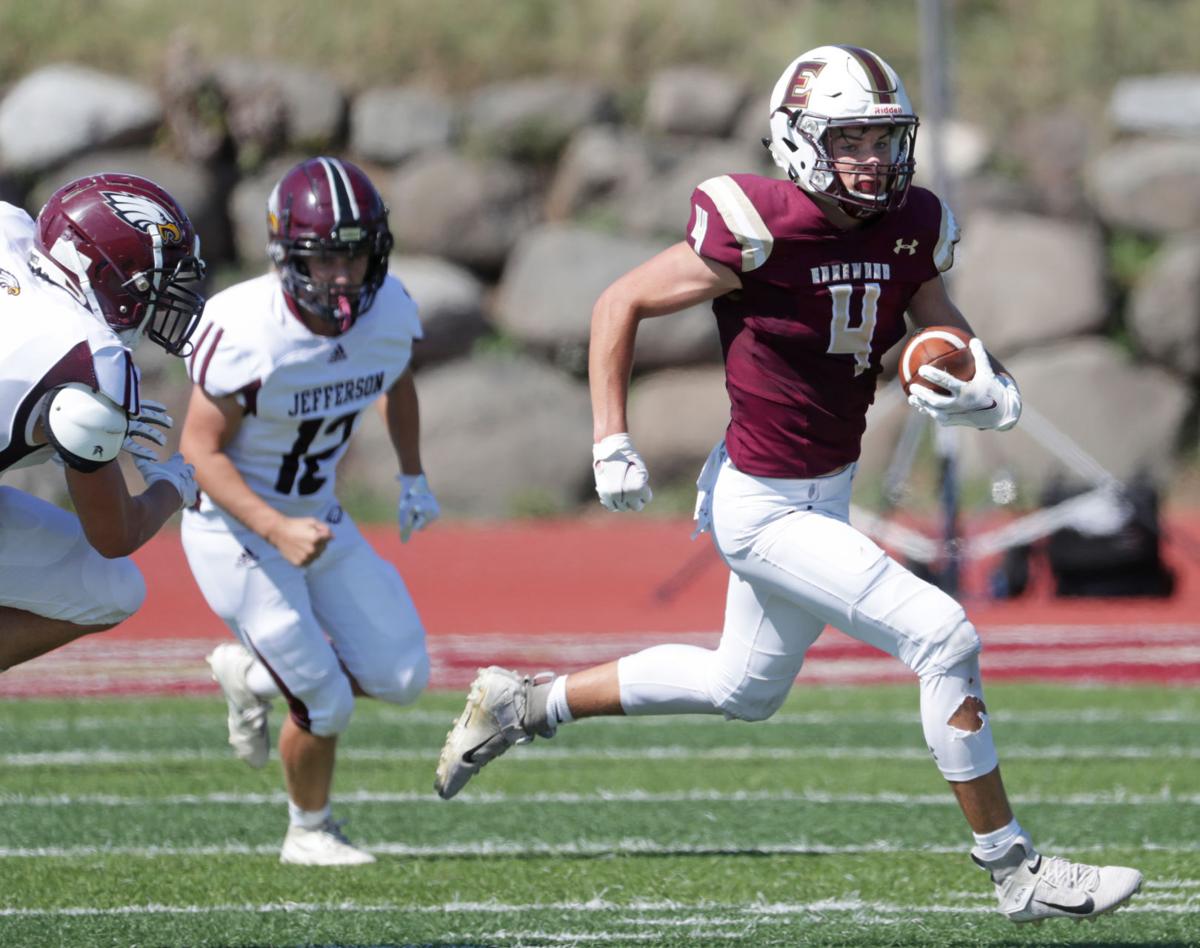 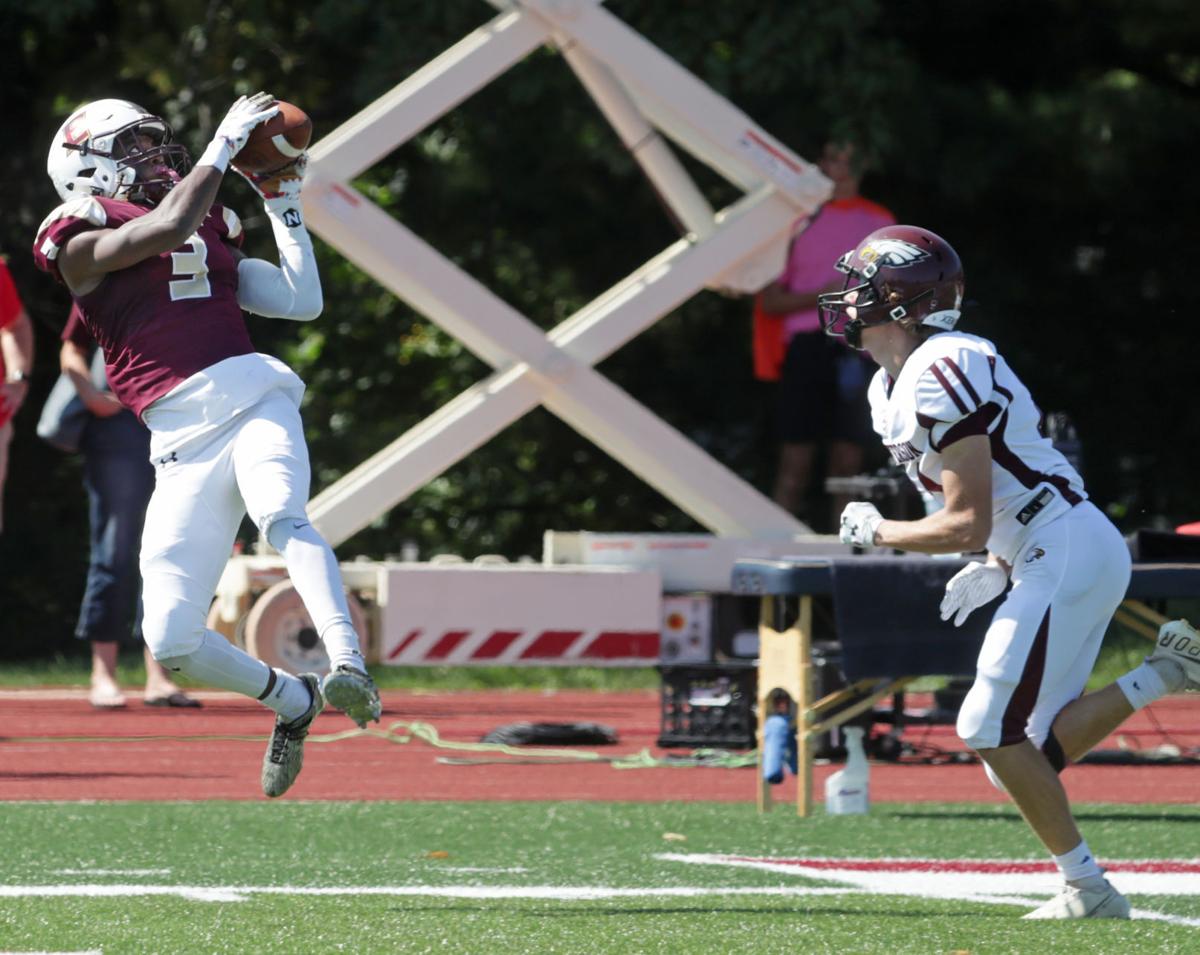 Madison Edgewood's Cam Fane catches a pass near the end zone against Jefferson's Paden Phillips in the first half.

In host Edgewood’s 35-7 Rock Valley Conference victory over Jefferson on Saturday, the 6-foot-1, 184-pound Trudgeon was a difference-maker while lining up as a running back, receiver, safety, punt returner and kick returner.

It is clearly a role Trudgeon embraces.

“I love it,” he said. “I just want to make as many plays as I can and help the team win as much as I can. I love being on the field every play and doing all I can to help this team.”

Trudgeon, who has committed to the University of Wisconsin football team as a preferred walk-on, caught two touchdown passes, intercepted a pass and recovered a fumble.

On offense, he topped the Crusaders (5-0, 3-0 Rock Valley) with five catches for 147 yards. On defense, his nine total tackles led the way.

“He means everything (to the team),” Edgewood coach Jesse Norris said about Trudgeon. “He’s a Grade-A leader. His character is phenomenal. He’s a tremendous locker room kid. Guys rally around him. When we need a play, he’s the one who makes it.”

Madison-area football preview: 3 other things you need to know this season

Trudgeon, running a wheel route out of the backfield on Edgewood’s first series, caught a 51-yard touchdown pass from senior quarterback Joe Hartlieb — Trudgeon’s friend since kindergarten — with 6 minutes, 11 seconds left in the first quarter.

“We are taking it one week at a time,” said Trudgeon, usually on the field except for extra-point attempts and punt coverage. “Coach always says ‘1-0’ at the end of the week, so we are trying to not look too far into the future. We really have bonded together. We have good chemistry on both sides of the ball.

Trudgeon, recruited as a safety, made his UW oral commitment in June.

“My recruiting was really just getting started when I got that offer, so I thought, ‘Why wait?’’’ Trudgeon said. “(I like) the community that UW brings. The campus is beautiful. I’ve lived here my whole life. I love the city. So, I wanted to stay here.”

The Crusaders only had 16 minutes, 36 seconds of offensive possession, but they optimized their opportunities, particularly through the air.

Edgewood — ranked 10th in the Medium Division of The Associated Press poll and fourth in Division 4 in the state coaches’ WisSports.net poll — gained 278 yards passing on 12 completions.

Haering’s score increased the Crusaders’ lead to 21-0, and was set up by Edgewood senior defensive lineman Martius Bautista’s fumble recovery at the Eagles’ 43-yard line.

“Joe (Hartlieb) really stepped up this week,” Norris said. “I thought he did a phenomenal job. He’s really improving each week. Obviously, any time Cam touches the ball, it can go the distance. From an offensive standpoint, if you are scheming against our style of offense, they have to scheme against a spread and they have to scheme against a Q-run.“

Trudgeon closed the half with an interception near the goal line, a pick he returned 47 yards.

Folkers’ 4-yard touchdown run boosted the Crusaders’ lead to 28-0 with 9:30 left in the third quarter.

The Eagles, operating from the Wing-T formation, gained 247 yards rushing on 47 carries, but didn’t score against the Crusaders’ defense until the fourth quarter.

Jefferson was led by senior Nate McKenzie, who had 119 yards rushing on 15 attempts and also caught two passes for 19 yards.

McKenzie scored on a 6-yard run with 8:28 remaining to play.

Norris said the Crusaders changed their defense for the game, loading the box against Jefferson’s running attack.

“We knew coming in that this would be a very physical game for us — a statement game for us,” Norris said, mentioning the defensive play of seniors Chase Koch (five tackles, including two tackles for loss), Carson Hughes (four tackles), Andrew Budzinski (three tackles) and freshman nose tackle Jackson Kitzmiller.

Jefferson had an interception and lost three fumbles.

The 5-foot-10, 150-pound Nolden had 25 receptions, averaging 20.8 yards per catch, and scored eight receiving touchdowns, which was third-best in the state during the WIAA’s alternate fall season in the spring. He also had five interceptions (tied for second in the state, according to WisSports.net) and 52 tackles, three tackles for loss and 3.5 sacks for 6-1 Belleville, which will be in the SWAL this fall. Nolden is among the senior receivers to watch by WisSports.net. He’s the cousin of Belleville coach Mike Nolden.

The 6-2, 180-pound Syse started the season as a backup prior to taking over the starting role due to an injury and wound up with the second-most passing yards and third-most touchdown passes in the state in the alternate season. The left-hander completed 56.6% of his passes for 1,481 yards and 17 touchdowns, with seven interceptions. He also ran for three touchdowns for Belleville, which finished ranked sixth among small-sized schools in the state coaches’ poll. He was listed among the senior quarterbacks to watch by WisSports.net.

The 5-foot-8, 150-pound Colts was an Eastern Suburban second-team all-conference selection at both running back and inside linebacker as a junior. He finished the fall 2020 season leading the team in rushing yards and receiving yards and was second on the team in tackles.

The 6-1, 184-pound Folkers demonstrated athleticism and playmaking ability at quarterback when the Crusaders finished 5-3 playing in the fall of 2020. He was inserted after an injury at the position and wound up throwing for 909 yards and 10 touchdowns and rushing for 246 yards and five touchdowns for Edgewood, which will play in the Rock Valley.

The 6-1, 178-pound Trudgeon, a University of Wisconsin preferred walk-on, was an all-around standout in fall 2020. He had 77 tackles, two tackles for loss and two interceptions as a defensive back. He also had 37 receptions for 552 yards and eight touchdowns, 143 yards passing, 108 yards rushing and was a dangerous return specialist. He was rated as the No. 2 senior defensive back and 34th senior overall entering the season by WisSports.net.

The 6-1, 180-pound Gillen should be a top target on offense after catching 24 passes for 303 yards and four touchdowns in McFarland’s five games in the spring. He also had 27 tackles on defense for the Spartans, who will play in the revamped Rock Valley this fall.

The 6-foot-6, 225-pound Seagreaves, who’s orally committed to UW for football, was defensive player of the year and a first-team choice as a defensive end and receiver in the Rock Valley Large during the WIAA’s alternate fall season in the spring. This fall, with Monroe playing in the realigned Rock Valley, Seagreaves again will play defensive end, but likely will see time at right halfback in the Wing-T. Entering this season, he was ranked as the No. 2 senior tight end in the state and No. 11 senior overall by WisSports.net.

The 6-1, 215-pound Gloudeman was a SWC first-team all-conference linebacker (36 tackles) and running back (618 rushing yards, 11 touchdowns, along with 14 receptions) in 2020. He’s receiving NCAA Division I interest, including a preferred walk-on offer from UW, according to River Valley coach Tim Eastlick. Gloudeman was ranked as the No. 3 senior linebacker and No. 23 senior overall entering the season by WisSports.net.

The 6-0, 185-pound Wolff was an Eastern Suburban first-team all-conference selection in 2020 at running back and outside linebacker for the Pirates. Wolff led the team in rushing yards and rushing touchdowns and anchored Waterloo’s defense last season. He’s ranked as a player to watch among senior running backs and senior linebackers by WisSports.net.

Friday night lights out: A drone tour of the Madison-area's empty football stadiums

While most WIAA football programs have opted to play a shortened fall schedule due to COVID-19, most Madison-area high schools — including the…

ESPN's College GameDay to be at Wisconsin-Notre Dame

Though the Badgers are technically the home team next weekend against the Fighting Irish, GameDay hasn’t visited Madison since 2017.

The three-star running back was suspended on Aug. 31 by Badgers coach Paul Chryst after an altercation with a teammate in a residence hall.

Wisconsin kept its spot in the AP poll after its idle week.

The Badgers will be looking for their third consecutive win over the Wolverines with the previous two coming at a combined score of 84-25.

What former Badgers teammates say will be 'weird' about facing Notre Dame QB Jack Coan. And what won't

Wisconsin players and coaches refuse to buy into the hype of QB Jack Coan playing against his former team. They insist "it's Wisconsin versus Notre Dame."

Bud Keyes was a Badgers' quarterback who was a 10th-round draft choice of the Green Bay Packers in 1988. He's passing on his wisdom to his son, who's having an impressive start to the season.

Two-a-days are the glorified gridiron tradition of practicing morning and night to hone the body and sharpen the mind for the upcoming season.

Week 8's biggest matchups have a lot on the line.

Six of the seven in-state Wisconsin recruits advanced to Level 2 of the WIAA playoffs. Check out their stats and highlights.

Madison Edgewood's Cam Fane catches a pass near the end zone against Jefferson's Paden Phillips in the first half.