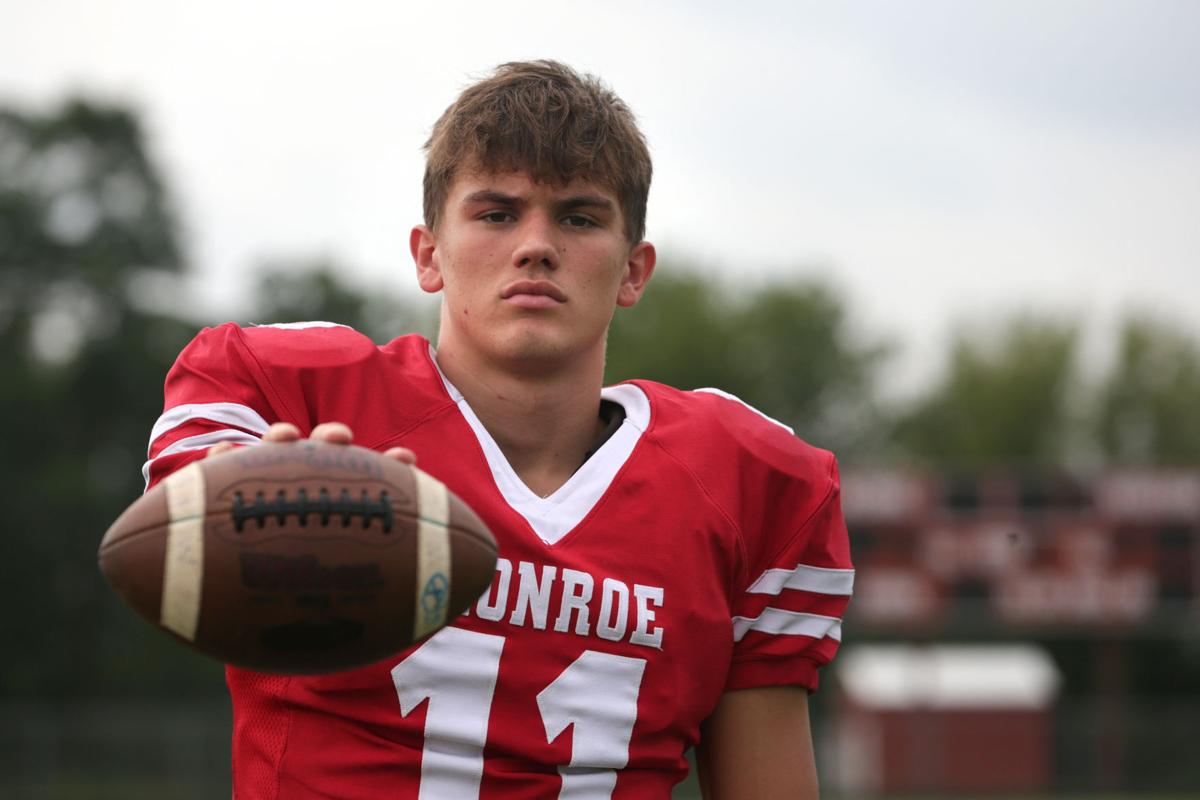 Monroe's J.T. Seagreaves was recruited by the Badgers to play tight end. 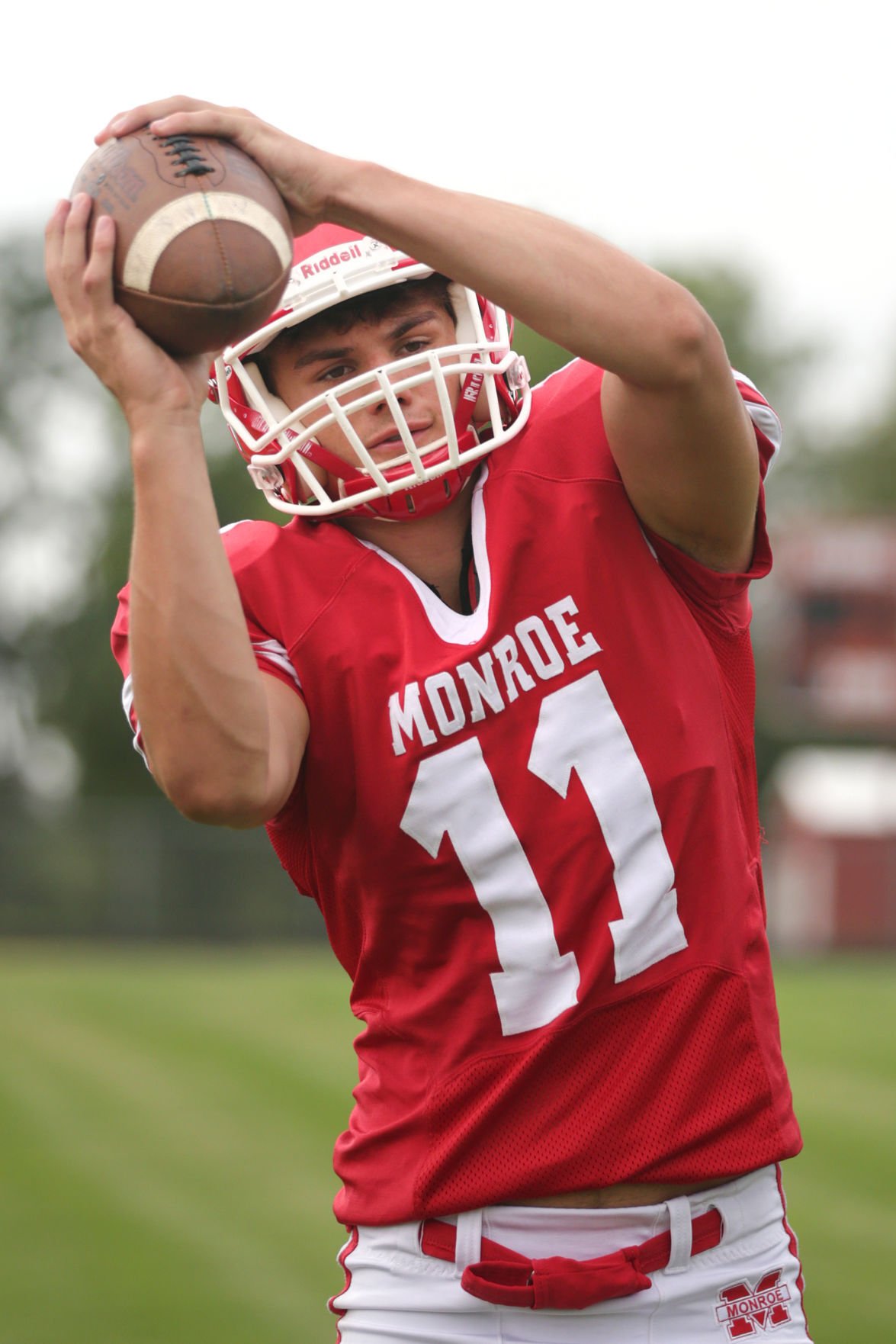 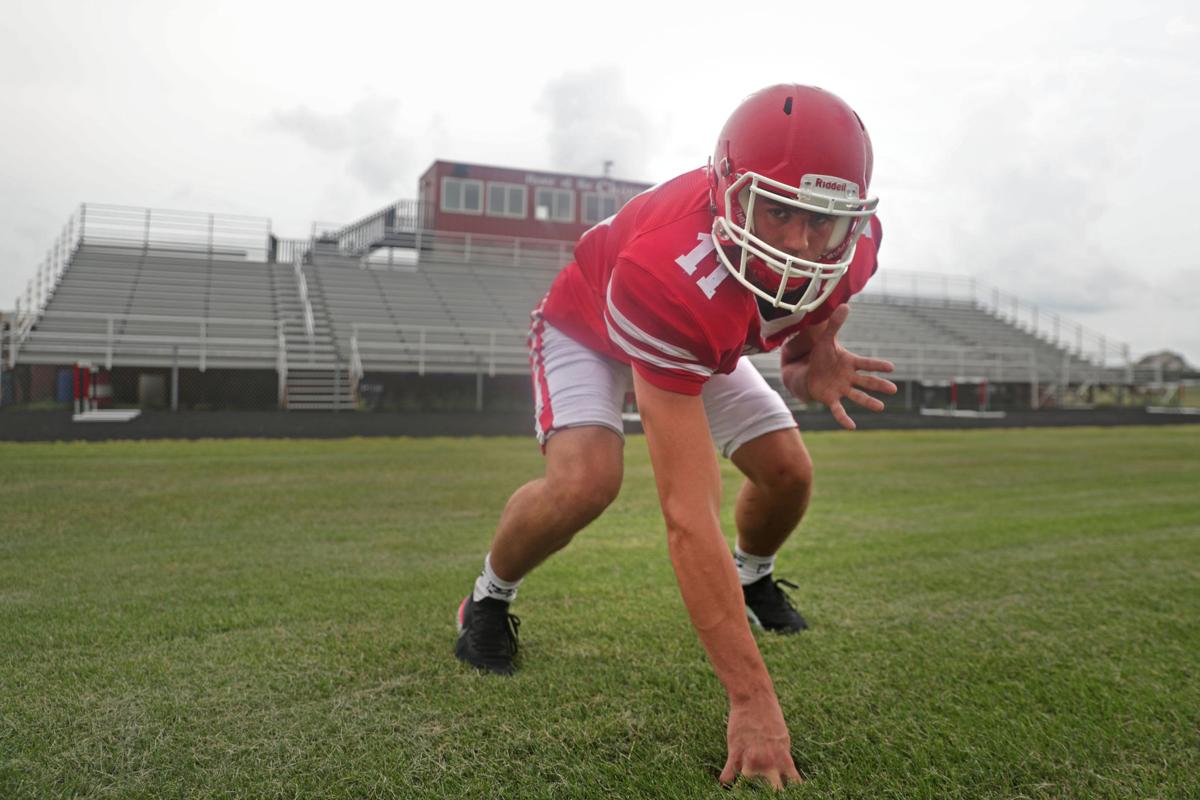 But it was when the 6-foot-6, 225-pound Seagreaves demonstrated prowess in the sprints during track season this spring that the attention increased exponentially in football circles.

“That’s when the phone started ringing off the hook football-wise,” said Monroe football coach Toby Golembiewski, mentioning early inquiries from Illinois State, Iowa and Minnesota. “It all just happened so fast and happened so late, as opposed to when it would happen in a regular year.”

Then came a whirlwind several days, which included Seagreaves playing six AAU basketball games in between stops at University of Wisconsin football camps on a Thursday (June 3) and a Monday (June 7), he said. After being offered, he made an oral commitment to UW for football about two weeks later in June.

“After a couple camps, I think they liked what they saw,” said Seagreaves, a senior this school year at Monroe whose given name is John Thomas (thus, J.T.). “I really liked the coaching staff and their values, and I thought I’d really fit in well there.”

Seagreaves, who was the Rock Valley Large defensive player of the year and a first-team all-conference selection as a defensive end and receiver last spring, said he was recruited by the Badgers as a tight end — a position he only has occasionally played for the Cheesemakers.

“I know everybody dreams of playing at that level and having that opportunity,” said Seagreaves, who is interested in studying engineering. “But it really was a shock to me at first. Then, kind of getting to know everybody, I was like, ‘This is where I want to be.’”

This fall playing football in the realigned Rock Valley Conference, he’s expected for the first time to line up at right halfback in the Delaware Wing-T offense Golembiewski uses, while again playing defensive end.

“There are some things that he can do that other kids can’t do, with his height, his speed and his length,” Golembiewski said. “It goes without saying in basketball, track and football and all his activities, he has those things. Some people have that, but they don’t have the other component — the will to win, the will to show up, the sacrifice — the different things that go along with football.

“Football is a work sport. Basketball and baseball, you play more games than you have practices. You have a game three or four nights a week. We practice four nights a week. He is a very gifted and talented person, who’s maybe looking at other sports, but he is choosing the work sport. … I am glad he has made the commitment to football. I am glad he made the commitment to football after high school.”

Prior to the events of the summer, Seagreaves said he felt some pressure about making a college decision. But he remained patient.

“I was just trying to sit tight because I knew I would get an opportunity,” said Seagreaves, who had gone back and forth between choosing football or basketball, sports he began in fourth grade.

He then was ranked the No. 2 senior tight end in the state and 11th overall senior football player entering the season by WisSports.net.

“With us being a (WIAA) Division 3-bracketed team, this doesn’t happen that often, that you get a player like this,” Golembiewski said. “We are not playing the (Hartland) Arrowheads, we are not playing the Muskegos. We are not at that high-profile level. And we are not from Texas or Florida, either. The (NCAA) D-I guys don’t make a lot of stops around here and the kids really have to go out of their way to go to exposure camps and things, and overcome a lot of stuff.”

“We have great hopes for this team,” Toby Golembiewski said.

Seagreaves said he plans to compete in his three sports this school year and not graduate early and leave for UW, which would be more difficult because Monroe is on a trimester system.

His younger brother, James, a sophomore who’s also a tight end and defensive end in the Monroe football program, said it was exciting his brother selected UW and will be closer to home after his first offers were from out-of-state schools. Older sister Bri attends UW, James Seagreaves said.

“I’m trying to enjoy it as it comes and make the best of every situation, whether it’s football season, my last basketball season or my last track season,” J.T. Seagreaves said.

The 5-foot-10, 150-pound Nolden had 25 receptions, averaging 20.8 yards per catch, and scored eight receiving touchdowns, which was third-best in the state during the WIAA’s alternate fall season in the spring. He also had five interceptions (tied for second in the state, according to WisSports.net) and 52 tackles, three tackles for loss and 3.5 sacks for 6-1 Belleville, which will be in the SWAL this fall. Nolden is among the senior receivers to watch by WisSports.net. He’s the cousin of Belleville coach Mike Nolden.

The 6-2, 180-pound Syse started the season as a backup prior to taking over the starting role due to an injury and wound up with the second-most passing yards and third-most touchdown passes in the state in the alternate season. The left-hander completed 56.6% of his passes for 1,481 yards and 17 touchdowns, with seven interceptions. He also ran for three touchdowns for Belleville, which finished ranked sixth among small-sized schools in the state coaches’ poll. He was listed among the senior quarterbacks to watch by WisSports.net.

The 5-foot-8, 150-pound Colts was an Eastern Suburban second-team all-conference selection at both running back and inside linebacker as a junior. He finished the fall 2020 season leading the team in rushing yards and receiving yards and was second on the team in tackles.

The 6-1, 184-pound Folkers demonstrated athleticism and playmaking ability at quarterback when the Crusaders finished 5-3 playing in the fall of 2020. He was inserted after an injury at the position and wound up throwing for 909 yards and 10 touchdowns and rushing for 246 yards and five touchdowns for Edgewood, which will play in the Rock Valley.

The 6-1, 178-pound Trudgeon, a University of Wisconsin preferred walk-on, was an all-around standout in fall 2020. He had 77 tackles, two tackles for loss and two interceptions as a defensive back. He also had 37 receptions for 552 yards and eight touchdowns, 143 yards passing, 108 yards rushing and was a dangerous return specialist. He was rated as the No. 2 senior defensive back and 34th senior overall entering the season by WisSports.net.

The 6-1, 180-pound Gillen should be a top target on offense after catching 24 passes for 303 yards and four touchdowns in McFarland’s five games in the spring. He also had 27 tackles on defense for the Spartans, who will play in the revamped Rock Valley this fall.

The 6-foot-6, 225-pound Seagreaves, who’s orally committed to UW for football, was defensive player of the year and a first-team choice as a defensive end and receiver in the Rock Valley Large during the WIAA’s alternate fall season in the spring. This fall, with Monroe playing in the realigned Rock Valley, Seagreaves again will play defensive end, but likely will see time at right halfback in the Wing-T. Entering this season, he was ranked as the No. 2 senior tight end in the state and No. 11 senior overall by WisSports.net.

The 6-1, 215-pound Gloudeman was a SWC first-team all-conference linebacker (36 tackles) and running back (618 rushing yards, 11 touchdowns, along with 14 receptions) in 2020. He’s receiving NCAA Division I interest, including a preferred walk-on offer from UW, according to River Valley coach Tim Eastlick. Gloudeman was ranked as the No. 3 senior linebacker and No. 23 senior overall entering the season by WisSports.net.

The 6-0, 185-pound Wolff was an Eastern Suburban first-team all-conference selection in 2020 at running back and outside linebacker for the Pirates. Wolff led the team in rushing yards and rushing touchdowns and anchored Waterloo’s defense last season. He’s ranked as a player to watch among senior running backs and senior linebackers by WisSports.net.

The 6-foot-6, 250-pound Hamm is the top-ranked senior defensive recruit for football in the state. His college finalists are the University of Wisconsin, Penn State, Ohio State and Notre Dame.

Pick 6: This week's intriguing games as the prep football season kicks off

Madison-area football preview: 3 other things you need to know this season

The 2021 football season is right around the corner. It's time to talk about the season's top talking points.

The Warriors, who played football in the spring, open the fall campaign where they left off.

Baraboo and Stoughton received the honor for the fifth time in the five years since the award began, while the four Madison public schools were among those recognized.

Sun Prairie, Waunakee and DeForest crack the top 10 among large schools, while Monroe and Lodi lead area teams in the division for medium-sized schools.

Waunakee-Middleton and Lake Mills-Madison Edgewood are among other intriguing high school football games this week. Games are scheduled for Thursday and Friday.

Badger Conference primer: How that conference has realigned this fall for all sports except football

The conference has moved to an East/West configuration, including North and South divisions in each conference.

Sun Prairie advances to 2-0 while Madison West and La Follette struggle to keep up in early season football action.

Mason Keyes threw four touchdown passes and finished 17-of-25 for 291 yards in a matchup of state-ranked teams.

Several of the area’s strongest teams are aware they are on a potential postseason collision course in Sectional 3 in Division 2.

Sun Prairie, Waunakee and DeForest lead the way among area teams in the Large Division of the state rankings, while Lodi was ranked fifth in the Medium Division and Marshall ninth in the Small Division.

Get ready for Week 4 action with previews of Madison La Follette at Middleton (Big Eight Conference), Portage vs. Mount Horeb/Barneveld (Badger Small Conference) and others.

Jackson Trudgeon and quarterbacks Joe Hartlieb and Mason Folkers lead the undefeated Crusaders' football team to a 35-7 victory over Jefferson.

Six of the seven in-state Wisconsin recruits advanced to Level 2 of the WIAA playoffs. Check out their stats and highlights.

Monroe's J.T. Seagreaves was recruited by the Badgers to play tight end.