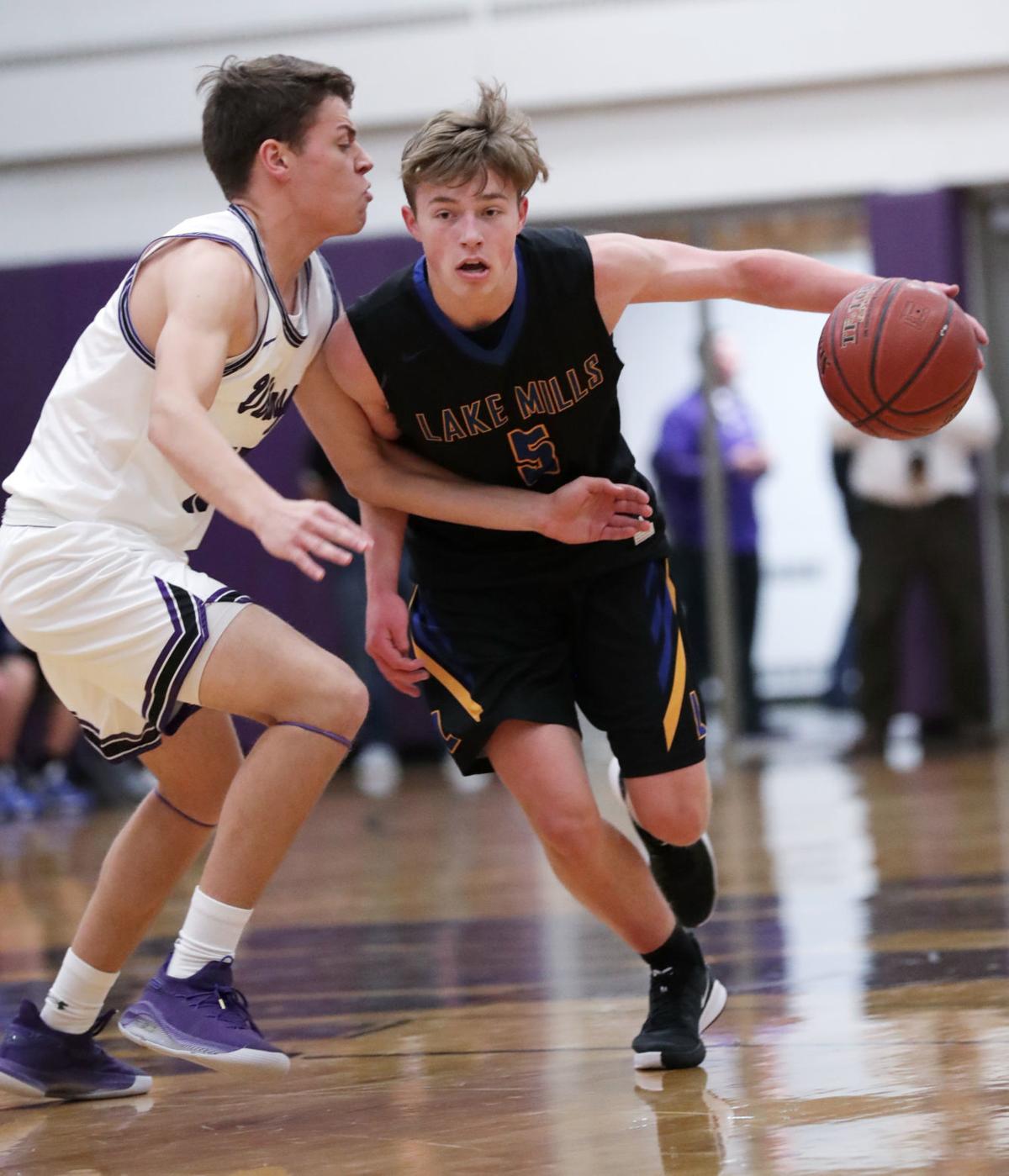 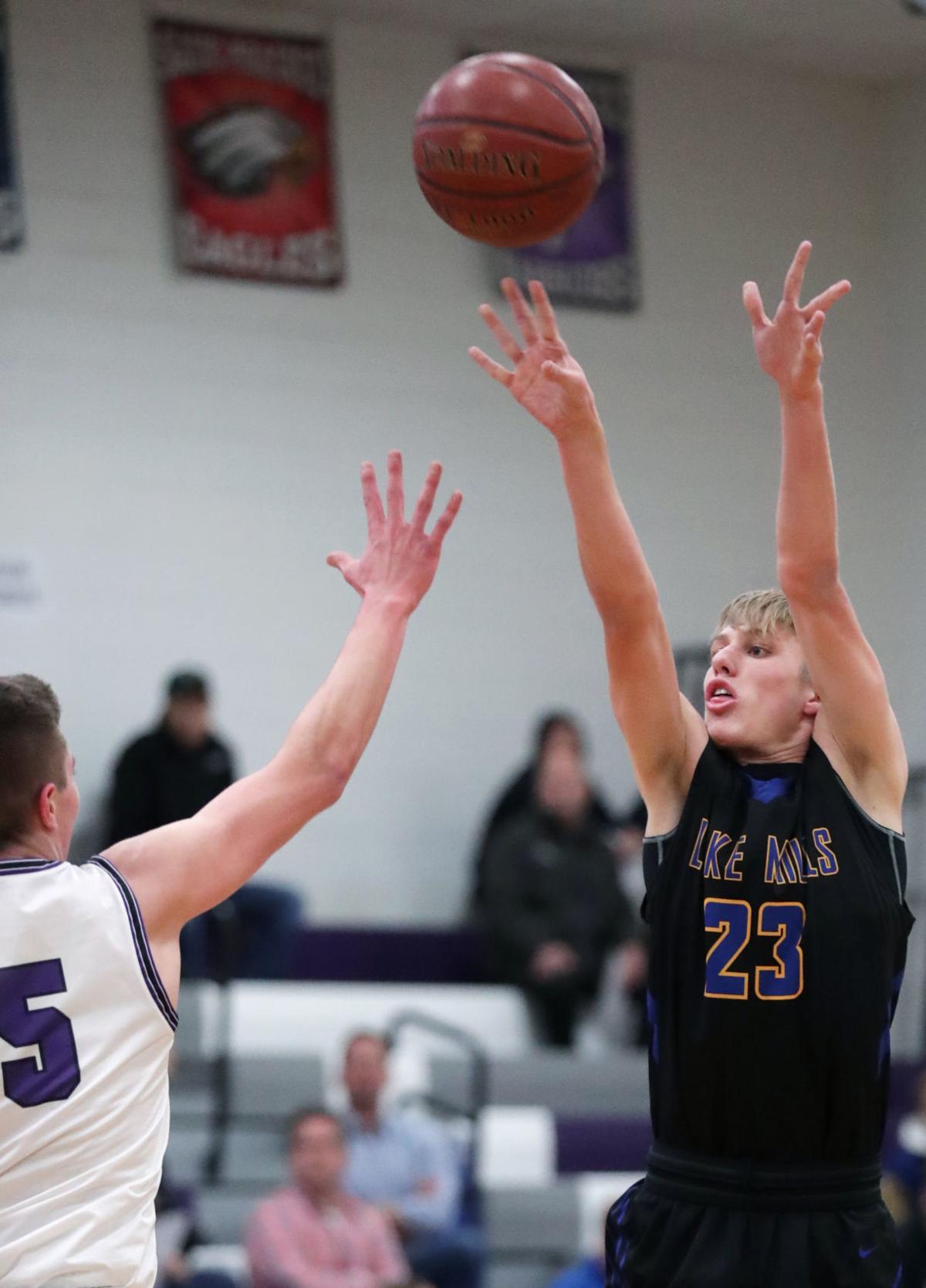 Lake Mills junior Charlie Bender shoots over Stoughton's Adam Hobson in the first half of a boys basketball game Nov. 26 at Stoughton. Bender leads the L-Cats in scoring (15.4 points per game).

LAKE MILLS — Fast-paced styles and a combined record of 28-3 have made the state-ranked Lake Mills boys and girls basketball teams must-see viewing for L-Cats’ backers this season.

That’s often led to full houses at home for both teams, as they each strive to finish atop the Capitol North Conference and make their mark in the postseason.

Meanwhile, the conference-leading and junior-laden L-Cats’ girls team (16-1, 5-0), No. 3 in Division 3 in The Associated Press state rankings, has battled through injuries and continued its dramatic rise under third-year coach Brandon Siska.

The local fans have taken notice of the team, which has four players scoring in double figures — juniors Julianna Wagner (14.2 points per game), Vivian Guerrero (11.9), Taylor Roughen (11.1) and Jade Pitta (10.2).

“It’s a fun community,” said Wagner, a guard. “We all support each other. It has changed a lot. I remember going to (girls) games and there was no student section and the bleachers wouldn’t be full.”

Siska — who took over a team that had won two games in 2016-17, including none in conference play — said he believed the youthful L-Cats could develop into a special group when he first saw the players in the gym.

They won five games in his first season and 17 last season when Lodi and Lake Mills, with a roster of sophomores and freshmen, tied for the Capitol North crown. It was Lake Mills’ first league title in girls basketball, Siska said.

“Every one of them has gotten better,” Siska said, adding: “It starts in the offseason. They work their tails off in the offseason. … They are all in the gym all the time and they are seeing the fruits of their labor.”

Prep notes: Deerfield's Dave Borgrud plans to step down as boys basketball coach after the season

That labor includes considerable time spent in the weight room and on the court, working on their shooting and skills.

Lake Mills, which hasn’t advanced to state in girls basketball, features multi-sport athletes. For instance, Wagner also competes in tennis and soccer, while Roughen is a pitcher, shortstop and third baseman in softball.

Said the 5-6 Roughen: “We’ve gotten really close over the years as a team. We do a lot of things together and that has helped a lot.”

The L-Cats are coming off a 76-55 victory over Lodi on Tuesday night. Wagner had 22 points and five assists, 6-1 center Guerrero totaled 20 points and nine rebounds, 5-8 forward Pitta added 13 points and Roughen contributed 11 points.

“The team chemistry is outstanding and something that started happening last season,” Siska said. “We are a complete team. We can shoot it. We can run the floor. We handle the ball well. We have seven kids who can shoot the 3 well. … With our size (including Guerrero, 6-2 junior Kayla Will and 5-10 sophomore McClain Mahone), we can play some different lineups. We are a tough matchup for most teams.”

The experienced Lake Mills boys team also has four players scoring in double digits in a system fitting today’s game and one the program uses starting in youth basketball.

“That has made it real easy to blend classes together, which you usually have to do at a small school,” Hicklin said. “With that continuity in the youth program, they hit the floor running. It’s not hard to get these guys to buy into playing fast and shooting 3s.”

“Since I was a freshman, we all talked about this year,” the 6-3 Bender said. “Mike and I started as the bench mob — the sixth and seventh men coming off the bench, my freshman year and his sophomore year. It’s been fun to develop over the years.”

Herrington and Johnson have played basketball together since fourth grade, after Johnson moved to the area from Virginia. They are captains this season.

“I was a little nervous (after moving),” Johnson said. “Sports gave me an opportunity to make a lot of friends and a lot of relationships here. I feel like (Herrington) knows where I am at all times on the court. He’s always firing darts at me.”

Johnson said his experience as a freshman on Lake Mills’ state semifinalist showed him how hard a team needs to work.

“I try to bring that mentality to practice and games,” Johnson said.

The L-Cats, who trail Columbus and Lodi by one game in league play, had their 12-game winning streak snapped by Columbus on Friday night.

“It humbled us a little bit,” Herrington said.

Said Hicklin: “You learn from it and keep it in perspective.”

The L-Cats will try to keep learning, understanding the difficult path ahead in conference and postseason play.

Said Hicklin: “The Capitol North is our No. 1 goal — to win conference and go from there. We all know how difficult our regional will be and how good we need to be. That is the standard and the bar we are trying to get to — to be as good as those teams and to go deep in the tournament. That is the journey we are on.”

It is a journey supported by the Lake Mills community.

“You go on bigger runs when the crowd is loud,” Herrington said.

Said Bender: “The way the season has gone so far, we feel like anybody on our schedule right now, we can play with them.”

Hortonville takes over No. 1 spot in Division 2, as Beaver Dam drops to No. 2. DeForest is third-ranked. Lake Mills stands third and Marshall sixth in Division 3.

Stoughton stands fifth and DeForest ninth in Division 2 in the weekly state rankings.

Ceniti, a first-team Big Eight Conference quarterback, helped lead the Spartans to the conference title and the WIAA Division 1 semifinals. He plans to attend UW-Whitewater.

The Cardinals finish third in the eight-team Green Division.

Lake Mills junior Charlie Bender shoots over Stoughton's Adam Hobson in the first half of a boys basketball game Nov. 26 at Stoughton. Bender leads the L-Cats in scoring (15.4 points per game).