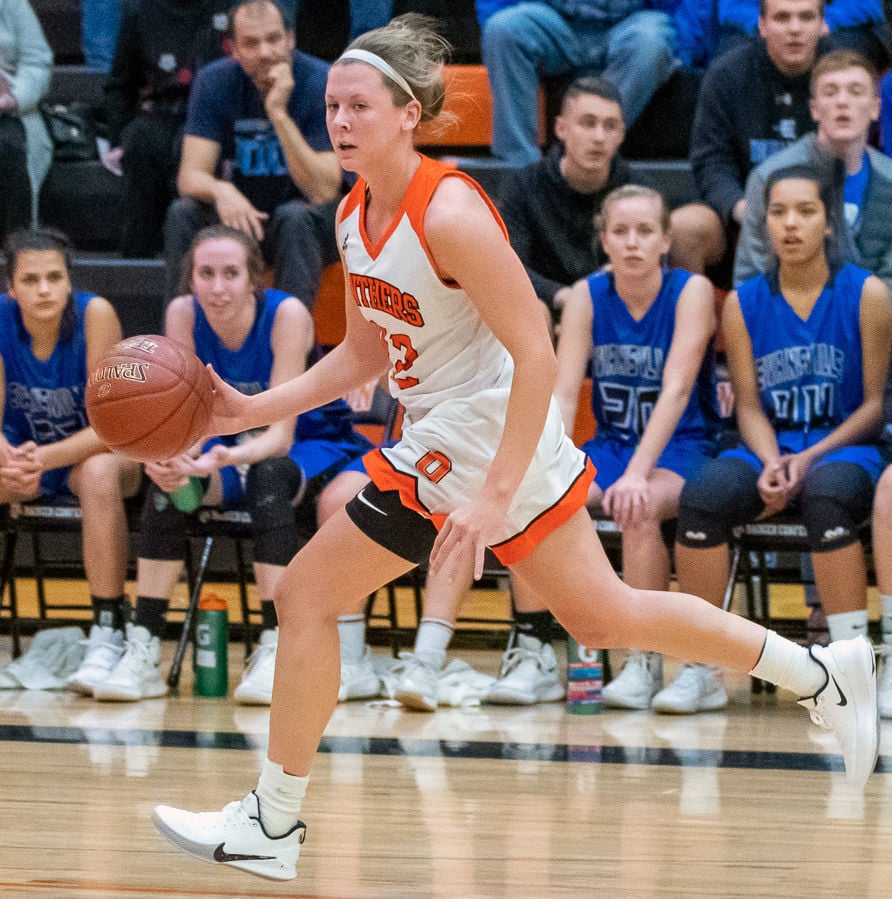 Oregon's Liz Uhl drives during the season opener against Evansville. The senior guard averages a team-leading 15 points per game. 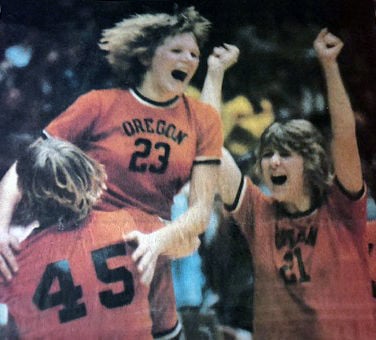 Lisa (Anderson) Stone celebrates with her Oregon teammates during the 1979-80 season. Stone went on to play at Iowa and have a college coaching career, including eight years at UW. She now coaches at Saint Louis University, 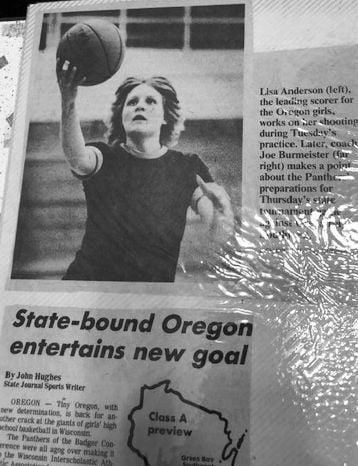 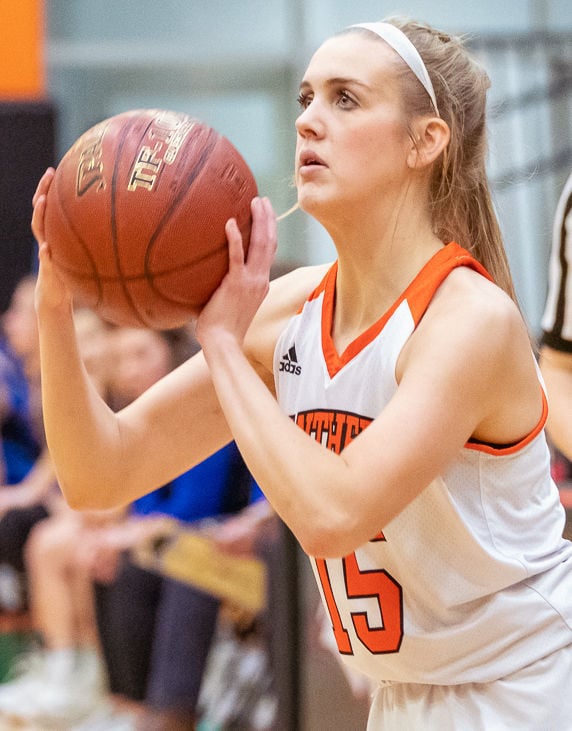 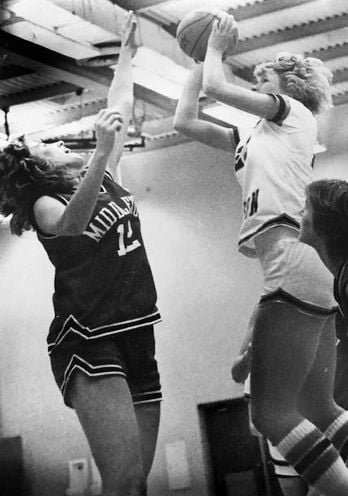 Lisa (Anderson) Stone shoots against Middleton during Oregon's run to consecutive state tournaments in 1979 and 1980. 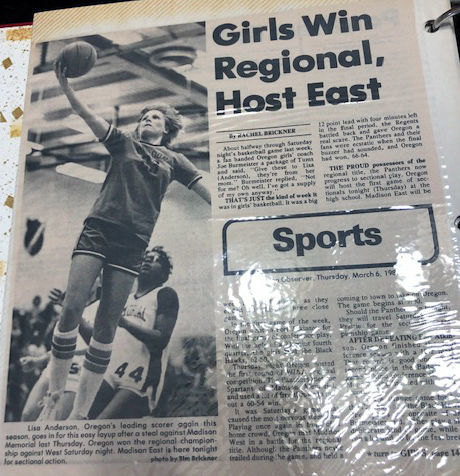 A newspaper clipping shows Lisa (Anderson) Stone of Oregon going up for a layup in a 1980 WIAA regional victory.

Lisa Stone had been following the Oregon girls basketball team’s progress from afar, with the help of friends and family.

When the texts, calls and messages starting pouring in last weekend, Stone knew the news had to be big. And it was: The Panthers were returning to the WIAA state tournament for the first time since 1980.

Stone immediately flashed back to her days in Oregon — where her parents, Malcolm and Karen Anderson, still live, in the same house Lisa (Anderson) Stone called home beginning at age 4 and where she met her husband, childhood sweetheart Ed Stone.

“It’s a great community, with wonderful people,” she said.

She also vividly recalled the Panthers’ only other state girls basketball appearances in 1979 and 1980.

“Those are memories that last forever,” Stone said.

The 5-foot-8 All-State selection — wearing short shorts, high socks and her orange Chuck Taylors — was a high-scoring guard who led Oregon to those two state tournament trips at the University of Wisconsin Field House, with its fan-shaped backboards and no 3-point lines.

“The Field House, that was your dream,” said Stone, the Saint Louis University women’s basketball coach who also coached at the University of Wisconsin for eight seasons, Drake University, UW-Eau Claire and Cornell College. “That was the game you wanted to get to.”

Forty years later, the goal was the same.Prior to this season, ending the season at the Resch Center in Ashwaubenon was the Oregon girls basketball team’s target.

After a last-second loss to DeForest in a regional semifinal last season, Oregon set its sights this season on winning the Badger South Conference, regional and sectional titles and a trip to the WIAA Division 2 state tournament. The Panthers decided that it was “Our time.”

“We talked about it as a team going into the offseason workouts that if we want it, we have to put in the work early, and we did,” Oregon senior Liz Uhl said this week prior to a practice at the high school. “And here we are now.”

Yes, here they are, preparing for a Division 2 semifinal. Fourth-seeded Oregon (21-5), the Badger South champion, will meet top-seeded and top-ranked Hortonville (25-1) at 1:35 p.m. Friday at the Resch Center.

“It has been a lot of emotions,” said Oregon coach Adam Wamsley, who has been receiving numerous congratulatory texts and emails, many from people he doesn’t even know. “Obviously, the cheers, the tears, everything in between. It’s been amazing.”

The Panthers advanced by defeating DeForest 57-46 in a sectional semifinal at Madison Edgewood and Waukesha West 51-46 in the sectional final at Janesville Craig, the school where Uhl was earmarked to attend prior to moving from Janesville to Oregon five years ago.

“It’s unreal,” said the 5-8 Uhl, an Illinois-Springfield commit who’s Oregon’s leading scorer. “It is kind of sinking in for me. I am ecstatic and I know everyone else on the team is ecstatic. I can’t even put a word to it. It is indescribable. It is a dream come true.”

Making the rush to the Resch

Seniors Kaitlyn Schrimpf and Izzie Peterson — Uhl’s teammates and fellow captains — had gone together with their fathers to the state tournament since the girls were sixth-graders.

“For the past five or six years, I’ve been seeing it from the crowd’s perspective and now I will be on the court, which is super cool,” said the 5-10 Schrimpf, a Winona State (Minnesota) commit and Oregon’s second-leading scorer.

“It is crazy, knowing we will be playing there,” said 5-6 guard Peterson, who’s committed to Clarke University in Dubuque, Iowa. “It was something we talked about before the season, but we didn’t want to look too far in advance. But knowing that this is the moment now, that it is happening, is a crazy feeling.”

Wamsley saw the promise when he took over as coach three years ago, when Uhl, Schrimpf and Peterson were sophomore starters.

He knew how hard the group worked last offseason and believed a state run was possible. Wamsley, asked by his coaches to be a defensive stopper when he played, emphasized tough defense and a balanced offense — led by the guards and the inside work of 5-8 junior Megan Bloyer, persevering despite a shoulder injury.

“You could tell they were motivated, especially my senior group,” Wamsley said. “They recalled last season, losing to DeForest in the regional semis on a last-second bucket. They were motivated to go further and really make a run at it. So, it’s been a special year. I have a great group of kids. Team chemistry has been great, and we are really excited about this opportunity.”

It is an opportunity that was earned.

“You have to be impressed with what Oregon has done this year,” said Beaver Dam coach Tim Chase, whose three-time defending champion Golden Beavers play Pewaukee in the other Division 2 semifinal Friday.

In Oregon’s second meeting with Beaver Dam this season, the Panthers fell behind early and suffered a 59-45 loss in the Badger Challenge first-place game. But they outscored the Golden Beavers 31-28 in the second half.

“After that, we could tell we could compete with any team,” Schrimpf said.

“We talked a lot about, in the second half of the season, if we just play how we play and focus on what we do best, rather than who we are playing, we’ll be just fine,” Peterson said. “And the amount of heart and passion we have on this team is what has been carrying us through these games.”

The first visits to state

She scored 20 points, Donna Freitag had 16 points and Jill Rowe added 12, but Oregon dropped a 73-58 decision to Greendale in a Class A quarterfinal, according to the WIAA box score.

The point guard recalled hopping on post player Freitag’s shoulders for her chance to snip the net and acknowledged she liked to shoot, taking 26 shots against Greendale.

“I was a gunner,” she said, laughing.

The next year, the Panthers weren’t satisfied with just being there.

“We didn’t have a lot of plays; we just played,” said Stone, who went on to play at Iowa.

Oregon defeated Green Bay Southwest 62-47 in a state quarterfinal in 1980. Stone scored 31 points, finishing 12-for-25 from the field and 7-for-9 from the free throw line.

She had 22 points and Rowe 10, but Oregon ran into Kathi Bennett and eventual champion Stevens Point in the semifinal, losing 51-40.

The 37-year-old Wamsley and his players, including 18-year-olds Uhl, Schrimpf and Peterson, weren’t alive the first time Oregon made it to state and don’t know much about those teams.

But they do appreciate all the support the Oregon community has demonstrated.

“The support from the community has been overwhelming,” Uhl said.

Said Wamsley: “I can’t wait to see the amount of people getting up to Green Bay Friday. It will be something special — the first time in 40 years. I think everyone is feeling it and excited.”

Stone, whose parents still attend some Oregon games, has obligations with her team Friday. But she said she might try to travel to the Resch Center if the Panthers reach Saturday’s final.

“I’ll be rooting for the Panthers,” she said, adding: “I’m really proud of them. It’s too bad it took 40 years, but you have to remember that you need to embrace every moment.”

Uhl plans to do just that.

“I’m just super-excited for the experience, with the team, knowing these are going to be the last one or two games of our high school career,” Uhl said. “I just want to take it all in. I don’t think there is a better way to end it than being at the Resch Center.”

Seniors Liz Uhl and Kaitlyn Schrimpf each score 17 points in a 57-46 victory in a WIAA Division 2 sectional semifinal.

Top-ranked Middleton, which finished as runner-up last season, will meet Oconomowoc in a Division 1 semifinal Friday night at the Resch Center in Ashwaubenon.

No. 1 seedings go to Middleton in Division 1, Hortonville in D2, Platteville in D3, La Crosse Aquinas in D4 and Black Hawk in D5

Spencer was Memorial's coach for 14 years and led the Spartans to the WIAA state semifinals in 2015.

Donarski, a 5-foot-10 senior point guard, averaged 24.2 points, 4.5 rebounds, 6.9 assists and 5.5 steals per game for the Blugolds. She is an Iowa State University commit.

Henert, who will start July 1, will replace retiring athletic director Mike McHugh. At Madison West and Madison La Follette, the application period has closed and virtual interviews will be next in the job search for athletic directors at those schools.

DeForest seniors Maggie Trautsch and Megan Mickelson also were among those on the first team.

Jelinek, a senior forward, is a unanimous selection on the first team. The other first-team forwards are Waunakee's Isaac Nett and Beaver Dam's Ben Cremers.

Illinois-Springfield commit Uhl is the player of the year in the Badger South Conference.

Hobson, Milton's Jack Campion and Monroe's Carson Leuzinger were unanimous choices on the first team in the Badger South Conference.

The WIAA Board of Control's decisions came in response to concerns about and the efforts to prevent and control the spread of the COVID-19 coronavirus.

Erin Howard, who had played two collegiate seasons, is among multiple players who have left the Auburn program. Howard was the Big Eight Conference player of the year as a senior at Madison East.

Blue is a 6-foot-3 freshman guard who is touted in the Class of 2023 for boys basketball.

The WIAA says the most efficient way to contact its workers during this time is by email.

Oregon's Liz Uhl drives during the season opener against Evansville. The senior guard averages a team-leading 15 points per game.

Lisa (Anderson) Stone celebrates with her Oregon teammates during the 1979-80 season. Stone went on to play at Iowa and have a college coaching career, including eight years at UW. She now coaches at Saint Louis University,

Lisa (Anderson) Stone shoots against Middleton during Oregon's run to consecutive state tournaments in 1979 and 1980.

A newspaper clipping shows Lisa (Anderson) Stone of Oregon going up for a layup in a 1980 WIAA regional victory. 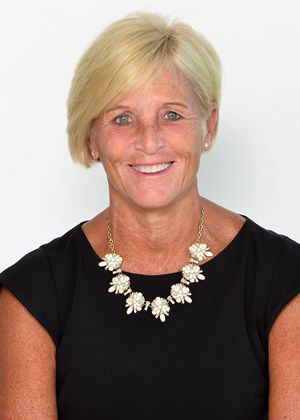