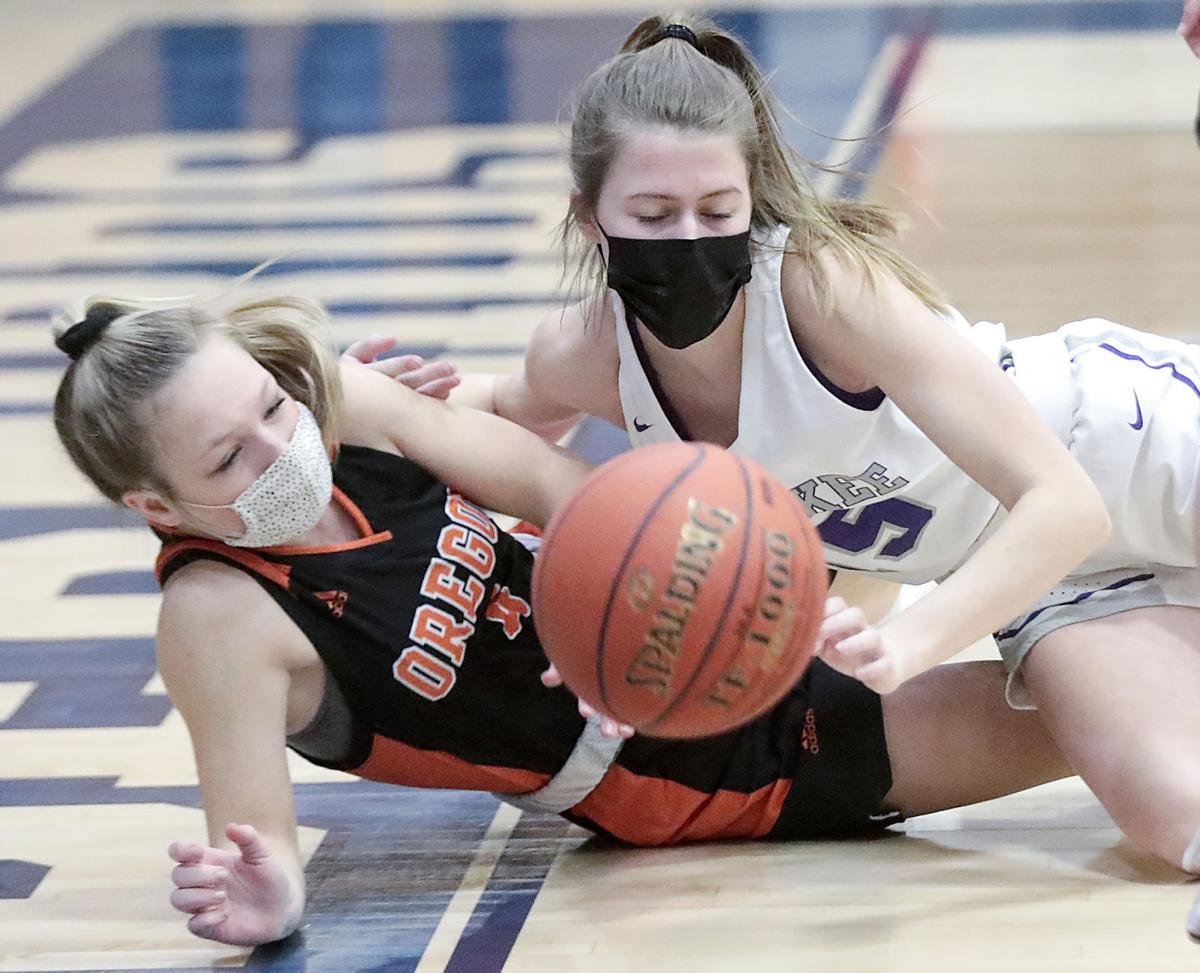 Oregon's Maggie Rosemeyer and Waunakee's Lauren Statz compete for a loose ball during the first half Friday night. 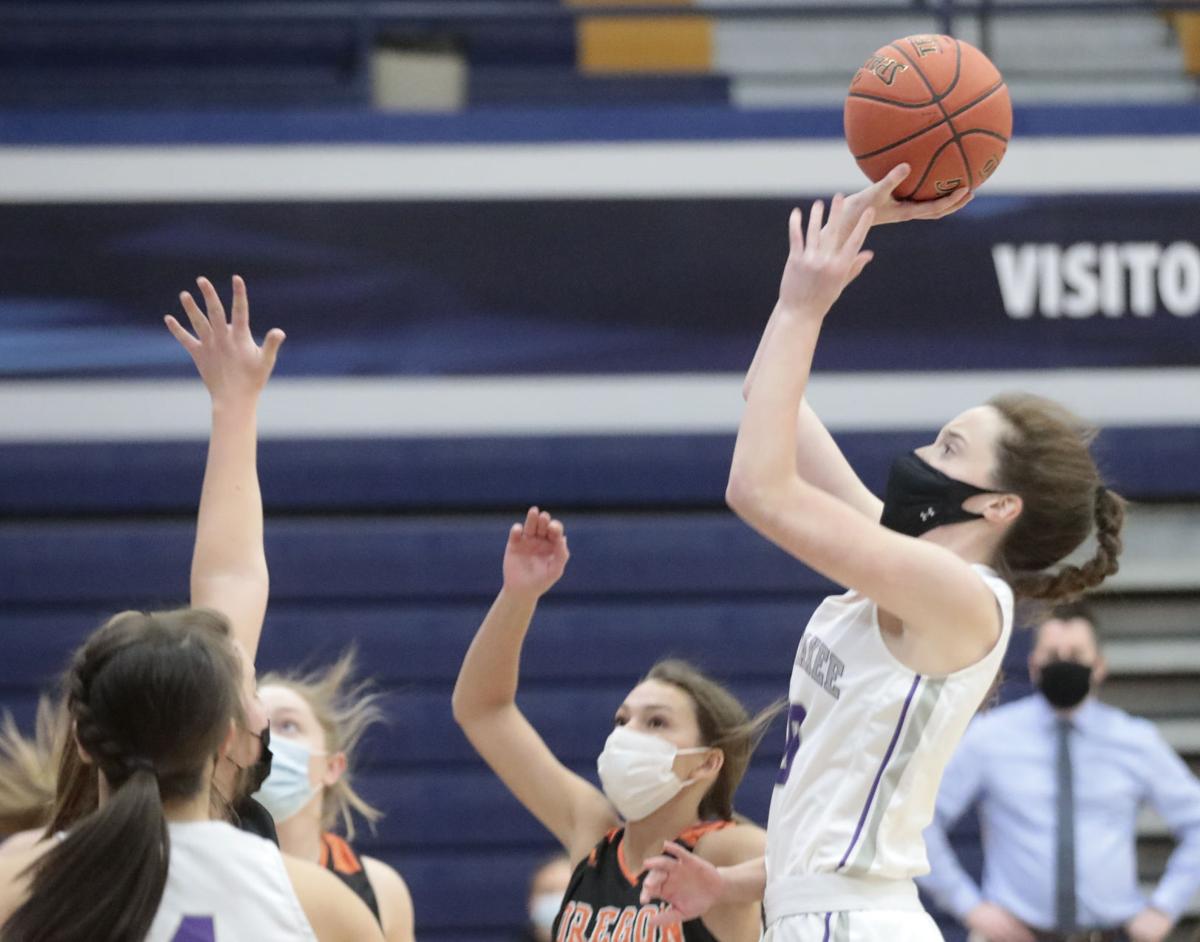 Waunakee's Kailee Meeker shoots over the Oregon defense in the first half.

BARABOO — Each time the Oregon girls basketball team charged back, Waunakee senior guard Kailee Meeker and her teammates had an answer Friday night.

The 5-foot-10 Meeker made four 3-pointers and scored a career-high 26 points as top-seeded Waunakee held off fourth-seeded Oregon 55-46 in a WIAA Division 1 regional semifinal at Baraboo High School.

“I just do whatever it takes to help my team,” said Meeker, who entered averaging 12.9 points per game. “Tonight it was just enough to win. … It was the playoffs — win or go home. We just believe in one another — that we are going to make the right play.”

“We knew that if we went on a run, we knew Oregon wasn’t going to go away,” Warriors coach Marcus Richter said. “We knew it was going to be a battle. Kailee has done that a lot for us this year. She doesn’t always have big scoring outbursts, but it seems every time we need a basket, she’s ready to step up.”

Junior Payton Lang made four 3-pointers and scored a team-high 14 points for Oregon (7-3), which had its seven-game winning streak snapped.

Senior guard Carleigh Roberts added 13 points and senior Emily Statz had 10 points for Oregon, which qualified for the Division 2 state tournament for the first time in 40 years last year but then was crestfallen when the tournament was canceled the night before the Panthers’ game due to the COVID-19 pandemic.

“This was the greatest bunch of girls that you could ask for,” said Oregon coach Adam Wamsley, whose team trailed by 13 early in the second half but fought back. “This whole season, they had a never-give-up attitude. (Trailing by) 13 or 10, it didn’t matter. I didn’t look at it as a big deficit because they gave it their all.”

Waunakee outscored Oregon 11-3 down the stretch after Statz’s inside basket pulled the Panthers within 44-43 with 4 minutes, 29 seconds remaining.

“Oregon has a very, very good basketball team,” Richter said. “This isn’t your normal opening night for when you get the No. 1 seed. … We knew it was going to be a dogfight. I’m proud of the way the kids battled down the stretch.”

Meeker, who has committed to UW-La Crosse for basketball, then made a 3-point shot from the right wing, giving Waunakee a 47-43 lead with 3:23 left.

Oregon senior Jaelyn Nedelcoff drained a 3-pointer from the left wing, pulling the Panthers within 49-46 with 1:26 remaining.

Oregon had a chance to draw closer, but Lang’s shot underneath was blocked with 24 seconds left by Waunakee 6-2 junior forward Ashley Sawicki, who then was fouled.

Wamsley disagreed, believing there should have been a foul on the Panthers’ shot. That led to a technical foul with 21.6 seconds left.

Sawicki made one of two foul shots and Meeker connected on the two technical foul free throws, increasing Waunakee’s lead to 52-46.

“It looked like a close play,” Wamsley said. “I thought I argued, I guess, as normal. I must have argued too long. I let my team down. That’s on me. … That should never happen, and it won’t happen again.”

Senior guard Ebba Harrison, who had nine points, and Meeker hit 3-pointers to cap a 9-0 run to begin the second half — increasing the Warriors’ lead to 31-18 with 16:10 left to play. Oregon rallied within 35-32 on Lang’s 3-pointer, but Meeker answered with a turnaround jumper in the lane.

Statz’s basket brought the Panthers within three. But Meeker scored twice on drives into the lane, building Waunakee’s lead to 41-34.

“(Meeker) was tough to handle,” Wamsley said. “She got too low. We wanted to keep her out of the paint. Give her credit, she put the ball in the basket.”

Waunakee and Oregon had late starts to this season due to the COVID-19 pandemic and health and gathering orders from Public Health Madison & Dane County, which eventually led to both schools receiving permission from their school boards to play outside Dane County.

Senior Brooks Empey and sophomore Griffin Empey continue their family's love affair with wrestling and Stoughton's tradition in the sport.

Stitgen becomes the third diver to win four titles. Senke is first in the 100-yard butterfly and 100 backstroke and Baraboo senior Jacob Laux wins the 100 breaststroke.

Katie Hildebrandt and Teagan Mallegni team up to lead the charge.

Oregon's Maggie Rosemeyer and Waunakee's Lauren Statz compete for a loose ball during the first half Friday night.

Waunakee's Kailee Meeker shoots over the Oregon defense in the first half.