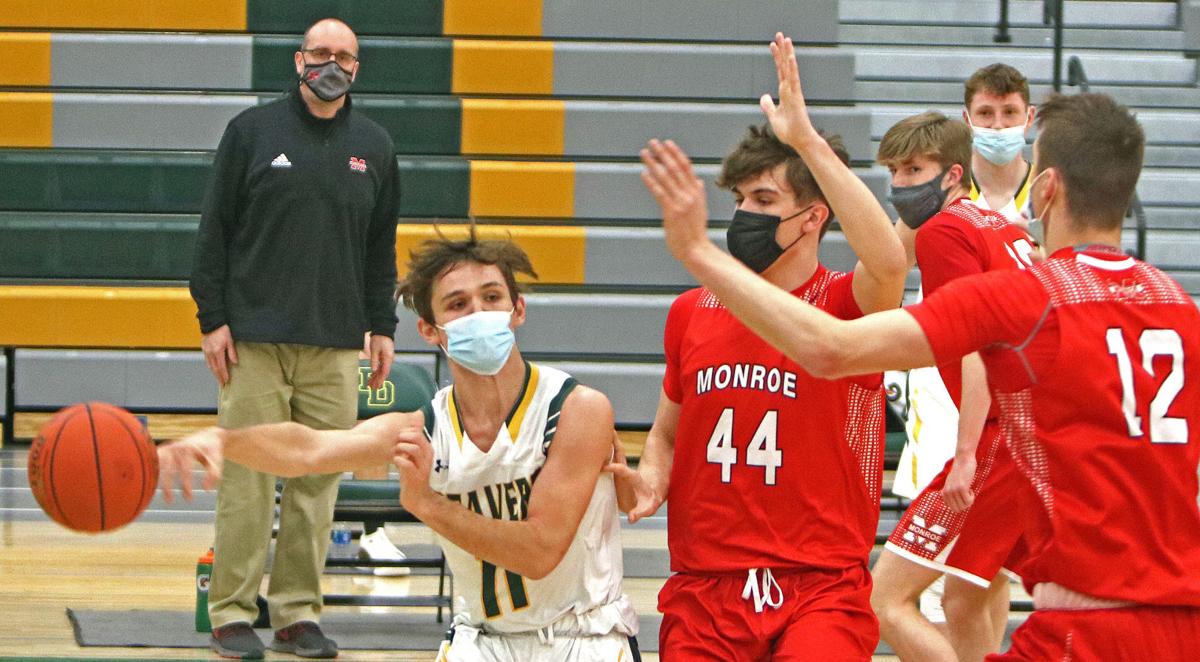 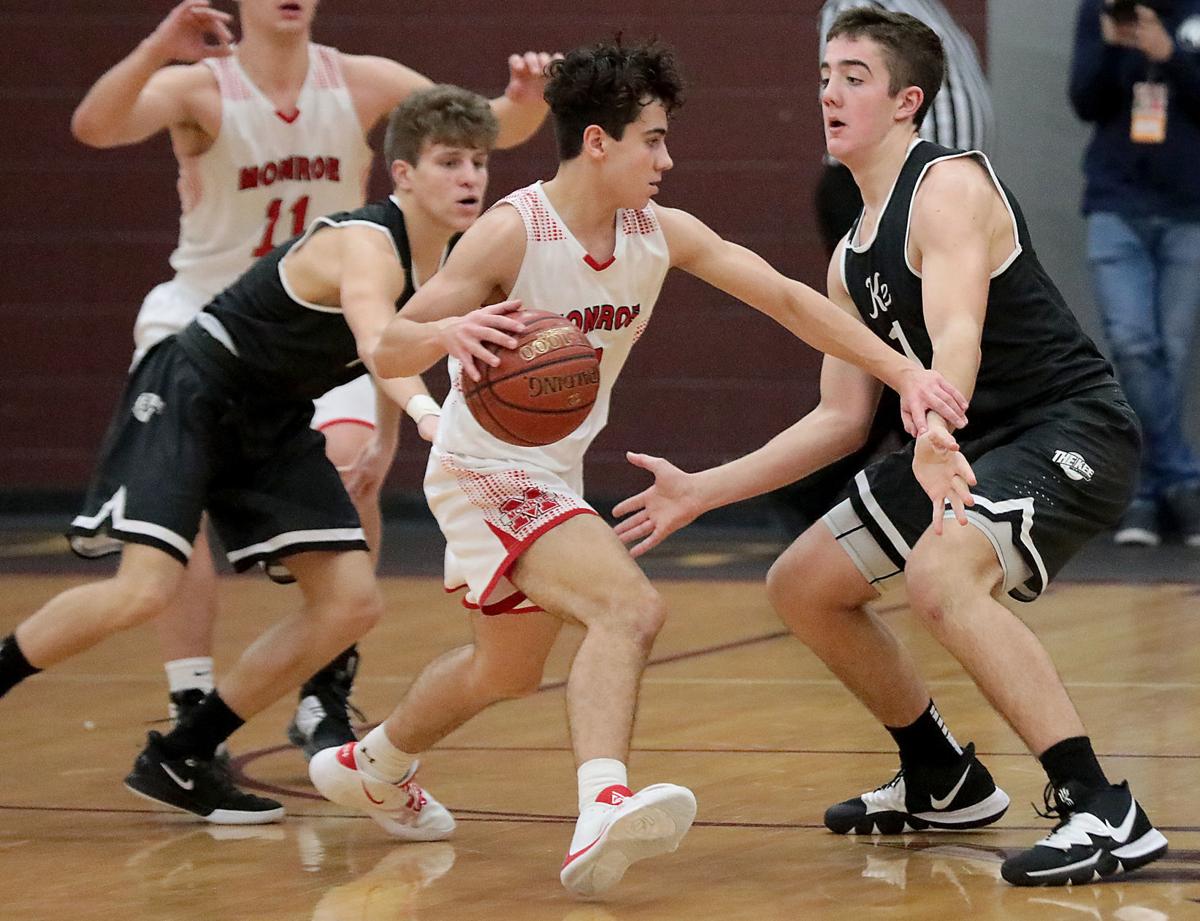 Monroe's Carson Leuzinger works between the defense of Waunakee's Jaxson Zibell, left, and Caden Nelson during the first half of the first-place matchup of the Badger Challenge on Saturday at Madison Edgewood. 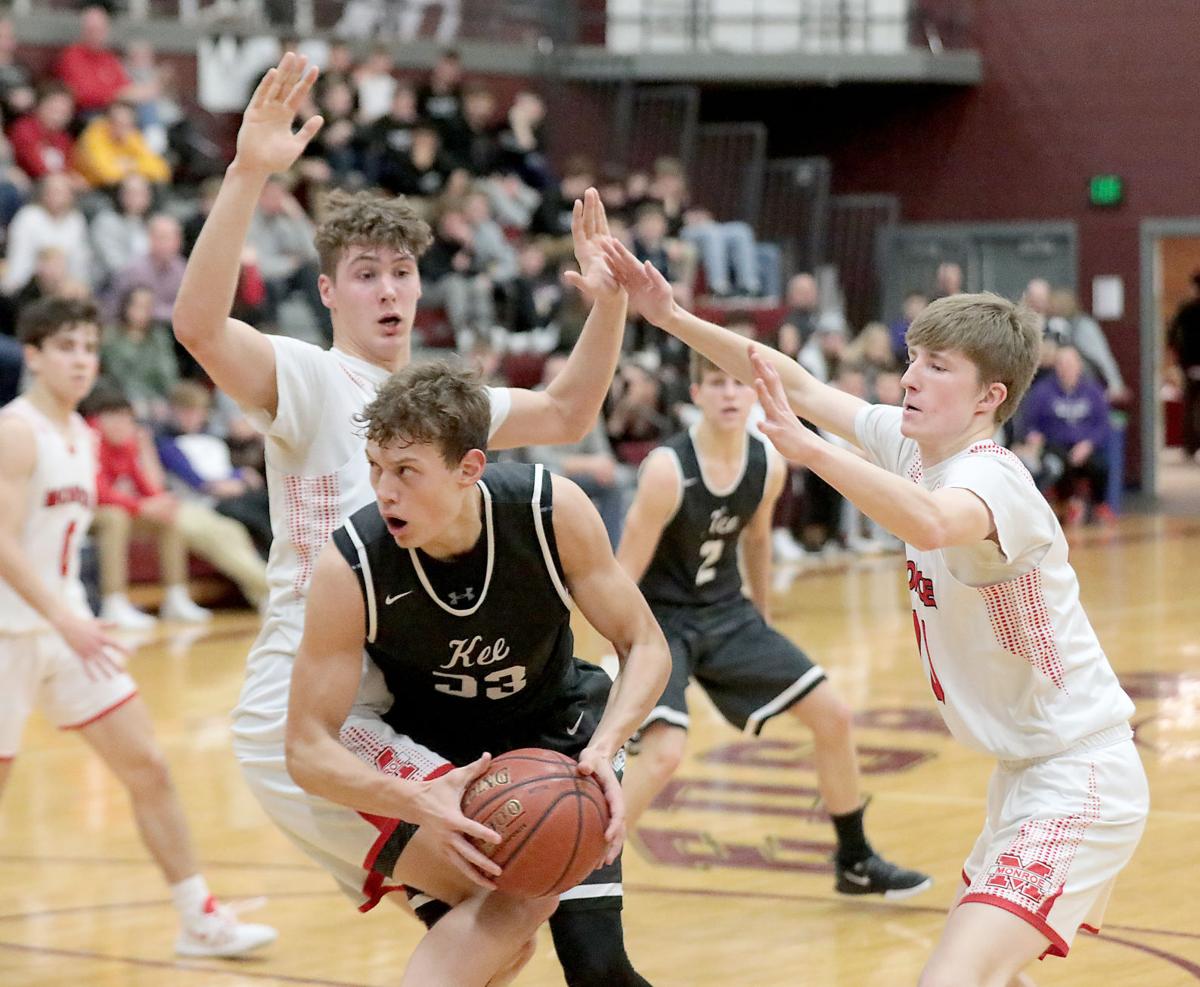 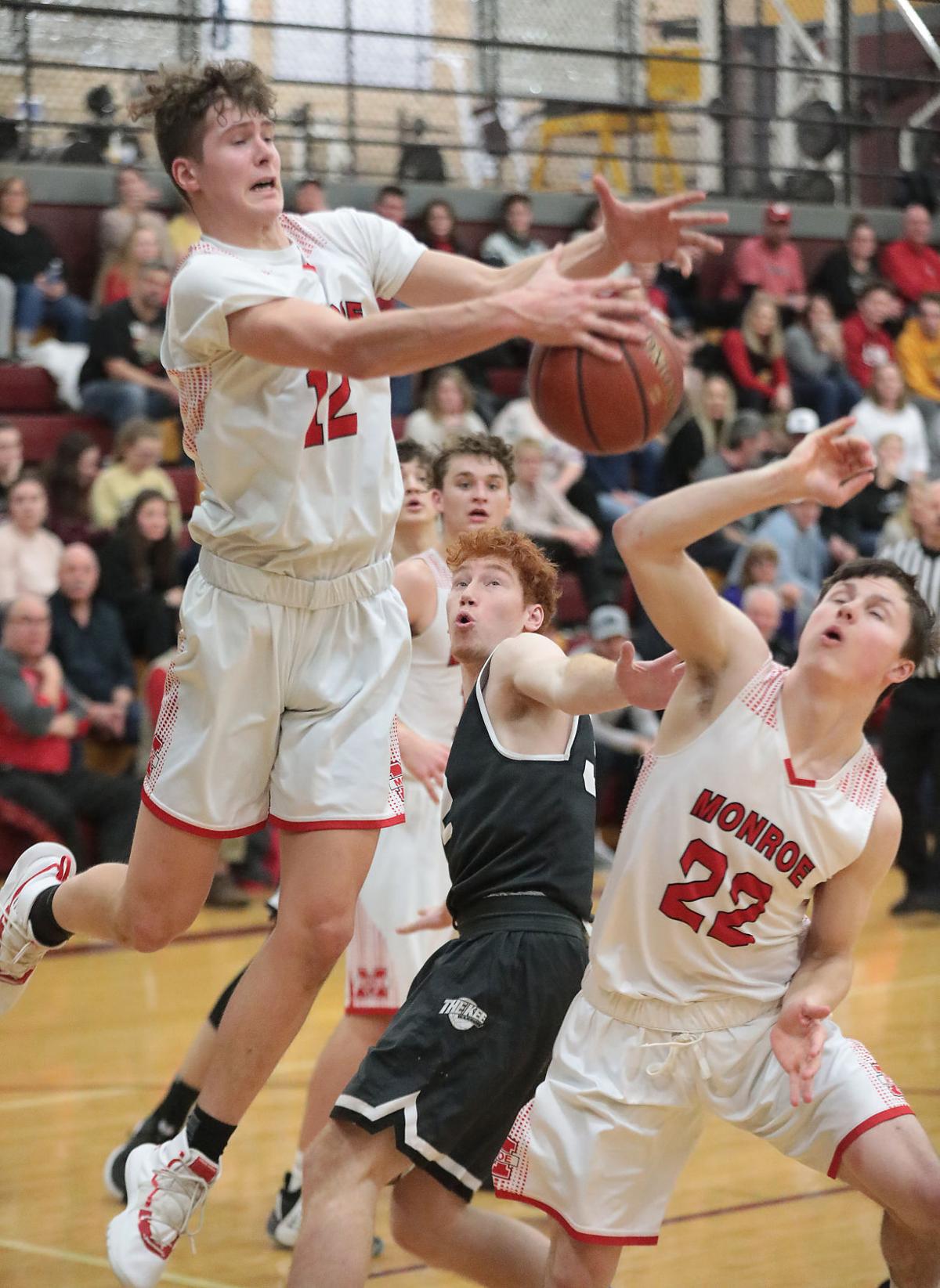 Monroe's Cade Meyer (12) and Tyler Matley (22) compete for a rebound with Waunakee's Randy Vojtisek (32) during the second half of Monroe's 70-68 first-place win over Waunakee in the Badger Challenge boys basketball tournament at Madison Edgewood in Madison, Wis. Saturday, Jan. 25, 2020. JOHN HART, STATE JOURNAL 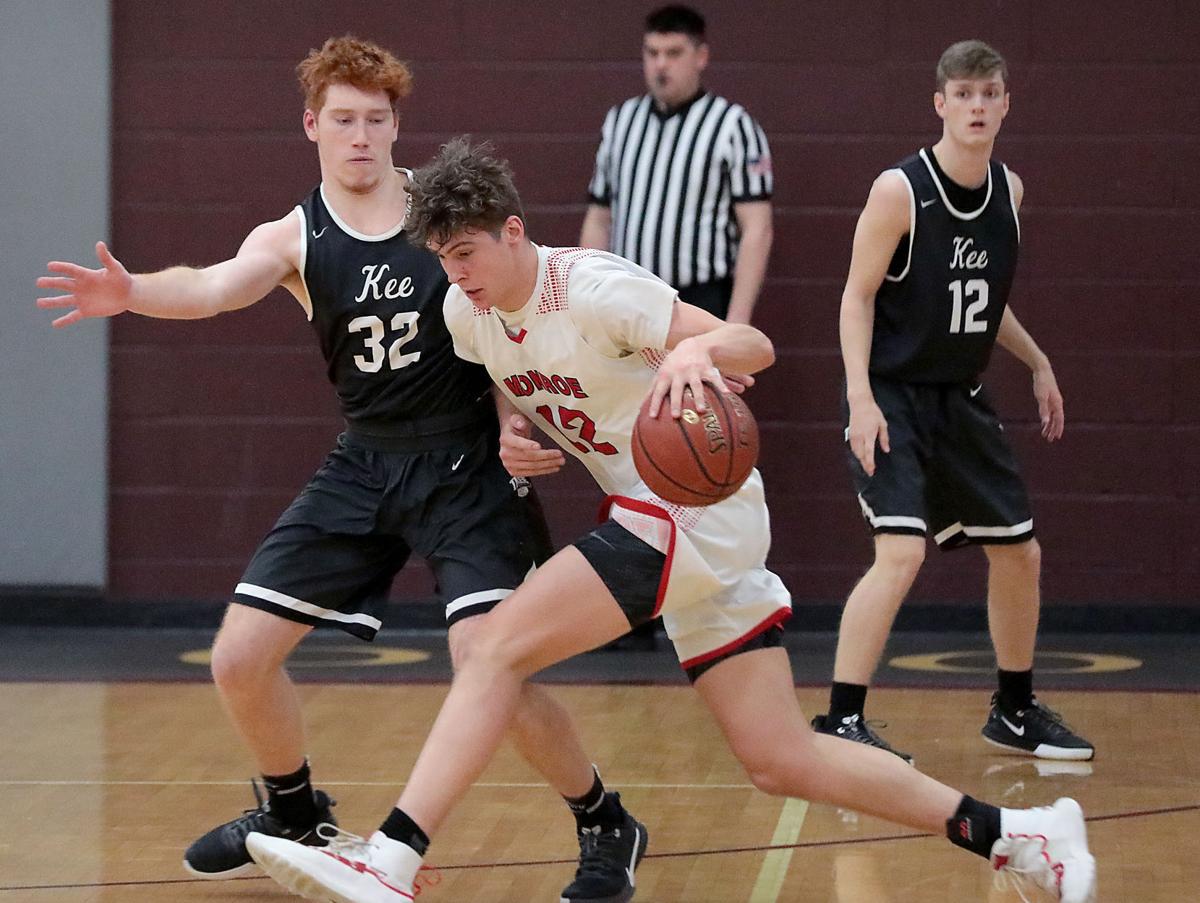 That fascination has resulted in a desire to study sports and business analytics in college, providing the background Golembiewski said he hopes will one day lead him to become the chief assistant to the general manager for a professional sports team.

However, right now, the 6-foot-3 Golembiewski is interested in only one set of numbers for an experienced Monroe boys basketball team, ranked fourth in Division 2 in this week’s final Associated Press poll.

“As long as we have more points than the other team,” he said.

Monroe is part of a difficult sectional, which includes three other teams ranked in the AP Division 2 top 10 — No. 7 Wisconsin Dells, No. 8 Lake Mills and No. 10 Edgerton, the top seed in the Cheesemakers’ grouping.

“It’s been a long ride and it’s been a ton of fun,” said Golembiewski, a four-year varsity player and three-year starter who’s a team captain with junior guard Carson Leuzinger. “We’ve got some good stuff going for us.”

Monroe — led by the scoring of UW-Green Bay commit Cade Meyer (20.6 points per game), junior forward J.T. Seagreaves (15.7) and Leuzinger (15.2) — has won eight consecutive games after its only loss to Janesville Parker.

“We are having a good season,” said the 6-0 Leuzinger, a first-team all-conference selection in the Badger South last season. “We finished the second half of the season strong. We are playing our best ball right now. We want to get after it and make a run.”

The Cheesemakers entered this season motivated after dropping a regional final to DeForest at home last year.

“They weren’t happy with the way the season ended last year,” Monroe coach Brian Bassett said. “They definitely had that extra drive and extra motivation.”

“Last year ended sooner than we were hoping,” said Golembiewski, whom Bassett called the team’s leader.

The Cheesemakers were permitted by their school district to begin this season in mid-December, playing a maximum of 15 regular-season games, in response to the COVID-19 pandemic.

“We were excited (for the season),” said Meyer, a 6-8 senior forward. “It definitely was different wearing masks. We had to get into better shape than most seasons. I’m trying to make (the experience) as normal as possible.”

The experience level of Golembiewski, Meyer, Leuzinger and Seagreaves — four players who have started games during the past three years — was a major factor considering the later start to the Cheesemakers’ season.

“To have all that experience back, it’s been huge,” said Bassett, whose team has five seniors.

Bassett has liked Monroe’s willingness to share the ball and its focus on improving defensively. The Cheesemakers, averaging 71.6 points per game, set a goal to keep opponents in the 50s and have succeeded, giving up 56.1 points per game.

Meyer and Seagreaves also have been playing off each other well inside and outside on the offensive end, Bassett said. Meyer, who was at Black Hawk as a freshman, said he believes that comes with maturity and learning how to play with each other. They were second-team all-conference selections last season.

Meyer said making his college choice was a relief and has aided his senior year.

“I could focus on the season and the task at hand,” Meyer said. “I feel like I’ve played as hard as I could this season and that’s all I could ask of myself. I think we’ve played well as a team.”

Leuzinger (6.1 assists per game) and Golembiewski (5.3 assists) give Bassett two point guards on the court.

“It helps the team,” Leuzinger said. “We can both play off each other. There’s not a set point guard. It’s hard to match up. You need to have two good perimeter defenders.”

Edgerton (20-4) received the top seed over Monroe in the regional seeding meeting, which upset Bassett, who tweeted “My dad always told me don’t poke the bear … (at) practice right now and the bear has been awakened.”

“I was upset that day because I wanted to get another home game,” Bassett said. “It didn’t work out. Edgerton has had an unbelievable season. You can’t take anything away from them. They earned it. They played a full slate of games. Hats off to them.”

Meyer realizes seeds don’t matter at this point, saying, “We’ve got to stay locked in and focused.”

Meyer and his teammates understand there are no guarantees of playing during COVID-19 or postseason.

“For us seniors, we know every game could be our last,” Meyer said. “We have to give it our all. We control what we can control right now. Anyone can be beaten at any moment.”

Golembiewski, who hopes to play football in college and is interested in Loras College and UW-Whitewater, believes the Cheesemakers are prepared for the upcoming challenge.

“We are working hard every day,” Golembiewski said. “We know what we’ve got to do. It’s a matter of us doing it. … We are taking it one game at a time. We will see how far we can push it.”

Madison West football coach Brad Murphy says if the Madison public schools don’t play a WIAA football season in the spring, he is organizing a club team for players from West, East, La Follette and Memorial.

Katie Hildebrandt and Teagan Mallegni team up to lead the charge.

Seymore plans to play women's basketball at Edgewood College. Brad Dement will be Beloit Memorial's football coach for the WIAA alternate fall season in the spring.

The Monroe boys basketball team stands one victory away from its first WIAA state tournament trip since 2009.

Max Weisbrod packed a whole season’s worth of huge plays into one half on Saturday afternoon.

Golembiewski was recruited as a quarterback and Matley as a running back.

The senior rushes for a career-best 206 yards on 16 carries and scores a career-high four rushing touchdowns.

DeForest's Craig Weisbrod and Lake Mills' Steve Hicklin are the All-Area coaches of the year after leading their teams to the WIAA state tournament.

Monroe's Carson Leuzinger works between the defense of Waunakee's Jaxson Zibell, left, and Caden Nelson during the first half of the first-place matchup of the Badger Challenge on Saturday at Madison Edgewood.

Monroe's Cade Meyer (12) and Tyler Matley (22) compete for a rebound with Waunakee's Randy Vojtisek (32) during the second half of Monroe's 70-68 first-place win over Waunakee in the Badger Challenge boys basketball tournament at Madison Edgewood in Madison, Wis. Saturday, Jan. 25, 2020. JOHN HART, STATE JOURNAL