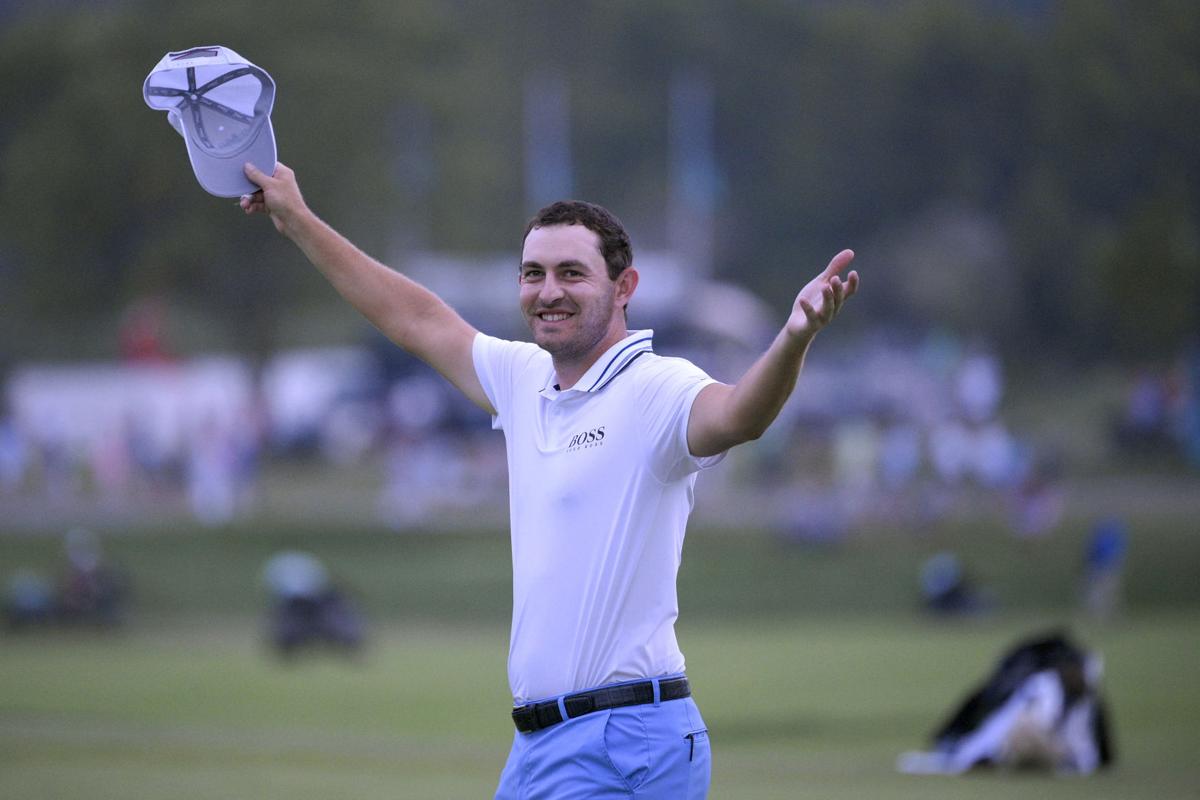 Patrick Cantlay reacts after sinking his putt on the 18th green, the sixth playoff hole at the BMW Championship on Sunday. 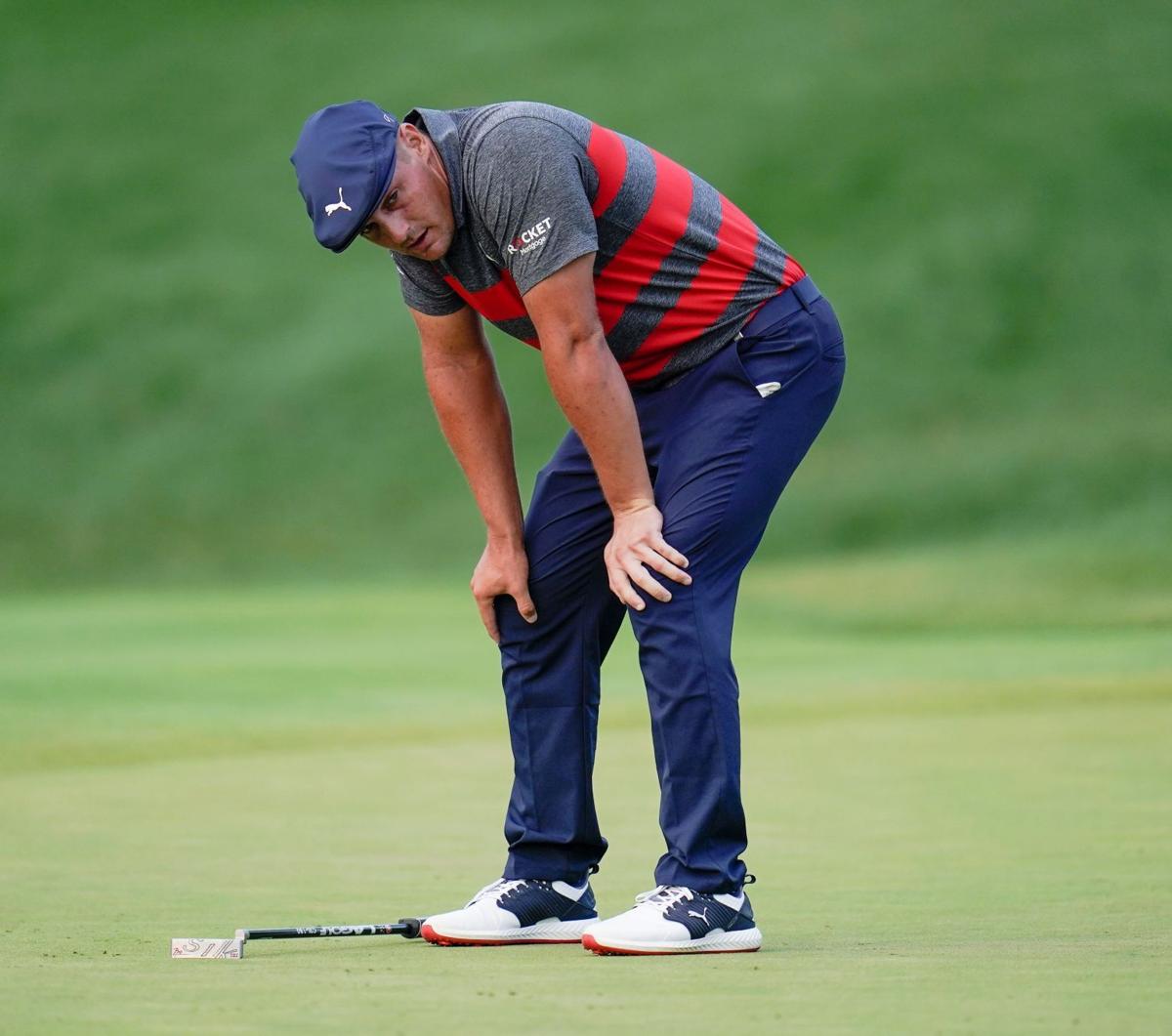 OWINGS MILLS, Md. — Patrick Cantlay had enough on his hands to keep his attention Sunday as he was locked in an epic battle with Bryson DeChambeau, a compelling contrast of styles and personalities Sunday in the BMW Championship.

Even so, he couldn’t ignore what fans shouted from behind the ropes Sunday at Caves Valley.

With the putter in his hand and ice in his veins, Cantlay delivered one clutch putt after another to survive the final three holes of regulation and six tense holes of a sudden-death playoff, finally winning with a 20-foot birdie putt on the 18th hole.

The most important putt? It was hard to tell.

He closed out his 6-under 66 with an 8-foot par putt on the 16th, an 8-foot bogey putt on the 17th after a tee shot into the water, and a 20-foot birdie on the 18th to force a playoff. Twice on the 18th in the playoff, where DeChambeau had a 30-yard advantage off the tee, Cantlay made par putts from 6 feet and 7 feet.

The most important putt was the last one.

“But they all mattered, I guess, the same,” Cantlay said. “I needed all of them.”

DeChambeau, who also closed with a 66, can pick just as many that cost him. His week featured a missed 6-footer on the 18th for a chance at 59 on Friday. And in the final round, he missed a 12-foot birdie to win in regulation, three more birdie putts in the playoff, and then his final putt to send the great theater into another amazing scene.

DeChambeau, who has stopped talking to any media that isn’t a PGA Tour partner, refused comment for everyone Sunday. He became the first player in PGA Tour history to post 261 without taking home a trophy.

Cantlay received two trophies — one from the the BMW Championship, the other from the century-old Western Golf Association — and plenty of other perks for his PGA Tour-leading third victory of the season and fifth overall.

He moved to No. 1 in the FedEx Cup, news he met by saying, “I know.” That means Cantlay goes to the Tour Championship next week with a two-shot lead over Tony Finau in the FedEx Cup finale with $15 million to the winner.

And he clinched the sixth and final automatic spot for the U.S. Ryder Cup team. Madison resident Steve Stricker has six captain’s picks, and there was no way he was going to leave “Patty Ice” off the team regardless of the outcome.

“That’s the first time I’ve heard it. But I got it all week,” Cantlay said about his nickname. “There was maybe one or two guys that followed me around all four days, and they just every hole were screaming it. These were some of the most supportive, loudest fans I’ve ever experienced.”

They were treated to an amazing show.

DeChambeau was smashing away, using his length to set up birdies. Cantlay never flinched, relying on a classic game with no apparent weakness. He laid up on par 5s he could reach if the risk wasn’t worth it, relying on his wedge and — of course — his putter.

The PGA Tour said it was the best statistical performance putting in a tournament since the “Strokes Gained” category became available in 2004.

DeChambeau had his moments. Driving into the stream down the left side of the 18th fairway on the fourth extra hole, he took a penalty drop and hammered wedge to 4 feet to save par.

He looked like a winner — again — with a wedge to 6 feet on the par-3 17th on the fifth playoff hole, only for Cantlay to coolly hit 8-iron to 2 feet.

As if the final round wasn’t entertaining enough, there were a few testy moments between the only two players who had a chance to win all day.

DeChambeau was rolling his eyes when Cantlay marked and studied 2-foot par putts on the front nine. Cantlay was walking up the 14th fairway as DeChambeau prepared to hit his approach when DeChambeau backed off and asked him to stop walking.

“We had just been told by the rules officials to kind of speed up, and I’m not always the fastest walker, so I was trying to get ahead and do my part,” Cantlay said. “No big deal.”

More problematic for DeChambeau was failing to make putts.

DeChambeau looked to be a winner long before he prematurely tipped his cap to the gallery walking up to the 18th green in regulation.

He holed a 12-foot birdie putt on the par-5 16th hole, striking a pose of head bowed with arm extended in a clenched fist. That gave him a one-shot lead, and Cantlay still faced an 8-foot par putt. He made that, a sign of what was to come.

Cantlay’s tee shot on the par-3 17th bounced short and to the right with just enough momentum to roll onto the rock framing the pond and drop into the water.

Tournament over? Not quite.

Cantlay hit a lob wedge from 100 yards in the drop area to 8 feet. DeChambeau hit a poor chip from the rough to 12 feet and two-putted for bogey, and Cantlay came up clutch again to make his putt and stay one shot behind.

“I got to thinking, ‘Let’s try and make 4 here and at least not take all the pressure off of him.’ We both had 4s on that hole, and that really kept me in the golf tournament, kind of switched the momentum a little bit,” Cantlay said. “It would have been almost insurmountable if I would have went down two going into 18.”

There was drama all over Caves Valley, even without a trophy at stake.

Erik van Rooyen and Sergio Garcia played their way into the top 30 who qualify for the Tour Championship. Patrick Reed managed to hang on to the 30th spot, but only after K.H. Lee made bogey on his final hole.

If healthy — Reed has been out with bilateral pneumonia — it at least gives him a chance for one last audition to be a captain’s pick for the Ryder Cup.

The message Steve Stricker wanted to impart when he took the job as Ryder Cup captain was for the American team to move forward. There has been no shortage of speed bumps along the way.

Two PGA Tour tournaments are left before the top six Americans earn a spot on the Ryder Cup team, and then Steve Stricker has six captain's picks a week later.

“There's been captains who did a good job and it doesn't equate to a win,” Steve Stricker said before laughing and adding, “It can be a thankless job.”

Patrick Cantlay reacts after sinking his putt on the 18th green, the sixth playoff hole at the BMW Championship on Sunday.