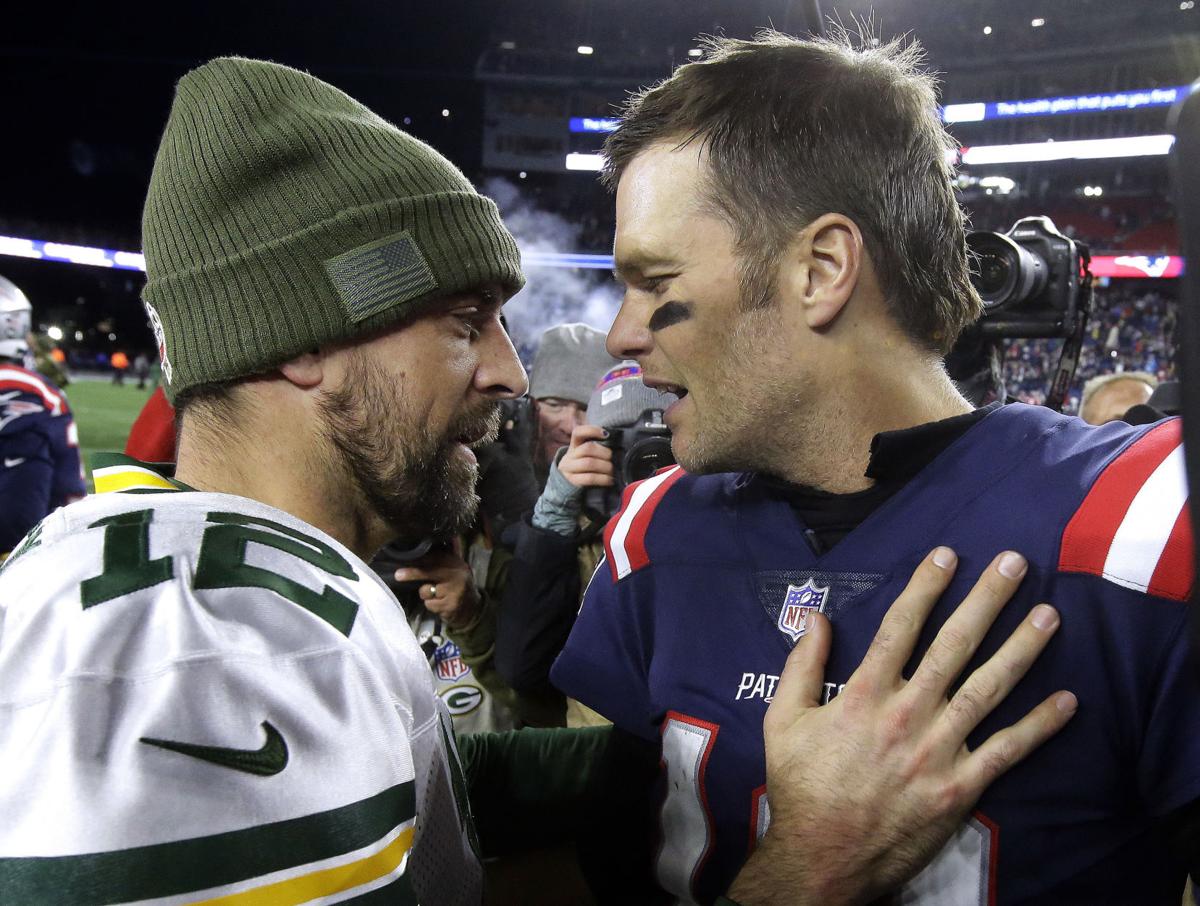 Aaron Rodgers and Tom Brady meet at midfield after the Packers played the Patriots on Nov. 4, 2018, in Foxborough, Mass. Brady passed for 294 yards and a touchdown in New England's 31-17 win. 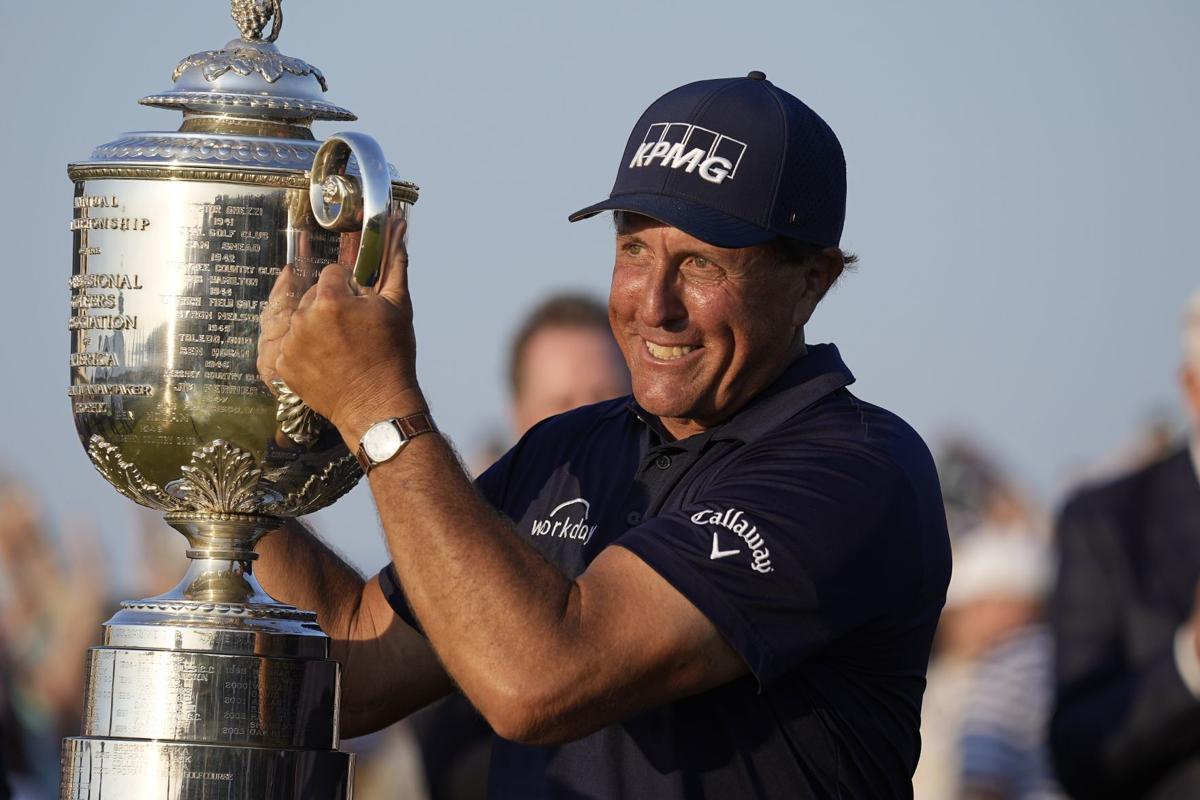 Phil Mickelson holds the Wanamaker Trophy after winning the PGA Championship on Sunday, May 23, 2021 on the Ocean Course in Kiawah Island, S.C. Mickelson, 50, became the oldest player to win a major. 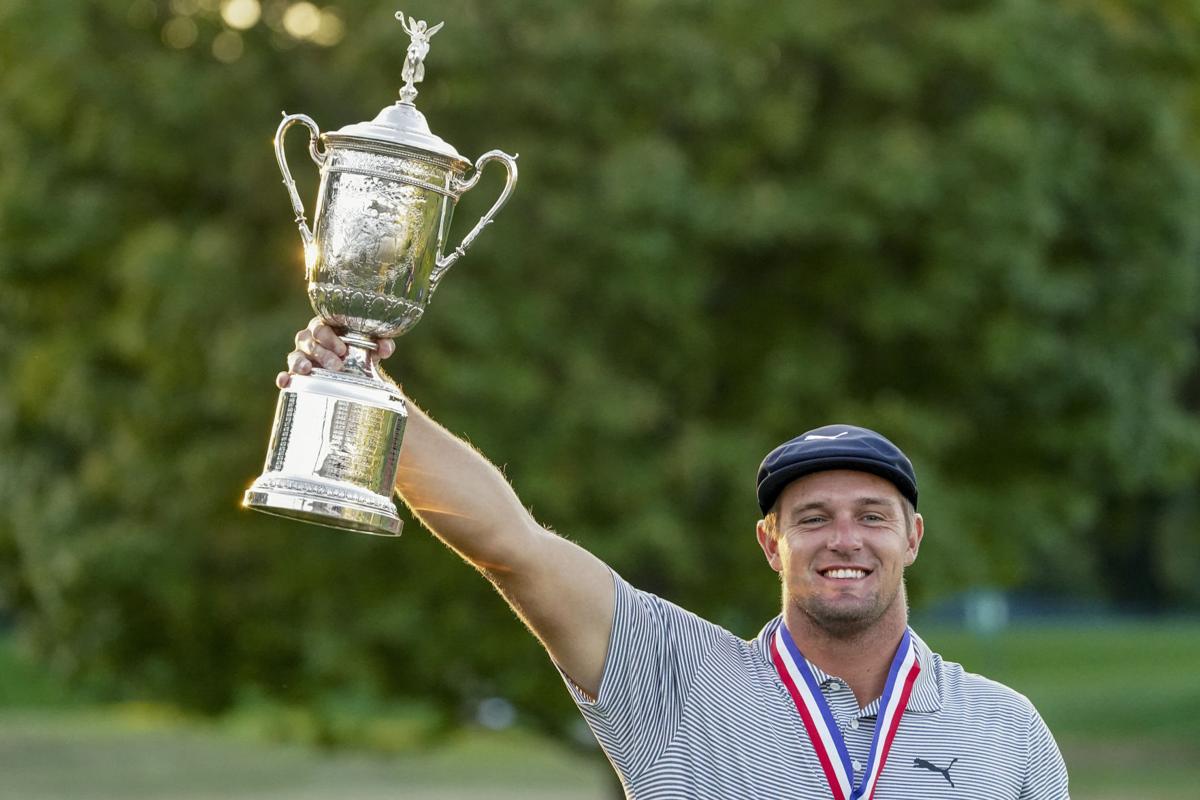 In this Sept. 20, 2020, file photo, Bryson DeChambeau holds up the winner's trophy after winning U.S. Open in Mamaroneck, N.Y.

HELENA, Mont. — The next edition of The Match will feature PGA stars Phil Mickelson and Bryson DeChambeau along with NFL quarterbacks Tom Brady and Aaron Rodgers.

Players will have open mics and will be able to talk with other players and the commentators during the modified alternate shot match play event, which will raise money for Feeding America and other charities.

Mickelson won the inaugural edition of The Match against Tiger Woods in Las Vegas in 2018.

Mickelson and Brady lost the second event to Tiger Woods and Peyton Manning in May 2020. But in November, Mickelson and former NBA star Charles Barkley upset three-time NBA champion Stephen Curry and Manning, who will be inducted into the Pro Football Hall of Fame in August.

Brady began rooting for Mickelson on Sunday when he chipped in from the bunker on the par-3 fifth hole during his PGA Championship win.

Mickelson responded by tweeting, "We have some unfinished business. Let's get another match and find a pair to give a beat down."

Brady wasted no time needling Rodgers about Tampa Bay's win over Green Bay in the NFC title game in January, in which the Packers opted for a field goal on fourth-and-goal while trailing by a touchdown.

Two old guys against the young bucks @PhilMickelson. @b_dechambeau better get used to laying up because we know @AaronRodgers12 isn’t going for it 🤣 https://t.co/f1DQsFn41U

Brady continued the attack on Rodgers and his partner, using a meme of Brooks Koepka's eye roll during an interview in the PGA Championship when DeChambeau walked by.

On Instagram and Twitter, Brady billed The Match as "two champions vs. a scientist and jeopardy host."

Since the championship game, Rodgers has indicated he wants to leave Green Bay and broke his silence on the issue Tuesday on ESPN.

Brady even saved a little ribbing for DeChambeau, who has become a controversial figure in golf after trying to murder every shot with maximum swing effort.

DeChambeau eventually chimed in, tweeting that he "can't wait to unleash the beast in Big Sky."

Excited to team up with @AaronRodgers12 for The Match and take on @PhilMickelson and @TomBrady. Can’t wait to unleash the beast in Big Sky. Get your popcorn ready, this is going to be epic🍿 pic.twitter.com/ptZ0RoheWf

DeChambeau also posted a tweet featuring a meme that referenced Deflategate, "you will feel just as deflated as those balls were in the AFC Championship game."

@TomBrady, once @AaronRodgers12 and I take down you and @PhilMickelson, you will feel just as deflated as those balls were in the AFC Championship game. pic.twitter.com/K3KobiDLya

Tom Oates: Rift between Aaron Rodgers and Packers was set in motion with pick of Jordan Love

There is only one draft pick that pushed Aaron Rodgers to the point where he requested a trade and it wasn't made this week. It happened last year when GM Brian Gutekunst traded up to select Utah QB Jordan Love.

Before he ever practiced with Tampa Bay, Tom Brady described almost exactly how the season would go in a conversation with Buccaneers general manager Jason Licht.

Brett Favre played against Tom Brady, sees some of himself in Patrick Mahomes, has been a long-time friend with Peyton Manning's family, and Aaron Rodgers is his successor in Green Bay.

Green Bay's second-year coach took the ball out of the hands of Aaron Rodgers, the NFL's presumptive MVP, and put his trust in a defense that hadn't consistently delivered all season.

The Packers’ gut-wrenching 31-26 loss to the Buccaneers at Lambeau Field had been over for less than an hour Sunday, and Aaron Rodgers was searching for words in the face of another NFC Championship Game disappointment.

Alex Cejka posted a 3-under 67 in the Senior PGA Championship on Thursday at Southern Hills Country Club in Tulsa, while Stricker also was 3 under but had only played seven holes when a line of storms halted play.

Mike Weir opened a four-stroke lead Friday in the Senior PGA Championship with a 5-under 65 on a tough Southern Hills layout, with Madison's Steve Stricker among three players tied for second.

Madison's Steve Stricker took advantage of Mike Weir’s back-nine collapse Saturday to take the lead into the final round of the Senior PGA Championship in Tulsa, Oklahoma.

Madison's Steve Stricker had a one-shot lead going into the final round, but he missed seven putts inside of 8 feet, and his ball-striking also was off, leading to a 77 that dropped into a tie for 11th.

Andy Levinson, the tour's senior vice president who has overseen its COVID-19 protocols, could not say whether Jon Rahm had been vaccinated, and Rahm didn't mention that in his statement.

Phil Mickelson holds the wrong kind of U.S. Open record with his six runner-up finishes, most recently in 2013 at Merion.

Aaron Rodgers and Tom Brady meet at midfield after the Packers played the Patriots on Nov. 4, 2018, in Foxborough, Mass. Brady passed for 294 yards and a touchdown in New England's 31-17 win.

Phil Mickelson holds the Wanamaker Trophy after winning the PGA Championship on Sunday, May 23, 2021 on the Ocean Course in Kiawah Island, S.C. Mickelson, 50, became the oldest player to win a major.

In this Sept. 20, 2020, file photo, Bryson DeChambeau holds up the winner's trophy after winning U.S. Open in Mamaroneck, N.Y.