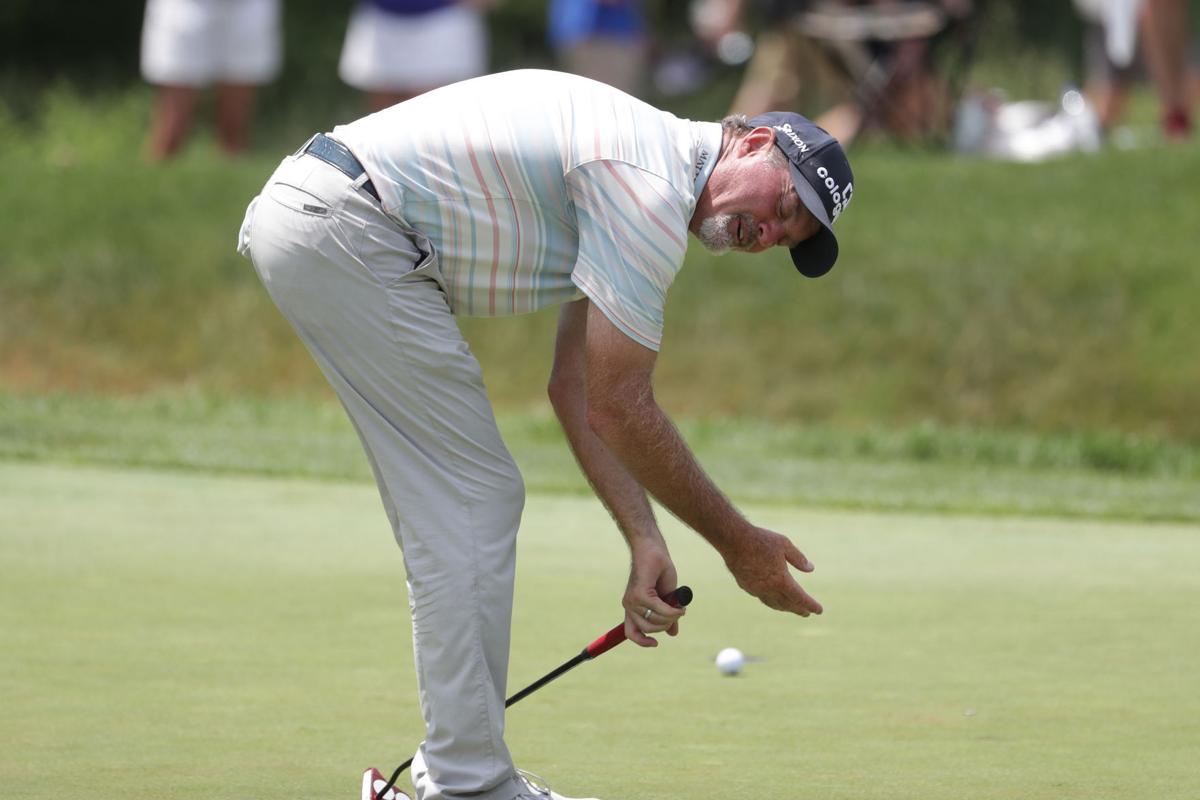 Jerry Kelly reacts with disgust after leaving a putt short on No. 14 during the first round of the American Family Insurance Championship on Friday at University Ridge. 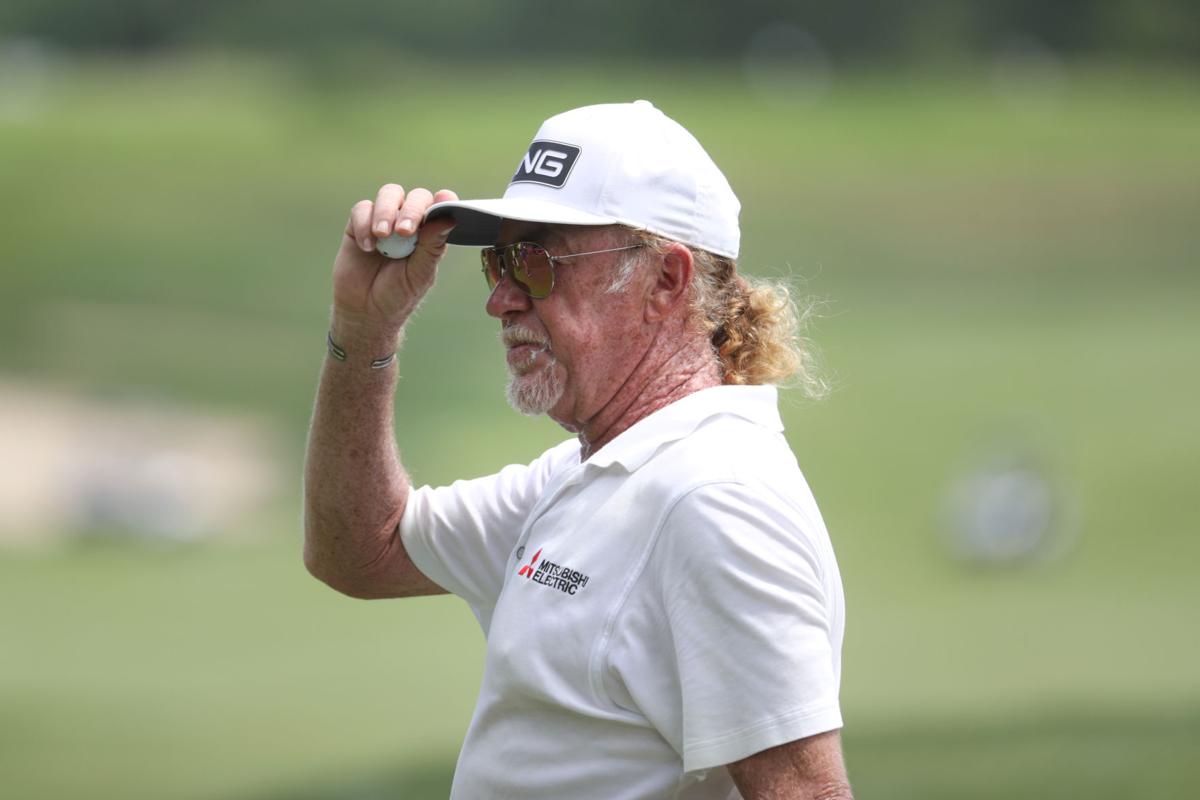 Miguel Angel Jimenez tips his cap to the crowd as he finishes the first round at 7-under 65, two strokes ahead of Jerry Kelly. 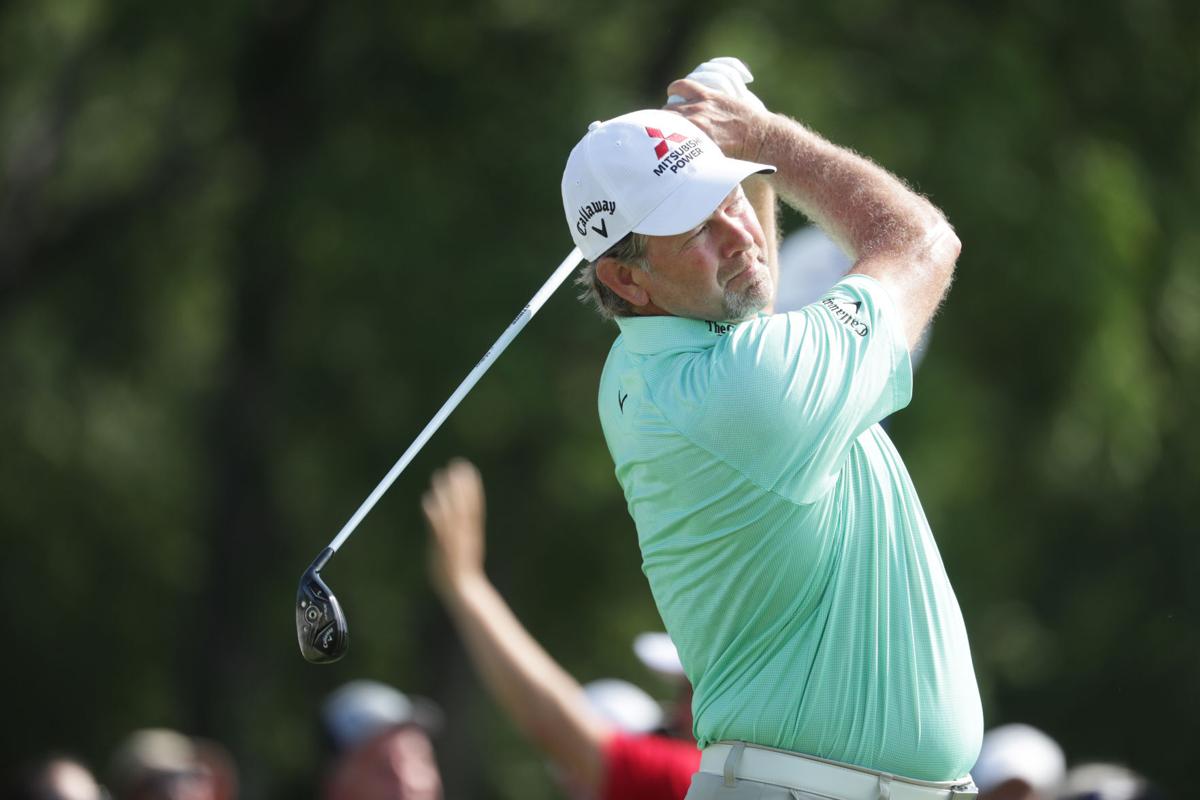 Retief Goosen eagled No. 16 and had four birdies in joining five others at 4-under 68. 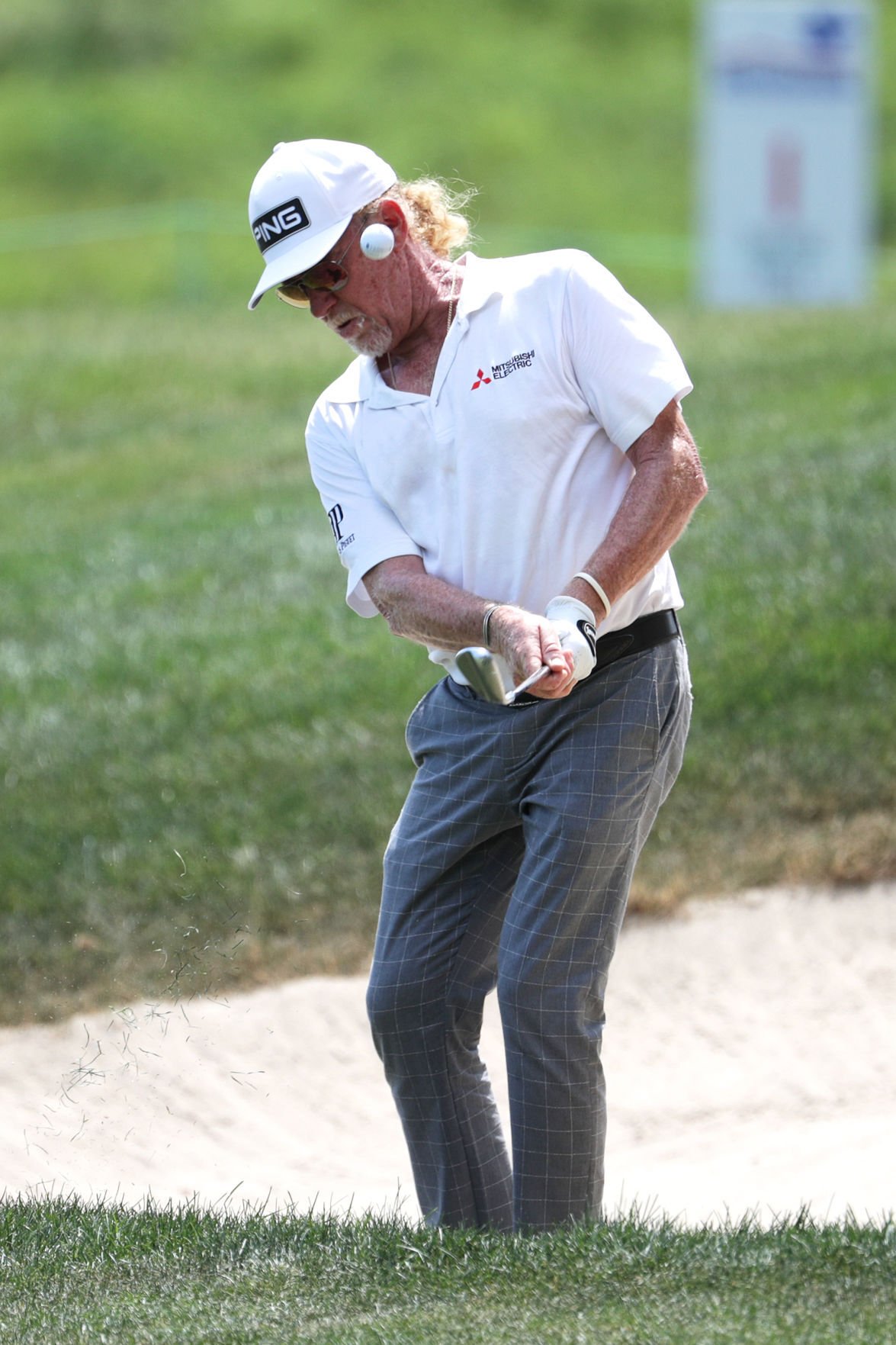 Miguel Angel Jiménez brought a secret weapon with him to Madison this weekend.

The custom Italian-leather golf spikes he wore during the first round of the American Family Insurance Championship on Friday did more than help him get around University Ridge Golf Course.

“Handmade, full-leather shoes, proper shoes,” Jiménez said, proudly showing off his footwear. “Not the plastic thing you wear there, I don’t know. You are connecting to the world with your feet, you have to put the best thing: Leather.”

After his performance, it’s hard to argue Jiménez is wrong.

Jiménez shot a 7-under-par 65 to take the lead, pulling away from the field with an eagle down the stretch. His eagle on the par-5 second hole was his second of the day, and he also tallied four birdies and one bogey.

“I hit a massive drive there with a little down-breeze there. I had 135 meters to the hole and I hit a wedge there and I just put (it) like 2 feet to the hole for an eagle,” Jiménez said. “That helps you, that gives you wings, you know? Like the eagle has wings.”

The Spaniard started his round on the back nine, but caught fire on the front, carding birdies on the seventh and eighth holes, and just missing another on the ninth.

Jiménez’s late flurry broke a tie with Madison native Jerry Kelly for the lead, and Kelly sits two strokes back after a bogey-free round. Kelly was a bit frustrated with the strokes he left on the course.

His eagle at the second hole was fueled by a firm approach with a utility 3-iron that left him with a medium-distance putt. But after a birdie putt at No. 9 — with one of the larger gallery contingents on the course watching — circled almost the entirety of the cup without falling in, he was visibly annoyed.

“I was hitting some quality putts and they were just missing,” Kelly said. “That was just my normal, ‘C’mon,’ you know? You’re kind of stuck in neutral, let’s go. I was in good spirits, I knew I was playing well enough, but I hadn’t showed it yet. That was just normal me.”

Kelly almost sank a long-distance chip at 18, and the audience in the skyboxes groaned as the ball rolled 2 feet past.

Jiménez and Kelly sit atop six players, including World Golf Hall of Famers, at 4-under. The tight leaderboard sets up a hotly-contested tournament this weekend. Jiménez said he saw Kelly was neck-and-neck with him down the stretch, but he wasn’t motivated by the threat of the local fan favorite.

Fred Couples tallied seven birdies and three bogeys for a 4-under. Couples, who won the AmFam in 2017, had one of the luckier bounces of the day when his ball hit a spectator on the shoulder and kicked out on the fairway.

“Yeah, I thought the golf course is absolutely perfect. We were first off, the greens were beautiful. I hit the ball very, very well, and then a little scrappy on a couple holes,” Couples said. “This is just a very special event and I try not to miss it for the world, and the best thing about it is I like the course and I play well, so it’s kind of a home run for me.”

Retief Goosen salvaged an inconsistent round with an eagle on 16 and a birdie on 18 to get to 4-under, and Jim Furyk — who’s making his debut at the tournament this weekend — went bogey-free en route to 4-under.

Colin Montgomerie and Ken Tanigawa had to finish their rounds after a nearly two-hour rain delay, but they’re also in the mix at 4-under.

Tournament player-host Steve Stricker sits at 2-under, but said the entire field knows the 36 holes remaining are plenty to make up ground.

“We’ve got two more days and anything can happen out here,” he said.

Watch now: John Daly tees off on the 10th hole at AmFam

John Daly ripped a drive more than 300 yards on his first shot at the 2021 AmFam Championship, but he withdrew later in the day after feeling ill.

Watch now: Jerry Kelly almost holes out a chip on the 18th at the AmFam

Jerry Kelly reacts with disgust after leaving a putt short on No. 14 during the first round of the American Family Insurance Championship on Friday at University Ridge.

Miguel Angel Jimenez tips his cap to the crowd as he finishes the first round at 7-under 65, two strokes ahead of Jerry Kelly.

Retief Goosen eagled No. 16 and had four birdies in joining five others at 4-under 68.