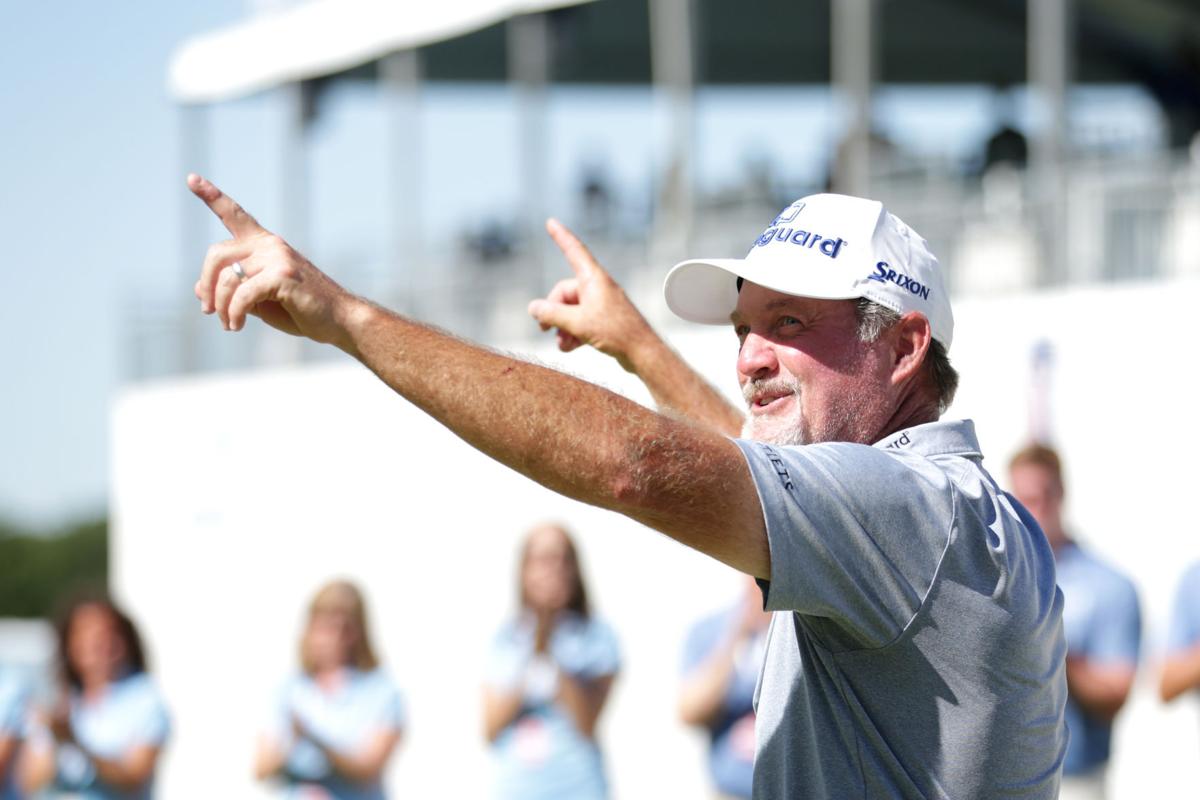 Jerry Kelly acknowledges family and fans after Sunday's victory at University Ridge. He bogeyed the first hole then went bogey-free the rest of the round, which featured seven birdies. 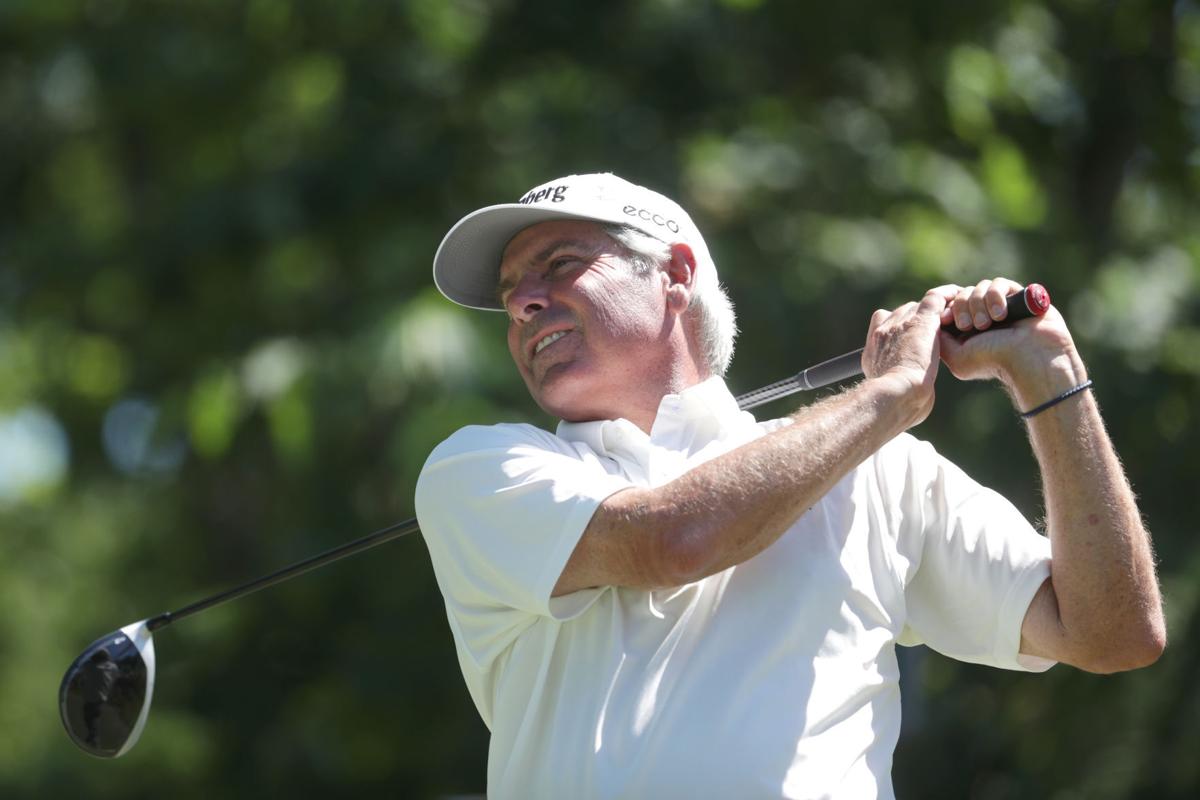 Fred Couples tees off on No. 16. He had five birdies in the final round, his lone bogey coming on No. 18. 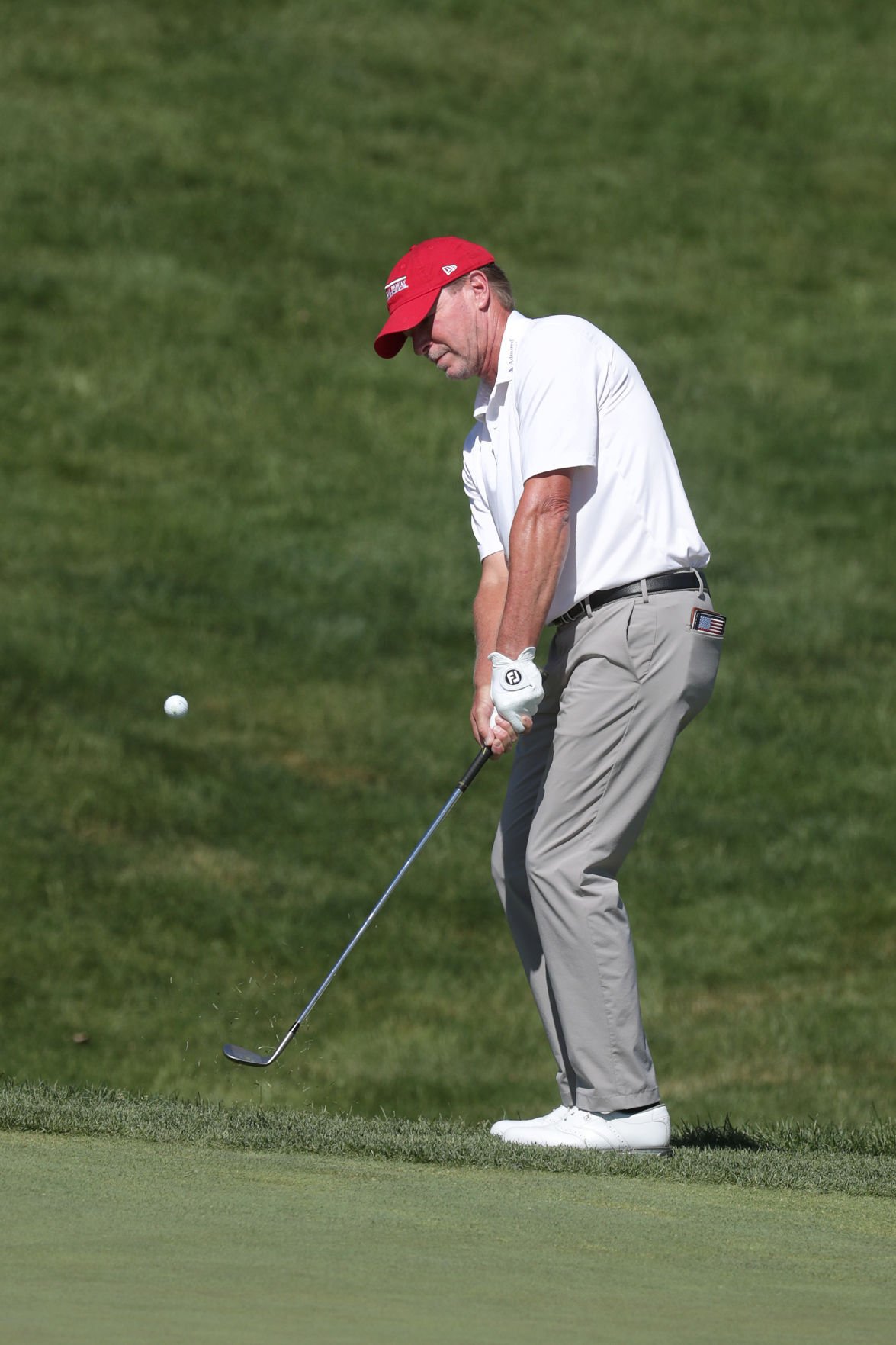 Steve Stricker chips onto the green at No. 2. He had seven birdies in his bogey-free round.

As he stood over the 11-foot putt, Jerry Kelly knew the tournament hung in the balance.

He’d fought through a crowd to the top of the final-round leaderboard Sunday at the American Family Insurance Championship with solid wedge play and smart drives. But the two-stroke lead he had built evaporated by the time he was on the 18th green, and Kelly knew he needed to sink his final shot to keep the pressure on the hard-charging Fred Couples.

“After I hit my drive (on 18), I looked over and watched him stuff it close (on 17),” Kelly said. “I knew he was at least tied, if not one ahead of me. I was thinking making birdie on this one the entire way.”

It ended up being a par, but Kelly calmly drained the putt to ignite the crowd that had enveloped the skybox-lined green and punctuated the celebration with a fist pump. After a bump-and-run shot from the back fringe, Couples missed his 7-foot, uphill par putt that would’ve forced a playoff at University Ridge Golf Course.

Kelly, a Madison native, became the first player to win two AmFam titles after shooting his best round of the tournament, a 6-under-par 66 that left him at 14-under 202. He held off Couples and Miguel Angel Jiménez (13-under 203), who tied for second.

A wave of Kelly’s family and friends moved with him to each hole, including his mother Lee, whose exact charting of shots and planting bird feathers after each of Kelly’s birdies became fan-favorite storylines throughout the weekend. Having that support network close by made the win sweeter, Kelly said.

“I won right after COVID and it was a major and nobody was there, it’s like, ‘Woo-hoo,’” Kelly said in a sarcastic tone. “To do it in front of this group of people means so much more.”

Despite a year off due to the COVID-19 pandemic, the AmFam continued its streak of never being won by more than two strokes.

After shaking off a first-hole bogey, Kelly made the turn at 2 under and then made his move. He produced birdies on the 11th, 12th, 14th and 16th holes. The first two put him in a tie for the lead with Jiménez, and the birdie at 14 gave him the outright lead.

Kelly faced a similar bump-and-run shot as Couples on the 18th green after his approach rolled onto the fringe just beyond the hole, but was able to capitalize on his putt.

Couples and Jiménez, playing in the day’s final group, were battling each other throughout the round, but Jiménez lost ground when he missed birdie chances and recorded 11 consecutive pars from the seventh to 17th hole. Jiménez birded on 18 after a perfect approach, but it was too late.

Couples was looking for a repeat of his AmFam-winning performance from 2017, carding a birdie on the 16th and 17th holes to put the pressure on Kelly.

“I knew I wasn’t going to get it close and it just came out hot and rolled through the green,” Couples said of his approach on 18. “I thought I was putting and then chipped it strong and pushed the putt and that was it.”

Players dealt with dry, fast conditions throughout the weekend and Sunday’s greens forced players to make tough choices and be smart with their ball flights.

“Hat’s off to the grounds crew,” Kelly said. “This is the way to play a golf course right here. It was fantastic.”

Jim Furyk and Retief Goosen finished tied for fourth at 12-under 204 after matching each other’s 4-under performances in the final round. Both were in contention most of the day, but missed chances on the back nine prevented them from being in the hunt on 18.

Outside of the tight finish, some history was made at the course. Steve Flesch tied the tournament’s 18-hole and third-round scoring records with a 9-under 63, carding six birdies on the back nine. Flesch buried a 40-foot putt on the 18th hole to close his day and finished tied for 12th at 8-under 208.

Tournament host Steve Stricker made a run up the leaderboard with his best round of the event. He shot a bogey-free 7-under 65 to finish at 9-under 207 and tied for seventh place.

Although not happy with his performance, Stricker said he was proud of how the tightly the tournament was contested.

“I think this course provides that kind of theater,” Stricker said. “It’s got a lot of opportunities on the back nine, you can make a move if you need to.”

On the second day of the American Family Insurance Championship, Miguel Angel Jiménez takes advantage of Jerry Kelly's mistake on 18 at Univer…

Madison's Jerry Kelly finished with a par on his final hole of the day, but it was good enough to earn him his second consecutive American Fam…

There’s been something more in the air than humidity this week at University Ridge.

Wilson, the Conference USA Coach of the Year in 2020 and 2021, replaces Michael Burcin.

“I don’t know if I’d call it a conflict,” Brooks Koepka said of his relationship with Bryson DeChambeau. “We don’t like each other. There’s plenty of people you guys don’t like. I don’t see any difference.”

Russell Henley leads, but Brooks Koepka just 2 back at US Open

A long Thursday ended in darkness with Russell Henley in the lead and Louis Oosthuizen poised to join him when the fog-delayed opening round wrapped up Friday morning.

Madison's Steve Stricker increased his lead to five strokes Friday in the Senior Players Championship, following an opening 7-under-par 63 with a 68 at breezy Firestone in Akron, Ohio.

The Madison resident closes with an even-par 70 for a six-stroke victory over defending champion and Wisconsin friend Jerry Kelly.

Jerry Kelly acknowledges family and fans after Sunday's victory at University Ridge. He bogeyed the first hole then went bogey-free the rest of the round, which featured seven birdies.

Fred Couples tees off on No. 16. He had five birdies in the final round, his lone bogey coming on No. 18.

Steve Stricker chips onto the green at No. 2. He had seven birdies in his bogey-free round.