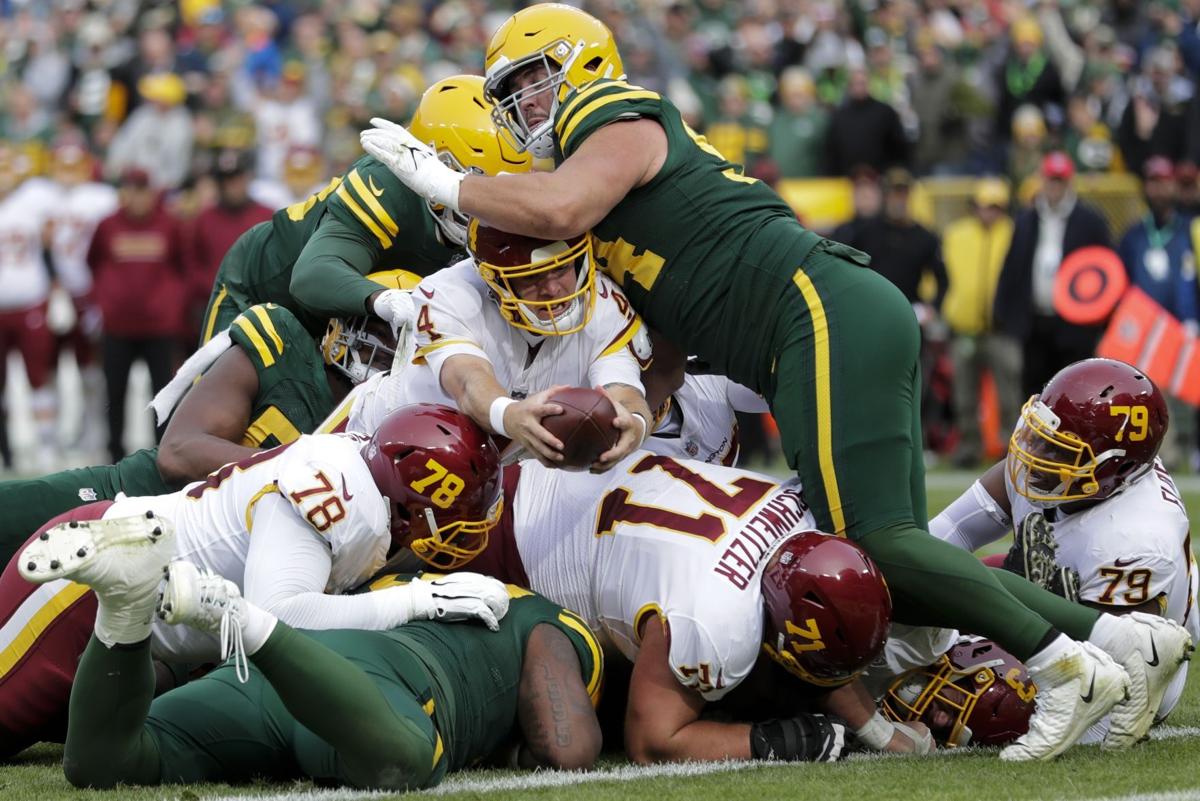 The Packers stop Washington quarterback Taylor Heinicke short of the goal line on fourth down during the second half Sunday at Lambeau Field. 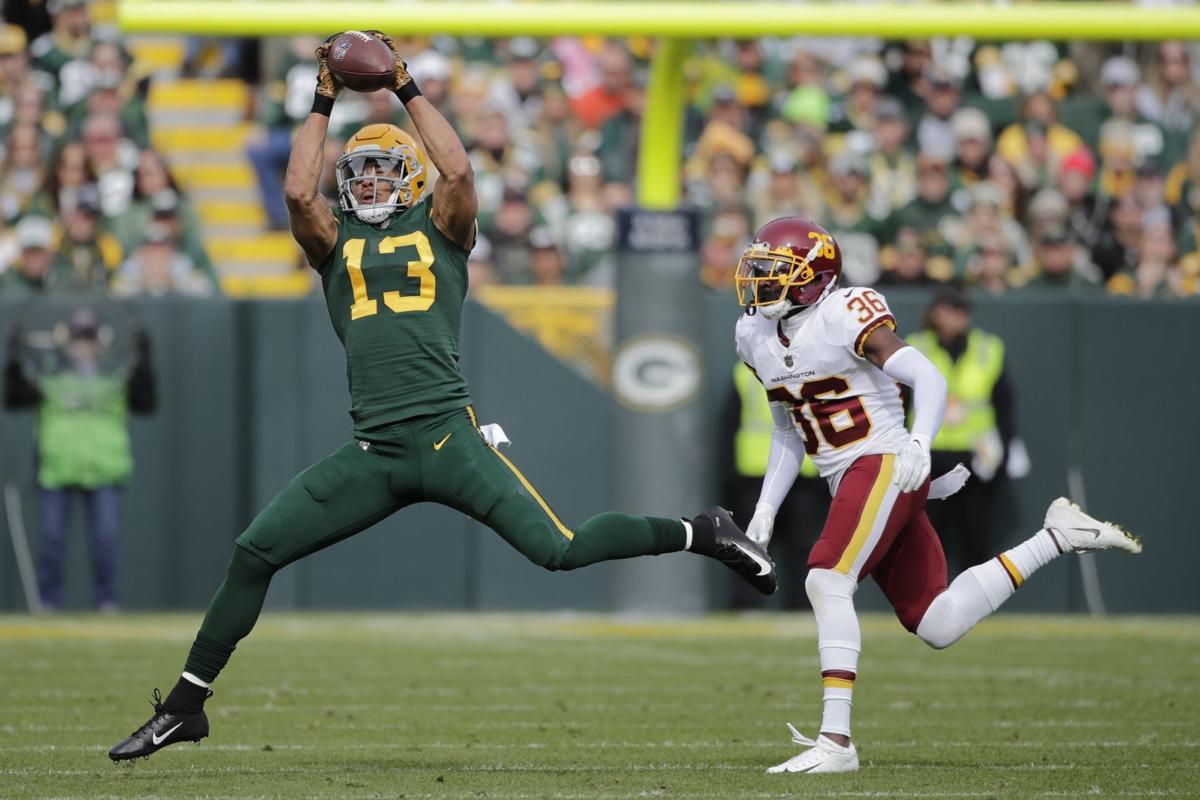 Packers' Allen Lazard catches a pass in front of Washington's Danny Johnson during the first half. Lazard finished with five receptions for 60 yards and a touchdown. 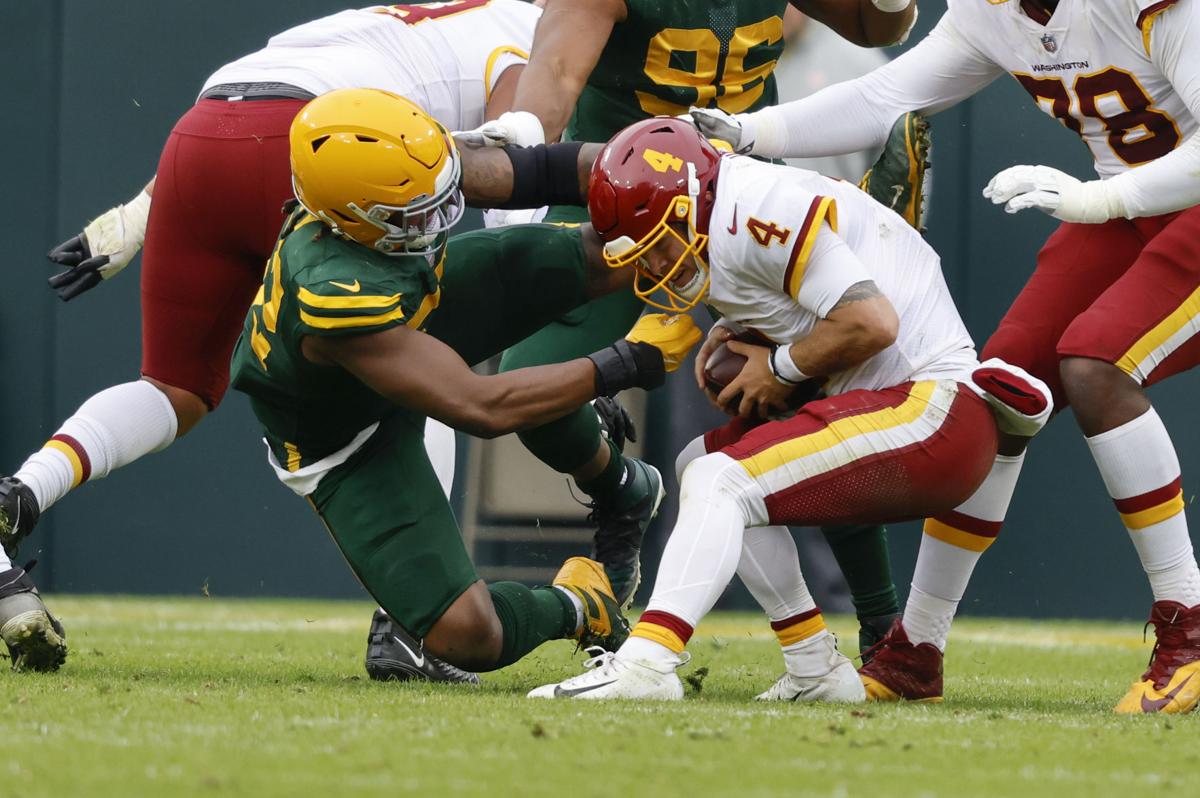 GREEN BAY — For the last several weeks, Aaron Rodgers’ postgame assessment of the Green Bay Packers has essentially been on repeat. In fact, he’s used the same line — virtually verbatim — for nearly a month.

“I feel good about where we’re at,” the quarterback has said — and said again on Sunday, following Green Bay’s 24-10 victory against the Washington Football Team at Lambeau Field.

Each time, Rodgers has finished the sentence with the team’s record, which as of Sunday afternoon was 6-1 thanks to a six-game winning streak that has more than atoned for an abominable showing in a season-opening 38-3 loss to the New Orleans Saints in Jacksonville.

“Not many people would have expected this, maybe looking at our schedule starting the season — (and) definitely not after Week 1,” Rodgers said. “So, I’m proud of our guys.”

It’s an interesting and intentional choice of words by Rodgers, though, who during the week had hinted that this 2021 team reminds him in some ways of the Packers’ last championship team, the 2010 outfit that he led to the Super Bowl XLV title. Rodgers keeps talking about where the Packers “are at” record-wise, while hedging slightly about how they’re actually playing.

And that was the case again Sunday, as the offense was uneven, the defense finally got a red zone stop (four of them, actually) but ceded 430 yards to Taylor Heinicke, and the victory came against a Washington team (2-5) that is deeply flawed, like several other teams the Packers have beaten so far.

“I’ve said the record (each time) because it is fascinating to me that we could play so poorly in Week 1 and bounce back and play so much better the succeeding six weeks,” said Rodgers, who completed 27 of 35 passes against Washington for 274 yards with three touchdowns (one each to Davante Adams, Allen Lazard and Robert Tonyan), no interceptions and three sacks (127.6 rating).

“I do enjoy the energy of this team a lot. It does take a while to see personalities come out with some of the guys, but production leads to opportunity for leadership. ... And that’s when you start to figure out what type of identity your team is going to have.”

The Packers surely will find out more about what kind of team they have on Thursday night, when they travel to Arizona to face the undefeated Cardinals (7-0). The Cardinals stayed unbeaten with a 31-5 win over the Houston Texans Sunday.

“I told them, ‘We’ll enjoy it, but you can’t enjoy it too long, because it’s really like Wednesday in our world now. So you’ve got to turn the page pretty quickly,’” said Packers coach Matt LaFleur, whose team played without its top two edge rushers (Za’Darius Smith, who’s on injured reserve, and Preston Smith, who was inactive with an oblique injury), its top two cornerbacks (Jaire Alexander, who’s on the IR with a shoulder injury, and Kevin King, who missed his second straight game with a shoulder injury) and two of its preferred offensive line starters (left tackle David Bakhtiari, who started practicing last week in his comeback from last year’s season-ending knee injury but remains on the physically unable to perform list, and rookie center Josh Myers, who was placed on IR on Saturday with a knee injury).

“Again, you have to move on to the next game. So what we’ve done in the past, whether it’s good or bad, has no bearing on our future. When you do things, you like to build on your successes, but also you’ve got to learn. And sometimes the best lessons are learned from your mistakes and your failures.”

Speaking of failures, the Packers defense, which had allowed opposing offenses score touchdowns on all 15 of their combined visits inside the Green Bay 20-yard line before Sunday, managed to get four stops, forcing Washington to settle for just three red zone points — with a little help from instant replay.

On Washington’s first trip inside the red zone midway through the third quarter, Heinicke scored on a 3-yard touchdown run — and, having grown up a Brett Favre fan, found a Washington fan in the front row of the end zone seats and did a Lambeau Leap — before replay showed that his knee was down short of the goal line on his dive, negating the score and leaving a fourth-and-goal from inches away.

Washington coach Ron Rivera decided to go for it, but Heinicke’s quarterback sneak was initially stopped, the ball came loose on the pile of bodies and Heinicke recovered it, stretching it across the plane of the goal line. Officials ruled Heinicke down, though, and Rivera’s replay challenge didn’t change the call — preserving the Packers’ 21-7 lead.

“It was disappointing. The interpretation (on the initial touchdown run) is that he gave himself up. To me, when he dove and stretched, that didn’t look like he was giving himself up,” Rivera said. “The interpretation they gave me (on the sneak) is, they couldn’t tell whether he was down or not. They’re not saying the ball didn’t break the plane on the second effort; but what they did say is that they couldn’t tell that his knee wasn’t down. It was disappointing.”

Washington reached the red zone three more times after that, and the Packers defense responded with another fourth-down stop (after linebacker De’Vondre Campbell forced an Antonio Gibson fumble that was initially ruled as having been recovered by the Packers), a Chandon Sullivan end zone interception of a Heinicke pass intended for Adam Humphries, and three consecutive goal-to-go stops inside the Green Bay 10-yard line, forcing Washington to settle for a 45-yard field goal with 2 minutes, 25 seconds left in the game.

“It definitely played a huge part in the game,” Campbell, who finished with a team-high 13 tackles and forced two fumbles, said of the red zone stops. “Everybody knows that we’ve been struggling a little bit in the red zone, so that definitely was a point of emphasis coming in, making sure that we can get that part of our game going. I think today was definitely a step in the right direction. We’ve just got to keep it going.”

Jim Polzin: Why this season is giving Packers quarterback Aaron Rodgers a flashback to 2010

That’s the case for the team as a whole, too. And if they can keep it going, perhaps Rodgers’ postgame assessments will evolve.

“We’re not out here to prove nothing. We’re just here trying to put together our best game. That’s what we’re doing,” said outside linebacker Rashan Gary, who had two of the defense’s four sacks and forced a Heinicke fumble on one of them. “We’re about to go into Week 8 and we’re just chipping away and getting better.

“We have yet to play our best game. Our goal each day and every game day is to put together our best game. We won’t know how that is until we play on Sunday — well, Thursday.”

The Packers extended their winning streak to six games as the Green Bay defense turned in a strong performance in a 24-10 victory over the Washington Football Team at Lambeau Field.

But while Aaron Rodgers may be goofing around, the value of his running ability — even at the advanced football age of 37 — is no joke.

“I’m really proud of Lucas," Aaron Rodgers said following Green Bay's 24-14 win over Chicago. "We sat down a couple Thursdays ago, had a real heart to heart. I love the kid.”

Could the Bears have signed Tom Brady in 2020? And what might have happened if they had?

What if the Bears had been able to lure Tom Brady to Chicago 19 months ago? How aggressively did they even pursue that dream? And what ultimately sent Brady to Tampa Bay instead?

Washington's Taylor Heinicke grew up watchin Packers games on television and idolizing Brett Favre, and on Sunday he gets to face Aaron Rodgers and Green Bay at Lambeau Field.

Here's why Whitney Mercilus signed with the Packers

The linebacker, who was waived Monday by Houston, thinks Green Bay can win the Super Bowl.

Cowboys NFL's 'most-hated team,' Packers and Bucs tied for 2nd, according to study

According to a study of posts on Twitter through the preseason and the first six weeks of the NFL season, the Dallas Cowboys are the "most-hated team" in the league.

Whether long-time Texans edge rusher Whitney Mercilus can be active for Sunday’s game against Washington at Lambeau Field remains to be seen.

David Bakhtiari practiced for the first time since tearing the ACL in his left knee during a Dec. 31 practice.

Will ‘Coach Rodgers’ have alternate sleeping quarters in wake of back pain before Packers’ win over Washington?

Aaron Rodgers woke up Sunday morning with back pain before helping Green Bay to a 24-10 win over Washington — pain Rodgers chalked up to the hotel bed he slept in on Saturday night.

Green Bay likely will have to face the unbeaten Cardinals without their leading receiver after Davante Adams was placed on the list for players who either test positive or have close contact with someone who's infected.

Packers jump to 4th, as unbeaten Cardinals stay alone at top of AP Pro32 poll ahead of Thursday showdown

The Cardinals received all 12 first-place votes for 384 points in balloting Tuesday by media members who regularly cover the NFL.

Had Allen Lazard been vaccinated, he would be able to play against the Arizona Cardinals on Thursday night.

Jeff Janis, Jared Abbrederis and James Jones carried the load in a playoff loss to the Cardinals after the 2015 season.

No Davante Adams, no problem? Defying logic, Adams-less Packers are 6-0 under Matt LaFleur

"Not having Adams is not good for them, but it's going to force Aaron (Rodgers) to play a cleaner game," Cardinals defensive coordinator Vance Joseph said. "History shows you, he's played good and so we'll see how it works out."

The Packers stop Washington quarterback Taylor Heinicke short of the goal line on fourth down during the second half Sunday at Lambeau Field.

Packers' Allen Lazard catches a pass in front of Washington's Danny Johnson during the first half. Lazard finished with five receptions for 60 yards and a touchdown.