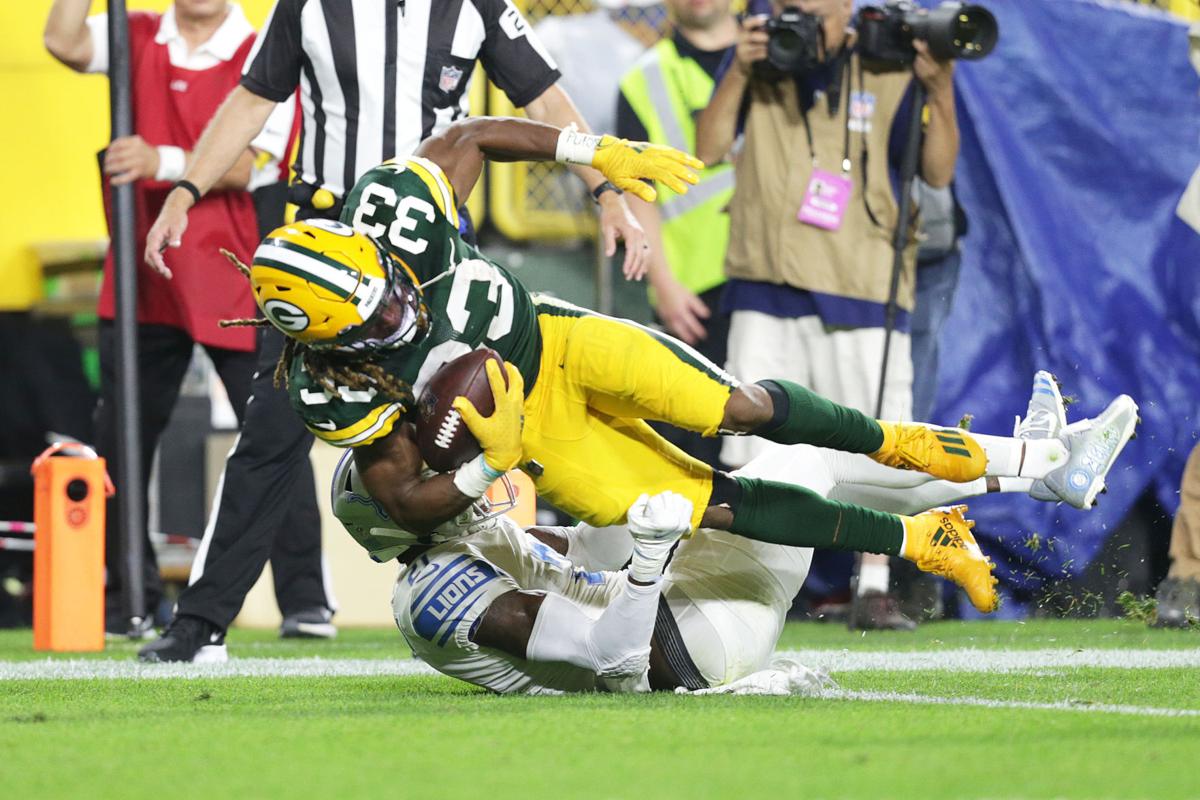 Packers running back Aaron Jones breaks through the tackle attempt by Lions defensive back Tracy Walker III late in the second quarter Monday night at Lambeau Field. It was the second of Jones' three scoring receptions. 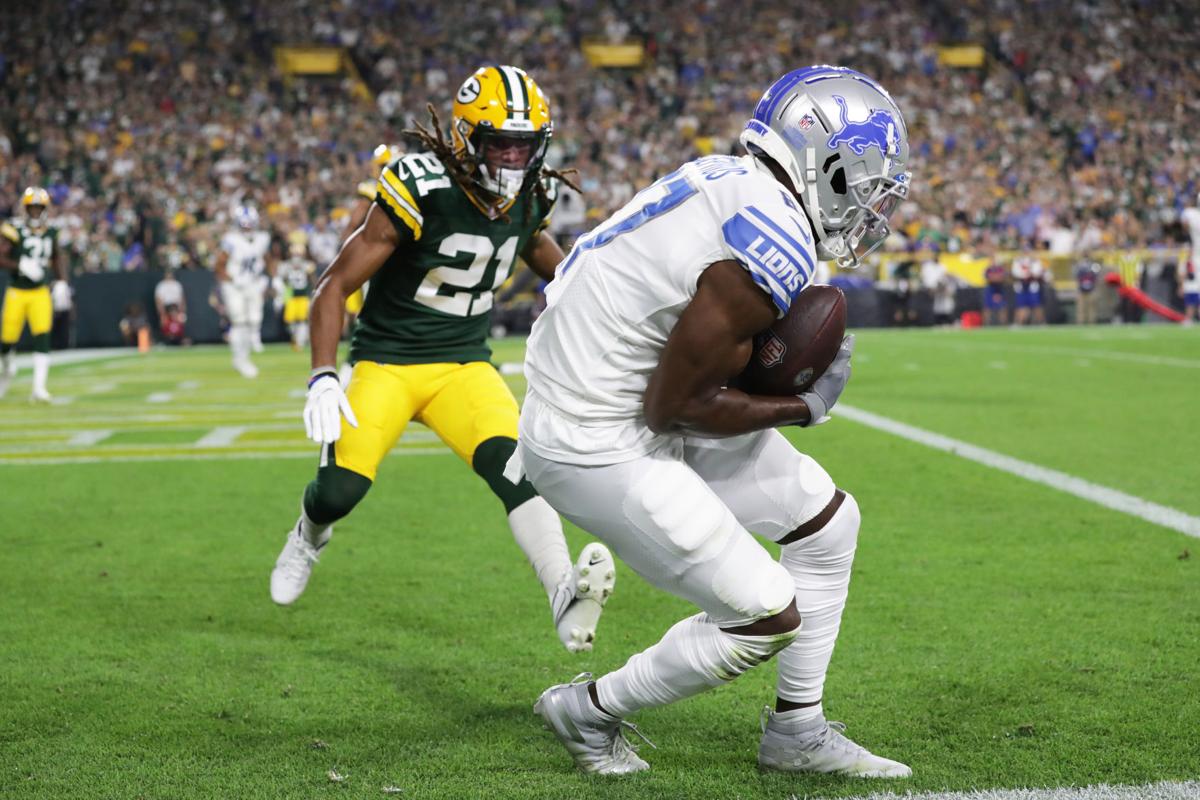 GREEN BAY — Aaron Jones turned and looked into the Lambeau Field stands, knowing the one person he wanted to see wasn’t going to be there.

The Green Bay Packers running back was in the midst of a special night — a four-touchdown performance that would fuel his team’s 35-17 victory over the Detroit Lions on Monday night. It was the kind of performance his father, Alvin Jones Sr., would have loved.

But having lost his father suddenly at age 57 in April, Jones instead looked into the bleachers and saw so many others who were there to support him.

His mother. His brother. Aunts and uncles. Cousins and friends. And, his own toddler son, Aaron Jr.

Jim Polzin: Packers continue their NFC North dominance by pummeling the Lions in the second half

“I really appreciate them for being here. It did a lot for me,” Jones admitted. “I’m used to turning around and seeing my dad in the stands and just smiling to know everything is OK. So, when I was seeing them, I was good.”

He was more than just good on this night. He was spectacular.

For all that talk there’d been over the previous eight days about there being a blueprint for shutting down the Packers’ offense in the wake of the team’s season-opening 38-3 blowout loss to New Orleans, head coach Matt LaFleur got back to one of the tried-and-true aspects of the offense: Getting the ball to Jones — early, often, and in a variety of ways. And it worked.

While the Packers defense remains decidedly a work in progress, the offense more than got back on track, with Jones carrying most of the load.

A week after gaining just 22 total yards on seven touches in the Packers’ 38-3 season-opening loss to the New Orleans Saints, Jones got the ball seven times on the Packers’ opening drive alone, rushing six times for 30 yards before capping the drive with a 4-yard touchdown on a shovel pass from quarterback Aaron Rodgers.

By game’s end, Jones had amassed 115 total yards from scrimmage (17 carries for 67 yards, six receptions for 48 yards) while scoring four touchdowns — three receiving, one rushing. It was the second four-touchdown game of his career, matching his four rushing touchdowns in a victory at Dallas in 2019.

“I mean, he's been through a lot. He’s a great human being,” Rodgers said. “He adds a lot to our team as just a player. He’s an exceptional player. It’s just different when you watch the film when 33’s back there. He’s just a different type of back, and he’s a special player. But the person is really, really a great person.

“Man, you love having him on the team.”

Rodgers, a week removed from his own poor performance against the Saints, completed 22 of 27 passes for 255 yards with four touchdowns and no interceptions (145.6 passer rating). It marked the fourth straight time that Rodgers responded to a Packers loss by throwing four touchdown passes in the next game. Rodgers did that the week after each of the Packers’ three losses last season, and the Packers won all three of those games.

“There’s so many overreactions that happen from a week-to-week basis,” Rodgers said. “So, it’s nice to come out, have a good performance and get the trolls off our back for at least a week.”

Wide receiver Davante Adams, who was limited to five receptions for 56 yards against the Saints, caught eight passes for 121 yards, including a 50-yard strike from Rodgers that set up a 22-yard touchdown to tight end Robert Tonyan that put the Packers ahead for good at 21-17 with 10 minutes, 26 seconds left in the third quarter.

“We hadn't really hit a shot this year yet before that. So being able to just click up on one, I think it did a lot for everybody’s confidence,” Adams said of the 50-yarder. “It's no secret that I don’t get a whole lot of opportunities where they just allow me to get over the top anymore. So it makes it tough. But (that was) a great call in a good situation. And you know, (Rodgers) delivered a perfect ball. I just had to catch it.”

Tonyan’s touchdown was the first of three straight scores by the Packers, who entered halftime trailing, 17-14. Against the Saints, they’d fallen behind 17-3 at the break.

The much-maligned Joe Barry-led defense, which was shredded by Saints quarterback Jameis Winston last week, still had its problems with the Detroit offense and quarterback Jared Goff, at least until the rebuilding Lions’ ineptitude surfaced in the second half.

“The first half it wasn’t looking too great for us, but I was happy with how we finished. Definitely need to start faster as a team, really in every phase,” LaFleur said. “I think we did make some necessary adjustments at halftime. One of the things certainly I talked to Joe about was, ‘Either play coverage, or we have to pressure, because when we were doing our four-man rushes and playing man coverages behind it, we weren’t getting to the quarterback.’

“We needed to affect the quarterback much more.”

Grading the Packers: Offense takes care of business but defense still a concern after an uneven showing

At halftime, the Lions had racked up 197 total yards, picked up 12 first downs and converted both of their red-zone trips into touchdowns.

But after halftime, the Lions failed on a fourth-and-1 play from the Green Bay 25-yard line when Goff’s pass to ex-University of Wisconsin wide receiver Quintez Cephus was incomplete with Packers rookie first-round pick Eric Stokes in coverage. Goff fumbled the snap on the very first play of the Lions next possession, with Packers linebacker Krys Barnes recovering it at the Detroit 23-yard line, setting up Jones’ fourth score.

The series after that, Goff had the ball slip out of his hand on a third-down play and recovered it for a 10-yard loss, and then Goff was picked off by linebacker De’Vondre Campbell on an ill-advised throw while being pressured by Jonathan Garvin.

Goff finished the night 26 of 36 for 246 yards with two touchdown passes and the two turnovers for a passer rating of 97.7.

“We just had to lock it in,” Campbell said. “It’s a long season. You can’t let a few mishaps here and there define who you are as a team. We’ve got a lot of football left. This is a step in the right direction. We’ve just got to continue to keep building and continue to keep stacking.”

But while the defense might’ve done its part — with the Lions’ help during the second half — the night belonged to the offense.

LaFleur called Jones’ number on the Packers’ first three offensive plays, and Jones gained 3, 6 and 7 yards. Jones then had runs of 9, 4 and 1 yard before Rodgers shoveled him the ball on second-and-goal from the 4 and Jones sprinted to the end zone to tie the game at 7-7.

After a three-and-out on their second possession, Rodgers & Co. went back to work on the next drive, with Jones’ 13-yard catch-and-run setting up his 1-yard TD catch to re-tie the game at 14-14.

Then, on the opening drive of the third quarter, Rodgers hit Adams deep down the right sideline with a pinpoint rainbow throw on third-and-12, leading to Tonyan’s TD three plays later. A wide-open Jones caught an 11-yard touchdown off a blown coverage on the next series, and Goff’s fumbled snap deep in Lions’ territory led to Jones’ fourth score.

“My dad’s always taught me that how you respond to adversity is what makes a man,” said Jones, who wore a small black football-shaped locket containing some of his father’s ashes on a necklace under his uniform. “I think we came out, we did a good job of responding. We played well, we played at a high level.”

Particularly Jones, who actually lost the necklace during his second touchdown. The Packers grounds crew stayed after the game, looking for it, and eventually they found it, Jones said Tuesday morning.

“If there was any place to lose it, that’s where my dad would’ve wanted me to lose it,” Jones said after the game. “So I know he’s smiling.”

Jim Polzin: Joe Barry isn't worried after his rotten debut as Packers defensive coordinator, but should we be?

The man who had failed runs leading defenses in Detroit and Washington started with a dud in Green Bay and his positivity isn't very reassuring.

The Detroit Lions’ new coach and quarterback are off to a start that resembles the team's previous regimes.

Matt LaFleur may go against grain and not defer on opening kickoff if the Packers win the coin toss.

Left tackle Elgton Jenkins wasn’t able to practice with the rest of the team on Wednesday, and his status for Sunday night’s game at San Francisco is in doubt.

The Packers have lost four of their past five games in California but quarterback Aaron Rodgers is always happy to return, having grown up cheering for the Niners as a kid in Chico.

Back with Packers, Randall Cobb says, ‘I just have so much gratitude every single day when I wake up’

The coaching staff is still trying to figure out how to integrate Cobb — who has played just 22% of Green Bay's offensive snaps — into the offense.

After COVID-19 bout, Packers assistant Jerry Montgomery ‘thankful to be back’

“I wouldn’t wish that on anybody,” Jerry Montgomery said of contracting the coronavirus. “One day you’re good. The next day, you can’t do something you love."

Packers running back Aaron Jones breaks through the tackle attempt by Lions defensive back Tracy Walker III late in the second quarter Monday night at Lambeau Field. It was the second of Jones' three scoring receptions.