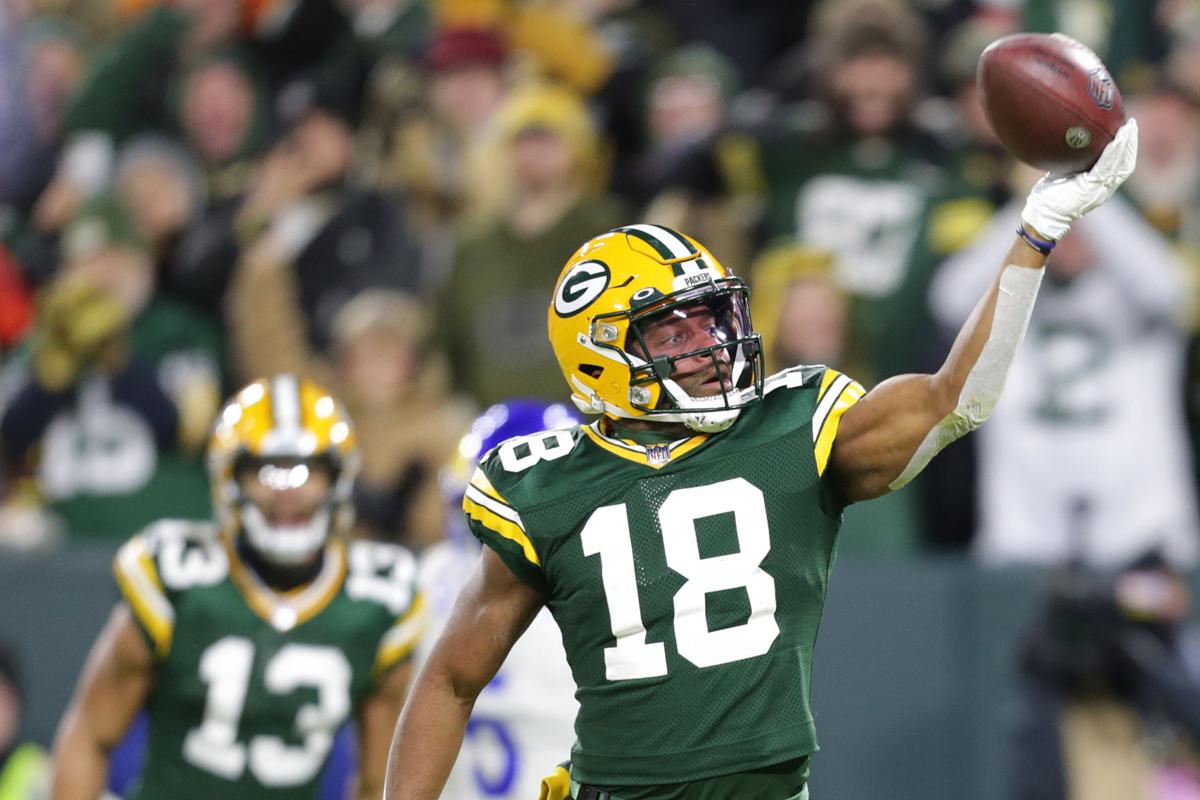 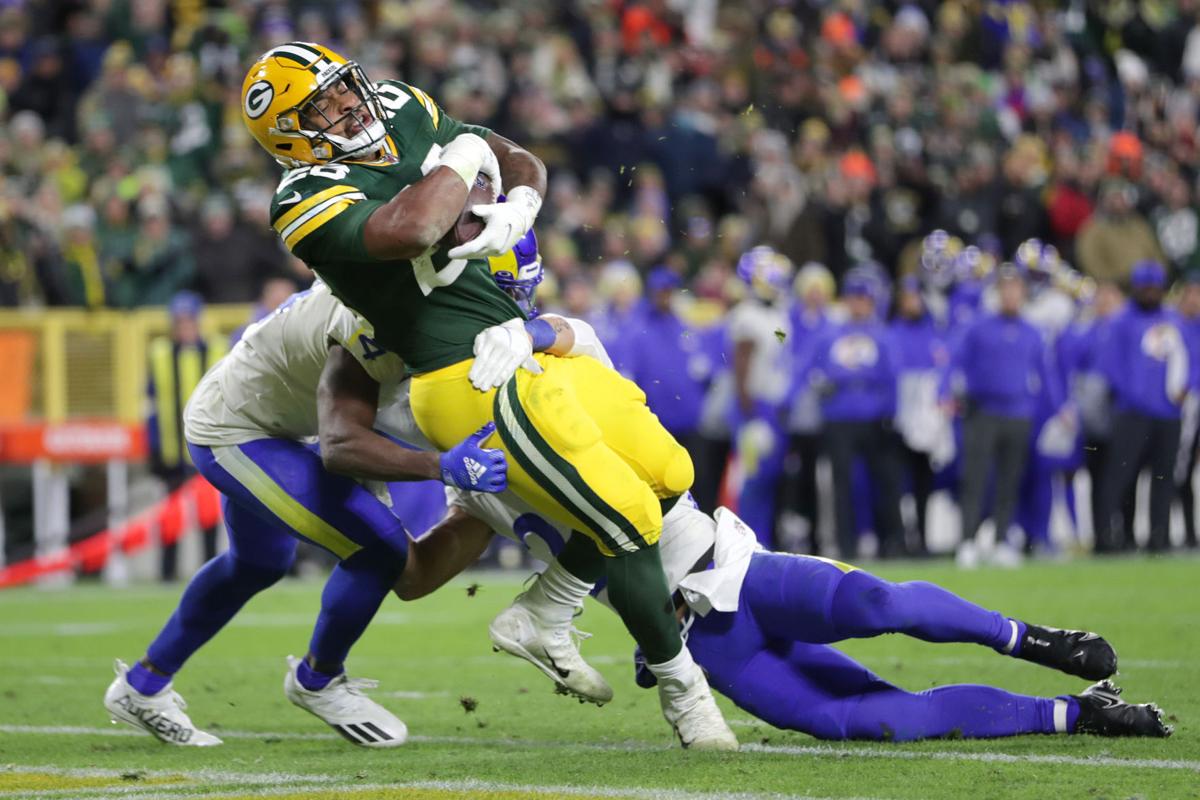 Packers running back A.J. Dillon scores on a 5-yard touchdown reception against coverage by Rams safeties Jordan Fuller, left, and Taylor Rapp during the third quarter. 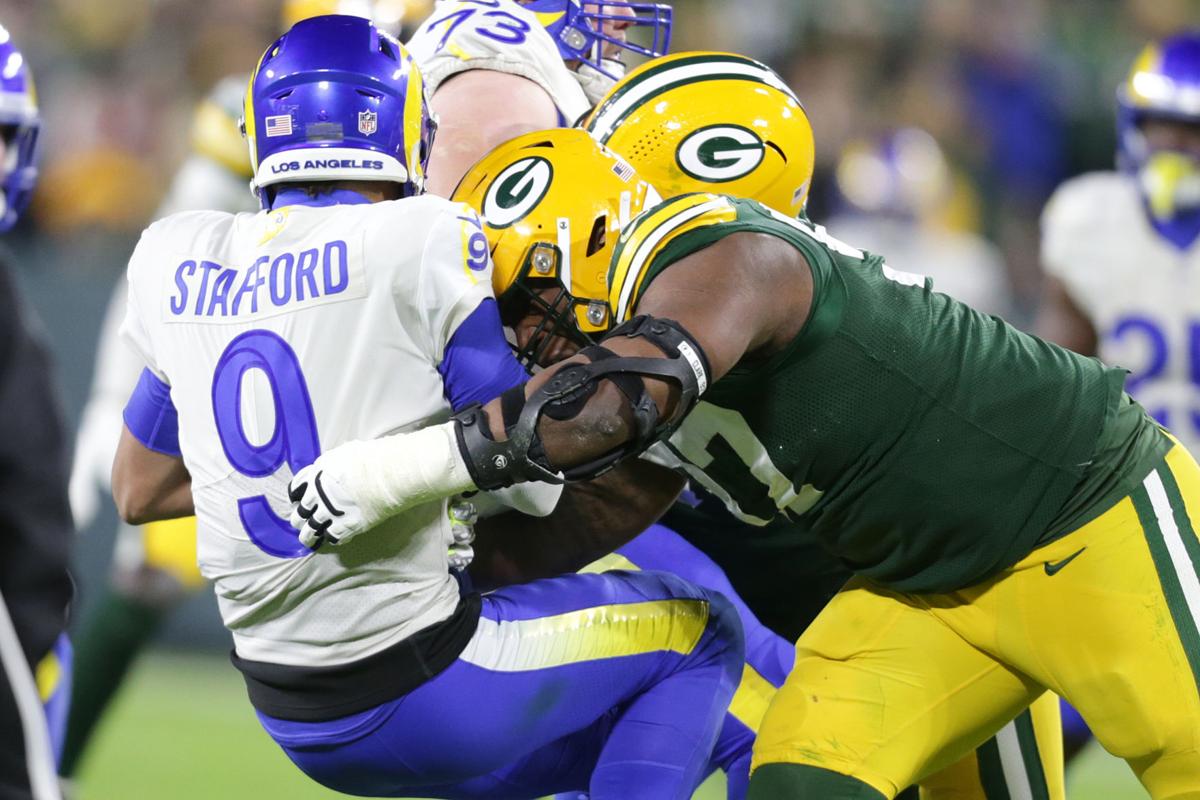 GREEN BAY — Matt LaFleur is convinced that the beat writers covering his Green Bay Packers make fun of him behind his back for his sometimes corny coachspeak.

There’s his spiel about hitting the reset button, emphasizing the importance of not letting the previous week’s outcome — good or bad — affect the next week’s preparation.

There’s his mantra about going 1-0 every week, a corollary tenet about not looking too far into the future, whether that’s at a big matchup looming on the schedule or season goals that are coming into view.

Lame or not, those two sayings have clearly served him well in his nearly three years as the Packers coach, considering the guy still hasn’t lost back-to-back regular-season games.

But during Sunday’s 36-28 victory over the Los Angeles Rams at Lambeau Field, it was another of LaFleur’s core beliefs that was on full display: The importance of everyone doing his 1/11th.

“Matt, he preaches that, and I feel like a great coach can instill those type of values in you,” said star wide receiver Davante Adams, who caught a team-high eight passes for 104 yards. “For some of the younger guys who haven’t experienced that, I feel like he’s a great coach for that. And us older guys who have been around for a while, we don’t necessarily need certain words or whatever — because you kind of have that internal motivation — but it’s great to have a coach that echoes what we believe in and what we have been believing in for a while around here.”

The Rams came from Hollywood to Titletown as the alleged epitome of a team going “all-in” — having traded significant draft capital to acquire edge rusher Von Miller from the Denver Broncos, having paid up to sign wide receiver Odell Beckham Jr. earlier this month (after the Packers’ offer was for the veteran minimum only), in addition to making a major offseason quarterback change from Jared Goff to Matthew Stafford. They left, despite coming off a bye week, with a three-game losing streak and a 7-4 record.

The Packers, meanwhile, had done their own version of going “all-in” — mortgaging their future salary caps to move money around to keep the band together, even before they knew if their future Pro Football Hall of Fame quarterback, Aaron Rodgers, would emerge from his summer of discontent and return for a 17th season with the only team he’s ever known as a pro. With the win, they improved to 9-3 and enter the latest bye they’ve ever had with a seemingly insurmountable lead in the NFC North and are a half-game behind the Arizona Cardinals in the race for the NFC’s No. 1 seed and the lone playoff bye in the conference. (But, the Packers hold the head-to-head tiebreaker, thanks to their Oct. 28 win.)

“This was an important one,” said Rodgers, who despite his well-publicized fractured left pinkie toe completed 28 of 45 passes for 307 yards with two touchdowns, no interceptions, one sack and a passer rating of 97.2. “After the loss (at Minnesota) last week, with Minnesota losing and us winning back to go 3.5 (games) up in the division now with five to play, obviously that puts that division squarely at the end of the tunnel. We’re moving closer to that.

“In the conference, obviously Tampa’s going to be tough. Arizona’s leading it right now at 9-2. The Rams have a great football team. So there’s still a lot to be figured out in the conference. But I like where we’re at. I like or football team. … We’ve got to win our division first, secure that home playoff game and then we have the tiebreaker over Arizona, so we’re right on their heels right now.“

And they’ve done it all without the star-power in-season additions that the Rams did. In fact, the two recognizable names they had added — ex-Dallas Cowboys inside linebacker Jaylon Smith, and ex-Houston Texans pass-rusher Whitney Mercilus — weren’t helping them on Sunday, with the disappointing Smith having been jettisoned and Mercilus, whom the Packers could really use right about now, done for the year with a ruptured biceps.

“I think it’s a credit to everybody in this building for taking that same mentality,” said LaFleur, who is now 35-9 in regular-season play during his tenure, with five games left on the schedule. “I can’t say enough about the guys just coming together, playing for one another, embracing roles.

“Everybody wants to get the production numbers, the stats. And it doesn’t always go that way. But our guys are truly selfless, they play for one another, they embrace whatever role is given to them, what they’re asked to do. We always talk about focus on doing your 1/11th, doing the best job you can, giving it each and every play. I’m just really proud of our guys.“

And many of those guys are guys who even some diehard Packers fans might not have known before a few weeks ago.

Guys like cornerback Rasul Douglas, whose pick-six interception return for a touchdown late in the third quarter pushed Green Bay’s lead to 36-17.

Guys like Yosh Nijman, who more than held his own against the Rams’ formidable pass rush while playing in place of not one but two outstanding-but-absent left tackles, David Bakhtiari and Elgton Jenkins, allowing the offense to function without three preferred starters. (Rookie center Josh Myers is also on injured reserve with a knee injury.)

Guys like punter Corey Bojorquez, the ex-Rams player whose punting might be the only bright spot on special teams right now and who helped create a turnover and delivered hidden yardage that proved vital, even as the Packers owned an almost 20-minute advantage in time of possession.

Guys like Randall Cobb, once a big-name player beloved by Packers fans, who’d been deemed washed up by the team but found his way back after two years adrift because Rodgers insisted on bringing him back. Before leaving with a groin injury, Cobb caught four passes for 95 yards in the first half, including a 7-yard touchdown and a 54-yard catch-and-run to set up a field goal.

“Everyone knows what’s expected of them when they do get their number called, so I’m not shocked that guys are just filling in and we’re doing our job,” said Douglas, who also had a victory-clinching end zone interception to seal the Packers’ win in Arizona a month ago. “That’s how we practice, that’s how we’re getting coached. But we can’t wait for those guys to get back, for sure, and we’re at 100%.

That coaching approach starts with LaFleur, who after the game went to another of his favorite talking points: That there’s still so much out there for a team that, despite its success, hasn’t put together the kind of complete, three-phase game he envisions. That was the case again Sunday, as the defense gave up some huge plays (including 79- and 54-yard touchdown passes), the special teams’ struggles in the return game and kicking game remained, and the offense had as many punts (three) as points (three) to show for its final five possessions of the game.

“I’m really proud of those guys,” Rodgers said. “Rasul, how was this guy on the practice squad? The dude has made so many plays for us. De’Vondre (Campbell), how was he not wanted by anybody? Obviously, Randall is near and dear.

“I said it a while back about 2010, there were a lot of guys on that (Super Bowl XLV) team I feel like that weren’t wanted by certain people, certain teams. They thought they were done or just couldn’t find a place for them. I’m really proud of those contributions.”

Aaron Rodgers and the Packers head into their bye week on a high note after defeating Matthew Stafford and the Rams 36-28 at Lambeau Field.

Against the Rams' fearsome pass rush, Yosh Nijman will need to play even better than he did during a three-game stint earlier in the season.

Jim Polzin: Packers positioned for regular-season success after grinding out a victory over the Rams

Matt LaFleur’s team all but secured the North division while putting itself in great shape in the race for a No. 1 seed in the NFC with an effort that, while far from perfect, was more than enough to send them into their off week on a happy note.

For the second time this season, Rasul Douglas delivers game-changing interception for Packers

The cornerback delivered his second game-changing interception of the season on Sunday, this time a pick that he returned 33 yards for a TD in the Packers’ 36-28 victory over the Rams.

Matt Stafford threw a pick-6 and had a fumble that led to a Green Bay touchdown Sunday as the Rams fell 36-28 to the Packers for their third consecutive loss.

Light snow could accumulate northeast of Madison on Monday, warm-up to follow for southern Wisconsin

Highs will be pushing 50 by the middle of this week for southern Wisconsin, according to forecasters.

The NFL Network reported Monday that Aaron Rodgers has decided against having surgery, at least for now, although a re-injury or deterioration could lead Rodgers and the medical staff to change course.

Vacation, all they ever wanted? Not yet — as Packers coaches have self-scouting to do, first

After a 12-week grind resulted in a 9-3 start, head coach Matt LaFleur and his staff will be at the team’s Lambeau Field headquarters during the bye week breaking down the team they know best: Their own.

No. 2 Packers edge closer to No. 1 Cardinals in AP Pro32 poll

The Cardinals received eight of the 12 first-place votes — down from 11 last week — for 378 points in balloting Tuesday by media members who regularly cover the NFL. The Packers got the other four.

Hoping to avoid kicking themselves in the playoffs, Packers work to repair troublesome field-goal operation for stretch run

The unit’s struggles — with a miss from 42 yards that clanged off the left upright with 3 minutes, 5 seconds left in the Packers’ 36-28 win over the Los Angeles Rams on Sunday at Lambeau Field — means there are nine missed field goal attempts this season (including two that were blocked).

In ‘huge pickup’ Rasul Douglas, Packers find themselves an ‘unbelievable pro’ — and a game-changer

On Wednesday, Rasul Douglas won the NFC defensive player of the week award, making him the first Packers cornerback to be so honored since Pro Football Hall of Famer Charles Woodson won it in October 2010.

“Yeah, if there’s definitely a plus, it is for Jordan’s benefit in terms of him getting the reps and going out there and making sure that he gets a little bit better each and every day,” coach Matt LaFleur said.

Division dreams? While Packers’ goals include much more, another NFC North crown could be theirs next week

A Vikings loss to the Steelers on Thursday followed by a Packers victory over the Bears on Sunday would secure Green Bay's third consecutive NFC North title.

Packers running back A.J. Dillon scores on a 5-yard touchdown reception against coverage by Rams safeties Jordan Fuller, left, and Taylor Rapp during the third quarter.