Marquez Valdes-Scantling was on the visitors’ bench, getting high-fives and handshakes for his 45-yard touchdown reception with 14 seconds left in the first half — a grab that had pushed the Packers’ lead to 22-7 in what would end up being a 43-34 victory over the Minnesota Vikings at empty U.S. Bank Stadium in the teams’ 2020 season opener.

From the right side of the screen came the guy who’d thrown the pass, quarterback Aaron Rodgers. Social distancing guidelines be damned, the two-time NFL MVP wrapped Valdes-Scantling in a bear hug (left arm around his back, right arm cradling MVS’s head) before delivering multiple congratulatory whacks to the third-year receiver’s shoulder pads.

“I love Marquez. He’s such a good-hearted kid,” Rodgers said after the game. “I think he really adds a lot to our locker room, and he wants it so badly. I think that’s the only thing that gets in his way sometimes. He just wants to make those plays so badly.”

Given how often NFL telecasts have seemed to show Rodgers’ angry, annoyed or disappointed on-field reactions to mental errors in the past, the moment — one that, in reality, isn’t as unusual as some of Rodgers’ detractors think — felt significant.

“I think it was just a hug,” Valdes-Scantling said in a Zoom video call. “I think he was just excited about the play for us to score a touchdown at the end of the half. To go out and make that play, to be able to bounce back and just go out and keep doing things well, I think that was just something that he was excited about and it was just a pure enjoyment thing for us both. I don’t think it was anything to get at the media or whatever. I think he was hugging me because I made a play.”

What was even more significant was what Rodgers would do later after Valdes-Scantling failed to make two plays.

To start the second half, Valdes-Scantling would follow that touchdown catch with two major gaffes — ending the Packers’ first possession of the third quarter by dropping an easy third-down across-the-middle ball that would have picked up a first down and taken the Packers into Minnesota territory, and dropping an exquisitely placed deep ball from Rodgers that would have been a 61-yard touchdown had Valdes-Scantling caught it on the first play of the Packers’ ensuing possession.

They were the kind of missed opportunities that can cost your team a victory in a closer game, and they were the kind of mistakes that led to Valdes-Scantling’s disappearance from the offense last season, when he caught just five passes for 36 yards on 19 targets in the final nine games. In the playoffs, coach Matt LaFleur had Valdes-Scantling on the field for just six total offensive snaps — and only one in the team’s loss to the San Francisco 49ers in the NFC Championship Game.

While Rodgers’ responses weren’t exactly we’ll-get-‘em-next-time facial expressions, he hardly looked irate. More importantly, five plays after the dropped would-be touchdown, Rodgers went back to Valdes-Scantling on a free play and hit him for a 39-yard gain down the right sideline, setting up a 1-yard Davante Adams touchdown catch.

“The thing that I noticed this training camp was he was catching the ball better,” Rodgers said. “I know that might sound like a strange statement for a receiver. (But) I think he was trusting his hands more, and he made a couple of catches with very strong hands the last week of training camp to give me a pretty good feeling about how he was going to perform (against the Vikings).

“Now he’s got to prove it every single week. We talked a lot about how consistency is the most important thing he needs to show. But I’m just really proud of him. I think he had the right mindset, and we’ve talked about how important visualizing those plays is and manifesting the things you want. I’m proud of his approach, and I’m proud of the way he played.”

Added Adams: “There was a lot of talk about how he was going to come into this year. But the way he responded, the way he came into camp, I mean, you heard it from Aaron, myself, coach LaFleur, he definitely showed a different type of focus this time around. I had a feeling that he was going to come and have a great start the way that he did. And I don’t put my name on just anybody.”

For his part, Valdes-Scantling knows that one game does not a season make. He even acknowledged he’ll probably drop more passes this season. It’ll be up to him to decide how he’ll respond, but with Rodgers’ and Adams’ support, Valdes-Scantling believes there’s nothing he can’t do.

“There’s no receiver in the history of the NFL that hasn’t dropped a ball. It’s going to happen,” he said. “You’ve just got to keep going to the next play and go make the next play. If your quarterback trusts you, he’ll keep throwing you the ball, and that’s what mine did. I had other opportunities to go out and make plays, and that’s what I did.

While the Lions suffered a heart-breaking loss after a dropped pass cost them what would’ve been the winning touchdown, Cephus had a good debut showing. Cephus caught three passes for 43 yards, and led Detroit with 10 targets. He was tied with Dallas’ CeeDee Lamb for the most snaps by a rookie in Week 1 with 57. He may see his usage decline when the Lions get healthy at receiver, but Cephus’ opening act was a good one.

Gordon’s debut in Denver started rough, as he lost a fumble after a second-quarter catch that gave the visiting Titans the ball in the red zone. But he came on strong in the second half to finish with 78 yards and a touchdown on 15 carries. Gordon and Phillip Lindsay were splitting the reps in the backfield before Lindsay left the game due to a toe injury.

Playing his first game in a Jacksonville uniform, Schobert tallied eight total tackles, including five solo and one for loss. Schobert teamed with linebacker Myles Jack (11) and safety Josh Jones (12) to rack up 31 tackles as the Jaguars allowed just three points in the second half in a come-from-behind win.

In his NFL debut, Taylor led the Colts with nine carries, gaining 22 yards. He was one of the favorite targets for quarterback Philip Rivers as well, catching six passes for 67 yards. Taylor is line for an even heavier workload going forward after starting running back Marlon Mack suffered an Achilles injury that will force him to miss the rest of the season.

After finishing last season as the runner-up as defensive player of the year, Watt looked back to form on Monday night. He snared an interception to go with a tackle for loss, two pass deflections and two quarterback hits. Watt’s interception came on a stellar play on which he diagnosed the Giants quick pass play and quickly adjusted from rushing the passer to picking off the pass.

Wagner wasn’t in the starting lineup for the Packers in their victory over the division-rival Vikings, but he came in after Lane Taylor suffered an injury. He was solid against a stout Minnesota pass rush, earning a 79.7 grade from Pro Football Focus, the fifth-best grade for a Packer on Sunday.

Wilson started his season with a bang in Atlanta, throwing for 322 yards and four touchdowns in a 38-25 win. He went 31 of 35 passing, had a quarterback rating of 143.1 and led the Seahawks in rushing with 29 yards on three carries. Seven receivers caught multiple passes from Wilson, including two scoring strikes to running back Chris Carson.

No fans were in the stands for the two costliest calls in Week 1: offensive pass interference flags on Cincinnati's A.J. Green and Dallas' Michael Gallup in the closing seconds of close games.

Kansas City earned 10 of 12 first-place votes for 382 points in balloting Tuesday by media members who regularly cover the NFL.

After just one game, the Detroit Lions running backs seem to have established a pecking order: Adrian Peterson and then everyone else. 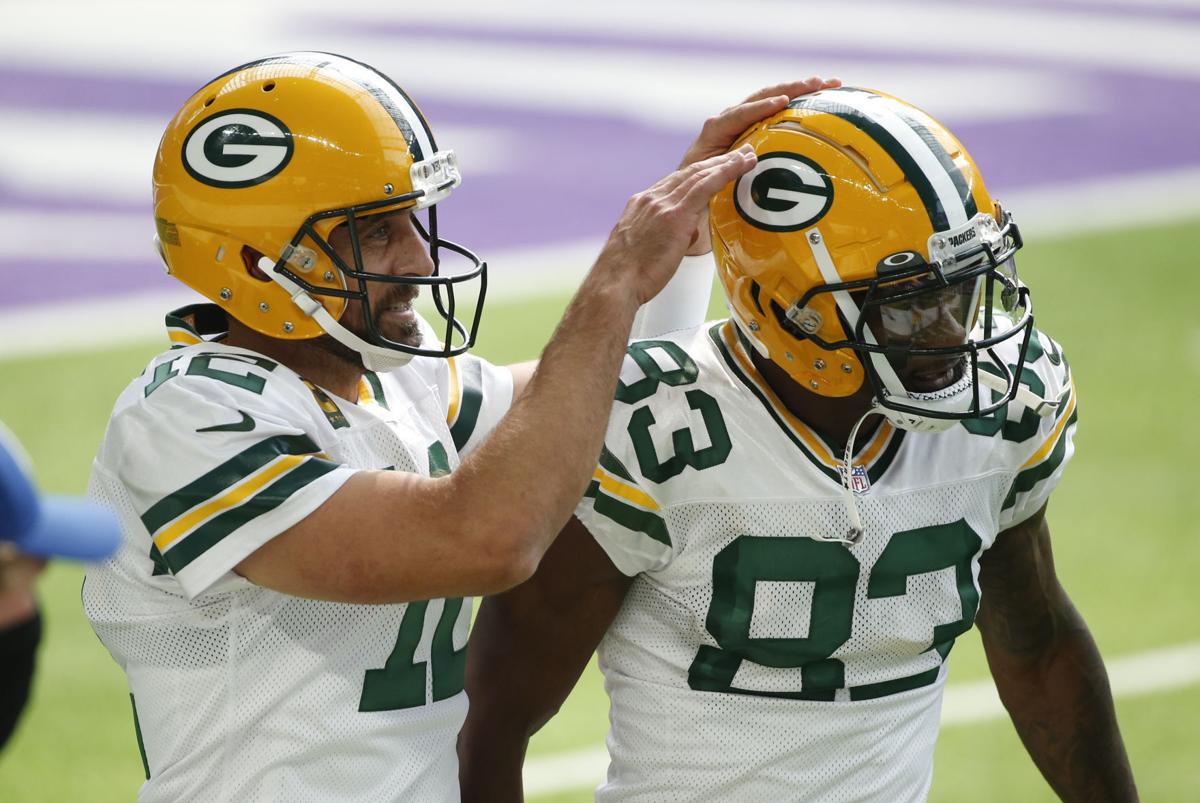 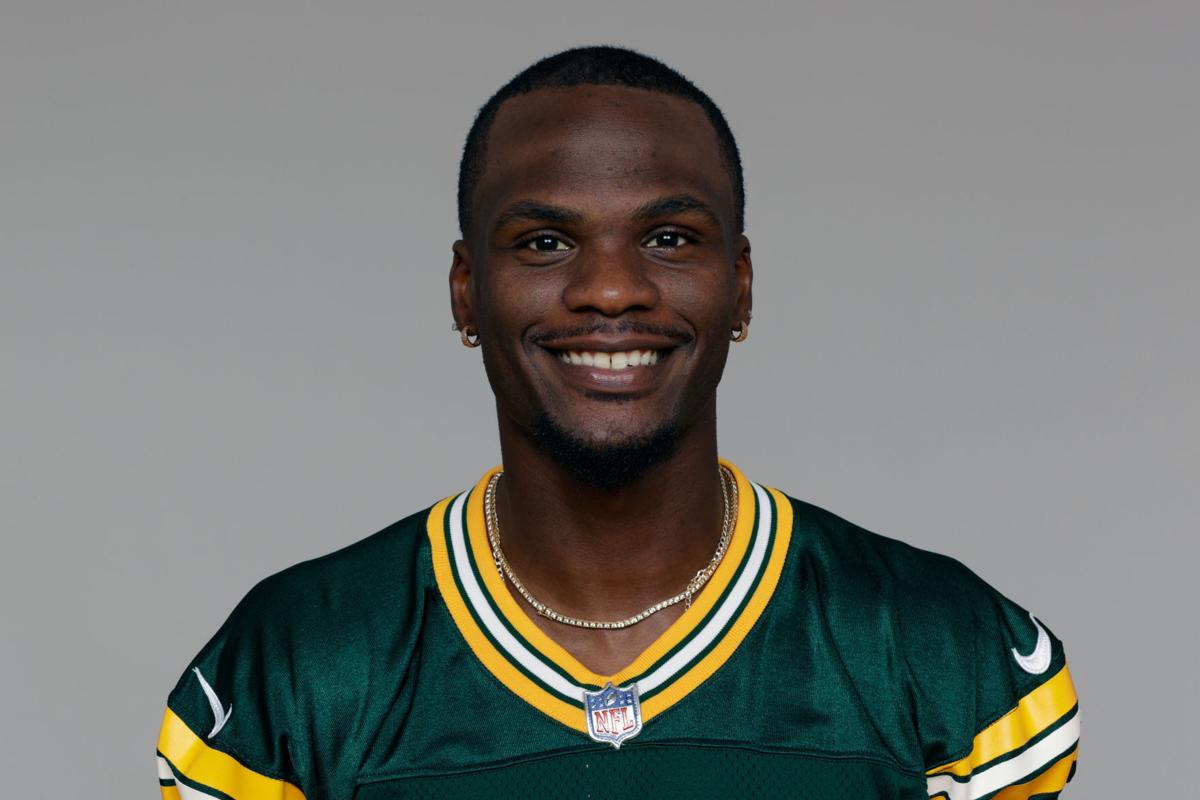