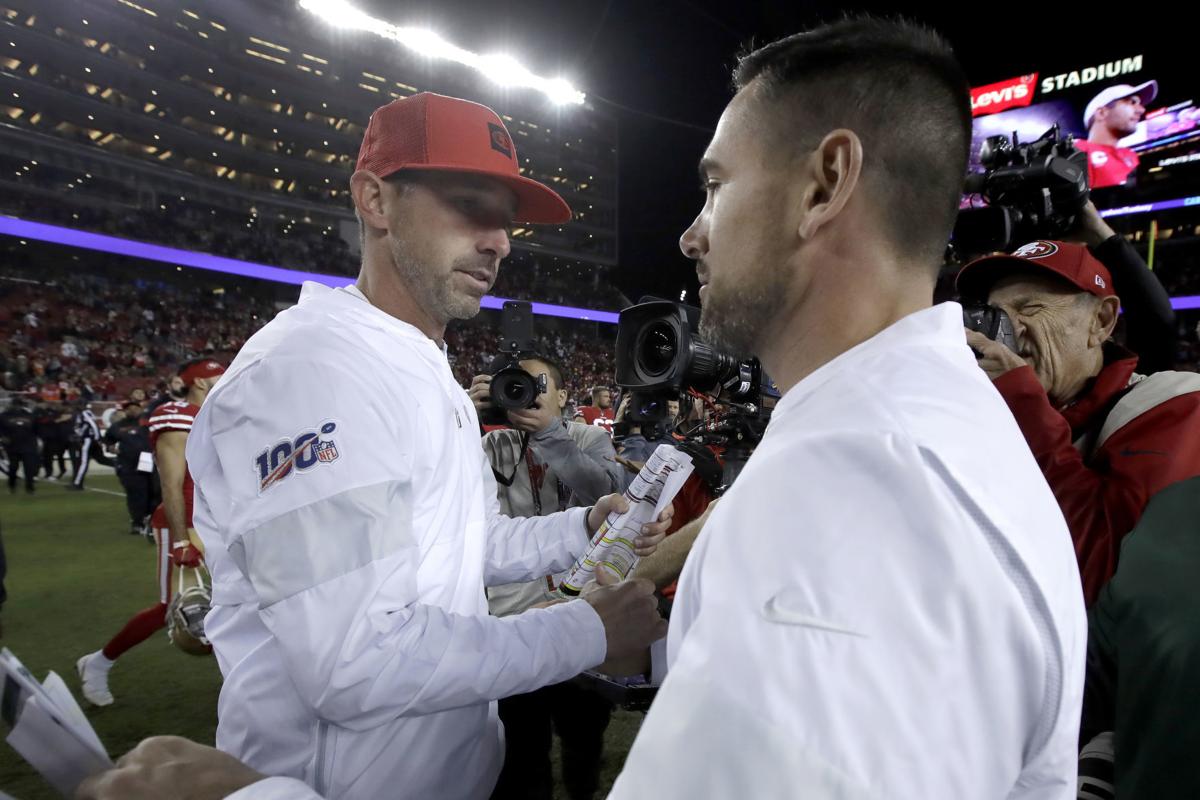 Tennessee Titans head coach Mike Vrabel, right, congratulates running back Derrick Henry after his touchdown dive in the first half of a wild-card playoff win over the New England Patriots on Saturday, Jan. 4, 2020, in Foxborough, Mass.

That's how long the coaches of the NFL's conference championship teams have been around.

It's rookie Green Bay coach Matt LaFleur versus Kyle Shanahan, who is in his third season with San Francisco. And second-year Tennessee coach Mike Vrabel matching wits with Kansas City's Andy Reid, who is in his seventh season with the Chiefs but, coupled with his Philadelphia history, seems like the NFL coaching's answer to Methuselah.

None of them has a Super Bowl ring as a head coach.

The Packers-49ers rivalry is rich with history. Less so with the Titans and Chiefs. Both conference title games are rematches from this season. San Francisco throttled visiting Green Bay 37-8 in Nov. 24. Two weeks earlier, Tennessee rumbled to a 35-32 victory over the Chiefs in Nashville.

Tennessee running back Derrick Henry was a bruising factor in that one, rushing for 188 yards and two touchdowns, including one that covered 68 yards. He found a crease up the middle, danced past a Chiefs defender diving at his feet, and beat everyone to the end zone.

In that game, Titans quarterback Ryan Tannehill threw a 23-yard touchdown pass to Adam Humphries with 23 seconds remaining, and the home team sealed the victory with Joshua Kalu blocking Kansas City's last-second field goal attempt. It was the first game back for Chiefs quarterback Patrick Mahomes, who missed two games with a dislocated kneecap.

"It's fun to win a game like that," Tannehill said at the time. "Battle back in the fourth quarter at home and find a way to win is a ton of fun."

That was no aberration for Henry. He's capable of doing serious damage on the ground, as he did Saturday against top-seeded Baltimore, when he rushed for 195 yards in a 28-12 upset.

The Titans are looking to become the third sixth-seeded team since the 2002 realignment to win a Super Bowl, and the first since Green Bay in the 2010 season.

Of course, the Chiefs will have something to say about that. They set a slew of records Sunday, including their biggest comeback in history, when they dug their way out of a 24-0 hole to beat Houston, 51-31.

Said Mahomes of the Titans: "The biggest thing is they believe and they're going to fight until the end just like we are. You've seen them all season long as they have gone through adversity. They've gotten back on the horse and fought. Even when we played them, we were up a couple scores late in the game, and they fought to the end and wound up beating us."

The Packers didn't put up much of a fight when they were blown out by the 49ers earlier this season. Aaron Rodgers completed 20 of 33 passes for a mere 104 yards and was sacked five times. Green Bay generated 198 yards of offense, going 1 for 15 on third down and 1 for 3 on fourth.

"We definitely want to see them again," Packers linebacker Blake Martinez told reporters at the time. "We are competitors and we want to be able to show our true selves."

Rodgers is 0-2 against San Francisco in the postseason, with his Packers losing in the 2012 divisional round at the 49ers, and in a wild-card game at Lambeau Field the following year.

This will mark the eighth time the Packers and 49ers have met in the postseason, with Green Bay holding a 4-3 edge. All four of those victories came when the Packers had Brett Favre at quarterback.

Some answers, lots of questions for NFC, AFC title games

After a wild weekend of historic offensive performances by Derrick Henry and nearly every Kansas City Chiefs player, spiced by some timely defense from all the winners, we have a whole lot of questions heading into the NFL's Final Four.

The dominant defense and powerful running game that carried the San Francisco 49ers to an 8-0 start this season delivered a 27-10 victory over the Minnesota Vikings in the divisional round Saturday.

The Chiefs outscored the Texans 28-0 during the second quarter alone, and eventually reeled off 41 consecutive points before cruising the rest of the way to a 51-31 victory Sunday that propelled Kansas City back to the AFC championship game for the second consecutive season.

Elusive Russell Wilson was outstanding in leading Seattle's second-half comeback from an 18-point deficit, but it was Aaron Rodgers who ruled the day with a superlative effort that showed he is still the king among NFC quarterbacks.

Once mighty Seattle defense struggles in season-ending loss to Packers

Seattle's defense bent and then broke Sunday, surrendering 344 total yards and committing costly penalties in a season-ending 28-23 loss to the Green Bay Packers in the NFC divisional round.

After 2 TDs in Seahawks' loss to Packers, Marshawn Lynch 'not sure' on future

After the game, Marshawn Lynch got philosophical, encouraging young players to be as smart as they can in a league where careers are often short-lived.

With over a century of Green Bay Packers history, fans can be forgiven if they're not familiar with the latest member of the storied franchise to be inducted into the Pro Football Hall of Fame in Canton, Ohio.

Tennessee Titans head coach Mike Vrabel, right, congratulates running back Derrick Henry after his touchdown dive in the first half of a wild-card playoff win over the New England Patriots on Saturday, Jan. 4, 2020, in Foxborough, Mass.