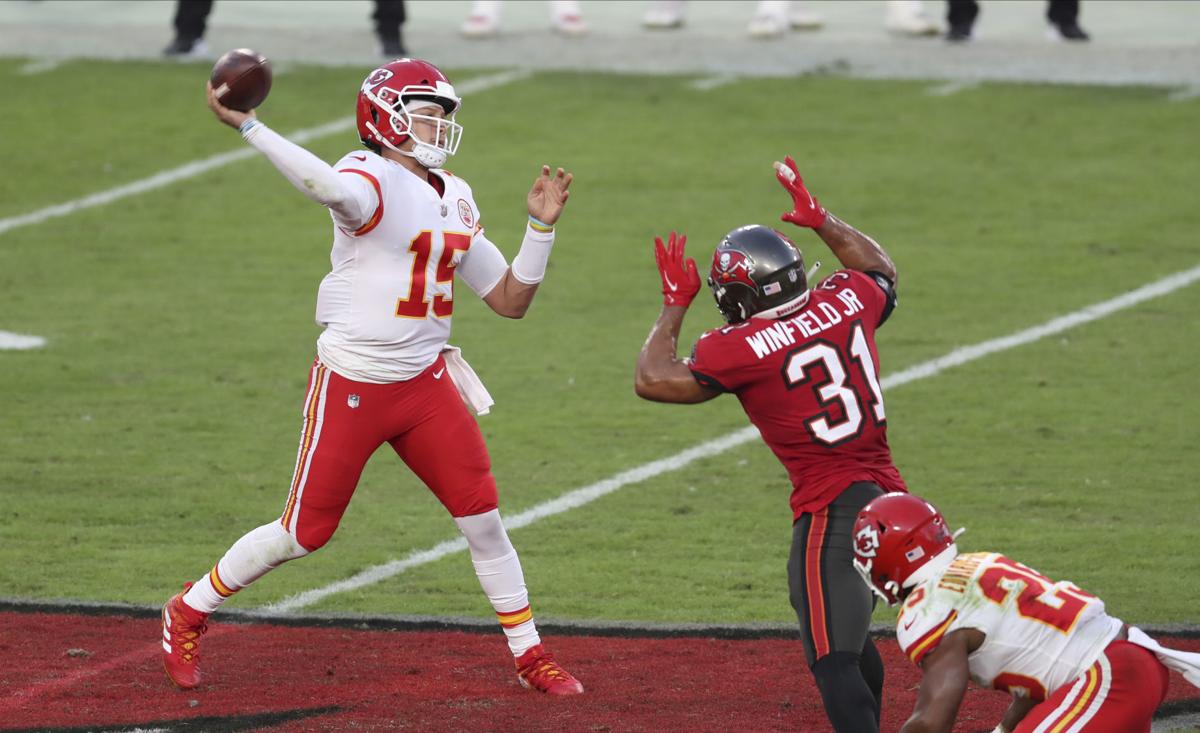 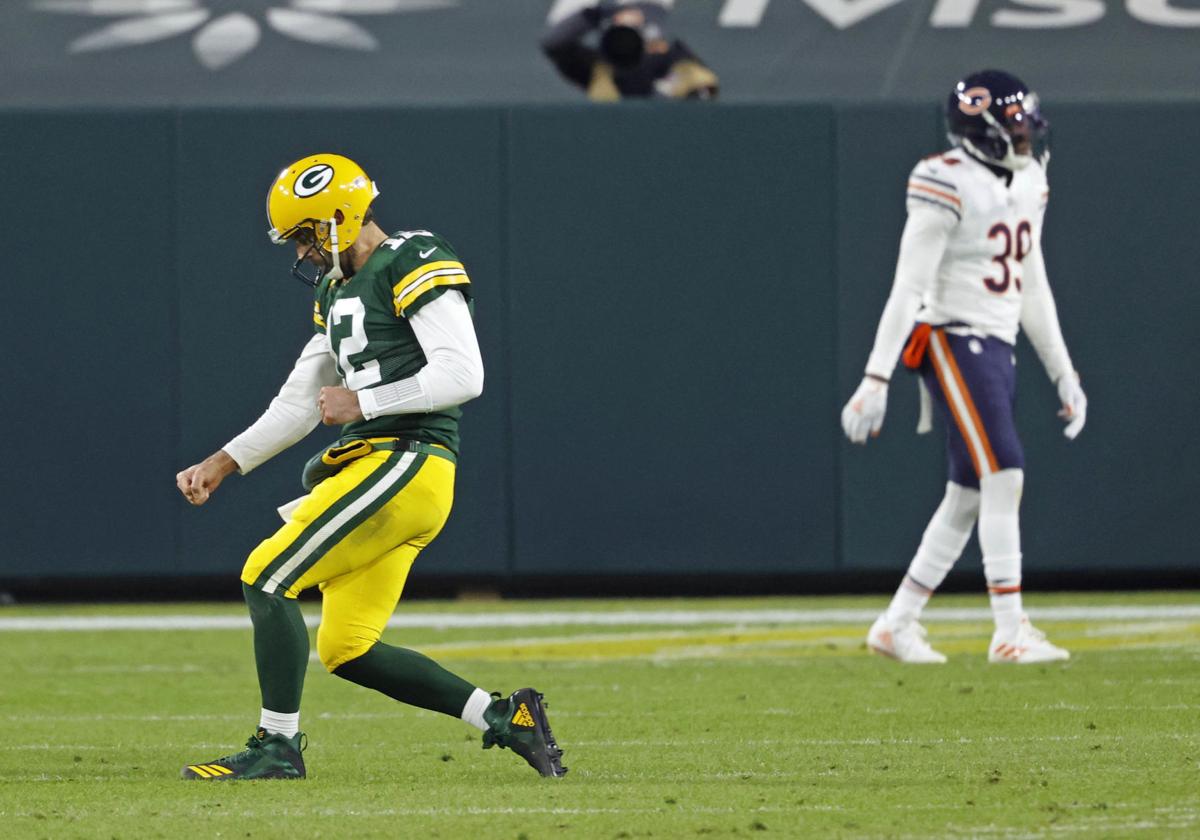 Green Bay Packers quarterback Aaron Rodgers reacts after one of his three first-half touchdown passes in a 41-25 win over the Chicago Bears at Lambeau Field on Sunday, Nov. 29, 2020. 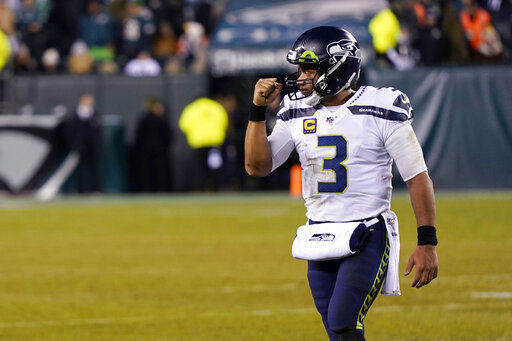 Seattle's Russell Wilson reacts during the second half of Seattle's win over the Philadelphia Eagles in a wild-car playoff game on, Sunday, Jan. 5, 2020, in Philadelphia.

SEATTLE — DK Metcalf continues to do his part to help his quarterback.

Yes, Metcalf's performance Monday night — 10 catches for a career-high 177 yards — helped propel the Seahawks to a 23-17 victory in Philadelphia. After the game, Metcalf continued to lift up his quarterback, standing behind the mic and propping up Russell Wilson's NFL MVP chase.

When Metcalf began that sign-off early in the season, Wilson was in full-throttle #LetRussCook mode, and his MVP bandwagon was overflowing with supporters. The Seahawks were 5-0, the former Wisconsin Badgers quarterback was on pace to shatter the NFL's season record for touchdown passes, and a talking point for broadcasters during every Seahawks game predictably turned to the fact that Wilson has never — never!? gasp! — received a single MVP vote.

"I don't want a vote," Wilson said then. "More importantly, I want to win."

In September, Wilson was the favorite to win his first MVP award, and he was just about everyone's MVP at the season's midway point.

In December, it's now fair to wonder if his vote-free streak will continue.

Wilson is not out of the MVP race, but he has fallen behind — and probably significantly behind — the Chiefs' Patrick Mahomes and the Packers' Aaron Rodgers with five weeks remaining in the regular season.

A look at the raw statistics of those three QBs:

The Associated Press convenes a panel of 50 people — including broadcasters, writers, analysts and former players — to vote for the MVP each season. Longtime NFL reporter John Clayton is one of those voters, and he said this week he has, in order, Rodgers, Mahomes and Wilson as his top three.

As for the criteria he uses to analyze MVP candidates, Clayton prioritizes team victories and an individual's touchdown total.

"Wilson was clearly the first-half leader," Clayton said, "but he has dropped a little."

USA Today NFL reporter Lorenzo Reyes, another MVP voter, also said Mahomes and Rodgers — not necessarily in that order — are his top two candidates this week. Wilson is still "a legitimate candidate" but has dropped into the next tier alongside Texans quarterback Deshaun Watson and Titans running back Derrick Henry, with Arizona quarterback Kyler Murray not far behind.

Reyes said he tries to take a comprehensive look at a player's overall value, prioritizing efficiency and production among QBs. "I also place significant weight on how a player performs in the clutch, two-minute drill, or when playing from behind," he wrote in an email. "So passer ratings in those such scenarios are also given special consideration."

He also weighs the talent and circumstances around the candidate. Does he play with a stacked roster? Does he benefit from playing with an elite defense? What kind of system does he play in?

"In the end," Reyes wrote, "I think that's where some of the value determination comes into play; a player is truly valuable if he elevates those around him or masks deficiencies present elsewhere on the roster. Sometimes that can't be avoided, where the most valuable player happens to be on a great team, but even then I'm still looking to see what the player does to make those around him better."

Aaron Schatz, founder of the analytics site Football Outsiders, will vote for the MVP award for the first time at the end of this season. He said Thursday that he will, naturally, take an analytics-driven approach to determine player value, and he will start with two the advanced statistical measurements he created — DVOA (Defense-adjusted Value Over Average) and DYAR (Defense-adjusted Yards Above Replacement). Mahomes ranks atop the list in both those categories; Rodgers is second and, surprisingly, Watson is third.

To consider anyone else besides Mahomes at this point, Schatz said, one would have to make a case that the talent around Mahomes and the Chiefs' offensive scheme give Mahomes a greater advantage over other elite QBs.

Ideally, Schatz said, voting for NFL MVP would closer resemble voting for Major League Baseball's MVP awards, where voters select a top 10 and the winner is determined on a points scale. If that were the case, Wilson no doubt would have received many votes earlier in his career; Schatz figures Wilson might have finished second in 2015 and 2019 in that scenario.

What would Wilson have to do to get back in the thick of the MVP race over the next five weeks? "He would have to do what he did in September," Schatz said.

Wilson, of course, faltered during a brutal midseason stretch in which in the Seahawks lost three of four games, with Wilson responsible for 10 turnovers in those three losses. He has been better — and more careful with the football — in back-to-back victories over Arizona and Philadelphia, vaulting the Seahawks to sole possession of first place in the NFC West and offering some hope that a December surge could reignite Wilson's MVP candidacy.

One component that could work against Wilson? Coach Pete Carroll has made it known he would like the offense to be more balanced, especially with running back Chris Carson and Carlos Hyde healthy again. No team dropped back to pass more than the Seahawks in the first 10 weeks of the season, but the Seahawks are likely to lean less on Wilson over the next five weeks.

And that probably won't do much to boost Wilson's MVP resume.

"No," Schatz said with a laugh. "That won't help his MVP candidacy."

But, if Carroll is right, perhaps it will give the Seahawks a better shot at another Super Bowl.

That's one win Wilson would gladly accept as a consolation prize.

With fond memories to take away from Green Bay, nostalgic Aaron Rodgers says, ‘Hopefully, that day isn't too soon’

“If you had told that 21-year-old he'd still be sitting here at 37, I'd be pretty happy about that,” Green Bay Packers quarterback Aaron Rodgers said Wednesday.

Free agent receiver Tavon Austin could be another weapon for quarterback Aaron Rodgers and also in the return game.

Packers quarterback Aaron Rodgers is on pace to be sacked a career-low 16 times.

Amid expanded protocols, Packers get to work — and contemplate their dire-emergency QB options

Coach Matt LaFleur wouldn't say who would play QB in a pinch but a few players on the roster have high school or college experience at the position.

Ahead of facing Packers on Sunday, Eagles fall to Russell Wilson, Seahawks

DK Metcalf caught 10 passes for 177 yards, Russell Wilson threw for 230 yards and a touchdown and the Seattle Seahawks beat the Philadelphia Eagles 23-17 on Monday night.

Get the latest postgame updates after the Green Bay Packers defeated the Philadelphia Eagles 30-16 Sunday at Lambeau Field.

With 30-16 win over Eagles, Packers believe they have something ‘beautiful’ going

Improving to 9-3 with the victory over the Eagles, the Packers maintained their three-game NFC North lead with four games remaining.

Watch now: Is Russell Wilson right about the Seahawks' offensive line — and can it be fixed?

Russell Wilson said this week he wants better protection and for the Seahawks to improve their offensive line for the 2021 season. That leads to some questions.

Green Bay Packers quarterback Aaron Rodgers reacts after one of his three first-half touchdown passes in a 41-25 win over the Chicago Bears at Lambeau Field on Sunday, Nov. 29, 2020.

Seattle's Russell Wilson reacts during the second half of Seattle's win over the Philadelphia Eagles in a wild-car playoff game on, Sunday, Jan. 5, 2020, in Philadelphia.