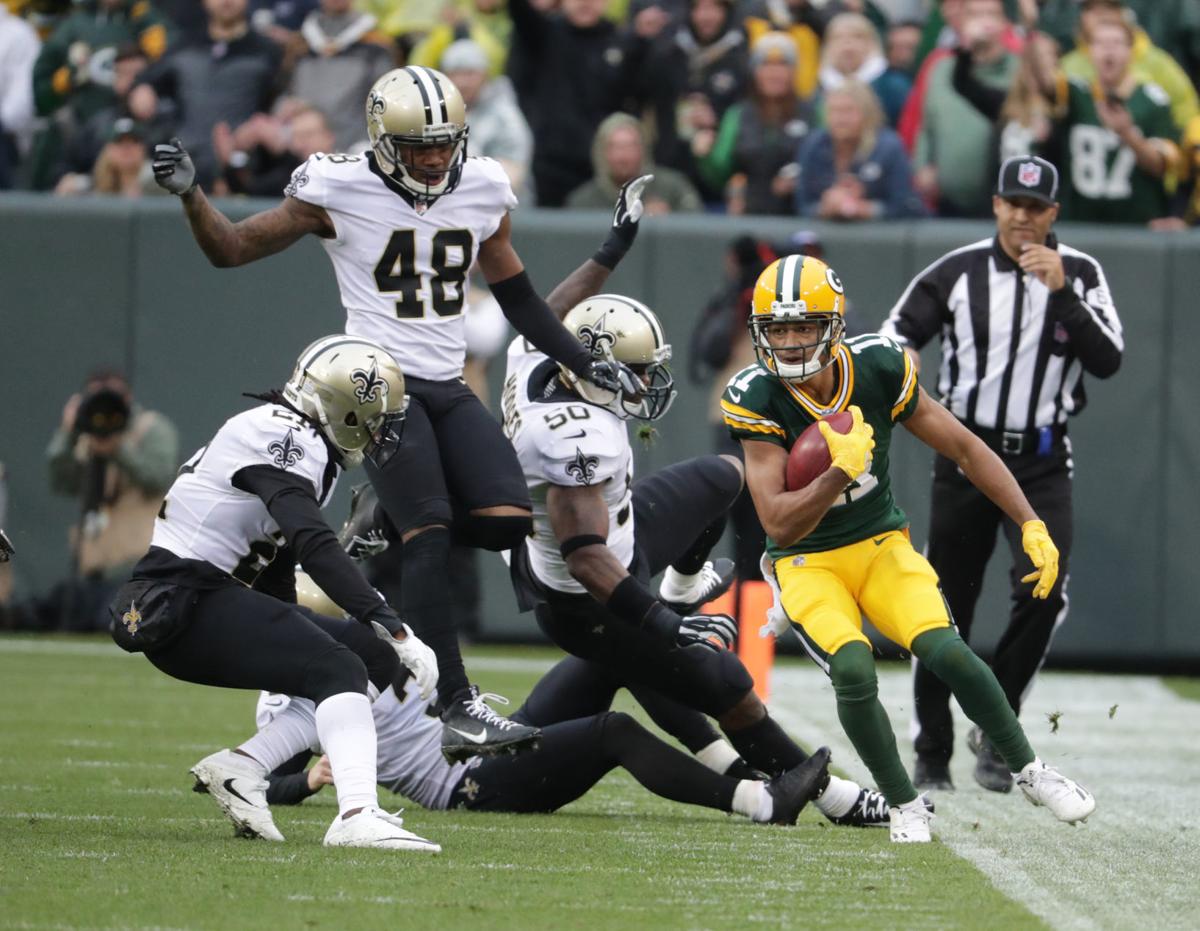 Packers' Trevor Davis averaged 22.8 yards per kick return during the 2017 season — the best of his three NFL seasons. 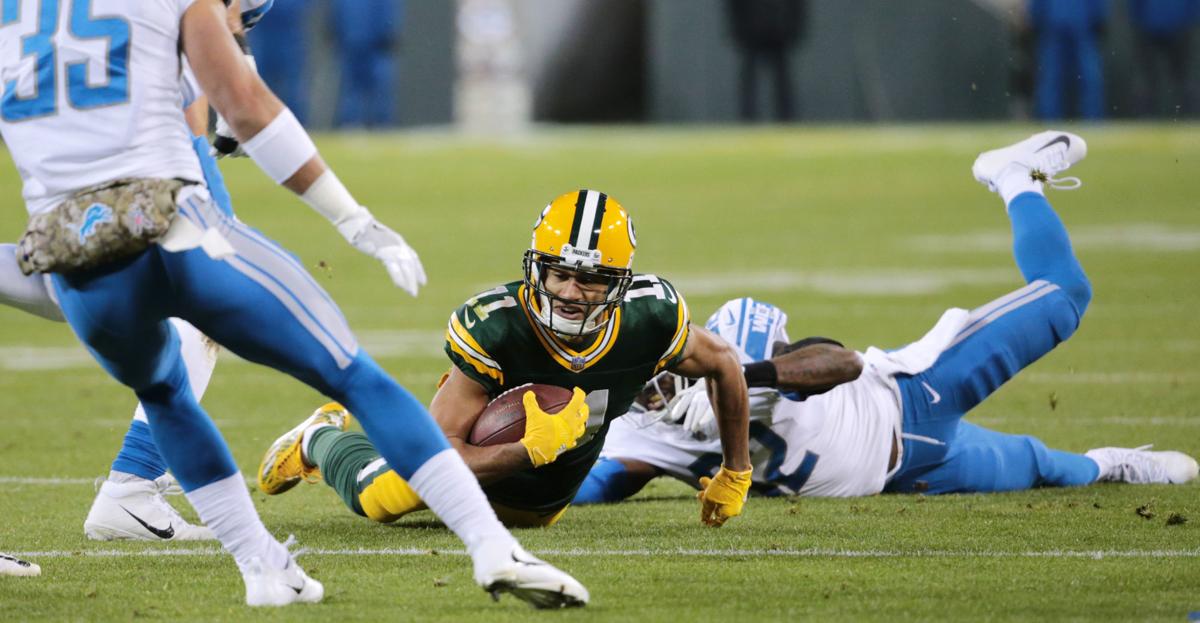 Packers' Trevor Davis is tackled after a short reception against the Detroit Lions in 2017. He has eight career receptions for 94 yards and a touchdown.

One, get the “Canada” stamp on his passport, since he’d never been across the United States’ northern border before.

“My goal,” Davis said, “is to show up on film every single play.”

Truth be told, he almost did. While the bizarre game was played on a truncated 80-yard field because of turf issues in the end zones, that didn’t seem to bother Davis a bit. He caught five passes for 78 yards, including a 13-yard touchdown, he gained 18 yards on an end around, and he picked up 17 yards on a punt return. He probably would have done something good on a kickoff return, too, had they not played the game without kickoffs because of the shortened field.

It was precisely the kind of performance Davis hoped to have — and probably needed to have after missing two weeks of practice with a stinger sustained during a joint practice with the Houston Texans on Aug. 5.

“It was just cool to see him carry over from practice to the game,” Packers coach Matt LaFleur said. “He’d been out for awhile now, so we gave him a decent amount of plays. (Plus) he was playing on special teams. I think you have to get him back into football shape, because it looked like he started getting a little tired toward the end there.

“But, shoot, when his number was called, he made plays. That’s what we’re going to continue to ask from him, but he answered the bell. He did a nice job.”

While Davis may not have completely sealed the No. 5 receiver spot behind Davante Adams, Geronimo Allison, Marquez Valdes-Scantling and Jake Kumerow with his performance, he certainly jump-started his quest entering Thursday night’s preseason finale against the Kansas City Chiefs at Lambeau Field. The Packers will have to trim the roster from 90 to 53 players by 3 p.m. Saturday, and it’s hard to imagine Davis not being on the squad.

For a guy who missed virtually all of last offseason and then nearly all of the actual season because of a recurring hamstring injury, Davis caught the coaches’ attention with strong play during organized team activity practices and minicamp in the spring. He parlayed that into a strong start in training camp before his injury.

“The thing about Trevor is he’s actually had a good camp. He was doing some really good things in OTAs, and obviously it set him back when he had the (stinger) in the Houston practice,” wide receivers coach Alvis Whitted said. “But I think he made a case for himself by the way he came out and made plays, and at the end of the day that’s what it’s all about.

“When your opportunity comes, just going out and making a play — that’s what he did for the most part. He did it on end-arounds, he did it in the passing game, blocking very well. I just think he’s continually showing people that it’s important to him. He’s going to continue to do well this last game, I think, with the opportunities given to him. He just has to make the most of them when he’s out there.”

The 26-year-old Davis, who was a 2016 fifth-round pick and is entering the fourth and final year of his rookie contract, rarely played on offense his first three seasons and enters the Packers’ Sept. 5 season-opener against the Chicago Bears at Soldier Field with just eight career receptions for 94 yards and one touchdown. But in LaFleur’s offense, his speed — Davis ran a 4.42-second 40-yard dash coming out of the University of California — and his versatility make him an ideal fit, even though at 6-foot-1 and 188 pounds he’s not the Packers’ biggest receiver.

“I just didn’t get much opportunity (in past years). New coach, new opportunity, clean slate,” Davis said. “I’ve played every (receiver) position in this offense and I know every position in this offense right now. Shifty routes, as well as intermediate routes and using my speed on deep routes. It’s having that versatility that allows them to put me in the offense wherever need be.

“For the most part, it’s just that I can be plugged into everything. It’s not that I’m just a reverse guy, play-action (downfield) guy. I can run any route and do anything. Different offenses put you in different positions to make plays. it’s a good fit for me right now and I’m making the best of it.”

Add to that his return skills and tackling abilities on special teams coverage units, and Davis certainly seems to have the edge in a crowded receiver field.

“I’ve had a lot of reps doing all those things. So having that (special teams experience) in my back pocket definitely helps,” Davis said. “But I feel like I always have something to prove. If I was in my fifth, sixth, seventh year, it wouldn’t matter to me. I come out here the same way and compete, and not feel like anything’s solidified — ever.

“We know that there’s 31 other teams looking at what we’re doing out there and if you can’t be here, you’re most likely putting things on film that’ll get you to somewhere else. At the end of the day, there’s only so many receivers they can keep. But that’s not something we can control.”

Who's in? Who's out?: Packers GM Brian Gutekunst faces challenging calls as final cuts loom

GREEN BAY — While last year was his first end-of-training-camp roster reduction as a general manager, Brian Gutekunst has been part of the Gre…

The safety is waived with a non-football illness designation — reportedly hyperthyroidism.

Matt Nagy's background under Andy Reid suggests the Bears will be more committed to the ground game and more successful.

‘Risk/reward wasn’t worth it’: Matt LaFleur went with his ‘gut’ in sitting Aaron Rodgers, starters

Packers coach Matt LaFleur planned to play Aaron Rodgers Thursday, until he saw that Raiders coach Jon Gruden wasn’t playing any of his first-line guys and the turf at IG Field.

The Raiders earned a bizarre 22-21 preseason victory over the Packers Thursday night on a field that was shortened to 80 yards over concerns about player safety.

Mason Crosby, 34, is competing with Sam Ficken to keep the job he's had as Green Bay kicker since 2007.

A police report says Moore was driving in the village of Hobart on Friday when his Mercedes Benz spun out and crossed the grass median on State Highway 29, colliding with the oncoming truck.

Despite cooling off after hot start to camp, Packers still believe Rashan Gary is ‘going to be a dangerous man’

The Packers think Gary, their top draft choice this year, can be an impact player on the defense.

Lane Taylor works to be opening-day starter — for Packers, or someone else

“I thought it was pretty disgusting. ... I thought it would've been more of a standing-ovation type thing and a thank-you than boos," Rodgers said.

Packers swing tackle Alex Light might have gone undrafted, but his athleticism for his size makes him a good fit for Matt LaFleur’s outside-zone run-blocking scheme.

Second-year inside linebacker Oren Burks avoided a major injury when he only partially tore his left pectoral muscle in Green Bay's preseason opener vs. the Texans Aug. 8.

The Green Bay Packers closed out the preseason with a 27-20 win over the Kansas City Chiefs on Thursday night at Lambeau Field in Green Bay.

On a night dedicated to keeping the starters safely stashed on the sideline and giving the young players on the bubble one last chance to make their case for a roster spot, the Green Bay Packers accomplished what they set out to do Thursday night in their 27-20 preseason-ending victory over the Kansas City Chiefs at Lambeau Field.

Packers' Trevor Davis averaged 22.8 yards per kick return during the 2017 season — the best of his three NFL seasons.

Packers' Trevor Davis is tackled after a short reception against the Detroit Lions in 2017. He has eight career receptions for 94 yards and a touchdown.