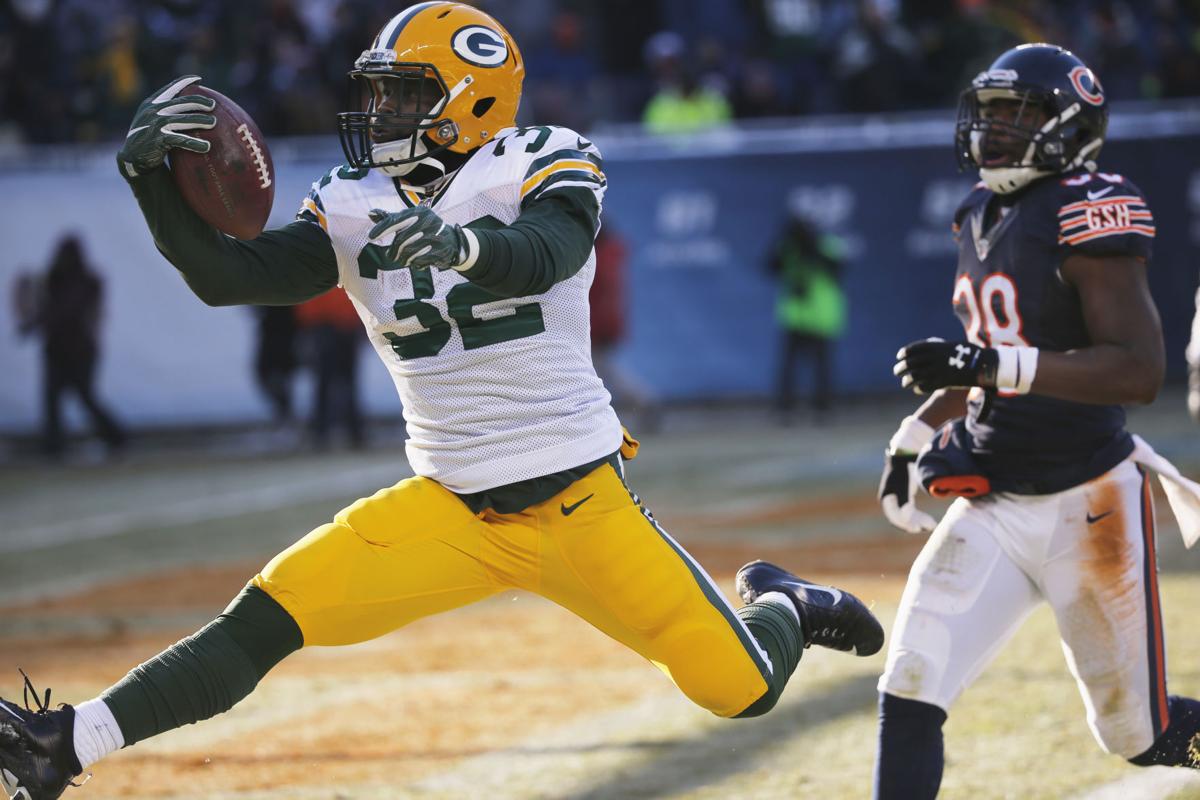 Christine Michael celebrates his 43-yard touchdown run during the third quarter of the Packers' 30-27 win over the Bears on Dec. 18 in Chicago. 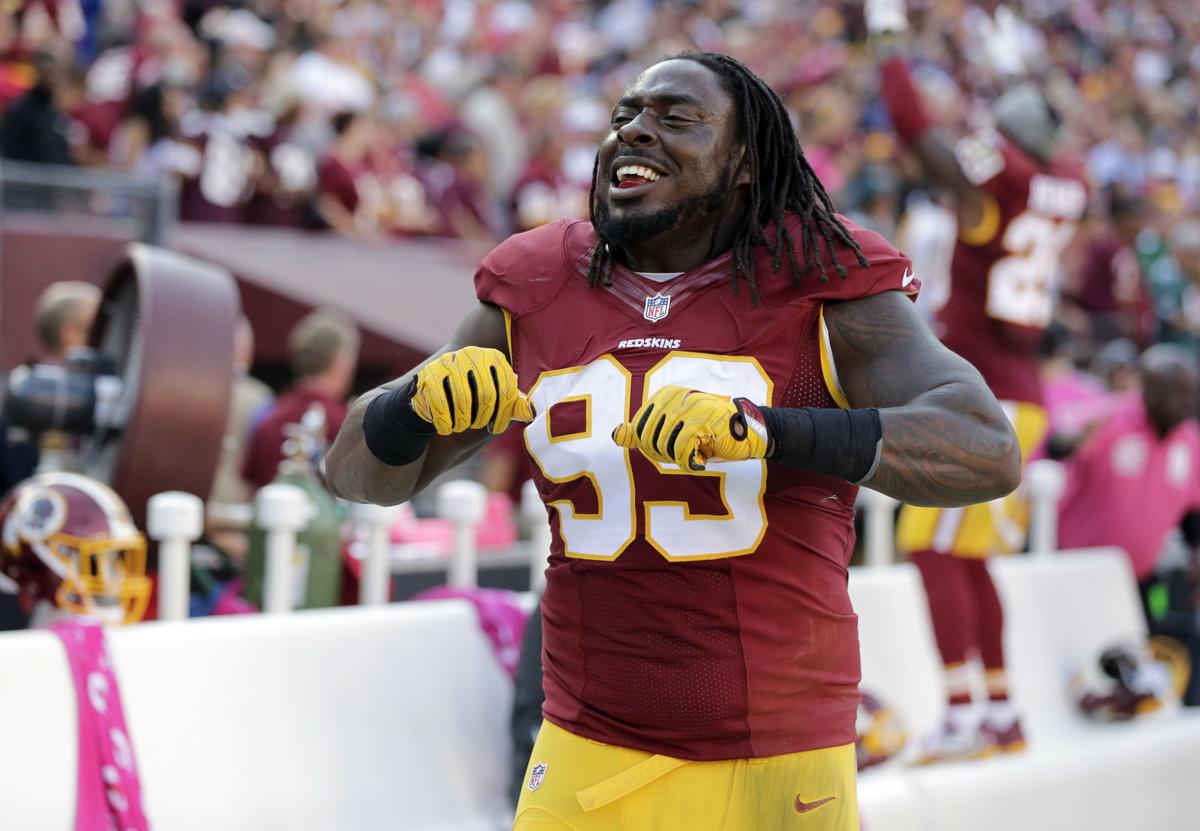 Ricky Jean Francois spent the past two seasons with the Redskins.

Think of the Green Bay Packers general manager hitting the free-agent equivalent of the clearance racks at Kohls, armed with his 30 percent off coupon and some Kohls cash he earned from his two tight end splurge of a couple weeks ago.

The Packers re-signed one of those bargain players Wednesday — running back Christine Michael, who spent the second half of last season with the team — while also bringing in defensive lineman Ricky Jean-Francois and offensive tackle Byron Bell in for visits on Wednesday. ESPN reported Bell's visit, while Jean-Francois posted his plans to visit Green Bay on his Twitter account and a source confirmed that the visit had been scheduled.

Michael, who finished last season with the Packers after they claimed him on waivers from the Seattle Seahawks, visited with the team on Wednesday after not drawing much interest on the open market.

With Eddie Lacy having departed for Seattle in free agency and the Packers having released longtime No. 2 running back James Starks last month, the only running back on the roster before Michael came to terms Wednesday converted wide receiver Ty Montgomery.

The 5-foot-10, 221-pound Michael, 26, carried 31 times for 114 yards, including a 42-yard touchdown against Chicago, in six games with the Packers last year. Drafted one pick after Lacy in the second round in 2013, Michael should benefit from a full offseason in the Packers’ system, as coach Mike McCarthy was excited about his change-of-pace style when he arrived in November.

The Packers did not officially announce Michael's signing, but he posted a photo to his Instagram account hinting he was returning to the team, and a league source confirmed that was the case.

With Michael back in the fold, the Packers' only remaining unrestricted free agent is veteran long-snapper Brett Goode.

It was around this time last spring that Thompson struck a deal with tight end Jared Cook, who’d been released by the St. Louis Rams. Cook, who got a one-year, $2.75 million deal, went on to become one of quarterback Aaron Rodgers’ go-to receivers and had a crucial late-game catch to set up Mason Crosby’s last-second game-winning field goal in the Packers’ NFC Divisional Playoff win at Dallas.

Bennett got a three-year, $21 million deal as an unrestricted free agent; Kendricks, a Milwaukee native and former University of Wisconsin standout, got a two-year, $4 million deal after being cut by the now-Los Angeles Rams.

The Packers also signed cornerback Davon House, who spent the past two years with the Jacksonville Jaguars after four seasons in Green Bay, to a one-year, $2.8 million deal after he was cut by the Jaguars.

Thompson acknowledged the obvious at the NFL combine in Indianapolis earlier this month, saying he isn’t one to dive into the early, free-spending days of free agency. But historically, Thompson has been able to find some later bargains, when he has delved into free agency.

“I think it’s like anything. There’s a process to it,” McCarthy said at the combine. ‘At the end of the day, we’re all aware of what the results are. We’re involved, we’re working through it. We’ll see how it shakes out this year.”

The 6-5, 340-pound Bell, 28, missed all of last season with a dislocated ankle suffered during offseason organized team activity practices and spent the year on the Tennessee Titans’ injured reserve list. Before that, though, he started all 16 games — at three different positions — for the Titans, and in four years with the Carolina Panthers, he played in 78 career games, with 72 starts. Bell entered the league as an undrafted rookie free agent from New Mexico in 2011.

In 2015, Bell started seven games at left guard, eight games at right tackle and the regular-season finale at left tackle. Having lost Pro Bowl right guard T.J. Lang to a three-year, $28.5 million deal with the Detroit Lions, the Packers need to replace Lang and don’t have a clear-cut heir apparent on the roster. The Packers also lost versatile backup JC Tretter, who signed with the Cleveland Browns to become their new starting center.

The 6-3, 313-pound Jean Francois, 30, entered the league with the San Francisco 49ers as an undrafted free agent from LSU and spent four seasons with the 49ers before signing a four-year, $22 million free-agent deal ($8.5 million guaranteed) with the Indianapolis Colts in 2013. The Packers reportedly had an interest in him before he signed with the Colts that spring.

Jean Francois was cut by the Colts after two years, despite him starting 23 of the 26 games he played for them over two seasons. He caught on with the Washington Redskins in 2015, getting a three-year, $9 million deal ($4 million guaranteed). Washington released him earlier this week after two seasons, during which he played in all 32 games.

Jean Francois would provide depth on a defensive line that will be without veteran nose tackle Letroy Guion for the first four games of the 2017 season because of his suspension for violating the NFL’s policy on performance-enhancing drugs. Guion restructured his deal after news of the suspension broke, but Jean Francois would give the Packers another option if they choose to move on.

Jason Wilde covers the Packers for ESPN Wisconsin. Listen to him with former Packers and Badgers offensive lineman Mark Tauscher weekdays from 9 to 11 a.m. on "Wilde & Tausch" on 100.5 FM ESPN Madison.

Jean Francois, 30, is a nine-year NFL veteran who spent the past two seasons with the Washington Redskins.

Christine Michael celebrates his 43-yard touchdown run during the third quarter of the Packers' 30-27 win over the Bears on Dec. 18 in Chicago.

Ricky Jean Francois spent the past two seasons with the Redskins.