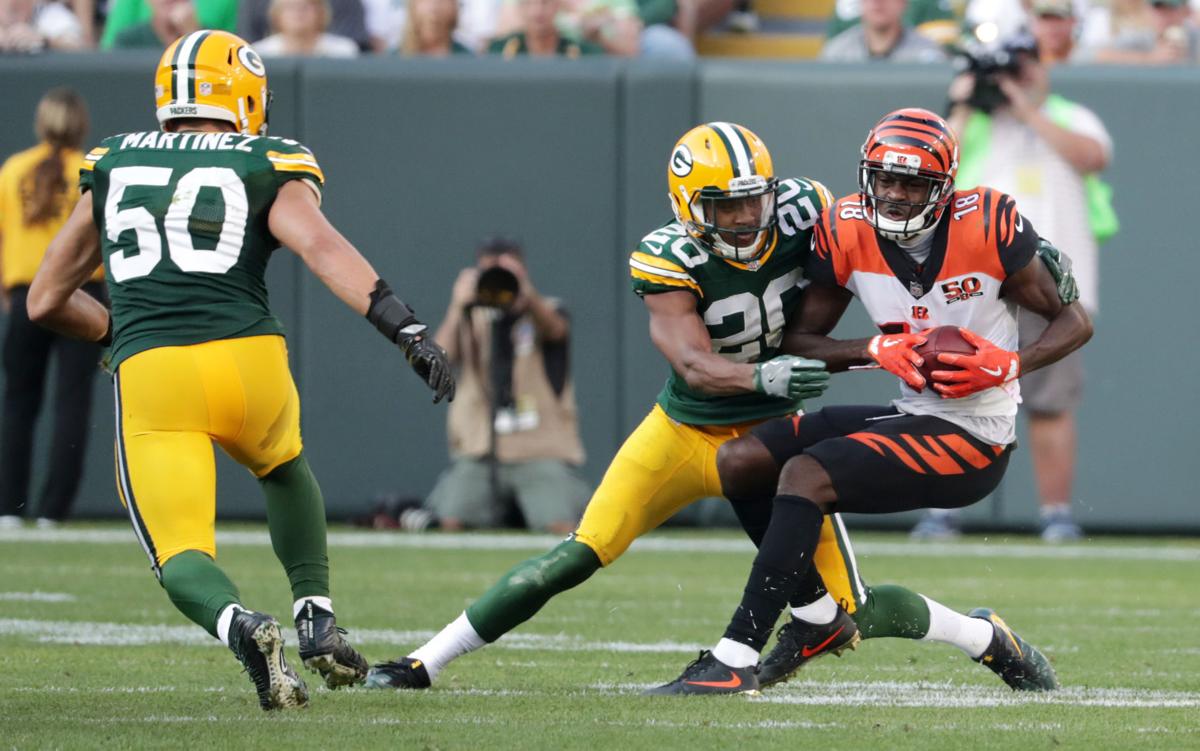 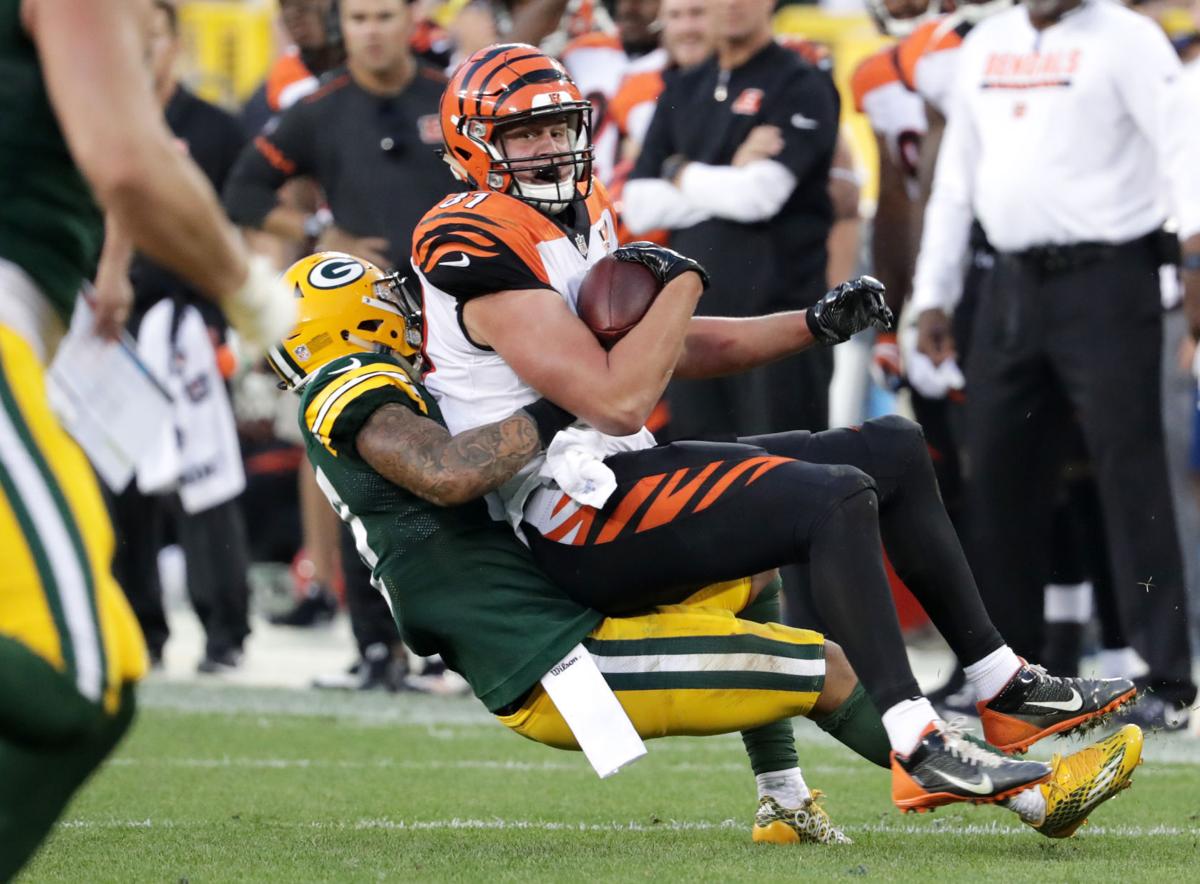 GREEN BAY — There’s one impossible-to-miss attribute that rookies Kevin King and Josh Jones share: They do not lack for confidence.

And so, after the Green Bay Packers’ two youngsters led their defense to a 27-24 overtime victory over the Cincinnati Bengals Sunday at Lambeau Field — King by containing Bengals star receiver A.J. Green; Jones by being all over the field, including in the Cincinnati backfield taking down quarterback Andy Dalton twice — their body-language reactions were the same. And hardly surprising.

“It’s satisfying to know that your preparation paid off, but this is a long season,” Jones said after registering a team-high 12 tackles, two sacks and three total tackles for loss. “This is just one game. I expect to continue to do that throughout this season.”

Asked how he reacted when the coaches told him that he’d be matching up with Green, King said his response was two words: “Thank you.”

King, the first of two second-round picks (No. 33) out of Washington, earned his first NFL start with how he played last week at Atlanta, when he got the call after third-year cornerbacks Damarious Randall and Quinten Rollins struggled. With veteran Davon House (quadriceps) not playing Sunday, defensive coordinator Dom Capers gave King the task of covering Green, the six-time Pro Bowler.

Green did catch 10 passes for 111 yards and a touchdown — a 10-yarder that came against zone coverage, not against King — but his longest reception went for 20 yards and he didn’t deliver any of the momentum-shifting, game-breaking plays the Packers’ secondary frequently allows against top-flight receivers. King would appear to have played well enough to merit staying in the starting lineup for Thursday night’s game against the Chicago Bears — and beyond.

“I think I did well. I think I did well,” King replied when asked how he thought he fared. “Like every game we just want to improve. It’s a quick turnaround on Thursday. Good plays, bad plays, you’ve got to move on to the next.”

Jones, who went 28 picks after King at No. 61 out of North Carolina State, was impressive during the offseason but didn’t play a single snap on defense in the Sept. 10 opener against Seattle. He saw his first defensive action last week when he replaced an injured Kentrell Brice as one of the traditional safeties in the Packers’ Nitro package, with veteran safety Morgan Burnett playing at inside linebacker.

On Sunday, Capers employed a four-safety look – Ha Ha Clinton-Dix and Marwin Evans at traditional safety, Burnett mostly in the slot and Jones as the hybrid inside linebacker – in part out of necessity with inside linebacker Jake Ryan (concussion/hamstring) out, and in part because the Bengals don’t utilize a lot of three- and four-receiver spread sets. Capers sent Jones and Burnett on several blitzes from opposite sides of the formation and on both of Jones’ sacks, the two basically met at Dalton.

“He was fantastic, he really was. It’s fun to watch him play and get confident,” Packers quarterback Aaron Rodgers said. “For young players like that, and for Josh especially not having a ton of reps (before Sunday). With Jake Ryan down today, we had to play a bunch of safeties, and he a got a lot of action and he made the most of it.

“He was huge for us with the sacks, with the stops, with the coverage. I’m really happy for him. It was the stuff that we saw in training camp. We’ve seen this from him. Josh is a tough competitor, and his contribution today was vital for our success.”

Added Packers coach Mike McCarthy: “We’ve always played young players early and today’s a benefit of it. So everybody got to play, you win a tough game against a tough opponent. And that’s the benefit.”

The Green Bay Packers rallied for a 27-24 overtime win over the Cincinnati Bengals on Sunday afternoon at Lambeau Field in Green Bay.

Green Bay put together a dominant second half, overcoming a 21-7 halftime deficit in a 27-24 overtime victory that likely will reverberate well into January.

After missing the opener due to a suspension, the wide receiver comes up big with a 72-yard reception in overtime.

“On this team, we’re going to keep choosing love over hate, unity over division, and that’s what it was to us,” Aaron Rodgers said after the Packers’ 27-24 overtime win.

President Donald Trump's criticism of players who kneel during the national anthem sparked angry protests around the National Football League Sunday, as about 200 players sat, knelt or raised their fists in defiance.

Murphy, who started the opener against Seattle at right tackle and the past two games at left tackle, was able to finish the game, but had the Packers practiced Monday, he would not have been able to, according to the official injury report.

In Sunday's 23-17 victory over the Pittsburgh Steelers, Mike Glennon targeted wide receivers only four times in his 21 attempts and completed one 9-yard pass to Deion Thompson.