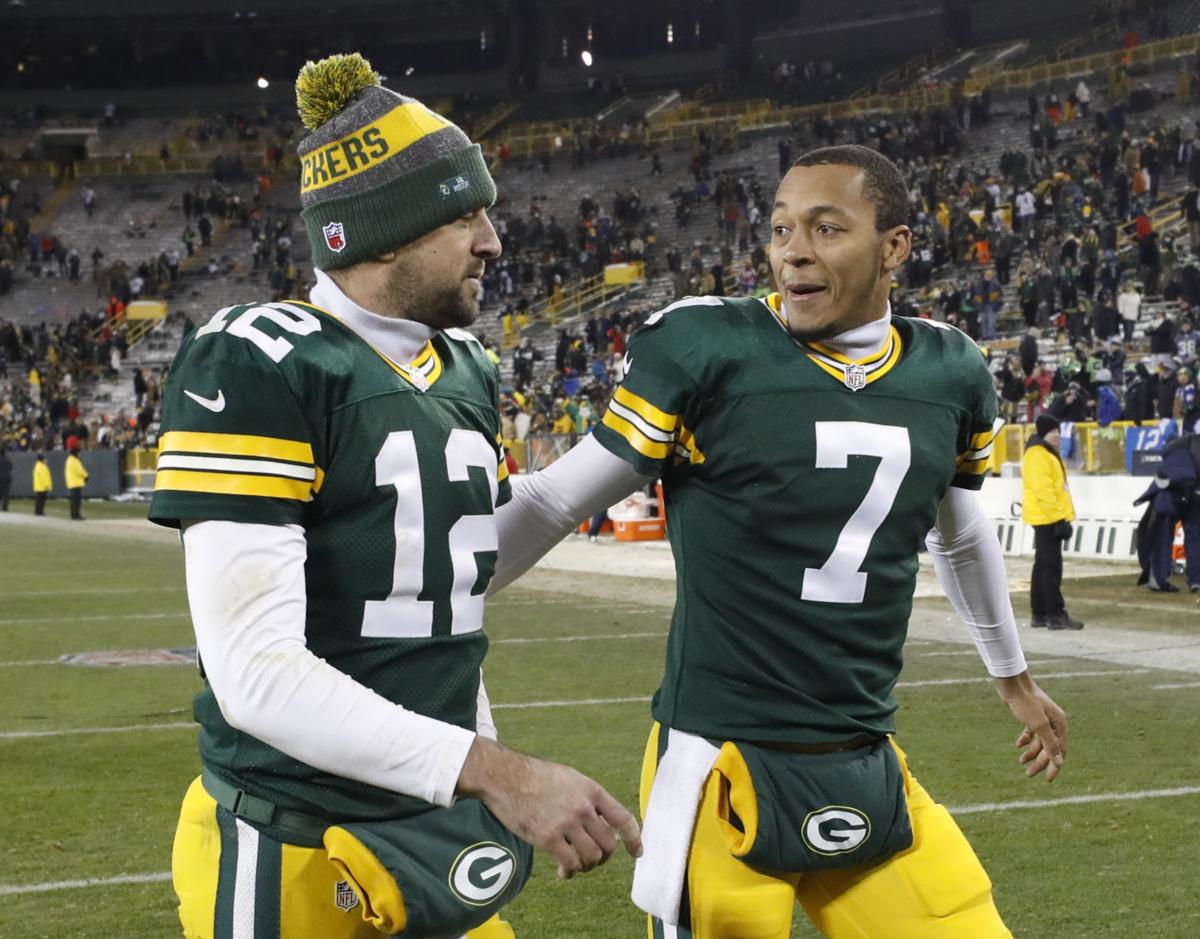 Packers backup quarterback Brett Hundley talks to Aaron Rodgers after the Dec. 11 game against the Seahawks at Lambeau Field. The Packers won 38-10. 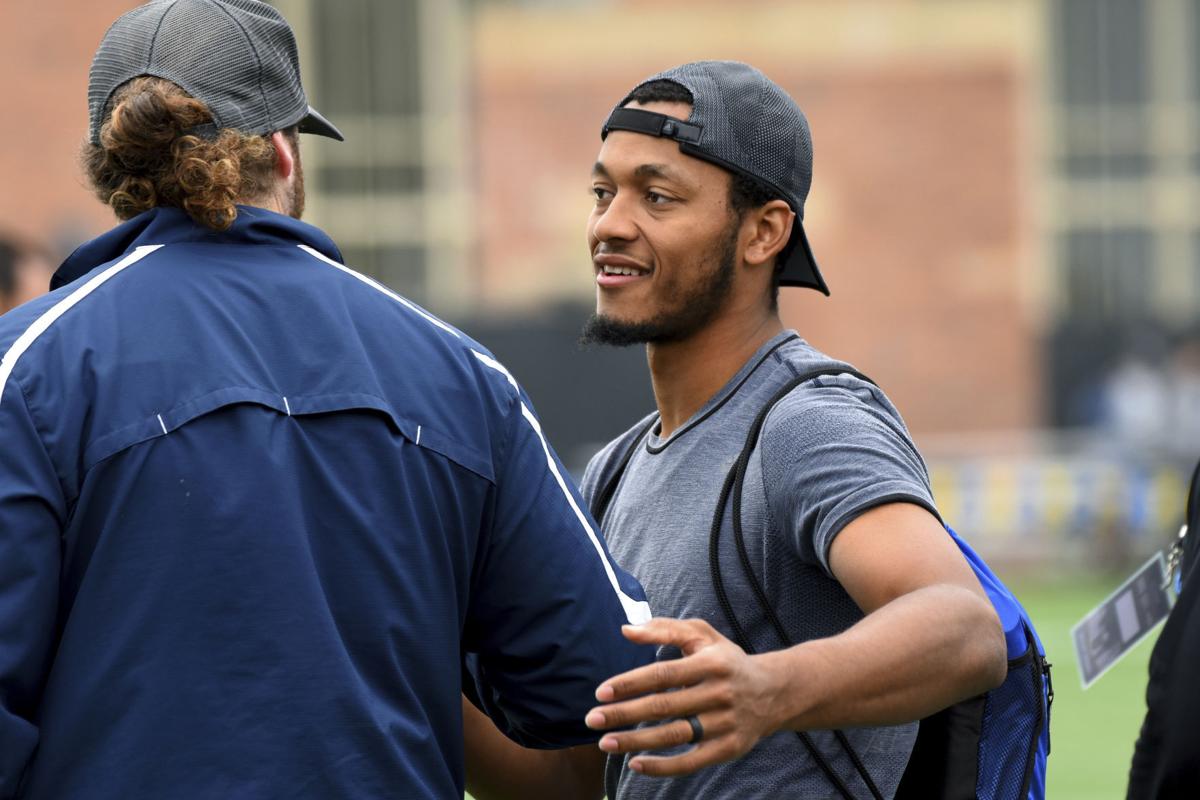 GREEN BAY — Brett Hundley has had quite a June.

Earlier this month, the Green Bay Packers No. 2 quarterback criss-crossed the country and went north of the border with his wife Dawnielle on a 33-hour, 1,700-mile trip that included a soaking at Niagara Falls to celebrate his 24th birthday a few days earlier.

Last week, he rode in a two-seat Indy car with racing legend Mario Andretti, hung out with driver Will Power and tossed a football through the passenger window of a moving pace car to promote the Kohler Grand Prix at Road America, and he hung out on pit row for part of Sunday’s race.

And — most importantly for his job as Aaron Rodgers’ backup — he got a ton of extra work during the team’s June 13 to 15 minicamp, for which Rodgers and 15 other veteran players were excused.

“These two practices are big for him obviously because he’s in the lead chair,” Packers coach Mike McCarthy said during the minicamp, which marked the end of the team’s on-field work until training camp opens on July 27. “He clearly has an (improved) understanding (of the offense). Aaron has done a great job taking him under his wing, teaching him the little things. Just the confidence he’s playing with (is obvious). He’s snapping the ball off; you can see the way he’s finishing his throws. Brett’s done a lot of good things.”

But as eventful as the past month has been, it’ll be what Hundley does in August that’ll most impact his football future.

He can’t afford to have another injury-derailed preseason like he had last summer, when an ankle injury turned what should have been a cornucopia of opportunity into a colossal disappointment, as he threw just seven passes — even with Rodgers seeing action in just one of the team’s four remaining games after the Pro Football Hall of Fame Game was canceled because of poor field conditions.

Hundley wouldn’t have played in that game anyway because of his ankle, which he re-injured in the one game he did play.

“It just makes you want to play more,” Hundley said. “I’ll actually be able to play a couple of quarters. I just can’t wait. It’s different during the season when you’re going in at the end and it’s like one or two plays or even a series, because you can’t get any rhythm. (In preseason), you can get into it. That’s what I really want to do.”

That’s what he did as a rookie, when he was the star of the exhibition games, completing 45 of 65 passes (69.2 percent) for 630 yards with seven touchdowns against just one interception (129.7 rating).

“That was just playing. Instinct,” Hundley said. “(Now) I’m getting into the next-level stuff, a higher level and understanding the whys of everything.”

The Packers had taken Hundley in the fifth round of the 2015 NFL draft after having a second-round grade on him, and his success that summer gave the team not only a capable backup for Rodgers but future trade bait in a quarterback-driven league.

The Packers had conversations during last April’s draft about dealing Hundley, and a deal reportedly came close to happening on Day 2. It didn’t, though, and Hundley knows he has more to prove before a team will invest in him. Assuming the durable Rodgers stays healthy — the two-time NFL MVP missed 7½ games in 2013 with a broken collarbone but has missed only one other game due to injury since becoming the starter in 2008 — Hundley will have to show what he can do starting with the Aug. 10 preseason opener against Philadelphia.

If he plays well, it’ll be a win-win for him and the Packers: He’ll fetch a better draft pick for the team — it’s unlikely the Packers would deal him before the midseason trade deadline; before next year’s draft would make more sense — and another club is more likely to give him the starting opportunity he craves if he performs well.

“You’d always want to be with one team, you want to retire with one team. But at the end of the day, I just want to play football,” Hundley said. “And wherever I’m called to play, that’s where I’ll play.”

And wherever that is, the Packers’ coaches believe he’ll do well.

“(He has) a lot of talent, a lot of ability in his body. He’s catching up mentally now,” quarterbacks coach Alex Van Pelt said. “He should have a fine camp moving forward, that’s what I totally expect.

“We obviously work hard to train our quarterbacks in how we think is the right way. For him to have a chance (to start), whether it be here or anywhere else, to be successful at this level, I’d take that as a pat on the back.”

Dupre, a seventh-round draft pick from LSU, made a favorable impression on coach Mike McCarthy during OTA practices and minicamp.

Packers backup quarterback Brett Hundley talks to Aaron Rodgers after the Dec. 11 game against the Seahawks at Lambeau Field. The Packers won 38-10.