GREEN BAY — A week after one of the best games of his career, Aaron Jones got off to one of his worst starts.

The Green Bay Packers third-year running back, who was the hero of last week’s victory over the Dallas Cowboys with 182 total yards from scrimmage and a franchise record-tying four touchdown runs, made two crucial mistakes during the first half of Monday night’s 23-22 victory over the Detroit Lions at Lambeau Field.

First, Jones fumbled at the end of a first-quarter run, with the Packers already trailing 10-0 but having crossed into Lions territory. The fumble, caused by defensive tackle A’Shawn Robinson and recovered by linebacker Christian Jones, led to a 22-yard Matt Prater field goal to make it 13-0.

Then, on the ensuing drive, Jones was wide open down the seam for what should have been a 33-yard touchdown pass from quarterback Aaron Rodgers — if Jones hadn’t bobbled the ball and dropped it at the Lions’ 6-yard line. 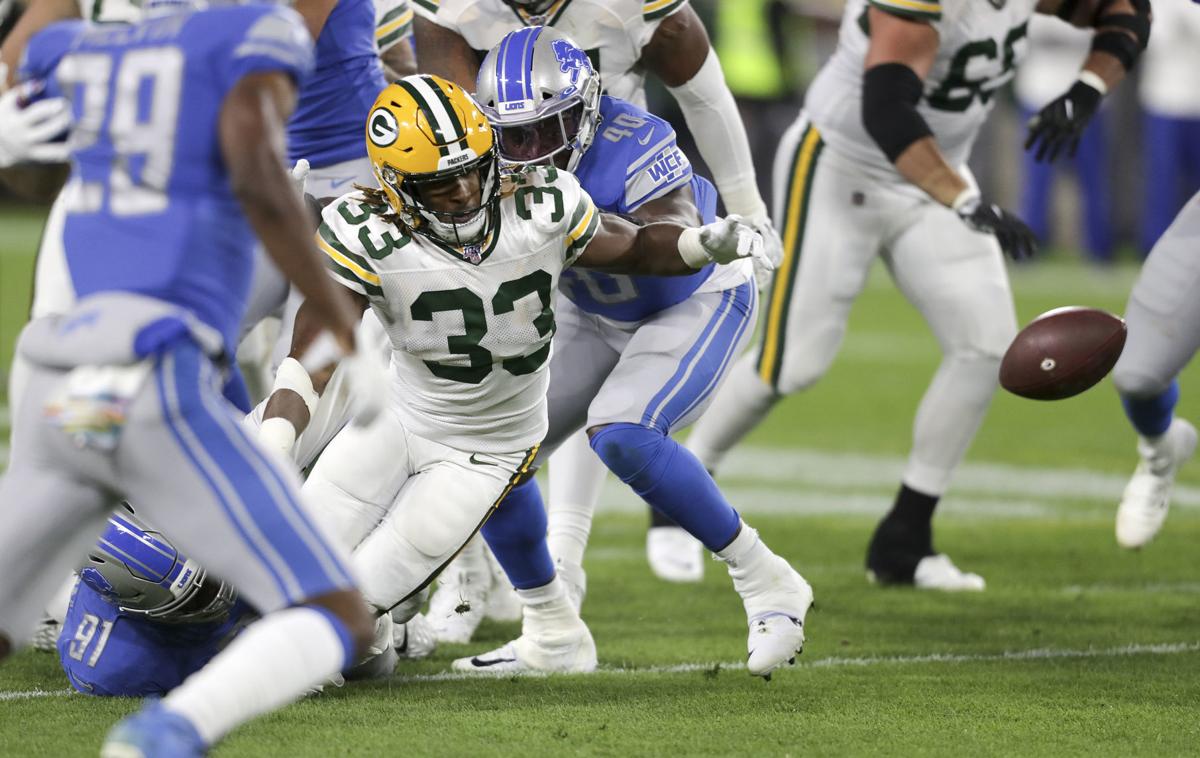 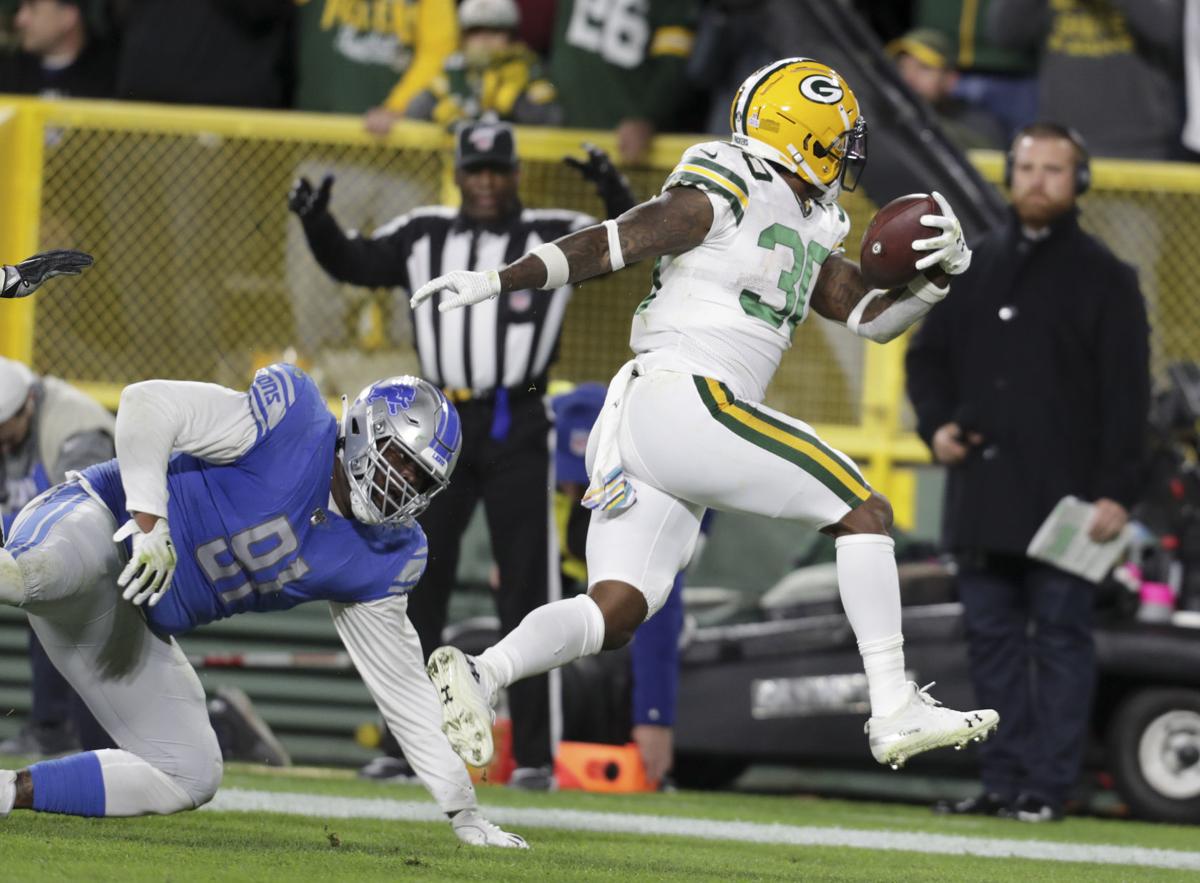 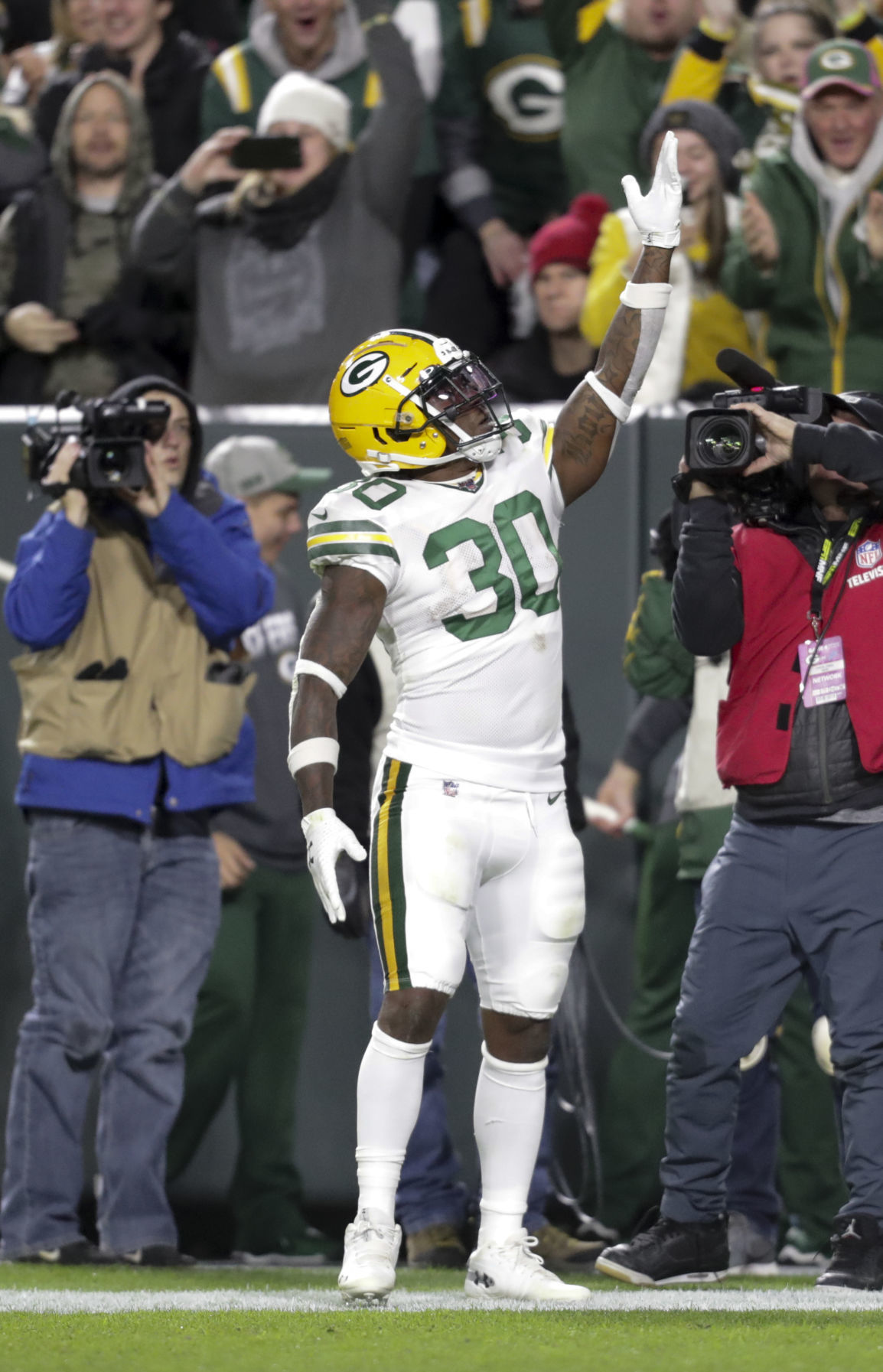 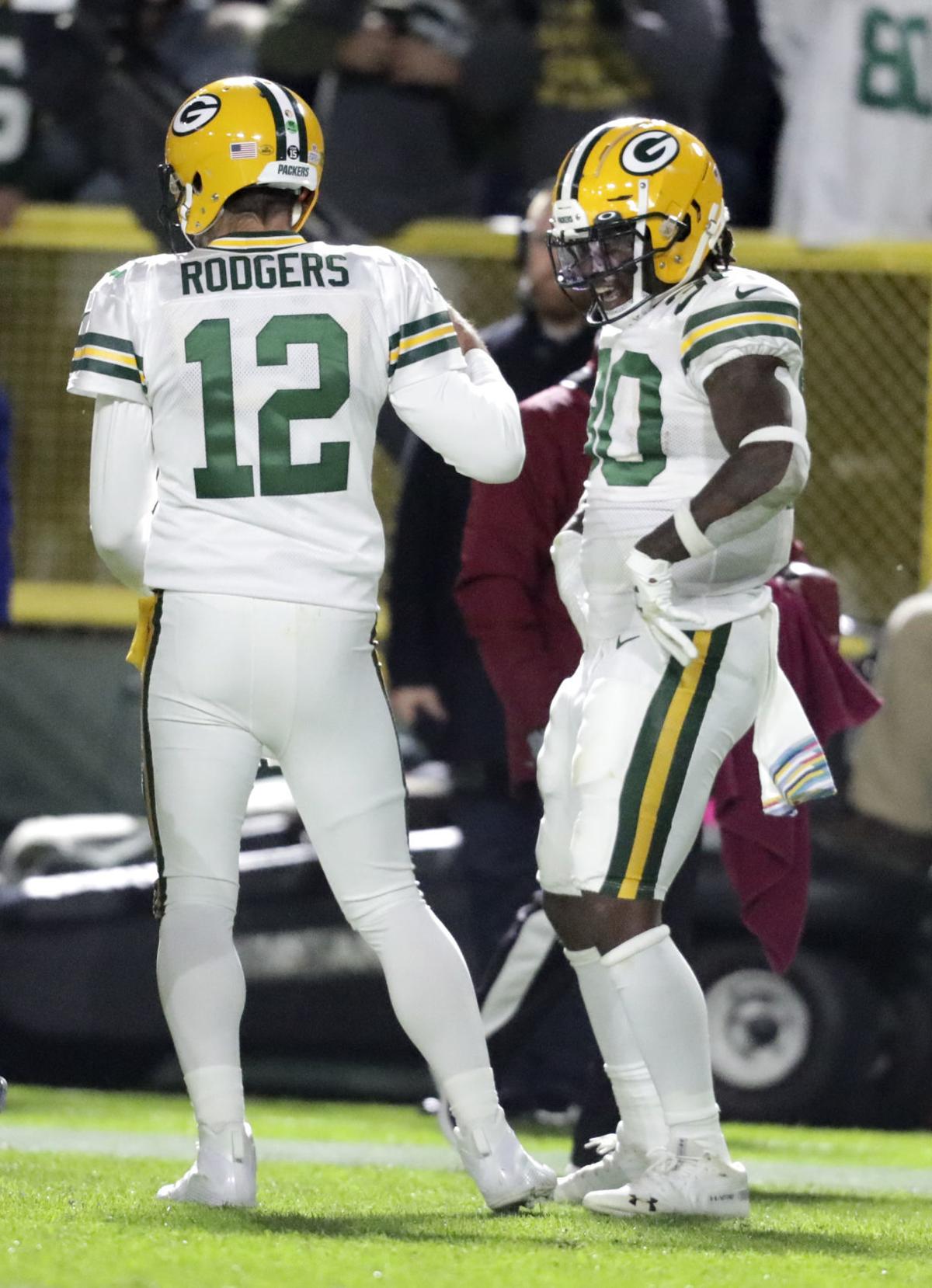 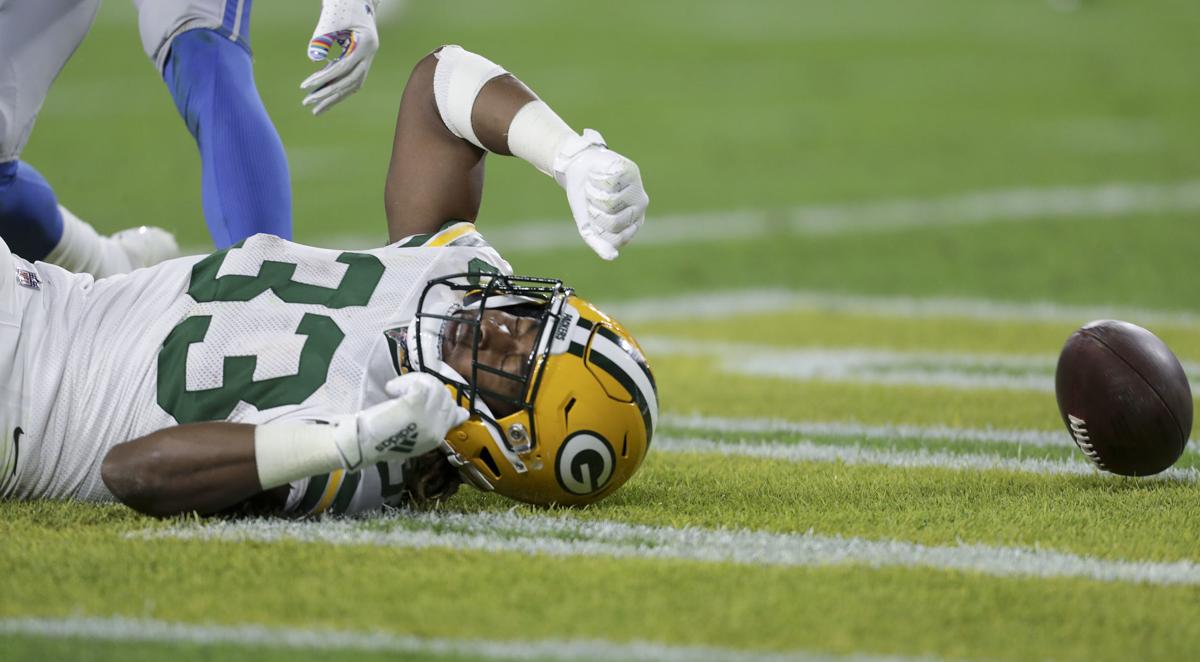 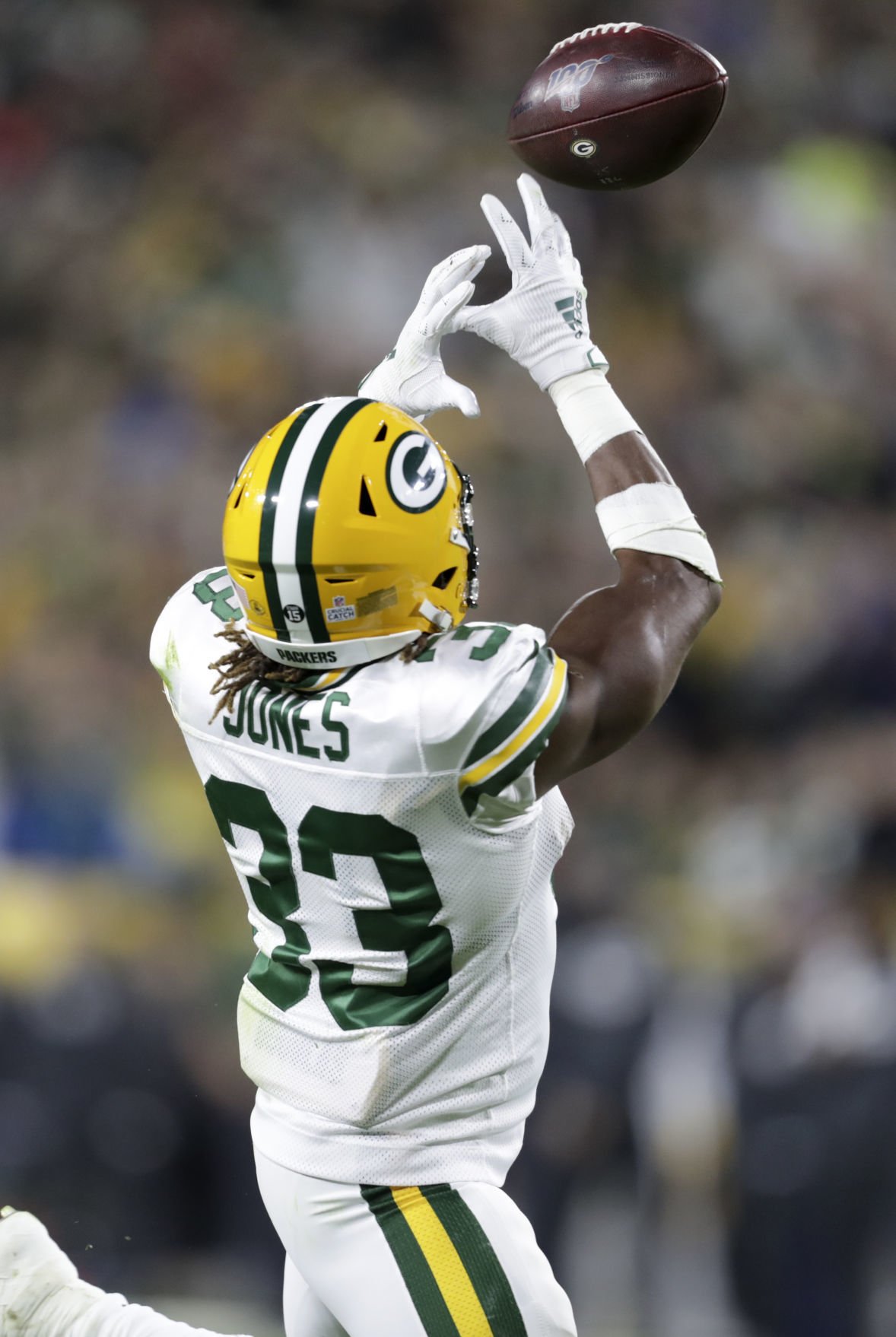 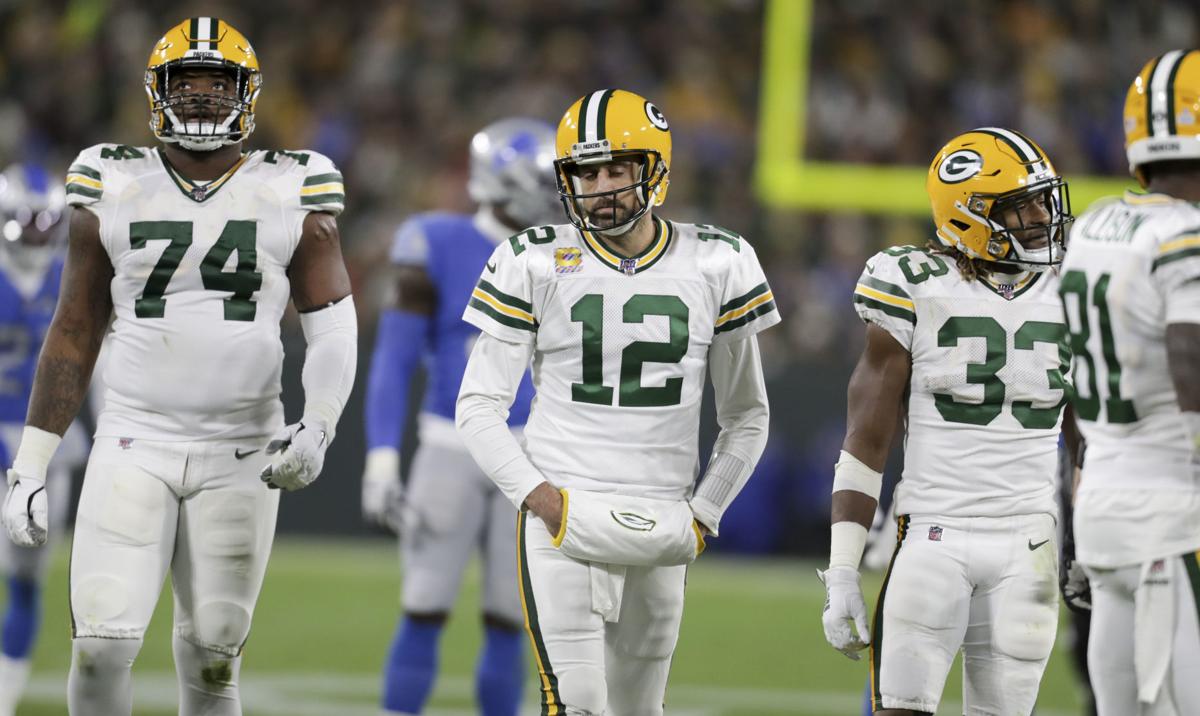 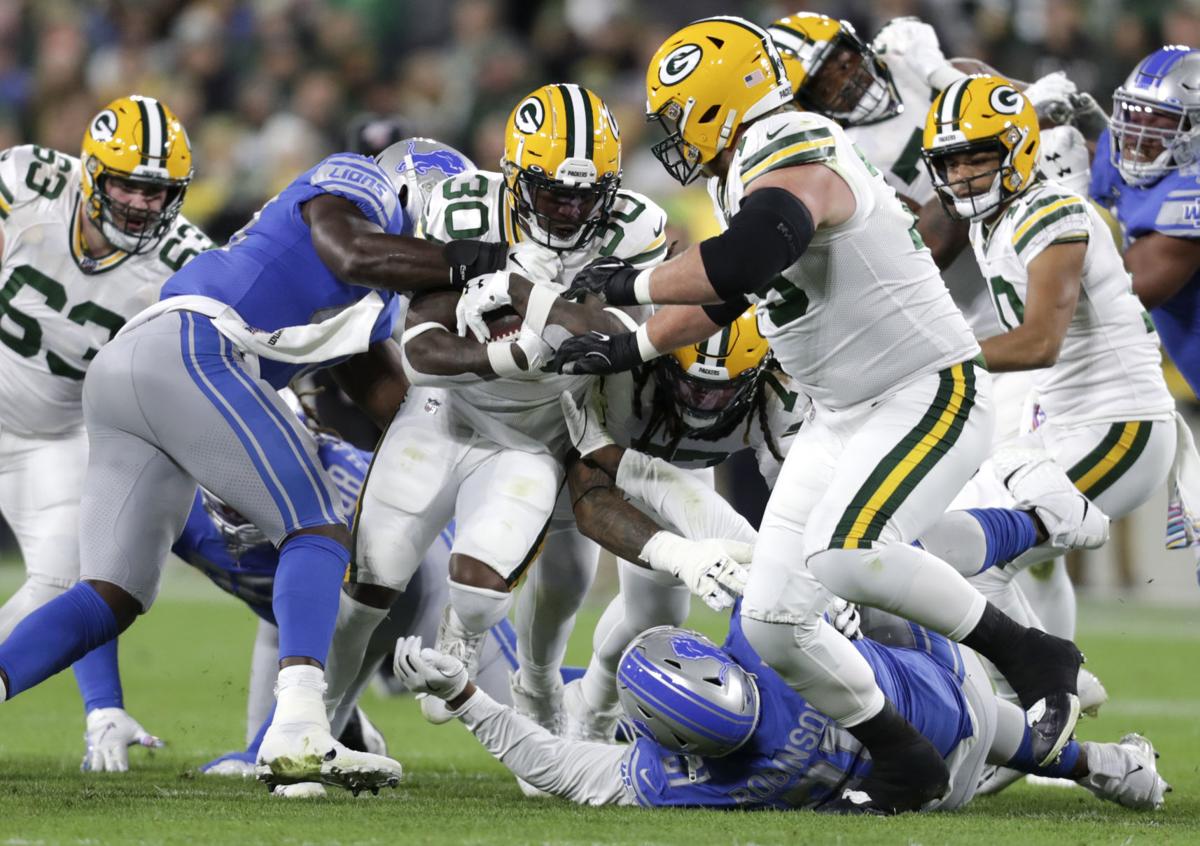 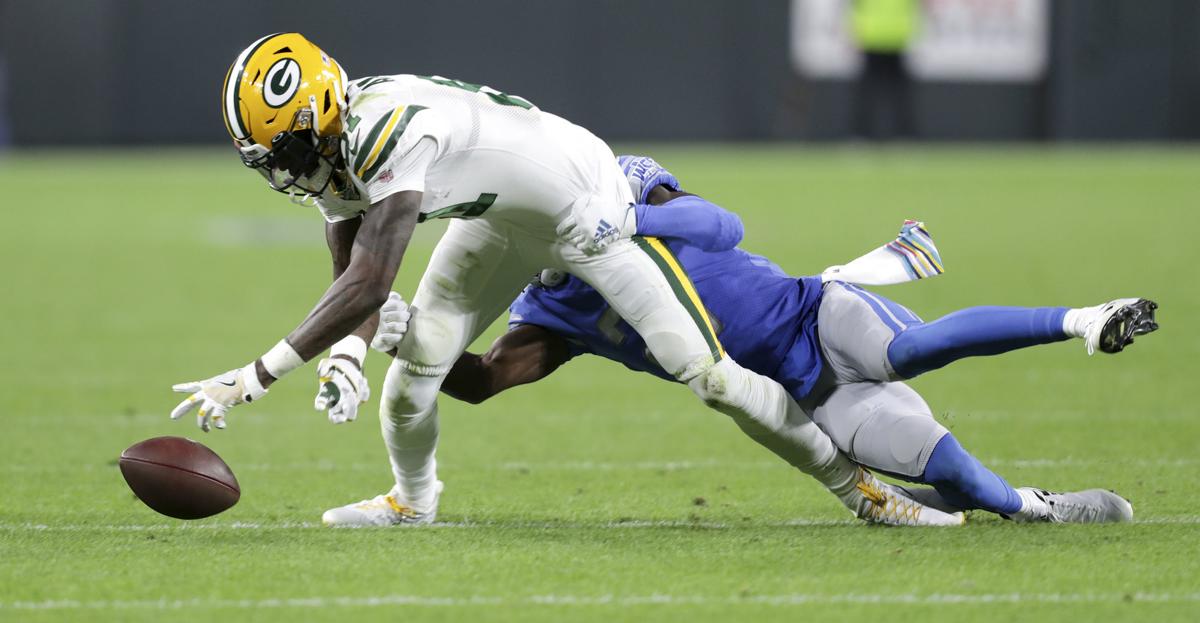 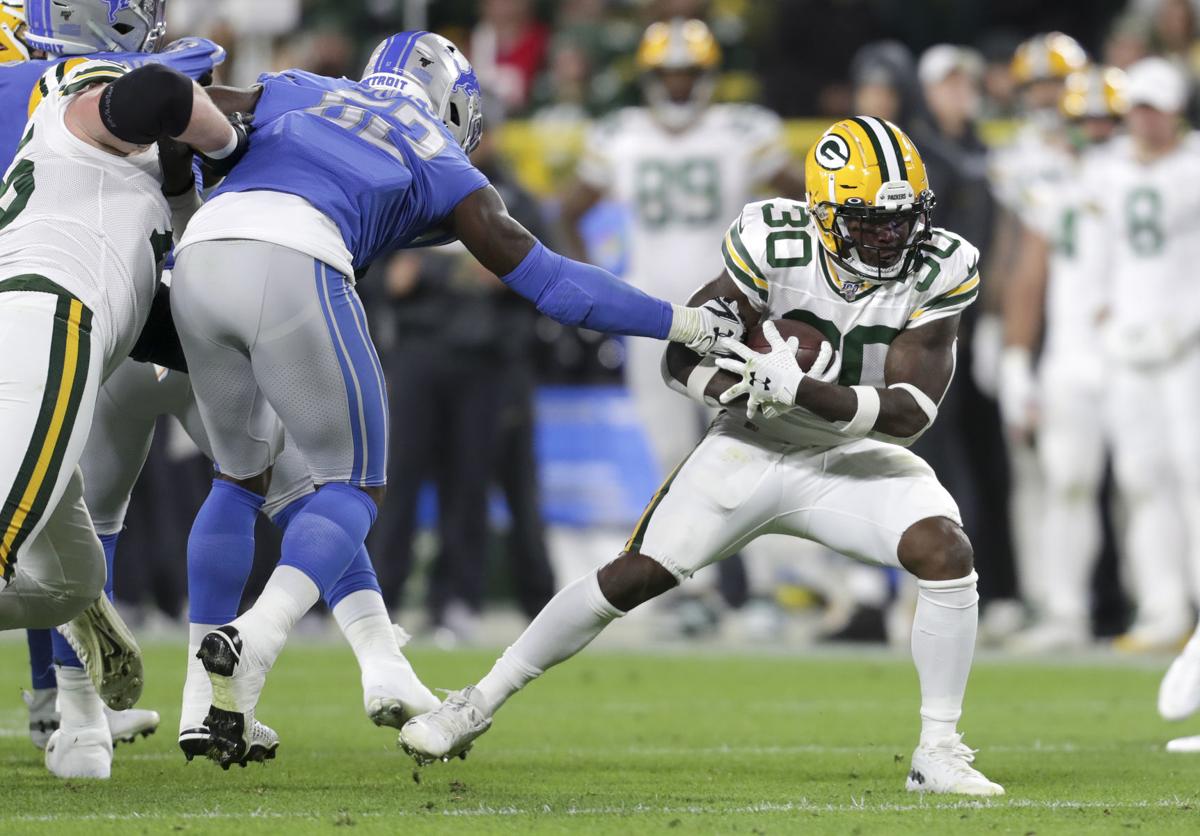 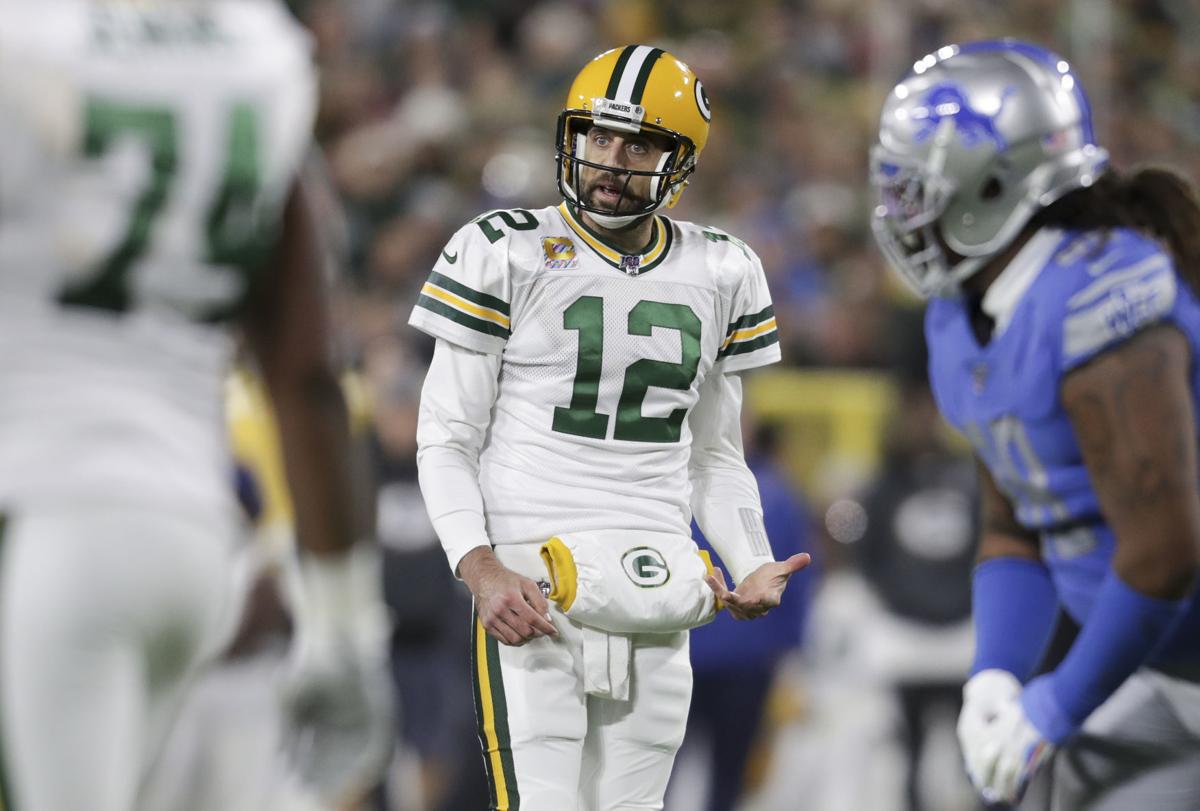 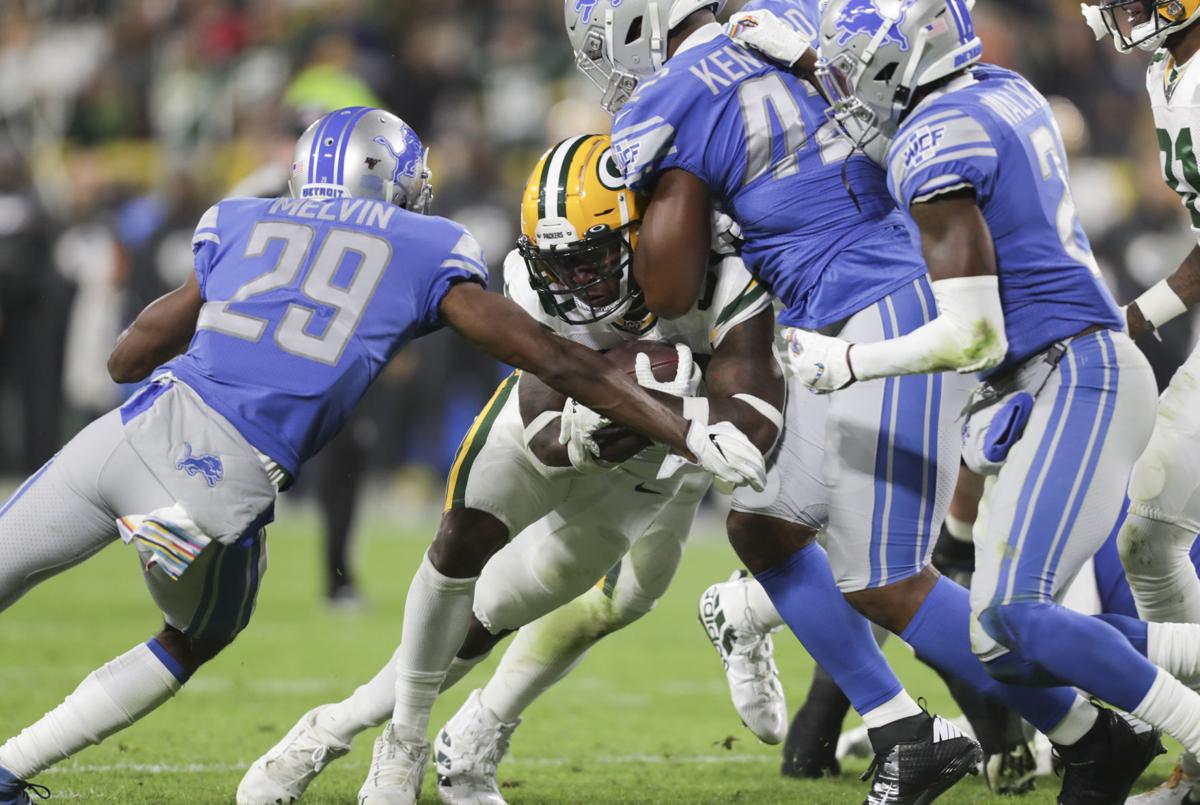 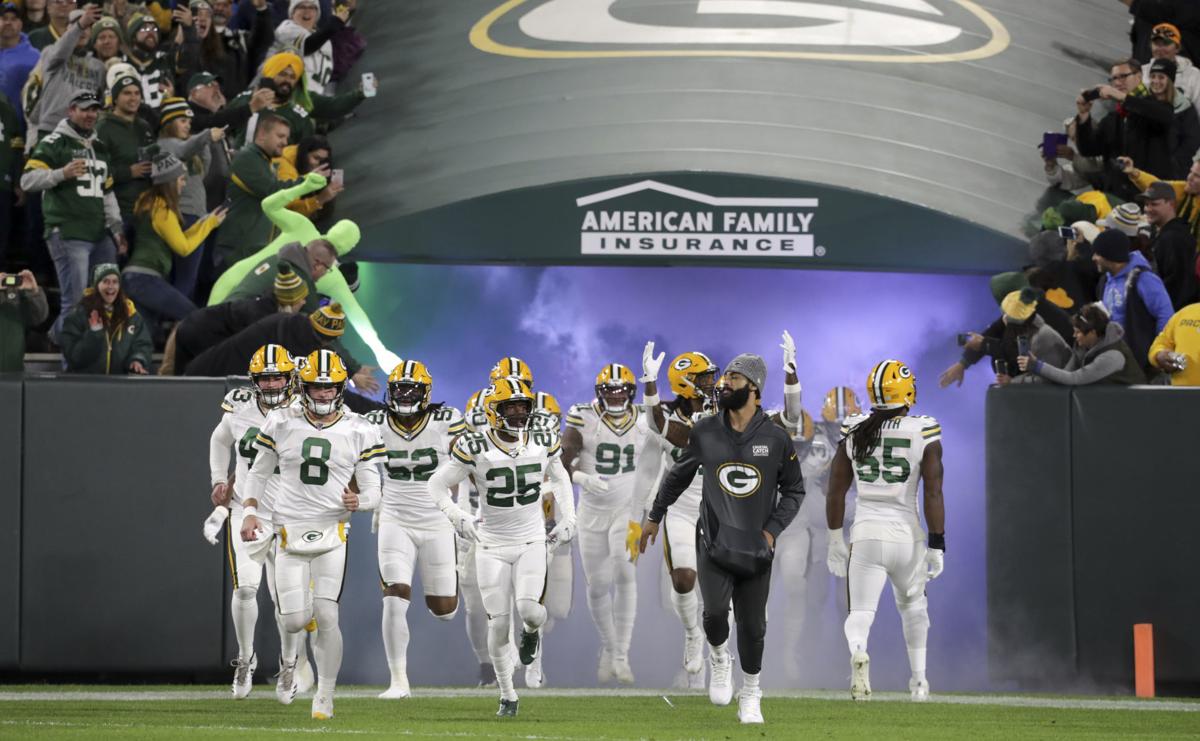 The Packers run out of the tunnel onto the field during the pregame introduction. The Green Bay Packers hosted the Detroit Lions Monday, Oct. 14, 2019 at Lambeau Field in Green Bay. STEVE APPS, STATE JOURNAL 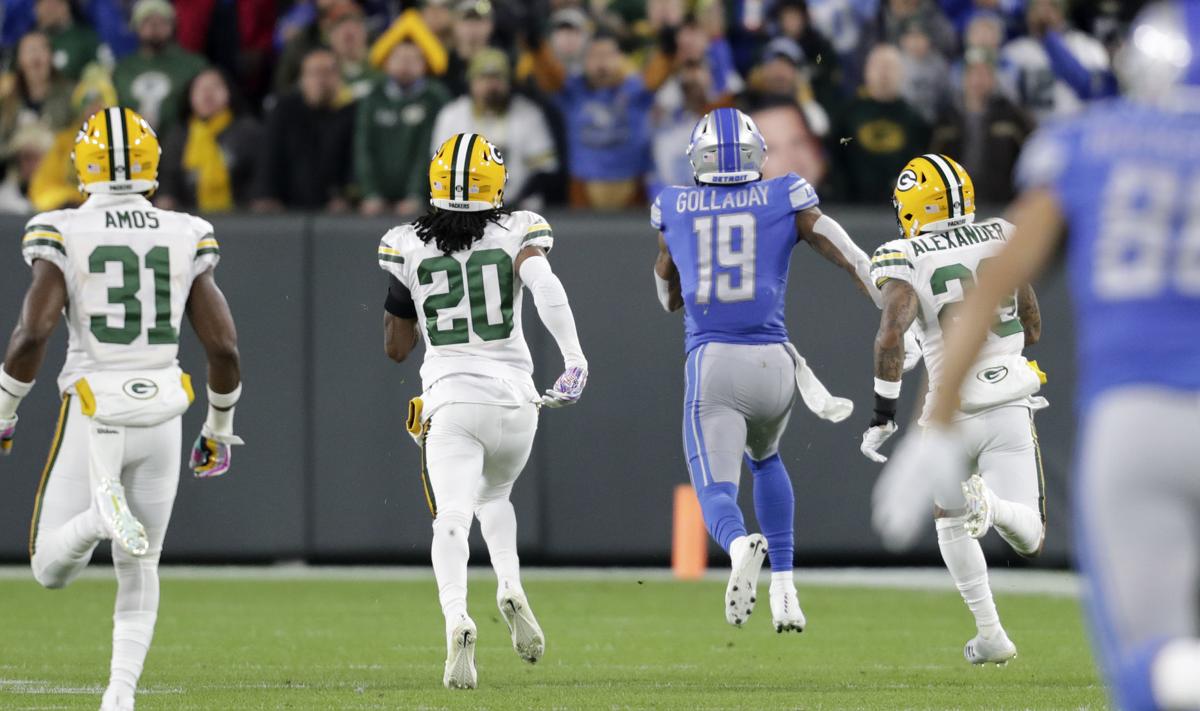 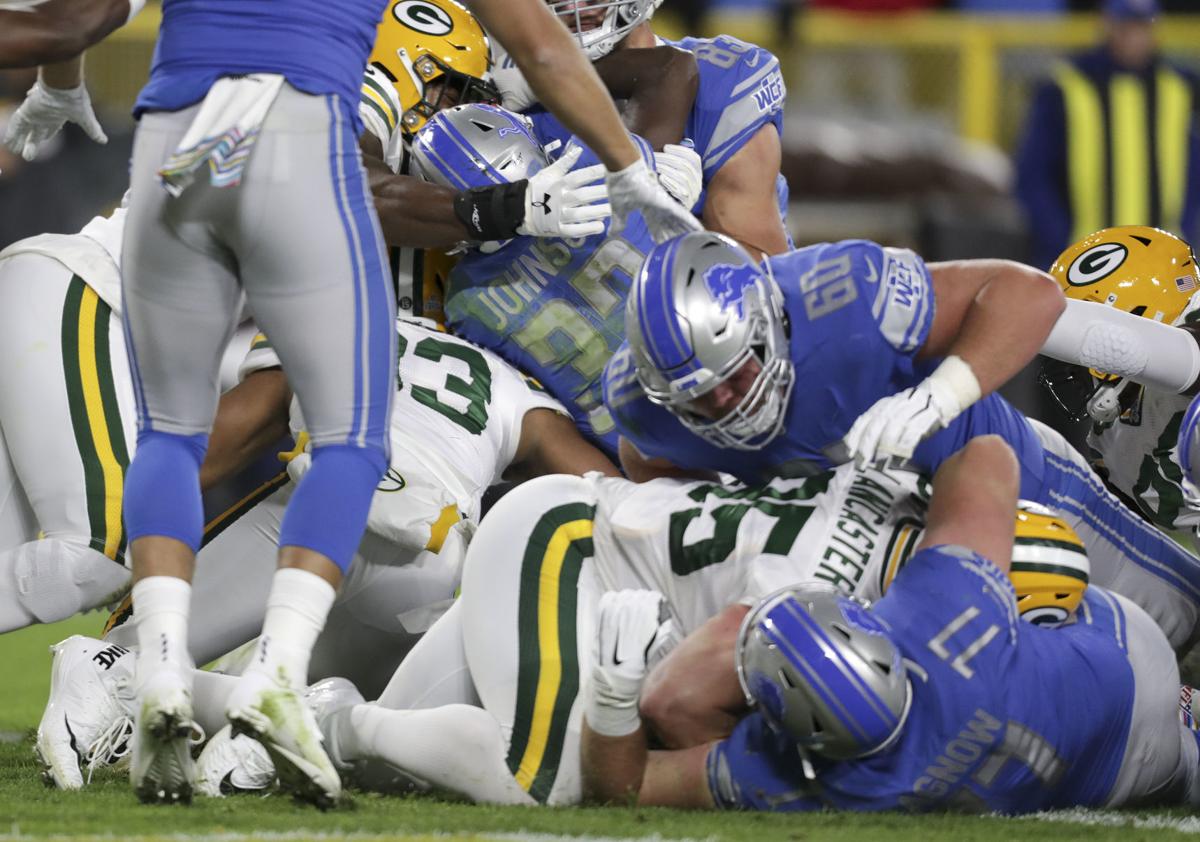 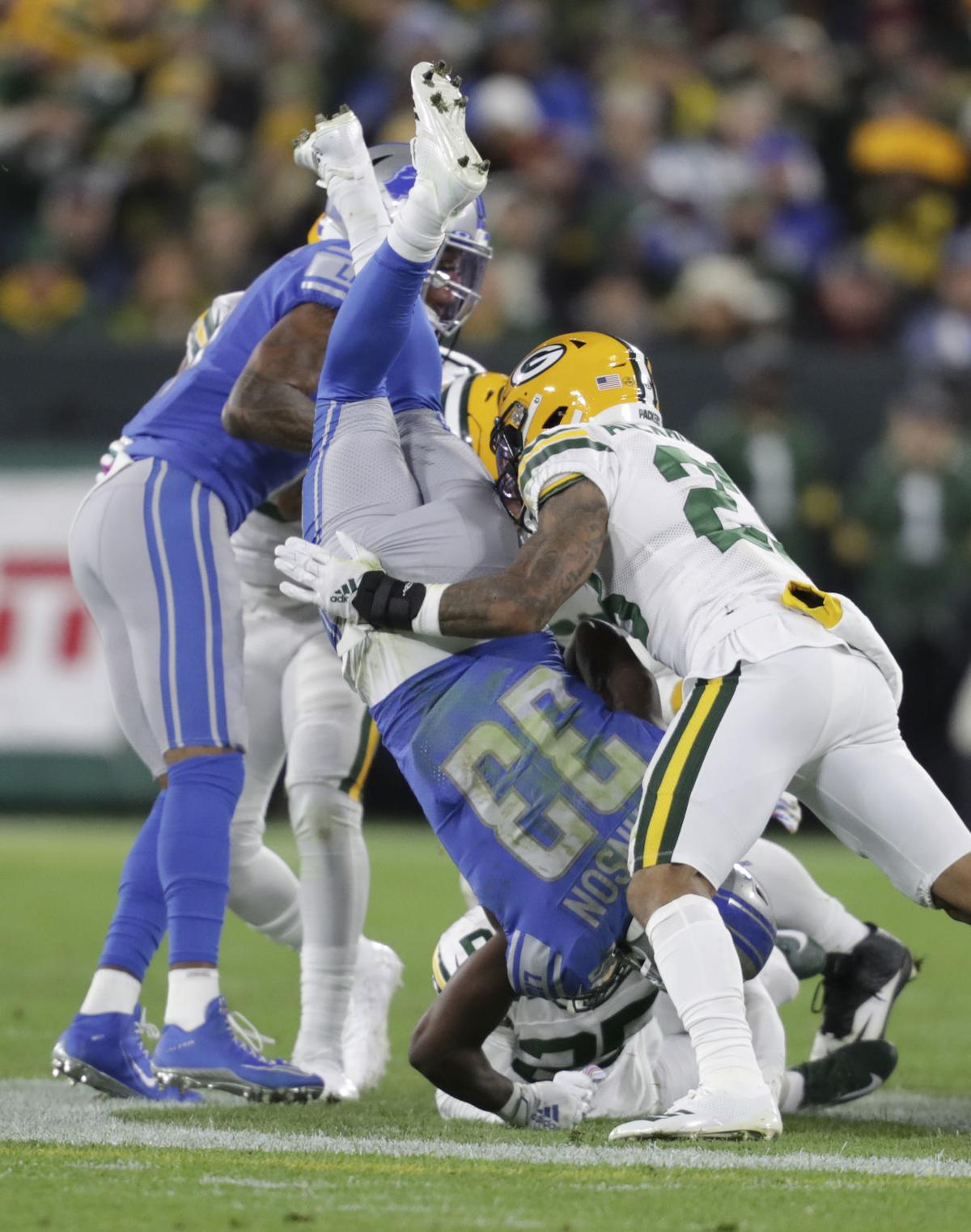 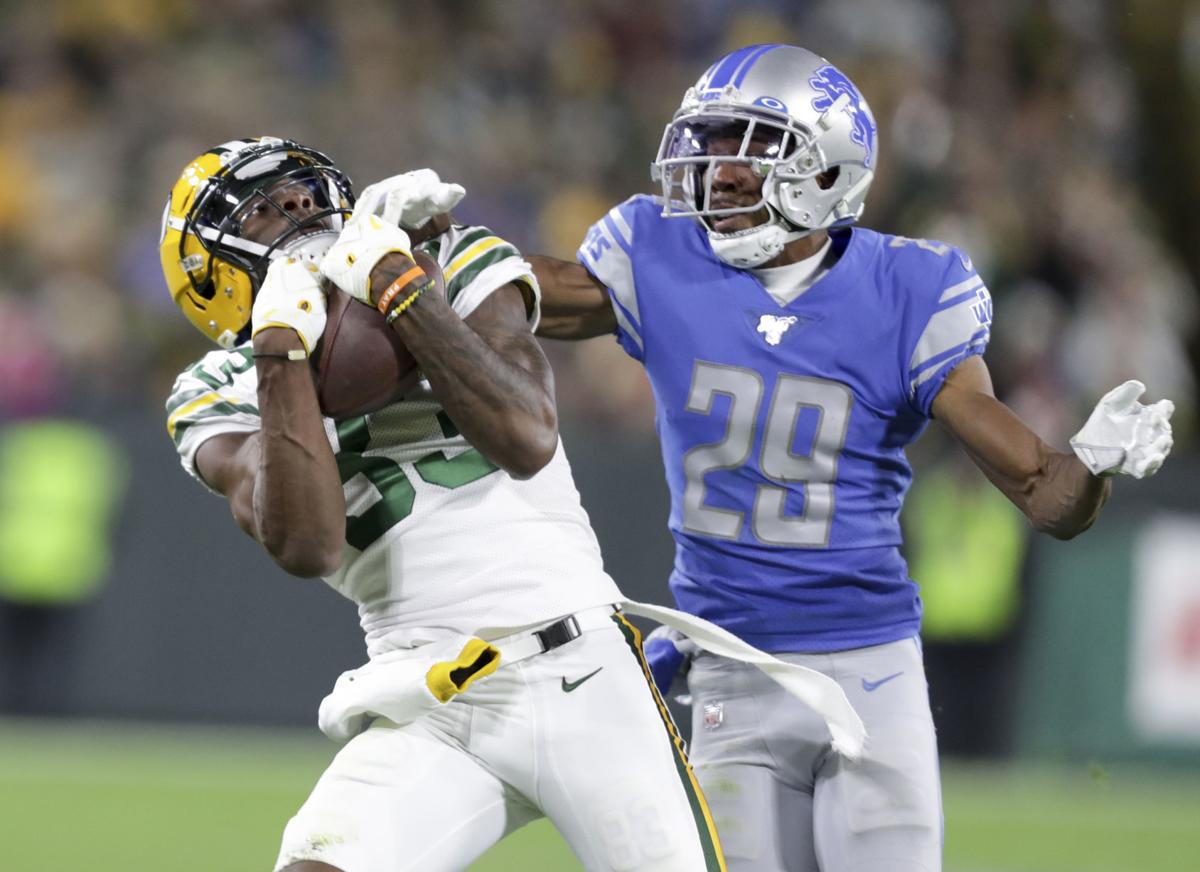 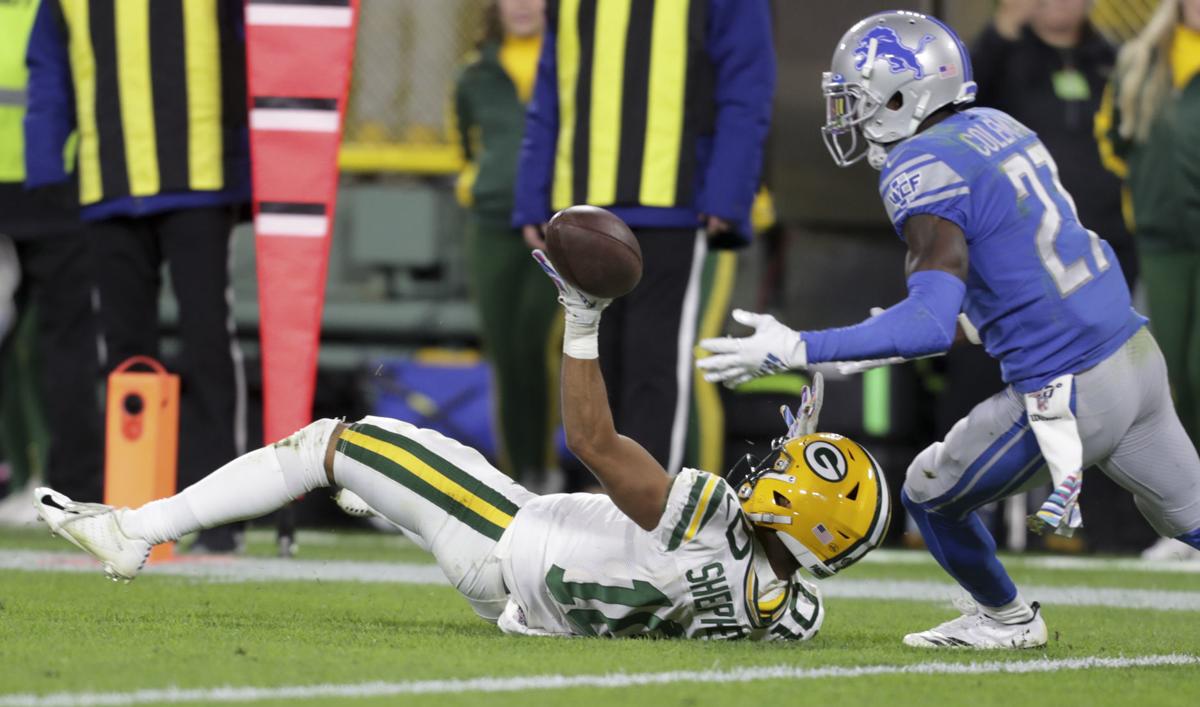 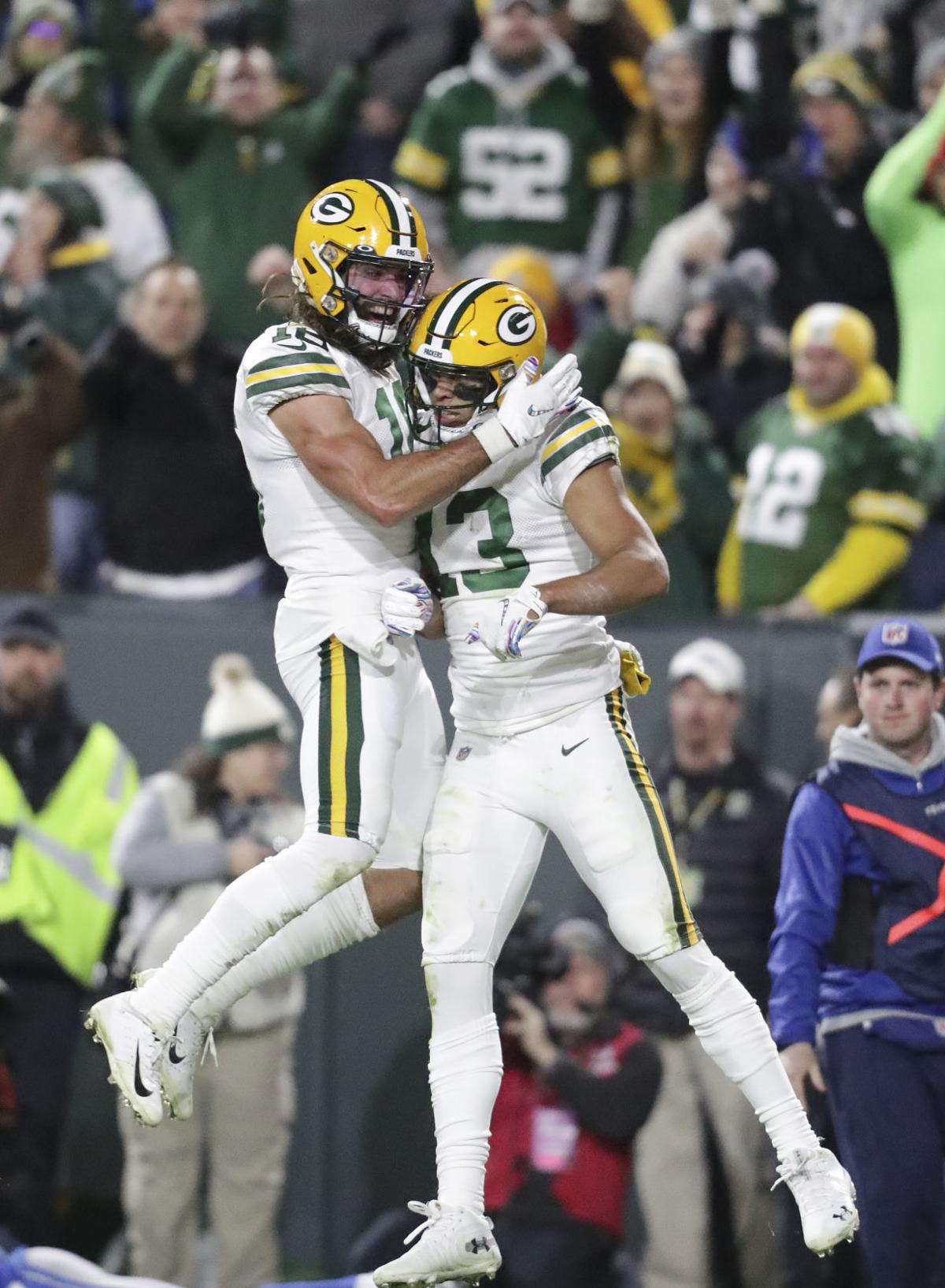 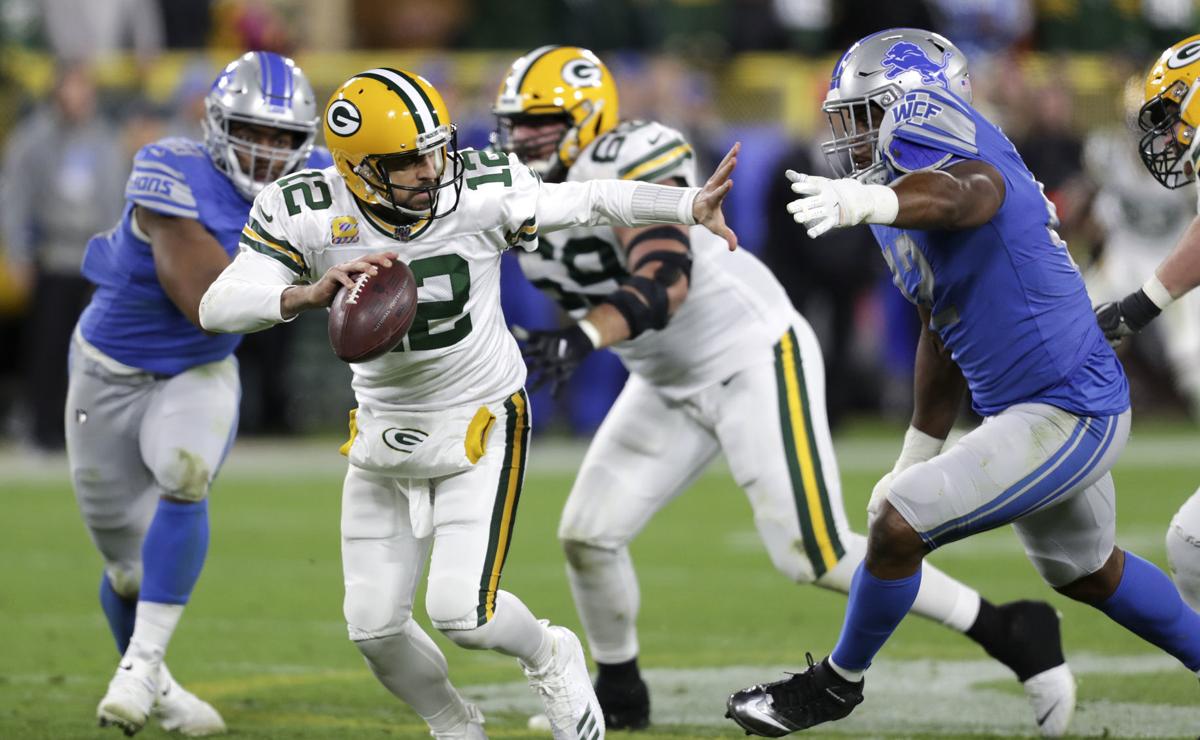 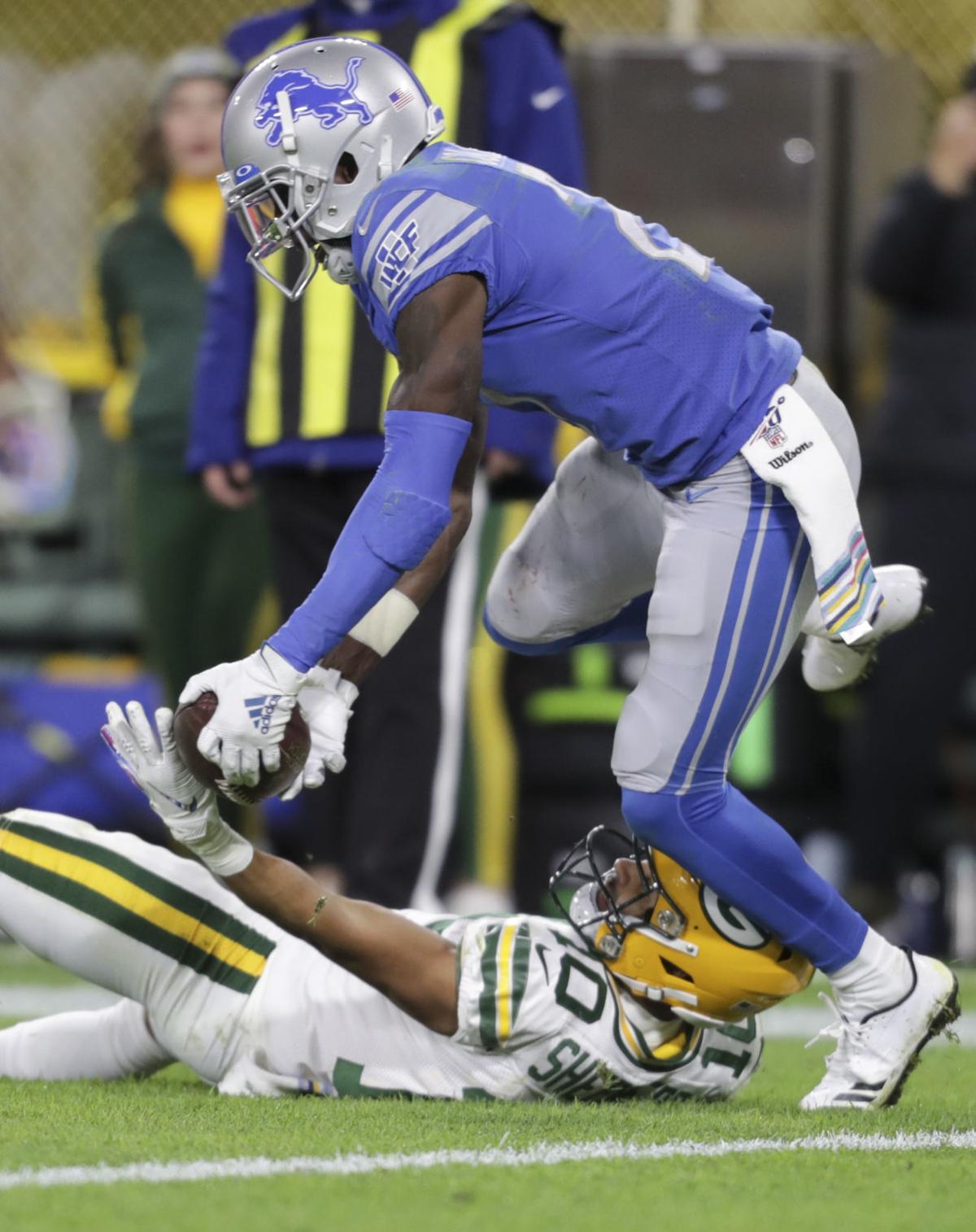 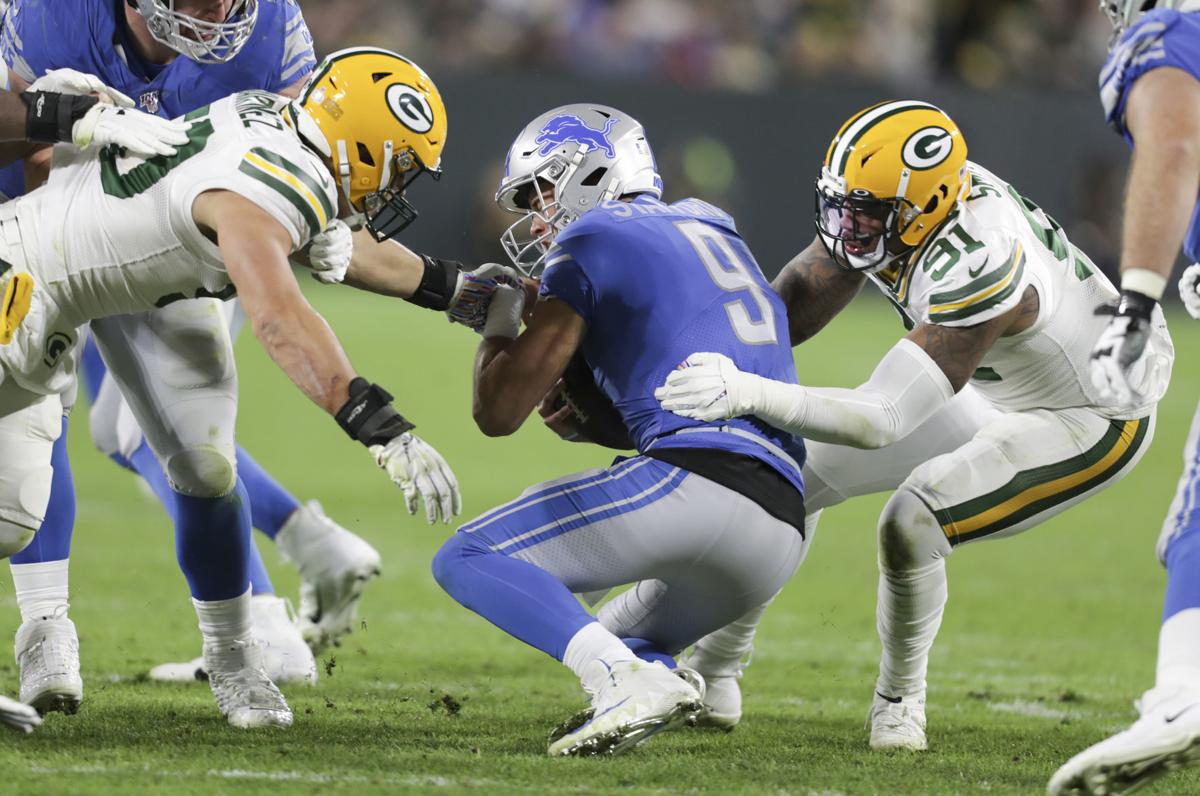 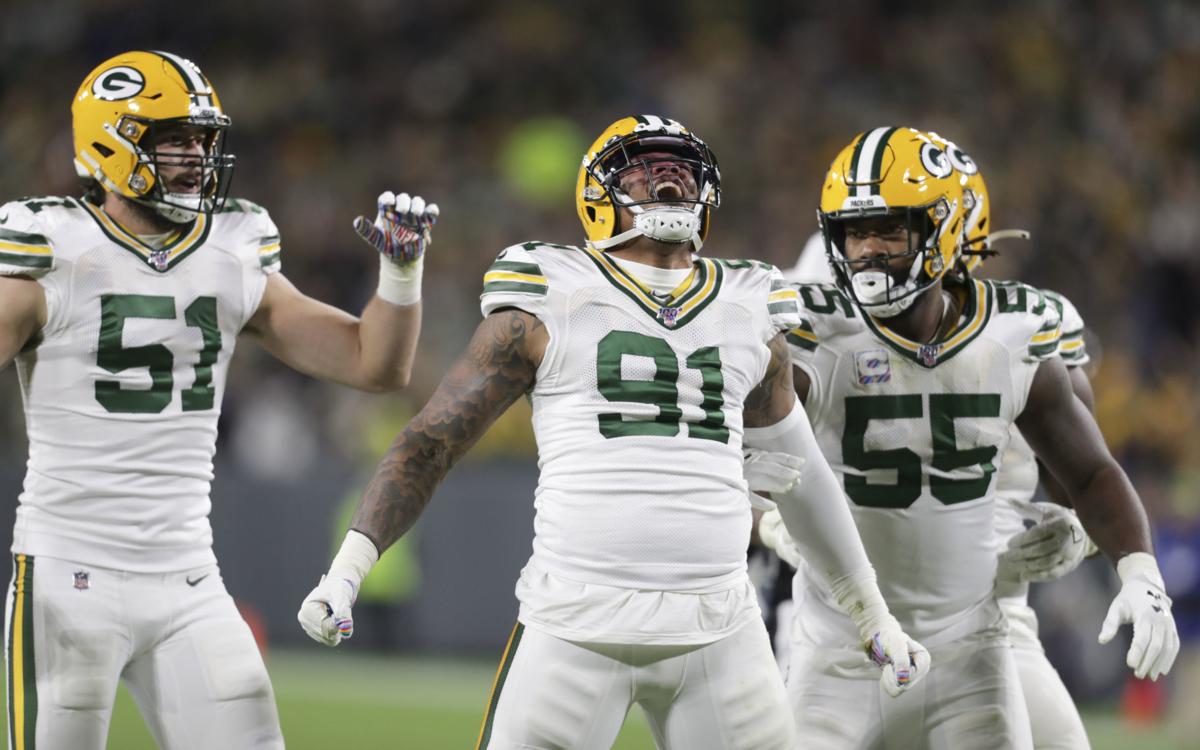 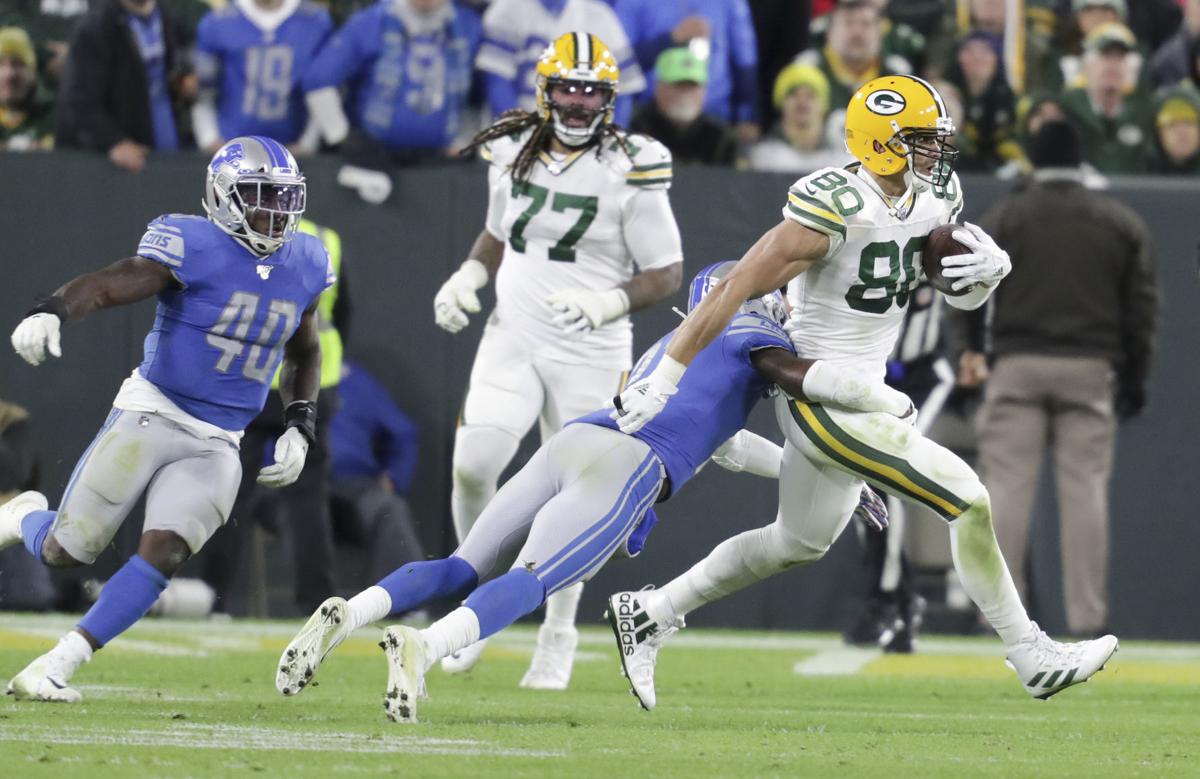 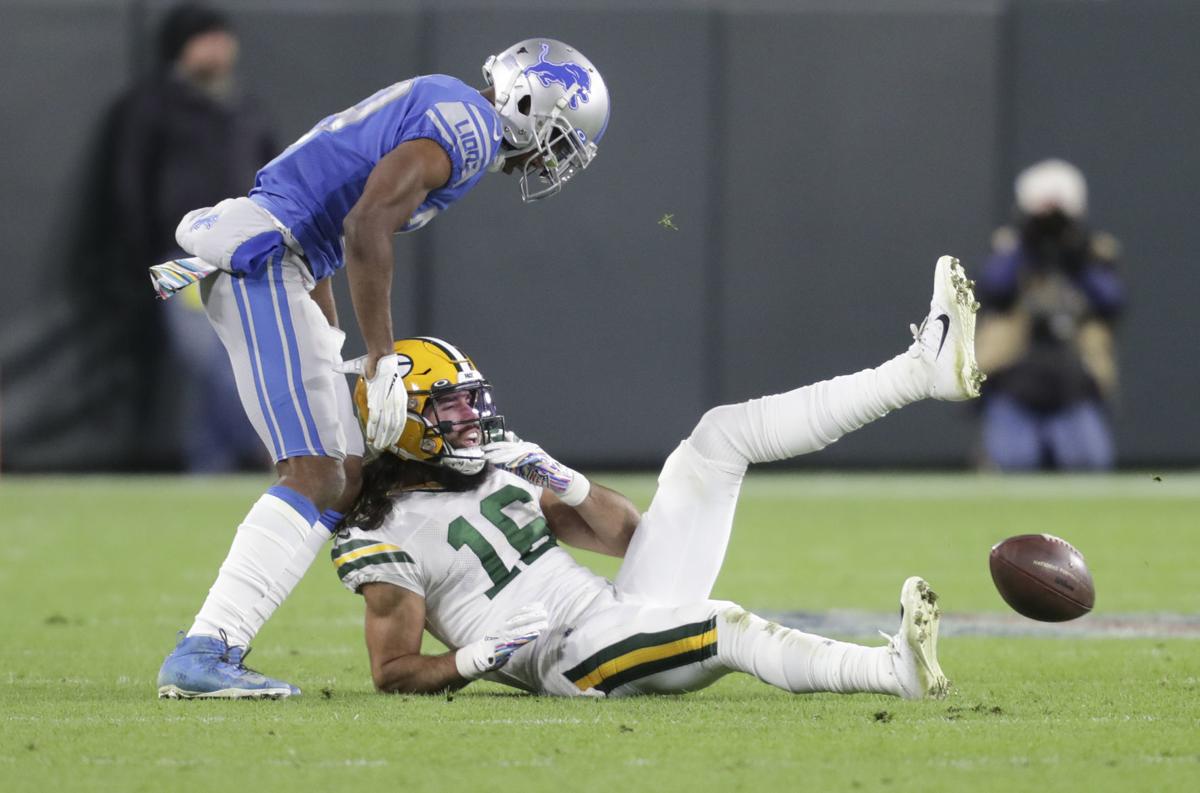 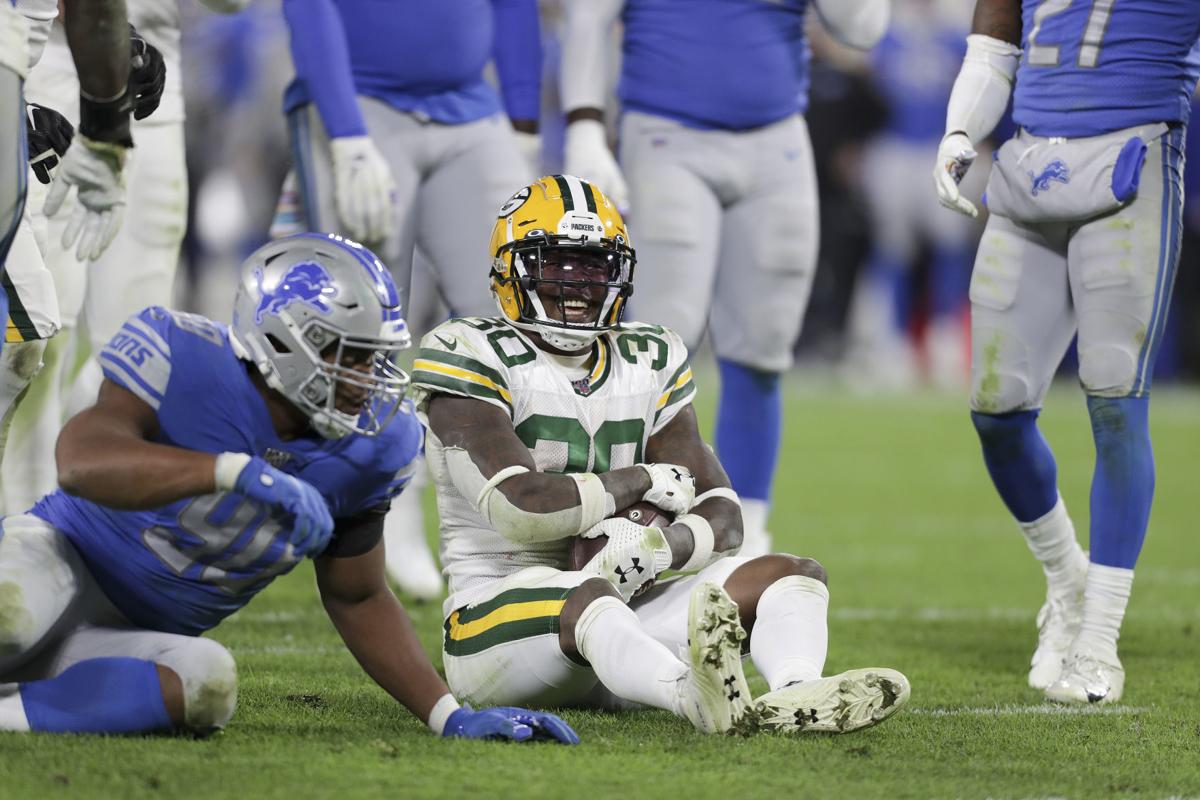 Green Bay Packers running back Jamaal Williams (30) took a seat at the 3-yard line instead of scoring to run down the clock late in the 4th quarter. The Green Bay Packers hosted the Detroit Lions Monday, Oct. 14, 2019 at Lambeau Field in Green Bay. STEVE APPS, STATE JOURNAL

Tight end Jimmy Graham followed five plays later with a drop in the end zone of his own, failing to hold onto what should have been a sliding 13-yard touchdown. Only running back Jamaal Williams’ 5-yard touchdown on a shovel pass from Rodgers prevented the drive from being a colossal disappointment. Williams’ touchdown pulled the Packers within 13-7.

Already playing without No. 1 wide receiver Davante Adams, who missed his second straight game with a turf toe injury sustained against Philadelphia on Sept. 26, the Packers lost their next two most experienced receivers — wide receiver Marquez Valdes-Scantling and Geronimo Allison — to what looked like significant injuries, although one was able to return.

Valdes-Scantling was injured late in the first half, when he was blocking on Aaron Jones’ 8-yard run and was rolled up on by Lions safety Tavon Wilson as Wilson tackled Jones. Valdes-Scantling was bent backward in half, but he miraculously was back on the field to start the third quarter.

Allison wasn’t as fortunate. Allison was injured on the Packers’ first drive of the third quarter when he tried to make a sliding catch on a pass from Rodgers downfield. Allison was able to catch the ball momentarily but then collided with defensive back Tracy Walker, who made helmet-to-helmet contact with Allison. The ball came free as Allison was motionless on the field and curled up in a fetal position. Although Walker was going for an interception on the play, he was flagged for a 15-yard unnecessary roughness penalty.

Cornerback Kevin King’s night did not get off to a great start.

On the very first play from scrimmage, the Lions went deep against him on a flea-flicker, as wide receiver Kenny Golladay blew past King and reeled in a 66-yard completion that set the Lions up at the Green Bay 11-yard line. The Packers were fortunate to hold the Lions to a field goal after that.

On the next series, Lions quarterback Matthew Stafford and offensive coordinator Darrell Bevell, the former University of Wisconsin quarterback and Packers assistant, went right back at King. This time, it was Marvin Hall who beat King, with Stafford again delivering a strike for a 53-yard gain. This time, the Lions were able to turn it into a touchdown, with running back Kerryon Johnson scoring on a 1-yard fourth-down touchdown run.

With tight end Robert Tonyan (hip) among the Packers’ inactives, the team brought Evan Baylis back up from the practice squad and released cornerback/returner Tremon Smith to make room on the 53-man roster. Baylis was on the 53-man roster two weeks ago against Philadelphia when Graham’s status was in question but was waived and returned to the practice squad last week. … Also inactive due to injury for the Packers were Adams, starting safety Darnell Savage (ankle) and cornerback Tony Brown (hamstring). … Running back Dexter Williams and offensive linemen Cole Madison and Adam Pankey were the Packers’ healthy scratches. … Ex-Packers defensive tackle Mike Daniels was inactive with a foot injury.

The Packers defeated the Lions 23-22 on Monday. Takeo Spikes joins the show to discuss the officiating in the game.

GREEN BAY — Wide receiver Davante Adams won’t be the only key player the Green Bay Packers will be without Monday night against the Detroit Lions.

The linebacker, signed as a free agent, has made a big impact on defense.

Lucas Patrick on Aaron Rodgers: ‘I don’t think many people truly know what he does off the field to help guys like me’

Lucas Patrick, who filled in at center in Sunday's win over the Cowboys, has nothing but praise for the Packers' quarterback.

Badgers in the NFL: Check out top performances by former Wisconsin players in Week 6

From Derek and T.J. Watt facing off in California to Russell Wilson continuing his MVP push on the road in Cleveland, here's a look at some no…