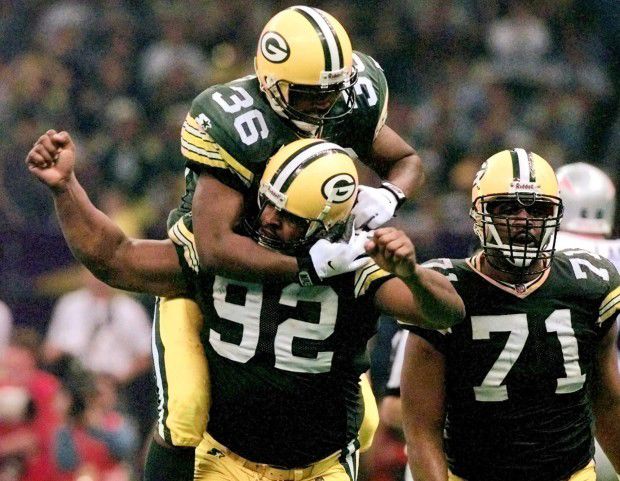 Green Bay Packers safety LeRoy Butler (36) jumps on the back of Reggie White (92) to celebrate a play during Super Bowl XXXI in 1997 at the Superdome in New Orleans. The Packers beat the New England Patriots. 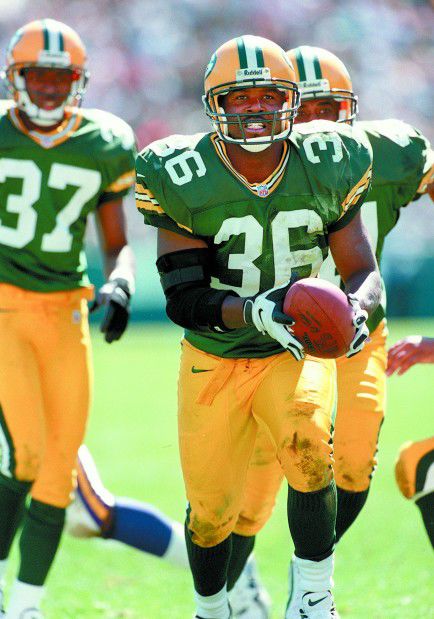 LeRoy Butler revolutionized the safety position during a 12-year career with the Packers.

LeRoy Butler, the do-it-all safety who starred for the Green Bay Packers as they returned to glory in the 1990s, finally has been named a finalist for the Pro Football Hall of Fame.

Here is Butler talking about being named a finalist 105.7 FM in Milwaukee.

First-timers Reggie Wayne and Troy Polamalu also are among the 15 finalists for the Pro Football Hall of Fame's modern-day 2020 class.

These 15 will be considered for selection on Feb. 1 in Miami. A player must receiver 80% of votes from the selection committee. A maximum of five modern-day players can be chosen.

For the first time this year, the Hall of Fame also is adding 10 senior candidates, three contributors and two coaches to be inducted in the Canton, Ohio, shrine in August. That is a special selection in celebration of the NFL's 100th season.

Lynch, now the general manager of the San Francisco 49ers, is a finalist for the seventh time. Faneca is a fifth-time finalist, while Boselli, Bruce and James are in their fourth year making the finals. Atwater and Hutchinson have done so three times, Seymour twice.

The class of 2020 will be introduced during NFL Honors, when The Associated Press announces its NFL individual awards winners, on the evening of Feb. 1 on Fox.

The entire 20-person class of 2020 will be on hand for the enshrinement week in Canton. Modern-era players along with contributors and coaches will be formally enshrined on Saturday, Aug. 8. The 10 seniors will have their own inductions the week of Sept. 16-19.

As the Green Bay Packers prepare to mark the 100th anniversary of the franchise's founding on Sunday, Jason Wilde ranks the five best defensiv…

The 25 modern-day finalists from an original group of 103 will be reduced to 15 on Jan. 3. The selection meeting will be Feb. 2, the day before the Super Bowl, in Atlanta.

First-year eligibles Ray Lewis and Randy Moss are among 27 semifinalists for induction into the Pro Football Hall of Fame.

A small crowd gathered outside Lambeau Field to catch the first glimpse of the Lambeau Leap statue on Friday.

Westerly wind gusts of 40 to 45 miles per hour are possible on Sunday, the National Weather Service said.

Billy Turner's positivity has been contagious for Packers

The 6-foot-5, 310-pound guard's conscious mission to spread positive energy has become a driving force behind the Packers' success this season.

Saints right tackle Ryan Ramczyk, a former University of Wisconsin athlete, was named to the team for the first time.

Green Bay's LeRoy Butler starred on one of the best teams in the 1990s and his tremendous versatility made him a pioneer in changing the role of the safety in the NFL.

Also voted in Saturday for the Pro Football Hall of Fame Class of 2020 were receiver Isaac Bruce, running back Edgerrin James and guard Steve Hutchinson.

Former Packer Charles Woodson is among 14 first-year eligible candidates for the Pro Football Hall of Fame, while former Packer and 2020 finalist LeRoy Butler returns to the ballot.

Former Green Bay Packers Charles Woodson and LeRoy Butler are among the 15 finalists for the Pro Football Hall of Fame's class of 2021.

Green Bay Packers safety LeRoy Butler (36) jumps on the back of Reggie White (92) to celebrate a play during Super Bowl XXXI in 1997 at the Superdome in New Orleans. The Packers beat the New England Patriots.

LeRoy Butler revolutionized the safety position during a 12-year career with the Packers.