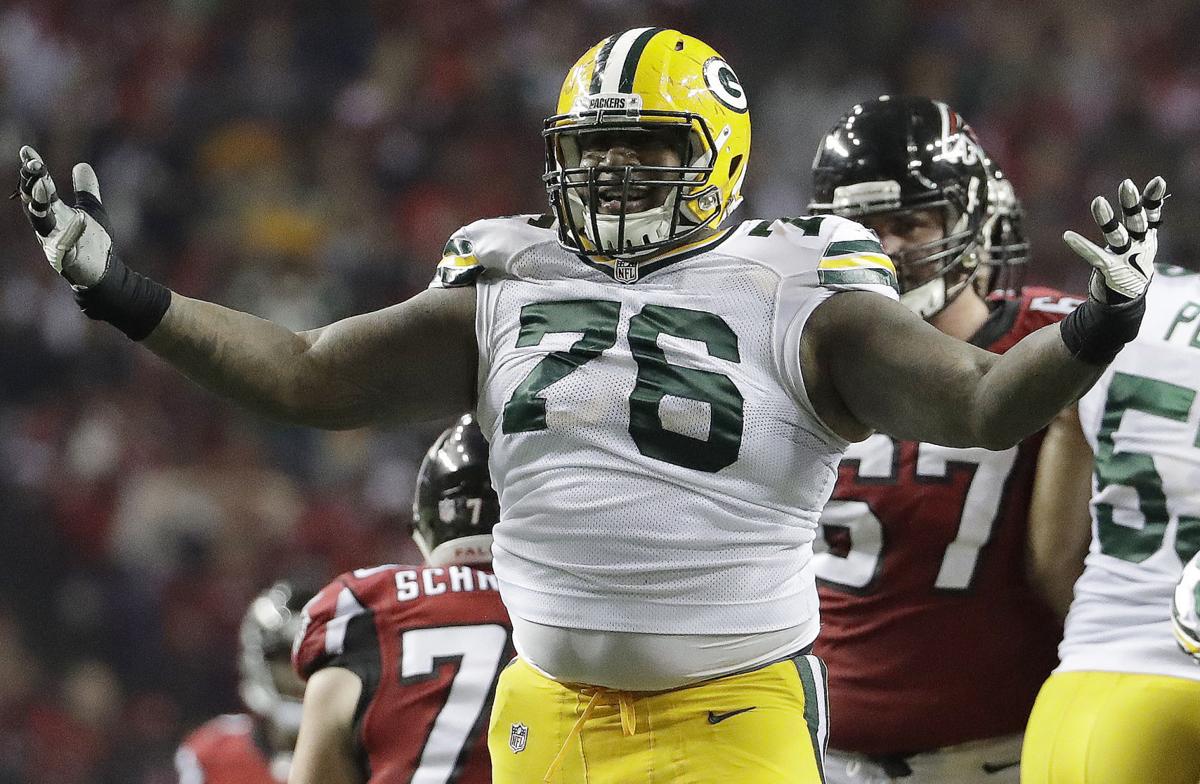 In the 10 games Mike Daniels played last season, he registered 26 tackles, two sacks and five tackles for a loss before being placed on injured reserve on Dec. 1. 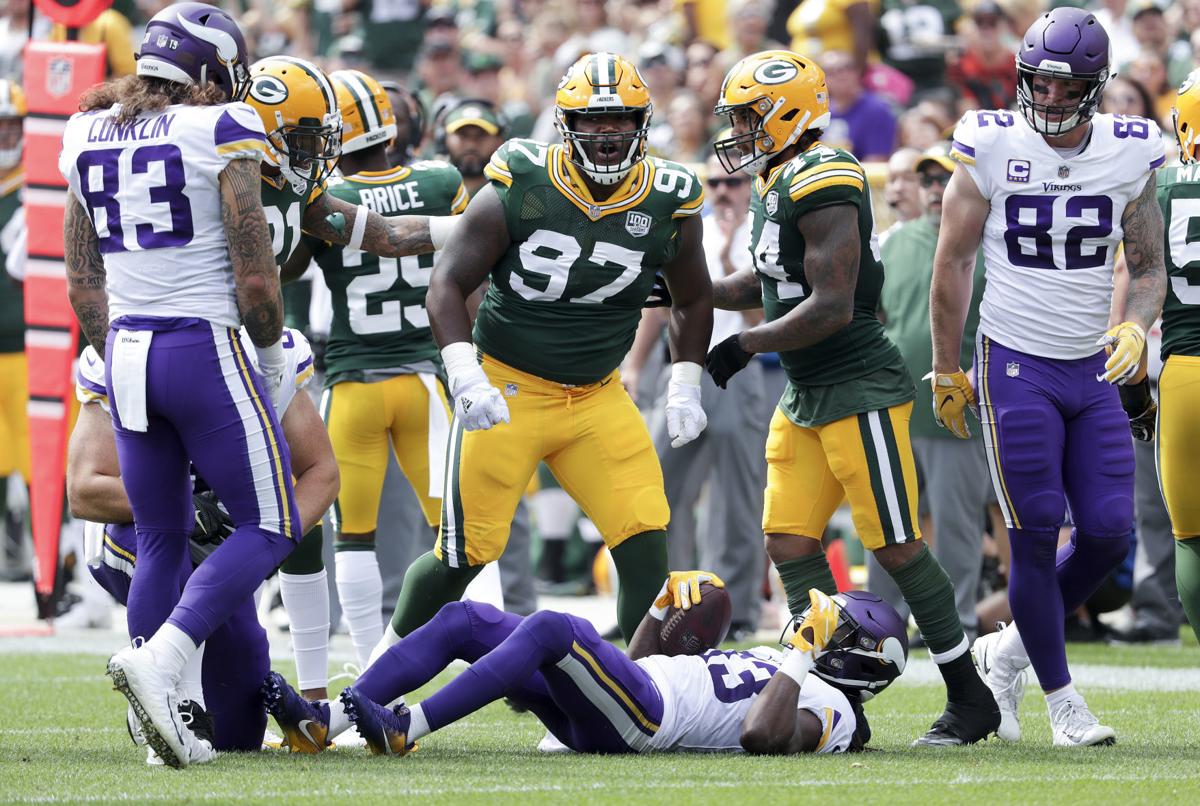 GREEN BAY — As the Green Bay Packers’ offseason program wound down, Mike Pettine was asked if — based on what his defense had shown against the Aaron Rodgers-led offense — he was happy with where his guys stood entering training camp.

After all, with Rodgers and his offensive mates learning coach Matt LaFleur’s new scheme while Pettine’s charges were in Year 2 of their system, the defense had gotten the better of the offense quite a bit during organized team activity practices and minicamps.

“For where we are, happy is probably a strong word,” the Packers defensive coordinator responded. “But I like the progression of where we are.

At the head of the class is the front of the defense, as the linemen — led by veteran Mike Daniels and budding star Kenny Clark — have the most experience and, it appears, the best grasp of their responsibilities in the scheme.

But on the defensive line, Daniels — in the final year of his contract and having turned 30 in May — remains the veteran leader of the group while Clark is on his way to being one of the most disruptive interior linemen in the league, if he’s not among them already.

The Packers are hoping they’ll each stay healthy for 16 games, especially after juggling the line amid injuries all along the front last year. On opening day, the Packers lined up with Daniels, Clark and veteran Muhammad Wilkerson. Wilkerson was lost for the season with a broken leg in Week 3 at Washington; Daniels suffered a foot injury Nov. 15 at Seattle that landed him on injured reserve the rest of the season and Clark was inactive for two straight games before going on IR for the season finale.

Those injuries gave the coaches and scouting staffs a longer look at some of the lesser-used linemen like former third-round pick Montravius Adams and undrafted rookie free agent Tyler Lancaster, who was a revelation while filling in for Clark.

“Obviously Kenny Clark has turned into a dominant player for us, and Mike Daniels was Steady Eddie like he always has been,” general manager Brian Gutekunst said. “But I thought the ability late in the year (to look at) Montravius Adams and Lancaster, and to see those guys do some really, really good things, gave us some pretty good hope going into this year that they can be significant factors for us.”

That said, defensive line coach Jerry Montgomery wouldn’t chalk the injuries up as a blessing in disguise. After all, the Packers’ luck was so rotten on the line that Lancaster got hurt to end the year, too.

“Some of the things that happened were freak, freak deals,” Montgomery said. “It’s a physical game that we play up front. It’s a man’s game. So those guys, to play that many snaps and get through the year as long as they did, it says a lot about them. Anything can happen on any snap.”

Here’s a closer look at the defensive line as the Packers prepare for training camp, which kicks off with its first practice on Thursday morning:

Is Daniels still in top form?

There are some who wonder what the future holds for Daniels, once an indispensable part of the defense but now coming off a significant foot injury that required surgery and now north of the 30-year-old line of demarcation, when some defensive linemen begin to slide. In the 10 games he played last season, he registered 26 tackles, two sacks, five tackles for a loss, eight QB hits (second-most on the team) and 14 quarterback pressures (tied for third on the team) before being placed on injured reserve on Dec. 1.

Daniels didn’t take part in any practices during the offseason while recovering from the foot injury but Montgomery insisted he remains a big part of the team’s plans.

“He’s here and he’s a big a part of it as anybody else. He’s still a dominant player,” Montgomery said. “I mean, yeah, he was a little beat up, but at the end of the day he’s a guy that is very dominant at the line of scrimmage. He’s a big part of it. And when we get him back, he’ll be right in the mix like he’s always been.

“The good thing is when the room gets deeper, now you don’t have to play him 60 snaps a game or 50 snaps a game. Now he’s even more dominant because he’s fresher.”

After finishing strong each of his first two NFL seasons — and building upon those strong finishes — the 2016 first-round pick did not end 2018 the way he wanted. An elbow injury, which he might have gone against doctor’s orders and forced his way onto the field with, wasn’t worth the risk once the Packers were out of playoff contention, so the team shut him down completely. That was tough to take for the quiet-but-competitive Clark.

After posting strong numbers in 2017 (4.5 sacks, 78 tackles, eight tackles for a loss, two forced fumbles, 11 quarterback hits and a pass breakup), Clark was ahead of that pace in most categories before missing the final three games, having registered six sacks, 73 tackles, one forced fumble, seven QB hits and two pass breakups.

“I tell him every single week that he makes my job that much easier because he’s taking double teams, triple teams, still making plays,” inside linebacker Blake Martinez said. “And he’s a guy that has extremely high character, extremely high work ethic and every single day he’s doing things to get 1-to-2% better. It’s kind of scary to know that he still is getting better.”

One of the best stories of the season on defense was how Lancaster, an undrafted free agent who started the season on the practice squad but was called up to the 53-man roster in October and did an awfully good Clark imitation late in the year when Clark’s elbow injury sidelined him. He played particularly well in a pair of December games (against the Atlanta Falcons, at the New York Jets) before suffering an elbow injury of his own in the season finale.

“It didn’t surprise me because I saw it every day in practice. He got better each day,” Montgomery said. “But when he got here, I would have never said, ‘Oh man, this kid is one of the most productive d-linemen we have’ — in the amount of snaps that he had. But he was just happy to be in the building and he was going to do whatever we asked him to do the best of his ability.

“If I said, ‘Hey, Tyler, you need to lose 20 pounds,’ he would do it tomorrow, right? If I said, ‘You need to put on 30 pounds,’ he would do it tomorrow. He’s that kid. If I tell him how to do something a certain way, it’s going to kill him until he does it right. That’s just his mindset. So I wasn’t shocked when he got his opportunity. I wasn’t nervous putting him in the game. It was one of those deals where I’m like, ‘All right, bud, go do what we do.’ And he did.”

A third-round pick is a fairly significant investment in a player, and thus far, Adams hasn’t paid many dividends. He enters Year 3 having managed only 26 tackles and 1.5 sacks. He did have three quarterback pressures and flashed a few times during the 212 snaps he played while seeing action in all 16 games, but to allow Pettine to rotate Daniels, Clark and others into and out of the lineup, Adams will have to deliver quality snaps.

“I don’t know if you guys watched, but he was a lot different player last year than he was the year before. So he’s taken the right steps,” Montgomery said. “The guy came back in tremendous shape (this spring). He looks a lot different body-wise than he did a year ago. Like, he understands now this is how he provides for his family and, ‘I need to do all that I can to be the best player I can be.’ He’s done that. He’s working every day. Is he there? No. But he’s definitely a lot further along today than he was last year at this time.”

Packers by position: Experience everywhere on Packers’ offensive line — except with the guy coaching it

Adam Stenavich, 36, takes over as coach of a starting unit that has a combined 408 games and 325 starts (including playoffs) of experience.

Packers by position: In Matt LaFleur's offense, can Jimmy Graham be the player the Packers envision him to be?

Last year, in his first season in Green Bay, Graham caught 55 passes for 636 yards but managed only two touchdown catches.

As the "quarterback'' of the Packers' defense, the expectation is for Martinez to continue keeping the unit organized while also making more plays himself.

Davis finished in the top 10 in the NFL in both punt return average and kickoff return average in 2017 but missed most of last year with a hamstring injury.

With the $7.6 million base salary and $10.7 million salary-cap charge Daniels was set to carry in 2019, the Packers decided moving on from him made both sense and cents.

Defensive coordinator Mike Pettine calls the third-year defensive lineman the "most improved" player from a year ago.

In the 10 games Mike Daniels played last season, he registered 26 tackles, two sacks and five tackles for a loss before being placed on injured reserve on Dec. 1.