“How many he wrote? I mean, hundreds,” Favre recalled this summer, several weeks after attending — and, along with Rodgers, speaking at — a private memorial service for their quarterbacking role model after Starr passed away at age 85. “Not only after good games, not even necessarily after a game. A tough game, a tough loss, maybe I didn’t play too well. ...

“One of the letters I got from Bart was after we had won the Super Bowl in New Orleans (after the 1996 season). This letter starts off like basically all of them did from Bart: ‘Hey Brett, congratulations. What a great season, what a great win. I could not be happier for you and your team. ...’ So on and so forth.

“But, you know, Bart was a perfectionist in so many ways, and a true gentleman and professional. This is typical Bart. Then he (writes), ‘I am a bit concerned about how you wore your hat during media day.’ I think it was turned backwards or something like that. You couldn’t help but get a chuckle out of it. But that was Bart, he was always quick to congratulate and commend and say all kinds of nice things, but he would also point out things that he felt in his eyes were unprofessional and he just wanted you to be aware of it.”

For the past three decades, Favre and Rodgers have done their best to live up to Starr’s ideals. And while that’s not always the easiest thing to do — as a human being, or as a quarterback — their success has given the Packers something no other NFL team can claim in the past century: three Pro Football Hall of Fame-level quarterbacks.

“I met him back in 2006 at Fan Fest, and I remember the feeling of excitement meeting him. I used to watch him on an old VHS (tape) — highlights of him from the first couple Super Bowls and knowing the stories.

“He lived a fantastic life. He impacted so many people. He did so much for people that you probably will never know about. I think he taught a lot of us great lessons about what it means to be a Packer.”

Starr, of course, led Vince Lombardi’s legendary Packers teams to five titles in a seven-year span, including victories in the first two Super Bowls — earning Super Bowl MVP honors in each game. His teams were 9-1 in postseason play, and his playoff passer rating of 104.1 remains the best in NFL history. A 17th-round pick from Alabama in the 1956 NFL Draft, he became the starter in 1959 and played 196 regular-season games (153 starts) in 16 seasons in Green Bay.

His playing career, which individually included the 1966 NFL MVP award and four Pro Bowl selections, ended when he retired in February 1972, and he was inducted into the Pro Football Hall of Fame in 1977.

While the Packers weren’t completely devoid of quality quarterbacking during the two decades between Starr’s retirement and Favre’s arrival in a February 1992 trade with the Atlanta Falcons — if not for a host of injuries and a pitiful defense for much of his career, Lynn Dickey might be rightfully mentioned in the same breath as Favre and Rodgers as Starr’s successors — it was Favre’s arrival that led to the 1996 team’s Super Bowl XXXI title, the organization’s first since Starr led the 1967 team to the Super Bowl II championship.

Favre also played 16 seasons in Green Bay before finishing his career with one season with the New York Jets and two with the NFC North rival Minnesota Vikings. A three-time NFL MVP and 11-time Pro Bowl pick, Favre started 253 straight games in Green Bay, led the Packers to the playoffs 11 times and was enshrined in the Pro Football Hall of Fame in 2016, after he and the franchise reconciled several years after the trade that sent him to New York.

That trade, of course, paved the way for Rodgers, the team’s 2005 first-round draft pick who served a three-year apprenticeship behind Favre until becoming the starter in 2008. In his third season as the starter, Rodgers led the 2010 team to the Super Bowl XLV title, winning the game’s MVP award. He enters his 12th season as the starter with two NFL MVP awards (2011, 2014), seven Pro Bowl selections and the highest career passer rating in NFL history (103.1). The 35-year-old is a shoo-in to be a first-ballot Hall of Famer five years after he someday retires, although he intends to play into his 40s.

According to Packers official team historian Cliff Christl, no NFL franchise has had such an extended run of quarterbacking greatness — or can boast three Pro Football Hall of Famers, with Rodgers ticketed for Canton eventually.

The San Francisco 49ers had Joe Montana and Steve Young for 18 years (1981-98). The Los Angeles/St. Louis Rams had back-to-back Pro Football Hall of Famers with Bob Waterfield and Norm Van Brocklin for 13 seasons (1945-57) and later had Kurt Warner, who led the franchise to the Super Bowl XXXIV title, won two NFL MVPs and was inducted into the Hall in 2017.

Over their histories, the 49ers had Montana, Young and John Brodie, as well as Y.A. Tittle, although Tittle was better known for his stint with the New York Giants; the Dallas Cowboys had Don Meredith, Roger Staubach, Danny White, Troy Aikman and Tony Romo; the Washington Redskins had Sonny Jurgensen, Joe Theismann and Sammy Baugh; the Baltimore/Indianapolis Colts had Johnny Unitas, Bert Jones, Peyton Manning and now Andrew Luck.

But it’s hard to argue that any franchise had a better history at the position than the Packers, who before Starr also had Arnie Herber, a pass-throwing halfback from 1930 to 1940 who entered the Hall in 1966, and Cecil Isbell, who ended his playing career abruptly after five seasons but was still a member of the NFL’s 1930s all-decade team alongside Herber.

“When you live in Green Bay, you know about the Lombardi years and Bart Starr and all the guys that made those teams special, and you’d like to be a part of something special yourself,” Rodgers said. “We have to raise our level of play, obviously. We need to win some more championships.”

A month from the season opener, is it time to worry about the Packers’ offense?

As the Packers wrapped up their two-day joint practice with the Houston Texans Tuesday in Green Bay, their new-fangled, cutting-edge offense has yet to look all that impressive in practice.

Even as he became an NFL superstar playing for Houston, J.J. Watt has never forgotten where he came from, making him one of the state’s favorite sons and greatest ambassadors.

Insisting he’s not ‘old and slow,’ Jimmy Graham vows to be the player Packers expected him to be

The 33-year-old veteran believes he’s a good fit for the Packers’ new offense under Matt LaFleur, who uses multiple tight end sets and appears to have big plans for Graham.

Lonnie Johnson drilled Jace Sternberger so hard that Sternberger’s helmet flew off — and Johnson then stood over him in a flexing, taunting manner, touching off a brawl.

During Family Night at Lambeau Field on Friday night, Tony Brown gave everyone something to really talk about with an interception of DeShone Kizer he returned for a touchdown.

“Obviously I’m thrilled and excited to be back in Green Bay and to be playing in Wisconsin," Watt said. "The last time we played here, I was injured, so I couldn’t play at Lambeau."

The 34-year-old Nelson played in Green Bay from 2008-2017, winning a Super Bowl with the Packers, before spending last season with the Oakland Raiders.

Having admitted late last year that he needed to be more of a professional, the Packers third-year cornerback took a new approach with his time off this offseason.

Guillain-Barré syndrome, an autoimmune disease that attacks the nervous system, sapped most of Travis Frederick’s strength and left him struggling to walk last year.

Marquez Valdes-Scantling has emerged early in camp as the clear-cut third wide receiver in the pecking order behind No. 1 target Davante Adams and Geronimo Allison.

Robert? Bobby? By any name, Tonyan trending toward more opportunities in Packers’ offense

The Packers are excited about the potential of the second-year tight end.

Jason Wilde offers three keys for the Green Bay Packers when they host the Houston Texans in their preseason opener Thursday night at Lambeau Field. 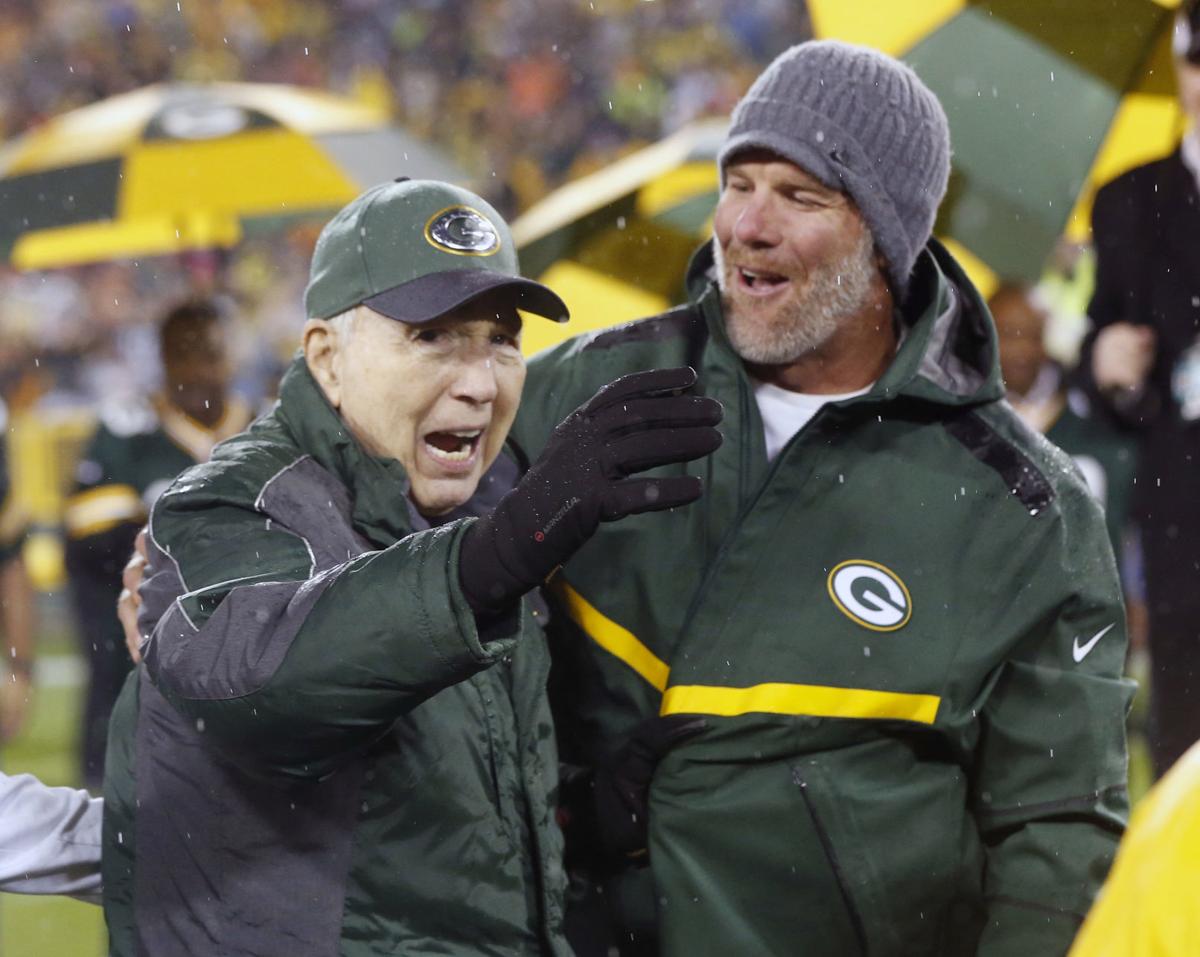 Brett Favre smiles at Bart Starr, left, during a ceremony in 2015 when Favre's Packers jersey was retired. 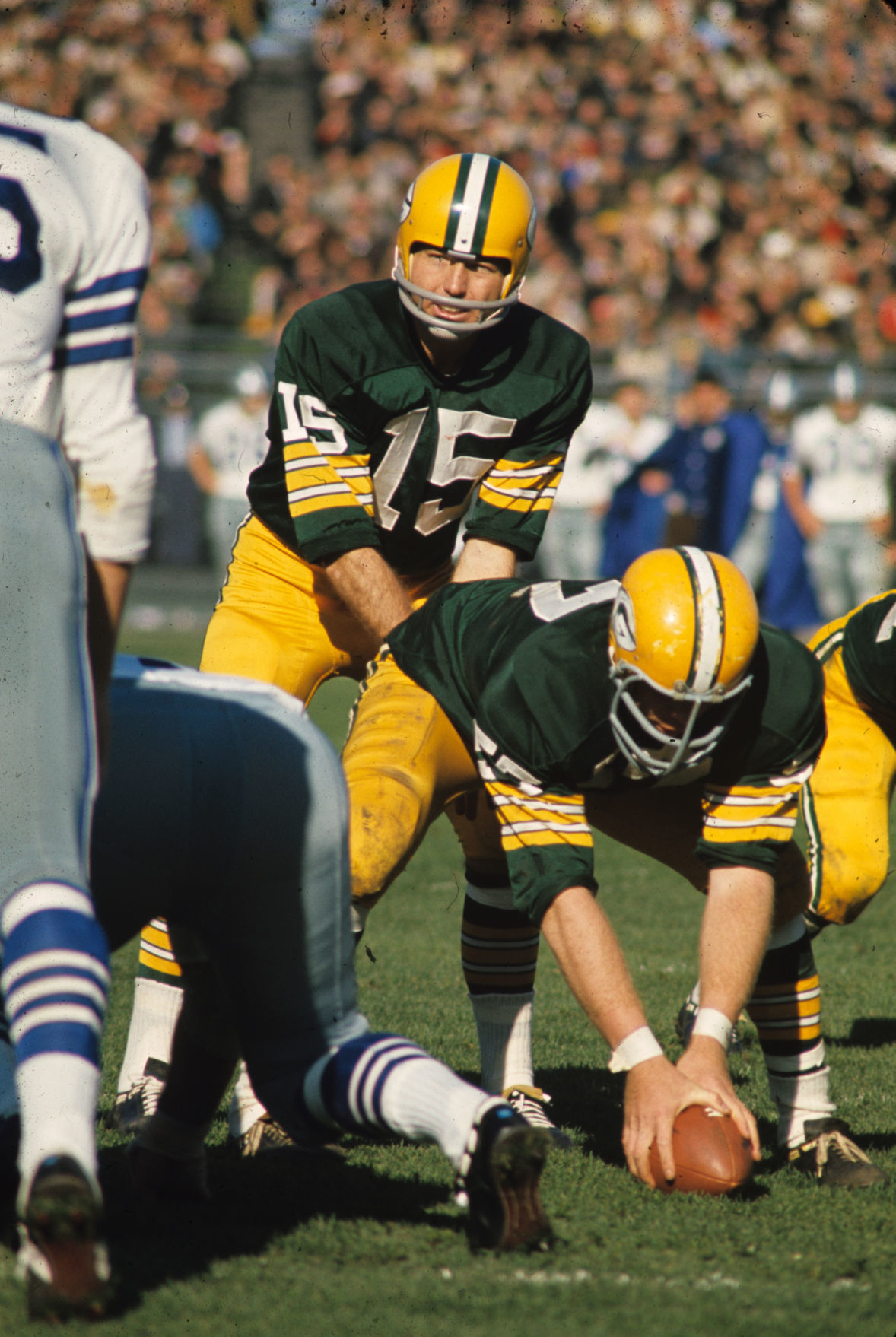 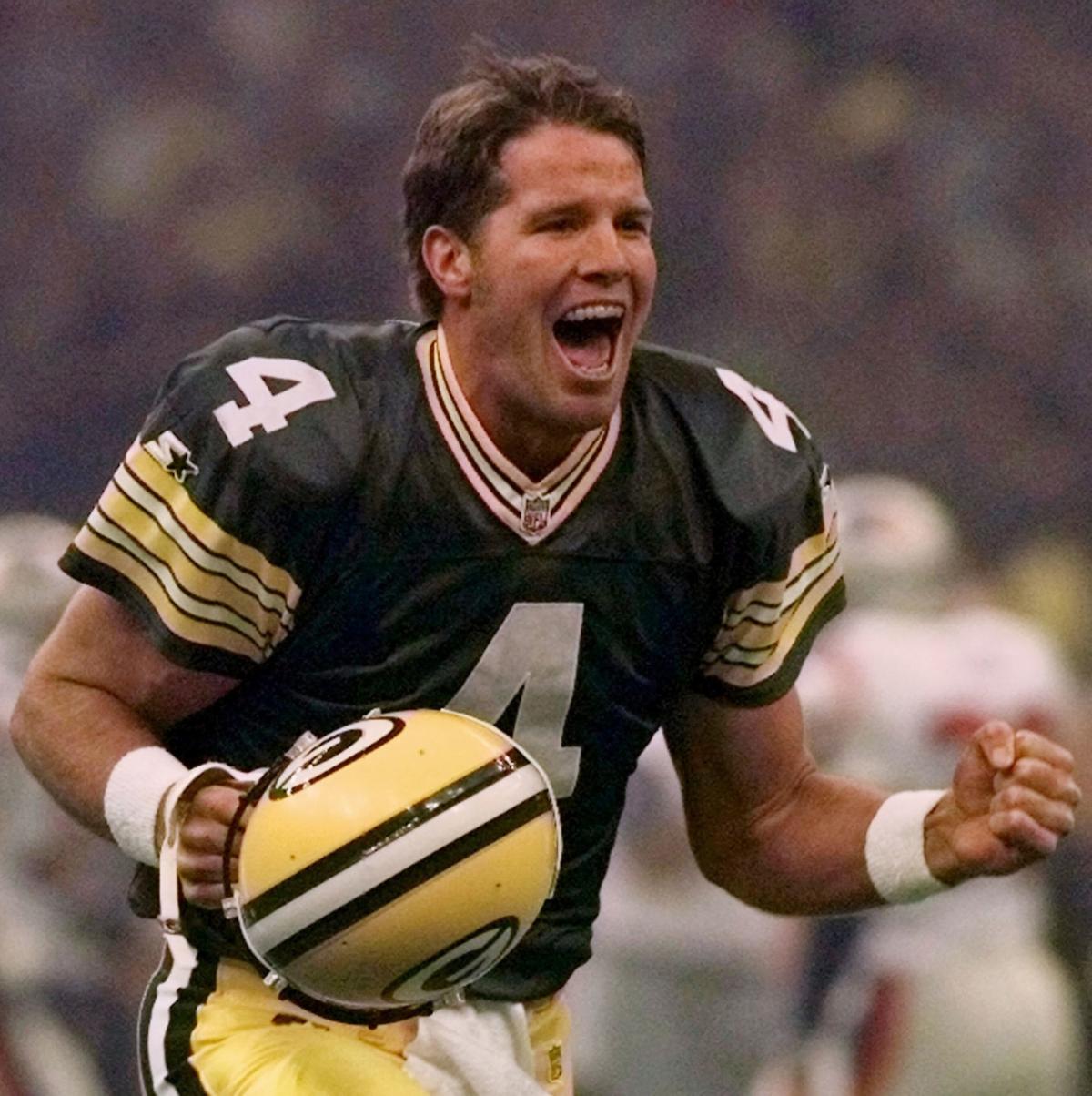 Brett Favre celebrates after throwing a touchdown pass to Andre Rison during Super Bowl XXXI in New Orleans on Jan. 26, 1997. 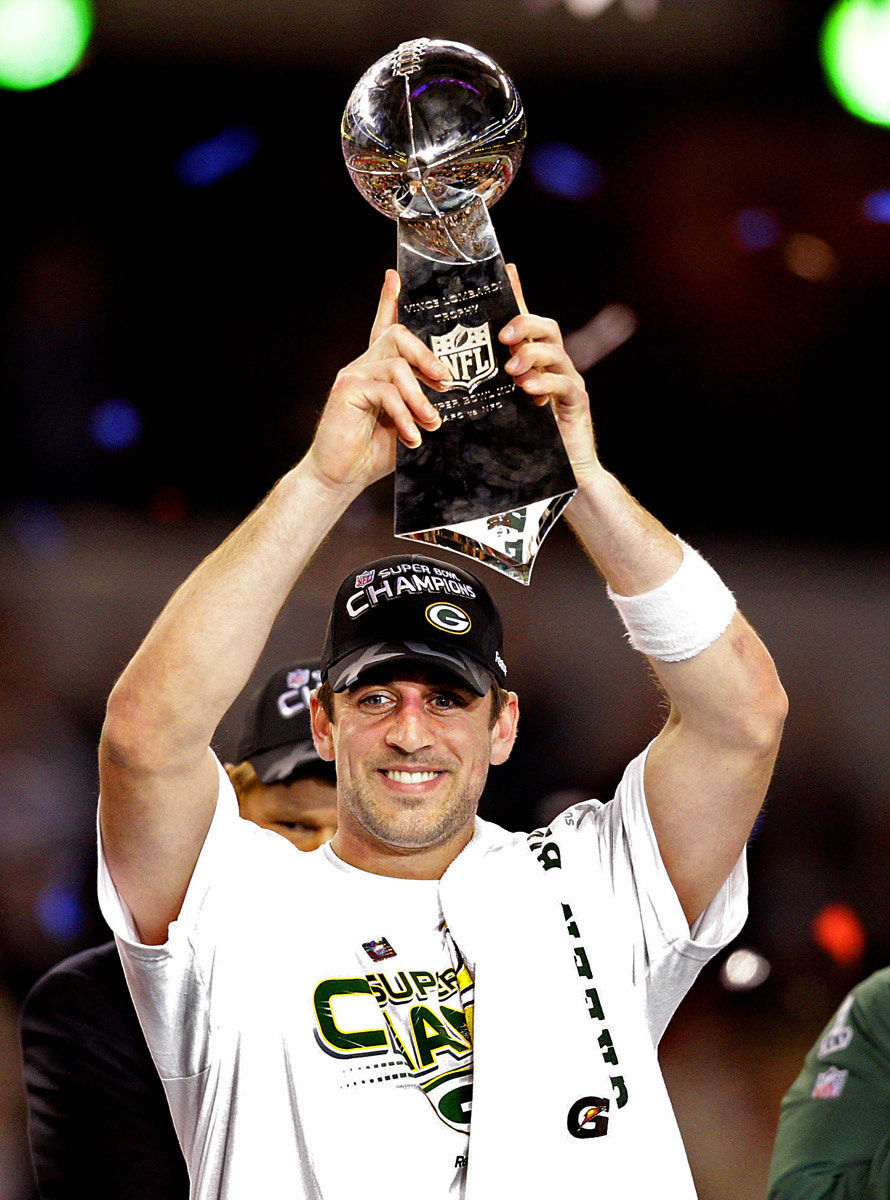