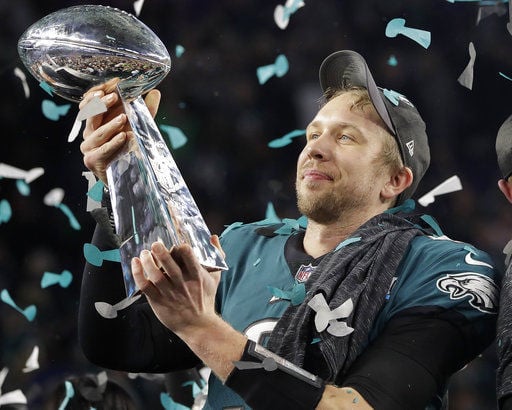 Philadelphia's Nick Foles holds up the Vince Lombardi Trophy after the Eagles beat the New England Patriots 41-33 in Super Bowl 52 on Sunday, Feb. 4, 2018, in Minneapolis. 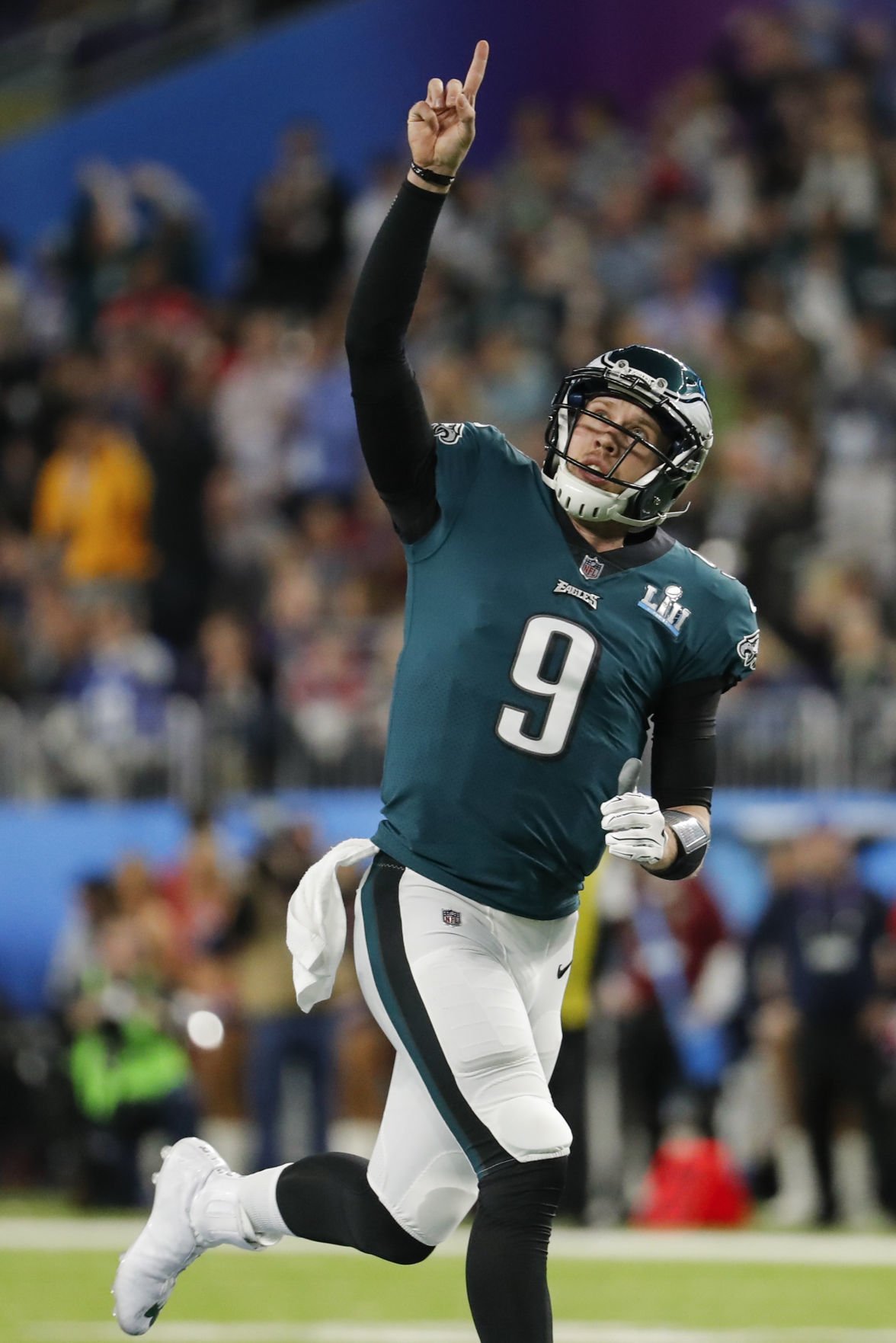 Eagles quarterback Nick Foles, the game's MVP, completed 28 of 43 passes for 373 yards with three touchdowns and one interception. He also caught a 1-yard TD pass. 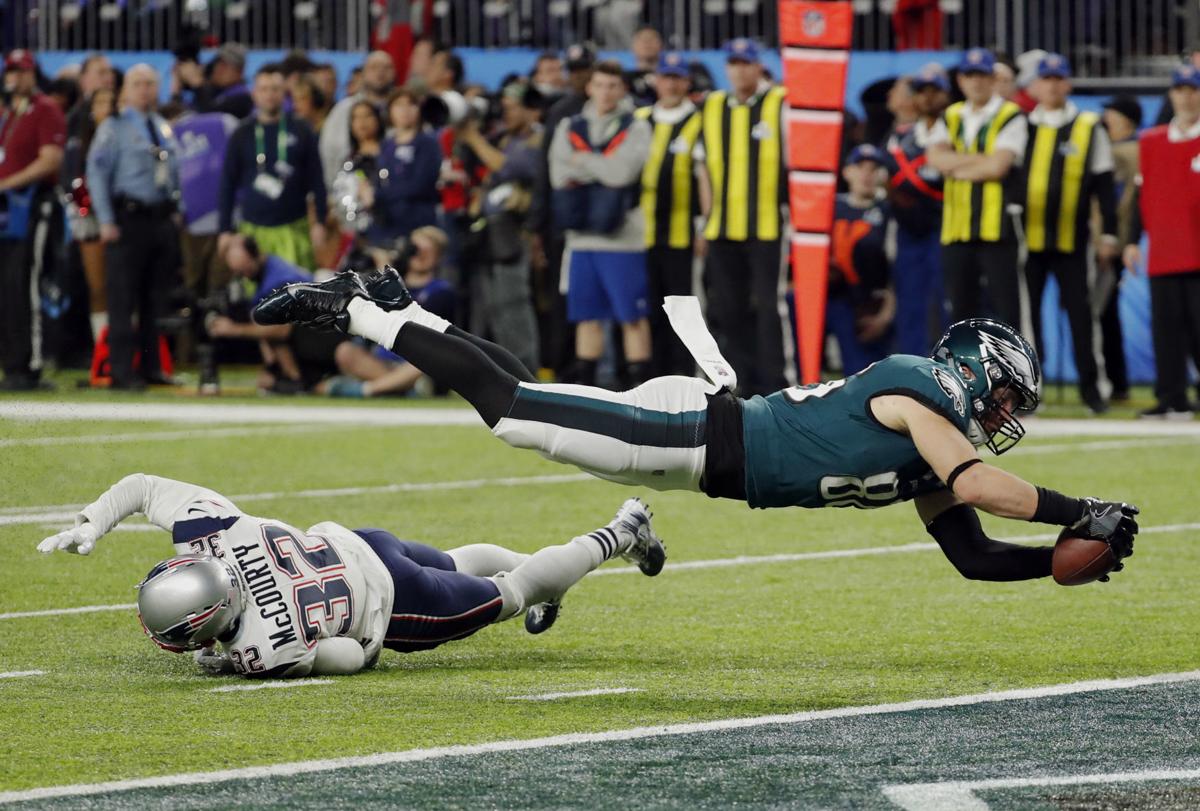 Eagles tight end Zach Ertz dives over Patriots free safety Devin McCourty and into the end zone to finish off a go-ahead, 11-yard reception with 2:21 to play Sunday night in Minneapolis. 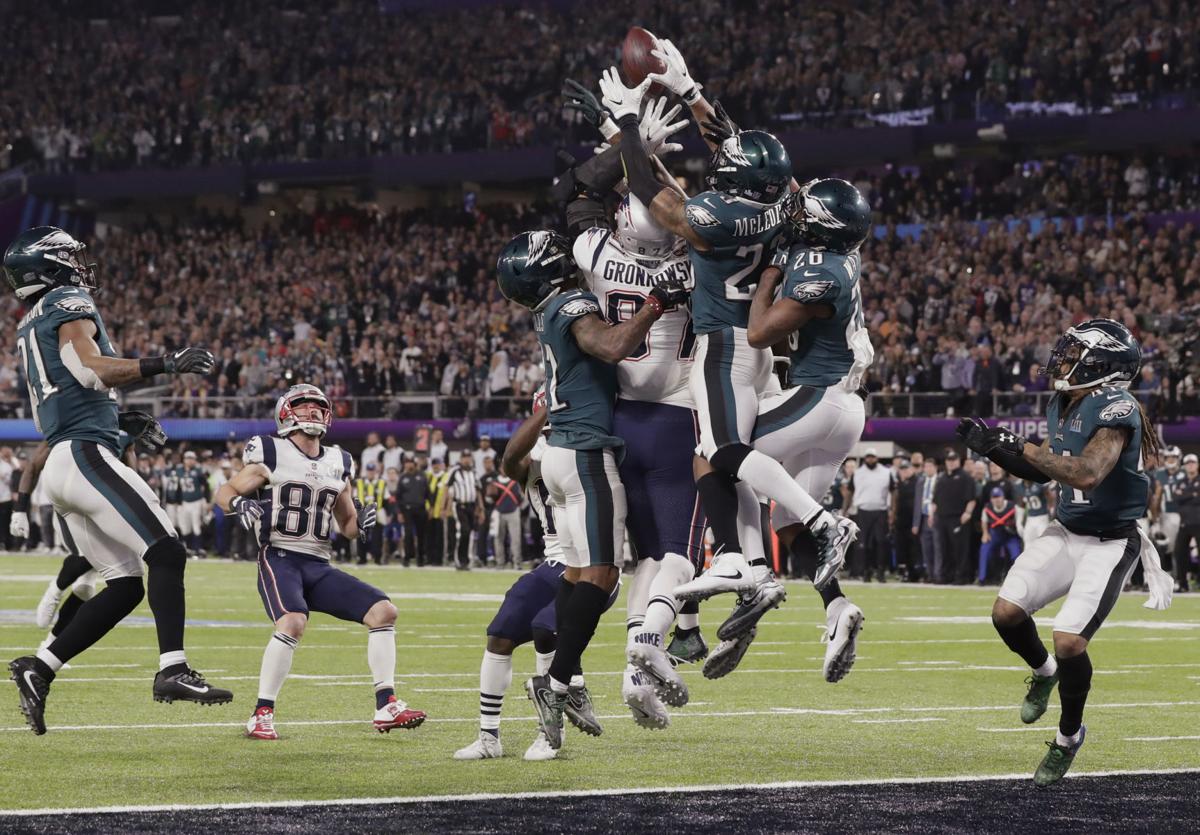 Patriots tight end Rob Gronkowski and a mass of Eagles defenders vie for the ball during the game's final Hail Mary pass. The ball fell incomplete in the end zone.

MINNEAPOLIS — Nick Foles did his best Tom Brady impersonation, leading a late-game comeback to cap a season that began as a backup and ended as Super Bowl MVP.

No quarterback has gone from backup to title game MVP in one season since Brady replaced Drew Bledsoe in the 2001 season. Foles topped the 40-year-old Brady, football's greatest winner, in the most prolific offensive game in NFL history, with the Eagles defeating the favored New England Patriots 41-33.

Foles finished it off by engineering the type of game-winning drive that made Brady famous, and he watched his defense stopped Brady to seal the victory and the Eagles first Super Bowl — their earlier titles came before the Super Bowl era.

"The stage was never too big for him all year," said Zach Ertz, who caught the game-winning 11-yard touchdown pass from Foles with 2:21 remaining. "To get in a shootout with that guy on the other team is probably not ideal for anyone ever. The guy is the best quarterback to ever play the game."

But on this night Brady played second fiddle to Foles despite throwing for a playoff record 505 yards. Foles was nearly as prolific with 373 yards and three touchdown passes and also caught a TD pass for the Eagles (16-3). Brady dropped his own chance at a reception on a trick play by the Patriots (15-4).

That all added up to Foles becoming the first backup quarterback to win the Super Bowl since Brady beat two-time NFL MVP Kurt Warner to win his first title 16 years ago.

Brady never gave up the job he got after Bledsoe got hurt early that season. He has gone on to win a record five Super Bowl titles. After throwing his third touchdown pass, to Rob Gronkowski, with 9:22 to play to give the Patriots their first lead of the game, he seemed poised for a sixth.

That's when Foles stepped up with the drive of his life to give Philadelphia its first Super Bowl title in a season many wrote off after Carson Wentz injured his knee in Week 14.

Foles drove the Eagles 75 yards, converting a fourth-and-1 with a 2-yard pass to Ertz near midfield and then capping it with the pass to Ertz that needed to survive a replay review to make sure Ertz held onto the ball long enough for a score.

"It doesn't get any bigger than this, but I felt good," Foles said. "I felt calm. I think the big thing that helped me was knowing that I didn't have to be Superman. I have amazing teammates."

One of those teammates delivered the key defensive play on a night when the offenses combined for 1,151 yards — the most in any modern NFL game. With Brady poised to lead one of his memorable comebacks, Brandon Graham knocked the ball out of his hand for a fumble that rookie Derek Barnett recovered with 2:09 to play.

"When the fourth quarter came we had to go out there and make a stop," Graham said. "As a defense we hadn't been doing it all game. The offense carried us all the way through. At the end of the day we kept coming."

Jake Elliott tacked on a field goal and the game ended when Brady's desperation heave to the end zone fell to the turf, sending the Eagles out on the field in celebration and Brady to the ground in despair.

The questions after the game immediately turned to the future with Foles expected to return to the backup role when Wentz is healthy. In the other locker room, Brady was asked if he would come back for another run at age 41.

"I expect to be back," he said. "It's 15 minutes after the game ended, so I would like to process this. I don't see why I wouldn't be back."

Brady did just about all he could to win the game, with his most glaring miss coming as a receiver on a trick play in the first half when he dropped a pass from receiver Danny Amendola.

Foles topped him in that role with his touchdown late in the first half that made him the first player to catch and throw a TD pass in the same Super Bowl.

On fourth down from the 1, Foles motioned into the slot, while rookie Corey Clement took a direct snap. Clement pitched to tight end Trey Burton, a former quarterback at Florida. Foles slid into the right side of the end zone, uncovered and caught the touchdown on a play coach Doug Pederson calls "Philly Special."

"Yeah, that was something we've been working on, and Doug and I were talking, and he was like, 'Let's just run it.' It was a good time," Foles said. "And the end was a little wider than I thought, so I was like, 'I really need to sell like I'm not doing anything.'

"And it worked, Trey made an amazing throw. I just looked it in and, yeah, we've repped it for a while, so I was excited to get it run in the Super Bowl."

That gave the Eagles a 22-12 halftime lead but Brady led three straight second-half touchdown drives — two to Gronkowski. Foles kept pace with a 22-yard touchdown pass to Clement and another drive for a field goal that kept the Eagles in it until the dramatic finish.

"It kind of felt like whoever had the ball last could win this game, and we were just fortunate enough to put ourselves in a position to end the game with that drive for the touchdown," coach Doug Pederson said. "Our defense stepped up and did a nice job to finish it for us."

All that was left was the celebration and yet another rendition of "Fly Eagles Fly."

Photos: Eagles fly away with Lombardi Trophy for first time

Nick Foles guided the drive of a lifetime, Zach Ertz made a bobbling touchdown catch that had to survive replay review, and an exhausted defen…

Regardless of who wins when the Los Angeles Rams face off with the New England Patriots in Super Bowl LIII, it will mark the sixth straight ye…

Eagles fly away with Lombardi Trophy for first time

Nick Foles guided the drive of a lifetime, Zach Ertz made a bobbling touchdown catch that had to survive replay review, and an exhausted defense came up with not one but two stands in the final moments Sunday for a 41-33 victory.

After the Eagles’ Super Bowl victory last year and their late-season surge to the NFC semifinals this year, it’s difficult to dispute that owner Jeffrey Lurie saw in Pederson the proper proportion of the qualities necessary to pull off maybe the toughest trick in coaching: to earn pro athletes’ support and respect, to get them to play for you.

Philadelphia's Nick Foles holds up the Vince Lombardi Trophy after the Eagles beat the New England Patriots 41-33 in Super Bowl 52 on Sunday, Feb. 4, 2018, in Minneapolis.

Eagles quarterback Nick Foles, the game's MVP, completed 28 of 43 passes for 373 yards with three touchdowns and one interception. He also caught a 1-yard TD pass.

Eagles tight end Zach Ertz dives over Patriots free safety Devin McCourty and into the end zone to finish off a go-ahead, 11-yard reception with 2:21 to play Sunday night in Minneapolis.

Patriots tight end Rob Gronkowski and a mass of Eagles defenders vie for the ball during the game's final Hail Mary pass. The ball fell incomplete in the end zone.